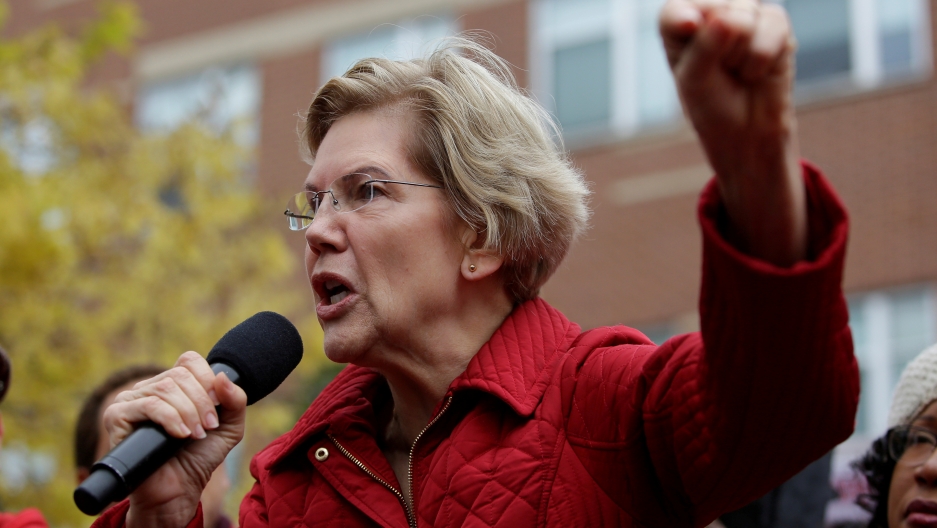 Democratic presidential candidate Sen. Elizabeth Warren speaks as she visits a picket line of striking teachers in Chicago on Oct. 22, 2019.

There is plenty of talk about overhauling our health care system this election season, and, in recent weeks, attention has focused on Sen. Elizabeth Warren’s “Medicare for All” proposal. A majority of Americans (almost 70%) think that cutting health care costs should be a top priority for politicians, according to the Pew Research Center. Warren, a Democratic presidential candidate, wants to do away with private insurance coverage and introduce a government-managed plan, but would her proposal reduce costs if it was implemented?

Christy Ford Chapin, a historian at the University of Maryland Baltimore County and author of “Ensuring America's Health: The Public Creation of the Corporate Health Care System,” believes that the “insurance company model,” on which Medicare is built, is seriously flawed, “whether or not we get rid of insurance companies as administrators.”

The United States spends more on medical care than any other developed country in the world — about 18% of its Gross Domestic Product, which is almost twice the average of other wealthy countries. Prices and administrative health care costs are much higher here. American doctors are typically paid using a fee-for-service model, rather than a fixed salary, and there are few incentives to control costs in a fragmented system managed by for-profit private insurance companies.

Extra health care spending does not mean a healthier population, either. The US lags behind many other wealthy nations on outcomes such as infant mortality and life expectancy, according to statistics from the Organisation for Economic Co-operation and Development (OECD).

For Chapin, the problem with Warren’s “Medicare for All” plan is that while Medicare currently works relatively well for a small part of the population — primarily those who are 65 and older — because it is “built on the insurance company model," she foresees cost problems if everyone in the country is brought on board.

Chapin also thinks that "Medicare for All" will be hard to sell to elderly voters who may worry that bringing so many other people into the program will only make things worse for them.

“When we introduce some kind of universal health care system, it has to be in a way that restructures the market, so that costs come down and...people aren’t as fearful about rationing."

“When we introduce some kind of universal health care system, it has to be in a way that restructures the market, so that costs come down and...people aren’t as fearful about rationing,” she said.

Jonathan Cohn, a senior national correspondent at HuffPost and author of the book, “Sick: The Untold Story of America's Health Care Crisis — and the People Who Pay the Price,” is convinced that forces which have hindered major reform efforts in the past will almost certainly be back.

The importance of winning over interest groups is a lesson that US President Bill Clinton found out the hard way with his failed health care reform effort in the 1990s. President Barack Obama’s Affordable Care Act was ultimately successful because some of the veterans of the Clinton fight learned from the mistakes of the past and worked hard to make deals with different health industry groups and conservative members of Congress, according to Cohn.

Today, organizations including the American Hospital Association and the American Medical Association oppose “Medicare for All.” Nevertheless, the AMA’s fierce resistance to the idea of a single-payer health care system appears to have softened somewhat from the days when its leaders lobbied against US President Harry Truman with cries of “socialized medicine,” as he tried to introduce a national health insurance program after World War II.

The AMA invented our current insurance-based approach back in the 1930s to prevent government-managed health care, according to Chapin. To truly reduce costs, she suggests that legislators must intervene now and “roll back regulations to allow market innovation outside the insurance company model.”