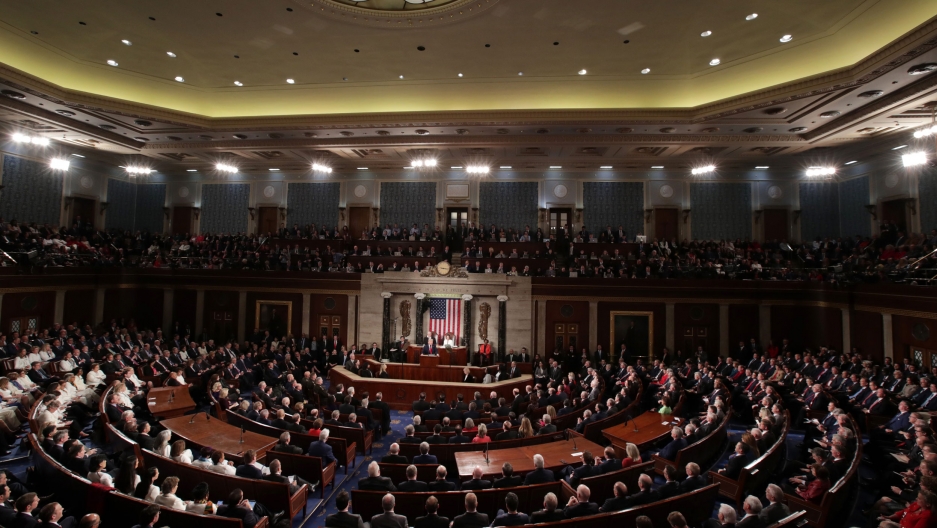 US President Donald Trump makes his State of the Union address to a joint session of the Congress in Washington, DC, Feb. 4, 2020.

Democrats campaigned on healthcare when they won control of the US House of Representatives in 2018. President Donald Trump made plain on Tuesday in the annual State of the Union speech, that he would try to use the issue to his advantage in the 2020 presidential election.

Trump promised to lower health costs for Americans and slammed Democratic plans in an address where Trump made his case for re-election.

"I want you to know: We will never let socialism destroy American healthcare," he said.

But, it was a bitter feud between Trump and Speaker of the House Nancy Pelosi that grabbed a spotlight with Trump denying her a handshake and Pelosi ripping apart a copy of his remarks behind his back.

Trump avoided the subject of his impeachment drama in a 80-minute speech, but the raw wounds from the battle were evident with fellow Republicans giving him standing ovations while rival Democrats for the most part remained seated.

The Republican-led Senate was expected to acquit him of charges he abused his powers and obstructed Congress during a vote beginning at 4 p.m. ET on Wednesday.

Timeline: How Trump was impeached

Seeing Pelosi, for the first time since she stormed out of a White House meeting four months ago, Trump declined to shake her outstretched hand as he gave her a paper copy of his remarks before starting to speak.

Pelosi appeared to be taken aback and avoided citing the customary "high privilege and distinct honor" that usually accompanies the speaker's introduction of the president to Congress.

"Members of Congress, the President of the United States" was all she said in introducing Trump.

When his speech ended, Pelosi stood and tore up her copy of the remarks he had handed her, later telling reporters it was "the courteous thing to do, considering the alternative."

The tension was a sign that little legislative progress should be expected with the presidential election nine months away.

As he began the speech, Republicans from both houses of Congress chanted "four more years" while he stood at the lectern in the chamber of the House.

Democrats sat silently and some could be seen shaking their heads as Trump declared, "The state of our union is stronger than ever before."

Pelosi, who dropped her opposition to impeachment and allowed Democratic lawmakers to seek the charges against him, sat stoically and grim-faced behind Trump and paged through a paper copy of his speech as he spoke.

Trump entered the chamber with Democrats experiencing unease and chaos after technical glitches delayed the results of voting in Iowa on Monday, the first 2020 contest as the party seeks a nominee to face the incumbent Republican.

Trump presented himself as a big improvement over Democratic President Barack Obama, whom he succeeded three years ago, saying he had bolstered US economic growth and increased jobs.

"In just three short years we have shattered the mentality of American decline and we have rejected the downsizing of America's destiny," he said.

The House impeachment managers, acting as prosecutors in the Senate impeachment trial, were seated together at the front of the Democrats' section.

Many House Democratic women wore white for a second year in a row, a sign of the suffrage movement that won women the right to vote 100 years ago. Several Democratic lawmakers refused to attend the annual speech to protest Trump, such as New York Representative Alexandria Ocasio-Cortez.

Trump, using the speech to lay out his vision for a second four-year term, said a Democratic plan to expand government-funded health insurance amounted to a "socialist takeover."

Democratic presidential candidates and many lawmakers have proposed healthcare plans that would be run by the government, a sharp departure from the current, private system in which millions of Americans receive medical insurance from their employers.

Trump's lack of a healthcare plan has left him open to criticism that he has not put enough work into finding a way to reduce rising insurance costs that burden middle-class Americans.

Democratic women stood and chanted "HR 3" — a reference to a Democratic bill that would lower drug costs.

In the televised Democratic response to Trump's speech, Michigan Governor Gretchen Whitmer said: "Democrats are trying to make your healthcare better. Republicans in Washington are trying to take it away."

Trump offered an upbeat portrayal of his presidency in hopes of persuading Americans to give him another four-year term in the Nov. 3 election. He saluted surprise guest Juan Guaidó, the Venezuelan opposition leader, and made cancer-stricken conservative talk radio host Rush Limbaugh an immediate recipient of the presidential Medal of Freedom, with Trump's wife Melania pinning the ribbon around Limbaugh's neck.

Trump also revived his polarizing arguments that migrants should be stopped from crossing the southern US border and that so-called "sanctuary cities" where migrants are protected are wrong. His immigration policies are opposed by Democrats.

Pelosi could be seen shaking her head as Trump spoke of his views on immigration.

After coming close to a broad conflict with Iran after he ordered the killing of Iranian military commander Qasem Soleimani, Trump said, "We are working to end America's wars in the Middle East."