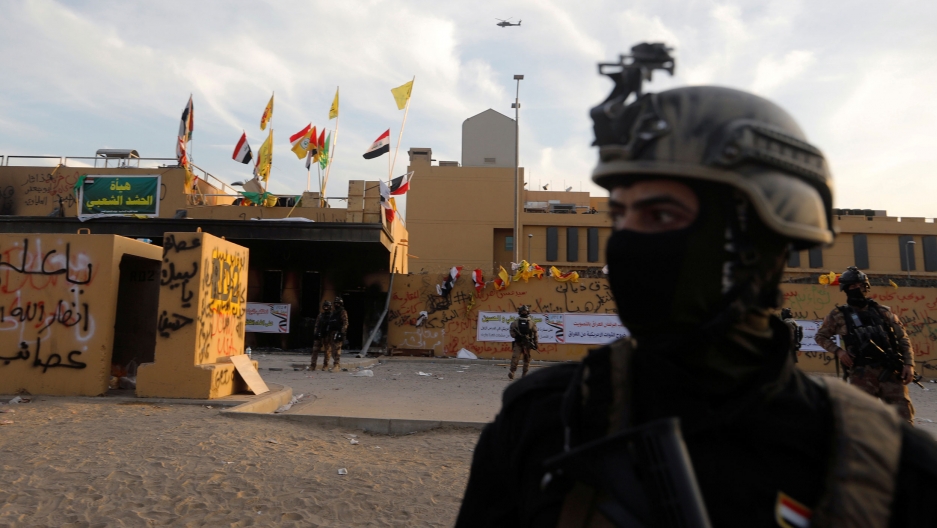 Members of Iraqi security forces are seen in front of US Embassy during a protest to condemn air strikes on bases belonging to Hashd al-Shaabi, in Baghdad, Iraq, on Jan. 1, 2020.

Supporters of Iranian-backed Iraqi paramilitary groups who stormed the US Embassy's perimeter and hurled rocks in two days of protests withdrew on Wednesday after Washington dispatched extra troops and threatened reprisals against Tehran.

The demonstrators, angry at US airstrikes against the Tehran-backed Kataib Hezbollah group that killed at least 25 people, threw stones at the building while US forces stationed on the rooftops fired tear gas to disperse them.

But by mid-afternoon, most appeared to have obeyed a call to withdraw, issued by the Popular Mobilization Forces (PMF) umbrella group of a mainly Shia militia, which said the demonstrators' message had been heard.

Tensions may be easing around the US Embassy in Baghdad, but the underlying concerns about an escalation of the violent rivalry between Iran and the United States have not gone away.

So how do Iraqis feel about being caught in the middle? Businessman and consultant Hassan Hadad spent much of his life in Canada, but returned to Iraq in 2013 to start anew.

He discusses Iraqi politics and life amid the violence with The World's Carol Hills.

Carol Hills: What's your opinion of Kataib Hezbollah, the pro-Iranian militia group, and [Tuesday's] blockade of the US Embassy?

Hassan Hadad: A lot of us have said that targeting diplomatic missions is incorrect. We said this when the Iranian consulate was targeted last month in Karbala, and we said the same thing when the Iranian consulate in Najaf [was] targeted. So, that's just wrong. I mean, you can't go after somebody's diplomatic mission, whether it's an embassy or consulate. Those are off limits. And so the biggest losers in yesterday's attack against the US Embassy will be the Iraqi people and the Iraqi government, because it is the responsibility of the Iraqi government to protect these sites.

What about the militia groups, other violent attacks on US military targets in Iraq over the past few weeks and the reprisal against the death of the American contractor?

Earlier this month, the US administration did say that if any American is targeted and killed, that they would respond. This, of course, was a dream come true for the extremists within the Iranian government. You know, they are not monolithic either, because you've got the more moderate side and then you've got the more extremist side. You know, the Revolutionary Guard Corps. So, those guys are itching for a fight with the Americans. And so when they gave that ultimatum or that threat, "If you kill any American, we'll come after you," the Iranian aligned militias took the bait and they targeted K1 in Kirkuk. Previously, they had tried to target the Americans here in Baghdad, near the airport. So they've been trying time after time to get Americans. They unfortunately did get their target in Kirkuk, which led to the American strikes against KH [Kataib Hezbollah].

What about Sunday's US attacks in Iraq and Syria, which killed a number of Iraqis on Iraqi soil? What about that particular move by the US?

That is an escalation of the so-far Cold War between the Americans and the Iranians. And it's not a good escalation because Iraq is caught in the middle. And we see that with that strike. It was Iraqis on Iraqi soil [who] were targeted. If things continue to escalate, it will be the average Iraqi that bears the brunt. And that is not something that we Iraqis want after several years of wars and sanctions and terrorism and most recently the war against ISIS, we started to breathe a little bit better and to live with a sense of normalcy that's coming undone now with these escalations between the Americans and the Iranians. So, you know, everybody in the government, most people on the street have said, "If you can just take this fight away from our neighborhood and just do it somewhere else, if you need to fight, don't do it here, because we know what the repercussions will be."

In your opinion, how serious a moment is this for Iraq and its relations with the US?

I think this is a very serious moment. It's not an ultimatum where the Iraqi government has to decide if it's going to continue having relations with the United States or with Iran. Iran is going to be our neighbor. It's not like we can up and move and go somewhere else. So we need to have friendly relations with all six countries that surround Iraq; Iran being one of them. At the same time, we don't need to say "no" to the United States. We do have joint interests in terms of trade, economics and things like that. And we can have a balanced relationship between both. It's not either or and it's not zero-sum.

I think it's fair to say that you've been generally supportive of the US mission in Iraq over the years, is that right?

I'm supportive of Iraq becoming a democratic country that has its sovereignty respected and can stand on its own two feet if that is done by aligning ourselves with the United States or if that is done by aligning with Iran — I think the ends justify the means. However, having been in this country for several years, I can tell you that we cannot stand on our own two feet without having friendly and balanced relations with all, including the United States.

So how far is Iraq from standing on its own two feet?

I think we're two generations away from that. And I am an optimist. But I think in order to get to that point, there is a lot of serious hard work that needs to be done. And these sorts of geopolitical games that lead to Iraqi lives being lost is a waste of time and our blood and so, if we're serious about standing on our own two feet, we need to, you know, just put our heads down, get to work. That way, our children's children can have a better future than we do.

There have been mass protests in Baghdad over the past few months against corruption and to some extent, against Iranian influence. What's your opinion of them? These protests are totally different from what's been going on with this Iran-backed militia.

The protests started three months ago on Oct. 1, and it's been a mix of demands that people have been seeking. One of them being combating corruption because corruption is so rife in this country. And so people are tired of that. They just want to have good health care, a good education system and to have a job that, you know, they can look forward to.

And you support them?

Of course. These are Iraqi youth who want a better future. At the core of what they're saying is, if you were to go out and ask 10 protesters what they're looking for, you're going to get 10 different answers. What it all boils down to is they want somebody who's a national leader, who's got a clear vision for the country, which will inspire hope. We're missing those three things: National leadership, a clear vision — and hope.

Hassan, how have the events of the past couple of weeks affected you personally?

I mean, on a practical level, there are streets that are closed. There are days where kids can't go to school, teachers can't make it to class — things like that. So, practically speaking, life has been disturbed since Oct. 1. It is hoped that all of this disturbance and sometimes nuisances are for the greater good, which is a better future than we've had. So people, if they think big picture, they're not too disturbed by it. But on the day-to-day, it's quite difficult on the day-to-day level to do a simple task like go shopping or get to work.

Are you committed to staying in Iraq forever?

Yes. I don't have any tickets booked to go back home yet. This is home.