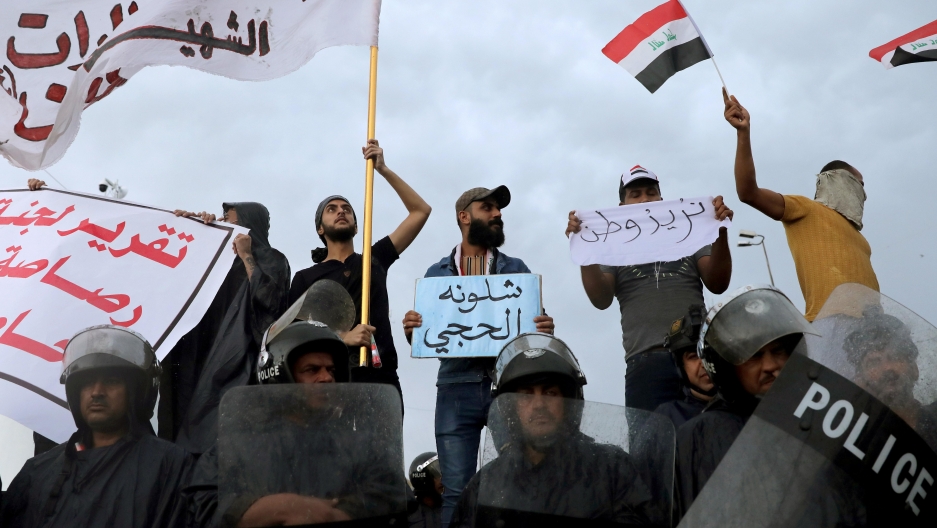 Iraqi policemen stand in front of demonstrators during a protest over corruption, lack of jobs and poor services, in Kerbala, Iraq, on Oct. 25, 2019.

At least 40 protesters were killed in Iraq on Friday when security forces used tear gas and an Iranian-backed militia opened fire to try to quell renewed demonstrations against corruption and economic hardship, security sources said.

A government intelligence officer and a member of the powerful Asaib Ahl al-Haq militia were killed in a clash with protesters in the southern city of Amara, police sources said.

More than 2,000 people were injured nationwide, according to medical sources and the Iraqi High Commission on Human Rights (IHCHR), as demonstrators vented frustration at political elites they say have failed to improve their lives after years of conflict.

Sirens wailed and tear gas canisters landed amid groups of young protesters draped in Iraqi flags and chanting "with life and blood we defend you Iraq."

The bloodshed is the second major bout of violence this month. A series of clashes two weeks ago between protesters and security forces left 157 people dead and over 6,000 wounded.

The unrest has broken nearly two years of relative stability in Iraq, which lived through foreign occupation, civil war and an ISIS insurgency between 2003 and 2017. It is the biggest challenge to security since ISIS was declared beaten.

Sinan Antoon is an Iraqi writer and poet. He was in Iraq earlier this year and says life has become unbearable for citizens there. He spoke with to The World's host Marco Werman from his home in New York City about the unrest in Iraq.

"What motivates these young men and women in Iraq is that Iraq is one of the richest countries in terms of its oil reserves, yet they're not getting anything out of that, which is simply not fair. So, it's about justice and dignity."

"What motivates these young men and women in Iraq is that Iraq is one of the richest countries in terms of its oil reserves, yet they're not getting anything out of that, which is simply not fair. So, it's about justice and dignity," Antoon said.

Marco Werman: What do they actually want?

Sinan Antoon: They actually want this entire political system to go away. They want the government to resign. They want new elections. They want a new constitution. I mean, there have been using the slogan that we've seen in other Arab revolts, which is they want the "fall of the regime." They are fed up and tired and have lost all hope that this regime can actually reform itself.

I mean, despite the stance by the Iraqi government, they also are concerned about the future. Laith Kubba, an adviser to Iraq's prime minister, said that if the government did not act to meet some of the demonstrators' demands, the government might not survive.

I do believe if the promises and the pledges are not met and if there is no significant shift in its politics, I think this government will be forced to resign.

Just yesterday, you wrote an item for Al Jazeera where you said that the Iraqi political system is "beyond reform or repair." Why do you think that is?

Because since 2002, I mean, I've been hearing and Iraqis have been hearing and seeing these people talking about building a new state and so on and so forth. And last night, the Iraqi prime minister gave a speech where he said, "We promise to build a modern state." I mean, it's been 16 years. So, if a group has 16 years and it has not delivered anything, that's it. This system is corrupt. It has a congenital defect from day one, from 2003 in the US occupation, putting in place an ethnosectarian system and populating the regime with people, many of whom have no constituency inside Iraq.

So, you've got this novel out, "The Book of Collateral Damage." I'm wondering if there's anything in this book that speaks to, you know, what's happening right now in Iraq with these protests — so many young men frustrated with lack of jobs, opportunities and, of course, the political corruption in the system there.

Yes. I mean, the novel has two characters, one, an Iraqi living in New York and another, an Iraqi living in Baghdad who has to suffer and survive war and the aftermath of war and everything that dictatorship and then the US occupation and the regime it put in place has brought. And so living with the continuous death of loved ones. And there is this one part where a character is elegizing his loved one who died in a terrorist attack, which is part of the corruption that these young protesters are angry about. So, I'll just read a bit from "The Book of Collateral Damage."

I chose this excerpt, in particular, because in the last 12 hours, the Iraqi regime or its militias have killed two young men who are just demonstrating peacefully and is using all of its power to suppress all of these young men.

An English translation of an excerpt from "The Book of Collateral Damage":

For years, death and destruction have taken turns slapping us and our cities every morning. They erase all names, the names of places and loved ones, one after another. Sometimes, they erase them with the blood red color that leaves wounds open, at others, with the black that blocks out the Iraqi sun and makes its long night even longer. Yes ... You saw Iraq when its night was long, and now it's longer than ever. A night that now descends sadly on your street, which they have stabbed with fire, along with my friend who lived in its heart. ... Another name to be added to the thousands upon thousands of Iraqi dead. Marching into the twilight of oblivion and silence. But wait. Do I not have the right to stop the procession for a few minutes to bid farewell to my friend?

This interview has been lightly edited and condensed for clarity. Reuters contributed reporting.