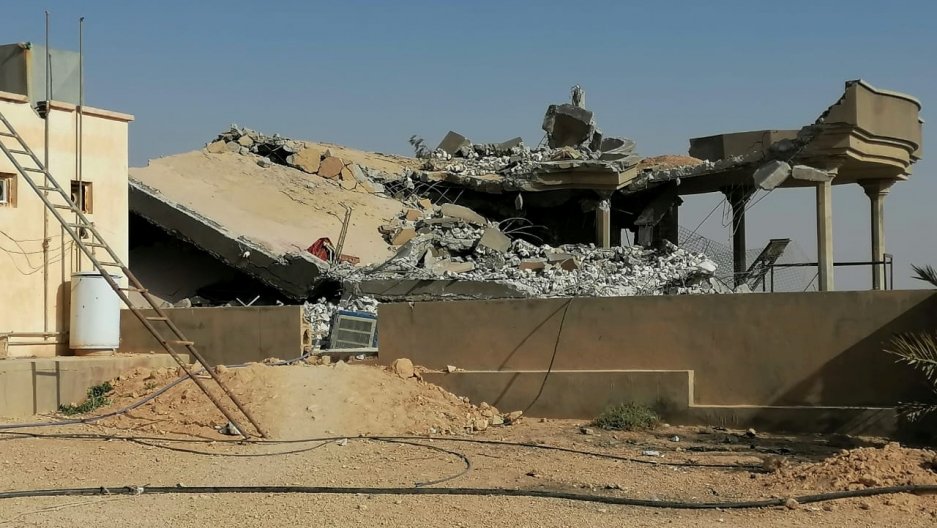 The destroyed headquarters of the Kataib Hezbollah militia group are seen after an airstrike in Qaim, Iraq, Dec. 30, 2019.

On Friday, an Iranian-backed militia group attacked a US base near Kirkuk, Iraq, known as K1. One American contractor was killed, and US military personnel were also wounded.

The US Air Force responded Sunday with five different attacks in Iraq and Syria. The Iranian-backed militia says the US airstrikes killed 25 people.

It's the first time US forces have struck pro-Iranian groups inside Iraq in almost a decade.

Carol Hills: You were once stationed at this US base that was attacked. It's known as K1. It's near Kirkuk. Obviously, it's been a long time since you were there, but what does it look like and what makes it special? Why is it there?

John Spencer: I was there back in April of 2003 in the invasion of Iraq. I was an Army paratrooper. We jumped in the north and then moved our way south to Kirkuk, and K1 was a very large army airfield at the time. Any airfield is important to any military as it's the method of getting supplies in and out that you need to conduct operations. And it's a big piece of ground where you can train military forces. It's very open, so I could see how easily somebody could get rocket systems near the base and then strike it pretty easily.

So, it's still a very active base?

Yes, and that's where clearly, because of the unfortunate casualties, there are American forces stationed there, assisting in ongoing operations for ISIS and in training Iraqi military forces on the behest of the Iraqi government.

Yeah. We have to be careful of words. So, yes, some people immediately flash to the Blackwater incident in Iraq. But there are more. There have been more contractors in both Iraq and Afghanistan than troops on the ground. "Contractor" can mean everything from private security contractor, which is what most people think of, or it can mean the person that's delivering the food or the gate guards.

Are all contractors for the US military American or not?

There are some that are local nationals hired for different projects and then some third-country workers. I remember when I was in Iraq, and if we went to a dining facility, there was always some third-country security guard before we could go in and go get our food.

Now, why do we have contractors? I mean, this is a war zone, — why doesn't the Pentagon use regular military personnel?

By definition, is a contractor hired by the US military doing something that its own military can't do?

No, not necessarily. It's just a way to outsource a certain function, usually not a security function. We in the US don't want that military function, like shooting, and making life-and-death decisions, being a contracted function. There've been a lot of leaders that have said, "That would be very negative if we outsource that."

So, that doesn't happen currently?

That does not currently happen, but with lots of caveats. Depending if you have a US troop on the ground, he is going to be supported in many functions by a contractor. Not always, but in a lot of situations, whether that's intelligence support, logistical support, or keeping the radios on. A lot of those functions involve heavy contractor support.

Related: On Israel's 70th anniversary, a lament: 'The Jewish community in Iraq is no more'

What's the difference between contractors and mercenaries?

Great question. I'm sure people would argue on this. I define the difference as a "mercenary" is an armed individual that a government has paid to achieve its security interests. So, when I think mercenary, I think back to European and Western armies which were all mercenaries and you bought armies and then they went in and fought your wars for you. Today, you could argue that in Afghanistan. We're trying to achieve a national objective, and there's more contractors than there are US troops. But that vital line of sending a troop to go destroy an enemy, let's say, that person should not be a contractor. Then to me, he becomes a mercenary. You paid him to go kill or hurt or do things for you that US soldiers should be doing.

There are ethical issues here, too. These contractors are just as likely as soldiers to get hurt or sick or killed. So, do these men and women get the same benefits as regular guys?

No, they're private companies. So, depending on which company you work for and what function you're doing, if you get injured, then it's a private company that has workers' compensation and all that. They're not US soldiers, so they don't get all the benefits that a US soldier would get to include even after service, such as Veterans Affairs and all that. These are private companies. Although drawing the line of where the combat zone is in the modern day is so difficult. But if you're injured, and you're working for a private company, you're not going to get the benefits that a US soldier would. That's a major difference. They assume a lot of risk in doing what they're doing over there.