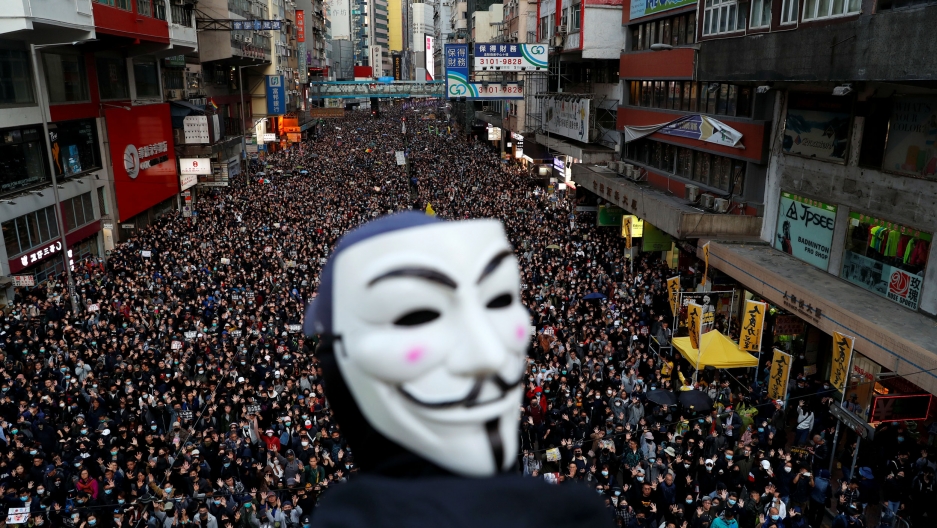 When this decade began, the world was still emerging from the 2008 global economic collapse. There was a perception that a few elites held all the power, said Zachariah Mampilly, an international studies professor at the City University of New York.

“There's a sense that there has been a tremendous increase in inequality around the world,” he said. “There is increasingly a lack of faith in government. That national governments in particular are no longer able to craft solutions to some of the more extreme central problems that we face as a species.”

What followed the financial crisis was an unprecedented era of civil resistance that touched every continent. There were initial successes for protesters, but as the years wore on, governments responded in increasingly authoritarian ways. And as 2020 dawns, some experts are questioning whether nonviolent protests are as effective as they once were.

It all started with one person, in Tunisia. Fruit vendor Mohamed Bouazizi snapped when officials tried to confiscate his cart. He set himself on fire, setting off demonstrations nationwide — and the Arab Spring across the region. Demonstrators forced the Tunisian and Egyptian presidents from power. Then the Occupy movement swept the globe.

After that, there were too many major demonstrations to list. Among them: Black Lives Matter; #MeToo; civil unrest in Syria, Sudan and Chile; and global protests for action on climate change.

“Globally speaking, we live in the most contentious time in recorded human history as civil resistance goes,” said Erica Chenoweth, a human rights and international affairs professor at Harvard's John F. Kennedy School of Government who has studied every reported instance of civil resistance back to 1900. “This is a way that people try to get what they want when they don't feel like the normal political process is operating in ways that can accommodate their demands.”

And, she said, it’s had an impact.

“If you look at a movement like Occupy, which many people called a failure, the truth is that the agenda that was set by Occupy — that is a focus on inequality — was taken up by basically everyone.”

“If you look at a movement like Occupy, which many people called a failure, the truth is that the agenda that was set by Occupy — that is a focus on inequality — was taken up by basically everyone,” Chenoweth said.

Related: Protests that rocked the world in 2019

But governments have fought back. In Sudan, the military executed a brutal crackdown. In Kashmir, India cut off the internet.

“We see an increasing number of movements at the same time that we see a documented decline in democracies around the world and an increase in authoritarianism.”

“We see an increasing number of movements at the same time that we see a documented decline in democracies around the world and an increase in authoritarianism,” said Hardy Merriman, president of the International Center on Nonviolent Conflict.

And, he said, nonviolent civil resistance isn’t as effective as it used to be.

“The success rate of nonviolent movements is declining,” Merriman said. “Part of that could be because there are an increasing number of violent flanks alongside these movements.”

Another part might be the changing role of the US.

“We will seek friendship and goodwill with the nations of the world,” said US President Donald Trump at his 2017 inauguration. “But we do so with the understanding that it is the right of all nations to put their own interests first.”

Historian and former provost of the University of Melbourne, Peter McPhee, said Trump’s withdrawal from the Paris Climate Accord, the Iran Nuclear Deal, and the International Criminal Court have led other countries to believe they, too, can act without facing international repercussions.

Related: Power outage: How did global leadership change in 2019?

Protesters are adapting, said Professor Dawn Brancati, a scholar at the MacMillan Center for International Studies at Yale University, who has taught Nathan Law, one of the leaders of the movement in Hong Kong. She said civil resisters in Hong Kong have learned how to keep a movement cohesive, and how to evade the police, even as demonstrations spread.

“In terms of sheer numbers, there's two million people in a single day on the streets of Hong Kong,” Brancati said, adding that Hong Kong entire population is more than 7 million people. “It's phenomenal.”

And, Brancati said, like other protesters earlier in the decade, those in Hong Kong haven’t been deterred by a government crackdown.

“Even when authoritarian regimes crack down on protests, the protesters keep going in the streets, which is why I admire their courage and guts.”

“I have no idea how it would end, but the movement (is) already radiating and influencing… other regions to act,” Nathan Law, the Hong Kong protester, said in an email. “It means so much to democracy in a global spectrum.”