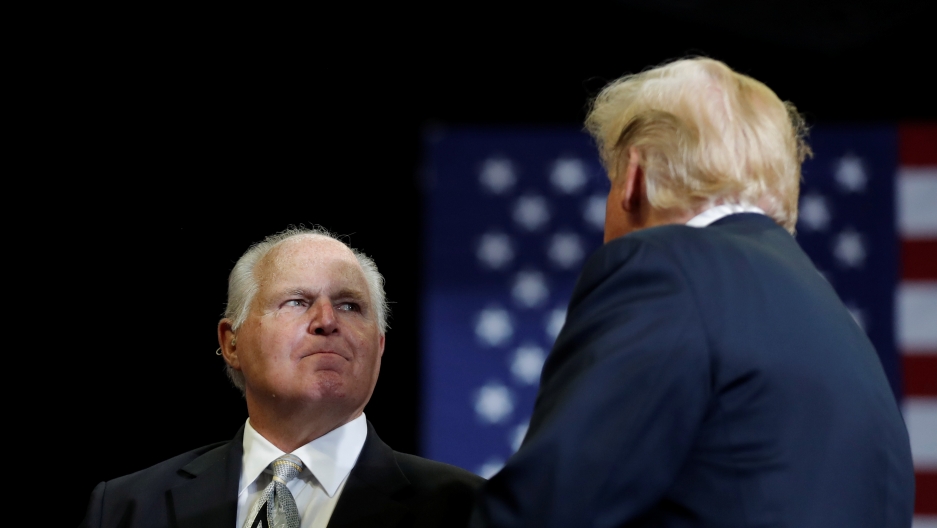 Talk show host Rush Limbaugh introduces US President Donald Trump on the eve of the US mid-term elections at a campaign rally at the Show Me Center in Cape Girardeau, Missouri, US, on Nov. 5, 2018.

Back in the early 1980s, AM radio wasn’t doing too well. Music sounded better on FM, and listeners had been migrating to FM for years. So, if you owned an AM station, what — or who — could save you?

According to Brian Rosenwald, a scholar in residence at the University of Pennsylvania and author of the book, “Talk Radio’s America: How an Industry Took Over a Political Party That Took Over the United States,” Limbaugh’s show was a game changer.

“He completely revolutionized and reshaped talk radio. What we hear today on AM radio all over the country, and even some of the podcasts and cable news, owes itself to the style that he pioneered,” said Rosenwald.

In the 1970s, Limbaugh worked as a music DJ on a variety of local radio shows and was repeatedly fired for missteps on the air, including insulting people’s looks. Despite all of this, he was tapped to start a new show on AM radio as part of an effort to save the medium.

“He comes along and he revolutionizes the idea of what succeeds in talk radio ... He’s a cultural phenomenon,” Rosenwald said.

Part of what made Limbaugh’s program so appealing to listeners was his emphasis on putting on a good show. While the show certainly had a conservative bent, what mattered most, according to Rosenwald, was entertainment — or, in this case, “infotainment.”

“As talk radio takes off, what sounds good on the air, what makes for good, entertaining radio is not saying, ‘Well, they had to cut a deal over this because the debt ceiling has to get raised and there’s divided government,’ and all that stuff. It’s not fun.” Rosenwald explained. “Nuance is boring, basically. And what isn’t boring is saying, ‘Those Democrats are a bunch of socialists trying to destroy America,’ and playing to people’s emotions.”

Related: Audiences love the anger: Alex Jones, or someone like him, will be back

Granted, Democrats are not the only targets for the show. Republicans, especially so-called R.I.N.O.s (Republicans In Name Only), become targets for Limbaugh and his audience as well, and the party takes notice.

“The thing to understand about [the] hosts,” Rosenwald said, “is that their number one priority is to do the best show possible … The second priority is they’re conservatives. The third priority is that they’re Republicans. That comes last.”

What this translated into was a willingness to call out Republican politicians for, in their eyes, not fighting hard enough for conservative values — and when Limbaugh or other conservative radio hosts said listeners needed to do something about it, they listened.

This gave talk radio a lot of power. It wasn’t acting as a mouthpiece for the Republican Party; it was setting the agenda and politicians were listening.

Ultimately though, even after the 1994 Republican Revolution, and George W. Bush’s election in 2000, Limbaugh’s listeners were still dissatisfied. In their opinion, Republicans continued to stray too close to the center, and voters were ready for a new champion of their conservative causes.

For years, Trump had been a mainstay on conservative radio shows such as “The Laura Ingraham Show.” And he had learned a lot from his favorite AM hosts.

Rosenwald said that, for fans of those shows, with Trump they felt like, “We finally got a guy who sounds a lot like the hosts who have been fighting for us, and he really is preaching from the talk radio hymnal.”

Related: America is divided — and that's by design

Putting all those pieces together — mobilized conservative voters, a frustration with establishment politicians, and someone who came across as a fighter — provides a new (and often unexamined) context for President Trump’s ascent to the White House.

And it all comes back to AM radio.