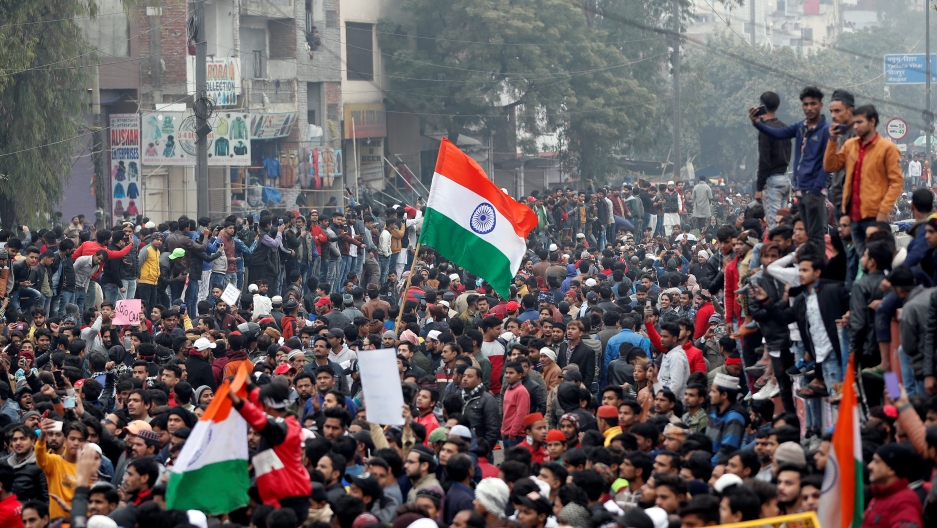 Thousands of people took to the streets in India again on Wednesday against a new citizenship law based on religion that has touched off violent unrest, and a southern state imposed curbs on public gatherings to pre-empt further demonstrations.

Prime Minister Narendra Modi's government says the Citizenship Amendment Act (CAA) is intended to address the persecution of non-Muslim minorities such as Hindus, Sikhs and Christians from Afghanistan, Bangladesh and Pakistan.

Those groups, many of whom have been languishing in India for years without rights, will now get an automatic path to Indian nationality if they came from these three countries before 2015.

India's Supreme Court turned down a plea on Wednesday to halt implementation of the law but said it would hold hearings next month on the sweeping measure, which critics have described as anti-Muslim.

Protesters say the exclusion of Muslims betrays a deep-seated bias against the community, which makes up 14% of India's population, and that the law is the latest move in a series by the Hindu nationalist government to marginalise them.

With more demonstrations likely, authorities in the southern state of Karnataka have moved to ban large public gatherings in at least three major cities, a police official said.

The restrictions will come into force on Thursday morning, including in the state capital Bengaluru where offices of dozens of multinational companies including Walmart Inc's Flipkart, Uber, Infosys and Wipro, are based.

The World's Marco Werman, spoke with journalist and author, Rana Ayyub, who will be protesting Thursday in Mumbai, the home of Bollywood. The Indian film industry is starting to speak out for the first time against anti-Muslim discrimination in the country, Ayyub says.

Marco Werman: I saw the other day that there were some Muslim students in Delhi who were upset that Muslim Bollywood stars were not speaking out, but they are now?

Rana Ayyub: That's right ... The Indian film industry actors have not really [been] known to be political. They never make any controversial statements. They never go against the government of the day. But they also have, this time, decided to come out in the streets to protest. This was unexpected and very heartening to see them stand shoulder to shoulder with fellow Muslims.

The Bharatiya Janata Party (BJP), the ruling party in India, has a stated goal of Hindutva. What is that?

The ideological body of the BJP is Rashtriya Swayamsevak Sangh, or RSS, which derives a lot of its inspiration from Nazi Germany. The RSS believes in Hindu supremacy. It believes that, after the partition of India, if Pakistan was created for Muslims, then Muslims should be treated as second-class citizens and the concept of secularism should be removed from the Indian Constitution. So, ever since this government has come to power, it has been taking decisions to appease the Hindu majority. Everybody's been calling the Citizenship Amendment bill a distraction from the economic failures. It is not. It is basically a project of Modi's fascism. The "Hindu Rashtra" (Hindu Nation) is basically a country which will be for Hindus where Hindus will have the first take to all the resources in the country.

The government in Delhi says it remains committed to the democratic ideals of India and that this law is intended to help minorities in neighboring countries. What makes you so skeptical?

Related: Gambia brought Myanmar to The Hague 'in the name of humanity'

So — Hindutva, the Kashmir status being revoked earlier this year, a citizenship and immigration law that discriminates against Muslims — for you, as a Muslim in India, Rana, what are you afraid of right now?

Many of us are privileged Muslims who have resources to leave the country tomorrow, if one really gets to that stage. But 80% of the Indian Muslim population lives below [the] poverty line and they have been living in fear. We had an 80% rise in hate crimes against Muslims between 2014 and 2019, when Muslims were lynched on suspicion of eating beef, Muslims were lynched on suspicion of marrying a Hindu girl. So, every day there is an attack on their religious identity. So it's become difficult to live as a Muslim, as a self-respecting Muslim, in the Indian democracy ever since Narendra Modi has come to power.

Related: One month after crackdown, protests continue in Kashmir

Has this been a constant tension in your life in India? Did you have Hindu friends in school?

Yes, of course. I was raised in a very cosmopolitan society, but very early on in life, when I was about 9 years old, the [1992] Bombay riots took place and me and my family had to leave overnight because rioters attacked our house. It was one of the first [and] biggest anti-Muslim riots in the country. So, at a very early age in my life, I was given a religious identity, as much as I did not want to. You became very aware of where you stood as a Muslim in the country. And the BJP and the right wing have been fueling this anti-Muslim narrative since the partition of the country in 1947.

Some of my closest friends are non-Muslims. But every day in your life, you see discrimination because of your surname. As a Muslim, personally and as a journalist, I have seen the discrimination from close quarters. But despite that, me and many Muslims like me, place our faith in the secular democracy, where many non-Muslim have come forward to protect us in the times when we need them, especially at a time like this. When the country is protesting, you see there are many non-Muslims called out in the streets to protect the interests of fellow Muslims in the country, and that's very heartening because despite the hate that the leadership has been trying to spread in the country, there are still some sane voices who are protecting the interests of fellow Muslims. But we all fight to ensure that we give a better India to our future generations.

Given past conflagrations of violence between Hindus and Muslims — Gujarat and Mumbai — the situation right now is worrying. Where's it all headed, do you think?

I remember when the Bombay riots happened, we thought it's going to be an aberration, it's not the norm. And then the Gujarat riots happened and we saw the devastation at close quarters. About a thousand Muslims were killed overnight. And then you saw the same person become the prime minister of the country despite his role in that carnage. So, Muslims were always apprehensive that Narendra Modi becoming the prime minister of the country would mean trouble for them, would mean that the fascist project of RSS would actually be realized. And that's exactly what's happening. It's a bleak future for the secularism of this country because our forefathers who fought for the freedom struggle of India fought for the syncretic culture of this country and not for a Hindu nation. And that's where we dread we are heading forward to. This damage could be irreversible to India's secular fabric.