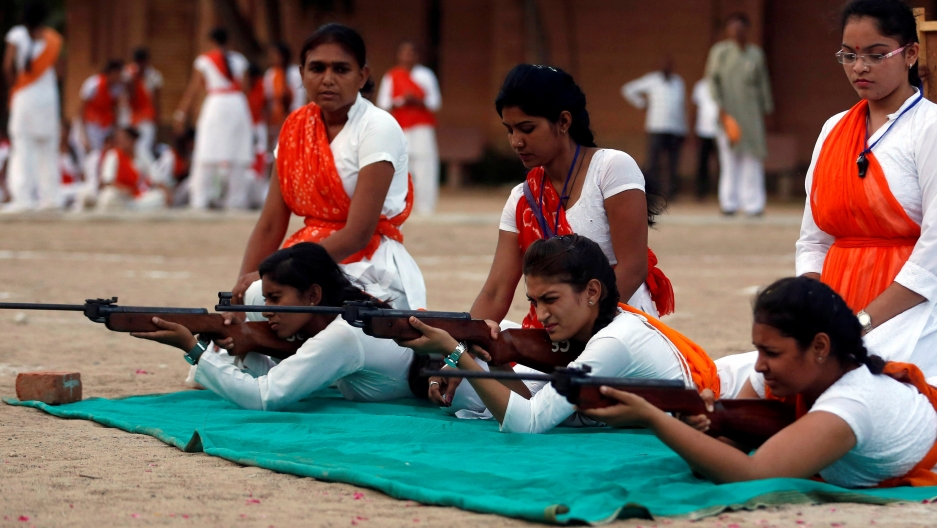 Members of Durga Vahini, the women's wing of hardline Vishwa Hindu Parishad, show their self-defense skills with firearms at the concluding ceremony of a weeklong women's training camp on the outskirts of Ahmedabad, India, May 21, 2016.

In an office in the northern city of Varanasi, India, a group of women dressed in bright sarees work as trainers for Durga Vahini, a Hindu nationalist organization. They wear the traditional accessories of married Hindu women — a pinch of vermillion spread through their hair parting, a red bindi on their forehead, and glass bangles. Together, they have vowed to take up arms to protect Hindu identity in India — and train women, some as young as 15, to do the same.

Under the pro-Hindu nationalist government of Prime Minister Narendra Modi, hate crimes, particularly against Muslims, have surged, and violence against religious minorities has spiked. Yet, the women of Durga Vahini believe that Hindus face the real threat. Their manifesto is to provide “solid support to the Hindu society and culture by ending all types of insecurity, unrighteousness, immorality and inequality among Hindus.”

Related: Women are becoming 'electable' in India — even when they don't win

Durga Vahini was founded in 1991 when Hindu nationalists launched a campaign to construct a Hindu temple at Ayodhya, the site of a 16th-century mosque. Hindus claimed the site was the birthplace of Lord Rama, a Hindu god, and destroyed the mosque in 1992. After nearly 30 years, on Nov. 9, in a unanimous verdict, India's Supreme Court ruled to grant the holy site to Hindus.

Yet, Rita Singh, who joined Durga Vahini when she was 18, says she has no doubt that Hindus in India are under threat due to Muslim population growth, a message conveyed consistently in Durga Vahini. “Where will we go as Hindus?” Singh asked. 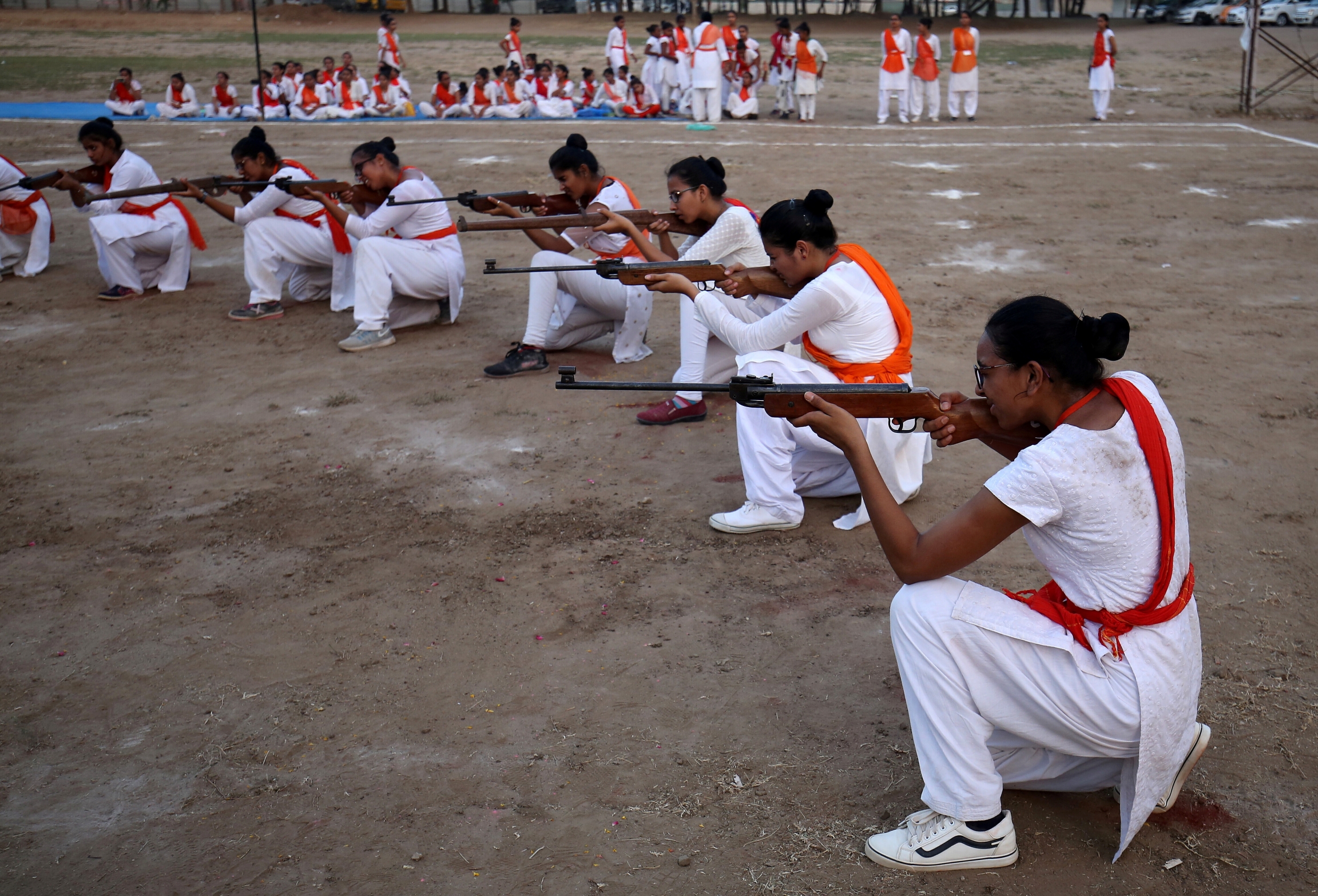 Members of Durga Vahini, a Hindu nationalist organisation, show their self-defense skills with firearms at the concluding ceremony of a weeklong women's training camp on the outskirts of Ahmedabad, India, May 25, 2019.

The majority of Durga Vahini members come from traditional backgrounds as Hindu wives and mothers. After joining the group — often through a close relative or friend — some say they find voice, solidarity and empowerment as protectors of Hinduism.

Their name literally means the “army of Durga,” after the fierce Hindu goddess known to protect society from evil. Since 1991, the group has amassed 35,000 women across 29 states who have agreed to “launch” India on a “path of progress” — by any means necessary.

Training camps last 10 to 15 days and usually take place during the summer months across different cities in India. Durga Vahini inducts women between the ages of 15 to 35 for training broadly organized to meet three goals: sewa (service), suraksha (security) and sanskar (cultural heritage).

In boot camp-style training, girls wake up at 4:30 a.m., shower and get ready for classes that start at 6. The day starts with morning prayers, followed by activities like physical exercise, cultural training, history classes, self and national defense. As part of this training, young women learn how to shoot a gun.

During camp, cellphones are confiscated and trainees are not allowed to communicate with the outside world, including their families.

Durga Vahini trainers are known as Matr Shakti, or Power of the Mother, who navigate their submissive, traditional roles as wives and mothers while also training young women to wield weapons in the name of Hinduism.

At the Durga Vahini office in Varanasi, trainers talked to The World about what motivated them to join the group and how it has transformed their lives.

It is often a connection with a trusted person that brings traditional Hindu women into contact with the organization. Once they join, they find a community and above all — an identity outside the bounds of their roles as wives and mothers.

For many of Rita Singh’s generation, joining Durga Vahini was empowering. At 18, she married into a conservative Hindu family and accepted her role as a submissive wife and demure daughter-in-law. She wore the customary veil, known as ghoonghat, and covered her face in public.

When a senior member of the Vishwa Hindu Parishad, a friend of her husband’s, invited her to join Durga Vahini, she felt she became visible as a person. She joined — once her husband gave consent.

“The person who was lost [returned]. Until then, I was known only through the name of my husband. [Within Durga Vahini] I wasn’t known simply as someone’s wife, daughter or mother, I was myself … Whatever I did, felt good."

Rina Williams, associate professor at the University of Cincinnati, who researches women and Hindu nationalist politics, says that women who find empowerment through an organization that spreads hate is an uncomfortable idea. “If we say it is not a genuine form of empowerment then it does not fit with the feminist perspective, but to 'accept these forms of political participation as empowerment does not fit in with the feminist perspective' as well.”

Pratibha Singh was 16 and her husband was 17 when they got married, and she worked hard to please her husband’s family. When she joined Durga Vahini, she went through rigorous testing to become a trainer and felt validated when she got “top marks” in a subject test. The “person who was lost” returned, she said. “Until then, I was known only through the name of my husband.” Within Durga Vahini, “I wasn’t known simply as someone’s wife, daughter or mother, I was myself … Whatever I did, felt good,” she said.

“It revived my confidence."

Sakshi Mishra nodded in agreement. “It revived my confidence,” she said. In her case, her family was at risk of losing their home and did not have the means to battle it out in India’s long and difficult legal system. It was then that she came in contact with a Durga Vahini trainer who got her free legal advice. In turn, Mishra agreed to join the Durga Vahini camp and is now a trainer herself.

Durga Vahini women find power while holding onto their traditional, submissive roles. As trainers, they teach young girls how to be submissive, devout role models. The women often serve as moral police in their communities, attempting to prevent interfaith relationships and monitor inappropriate clothing and behavior. Their first line of defense — calling someone's parents. 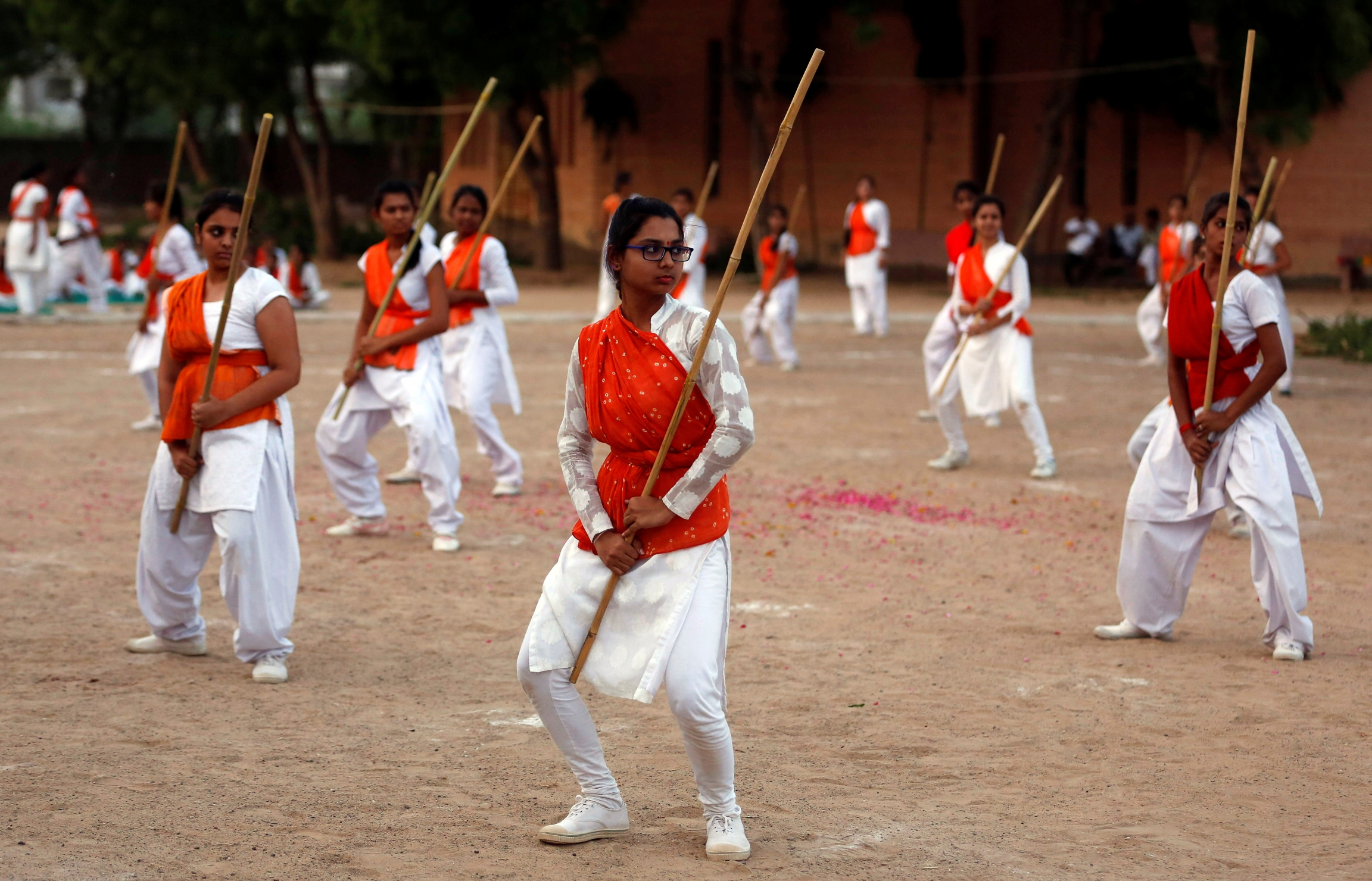 Members of Durga Vahini show their self-defense skills with sticks at the concluding ceremony of a weeklong women's training camp on the outskirts of Ahmedabad, India, May 21, 2016.

Invoking the Hindu goddess as soldier

Shana Sippy, professor of religion at Center College, explains how Durga Vahini effectively makes use of this goddess imagery to frame its potential for violence. While goddesses can be fierce and angry, they are also loving mothers. Women who participate in Durga Vahini are emboldened by how those two sides of the goddess can be manifest in their own love for what they see as the Hindu nation.

“Durga Vahini has used the imagery of the goddess ... It is quite disturbing and masterful — a feeling of empowerment in the midst of submission. It isn’t about just ‘go home and serve your husband,’ but ‘be a soldier’."

“Durga Vahini has used the imagery of the goddess with both raudra and saumya.  It is quite disturbing and masterful — a feeling of empowerment in the midst of submission. It isn’t about just ‘go home and serve your husband,’ but ‘be a soldier’.  [They emphasize] the important role that women have to play in the building of the nation …,” Sippy says.

Related: Women are demanding the right to worship at India's temples

Anti-Muslim rhetoric is central to nation-building, according to the Durga Vahini worldview. Their curriculum includes stories about heroic women in Indian history who gave their lives in their fight to save the nation and resist Muslim domination, drawing from stories of Rajput women committed mass suicide, known as jauhar, to avoid being captured and possibly raped. Islamic rule in India began around the 12th century and lasted until the 18th century, when India was colonized by the British.

Durga Vahini’s founding chairperson, Sadhvi Rithambara, is known for her inflammatory speeches against Muslims. She was arrested in 1995 on charges of inciting communal violence.

Pragya Singh Thakur, a prominent Durga Vahini member, was implicated for violence in a 2008 terror case in which Hindu nationalists planted crude bombs in Muslim communities in several cities, killing six and injuring several others. Thakur, 49, was elected as a member of parliament earlier this year.

Even when Durga Vahini women are not directly linked to violent acts, they also stand alongside men engaged in acts of violence by providing food and other forms of support.

“[Muslims] find vulnerable girls and trap them. They can keep five wives. And they can sell the girls,” Rita Singh said.

Durga Vahini women, she asserted, had managed to save a 13-year-old “victim” of love jihad, who had become pregnant and had nowhere to go.

Shreena Gandhi, a religion historian at Michigan State University, says that this building on fear of the other reminds her of the early 20th century women’s wing of the US-based Ku Klux Klan.

“It’s about how these women feel very empowered in their submissive role.  Back then, the rhetoric was about saving white women from black men. They, too, stressed that women should be good mothers and raise the next generation,” she said. While Hindu nationalists are not using the same terrorizing tactics as the Klan, she said “they are starting to,” given the recent lynching cases of Muslim men. However, no Durga Vahini members have been implicated in any of the lynching cases.

Ultimately, women find meaning and purpose as leaders in Durga Vahini due to their traditional outlook, lack of exposure and lives lived behind the shadows of authoritarian male figures. Yet, their roles remain secondary to men in the overall hierarchy of the Hindu nationalist movement, said scholar Rina Williams, who said that their roles provide legitimacy, but don’t do much to change the organization.

Perhaps being part of Durga Vahini makes patriarchy itself more bearable for women, Gandhi said. These conservative movements convince women that patriarchy is actually better for them.

Sakshi Mishra continues to wake up each day at 4 a.m. to prepare a lunch box for her husband — but then she leaves for her volunteer work training young girls how to be good Hindu women — and use weapons to fight for Hinduism.