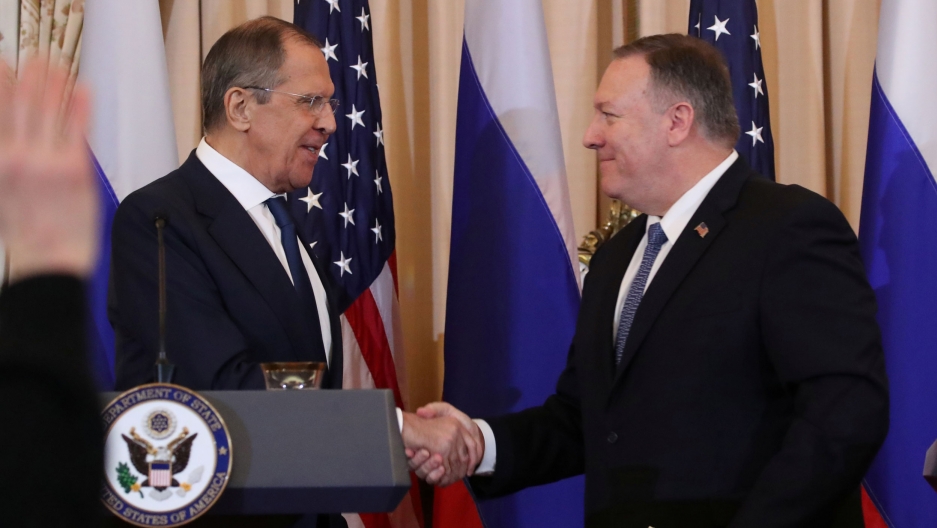 Russia’s Foreign Minister Sergey Lavrov and US Secretary of State Mike Pompeo shake hands at the conclusion of a joint news conference at the State Department in Washington, DC, Dec. 10, 2019.

Editor's note: The on-air interview was updated for a later broadcast of The World (and can be heard by clicking "play" on the audio player).

The last time Moscow's top diplomat visited the White House was 2017. That meeting turned into a public relations disaster for Trump, who was accused by unnamed US officials of divulging highly classified information during that meeting about a planned operation by the Islamic State militant group. The White House denied the allegations.

Lavrov's latest visit comes on the heels of Ukraine-Russia peace talks in Paris, where Ukraine's President Volodymyr Zelenskiy and Russia's President Vladimir Putin agreed on Tuesday to exchange all remaining prisoners from the conflict in east Ukraine by the end of the year, but left thorny questions about the region's status for future talks. The conflict in eastern Ukraine has killed more than 13,000 people since 2014 and has left a large swathe of Ukraine de facto controlled by Moscow-backed separatists.

Tuesday's meeting between US officials and Lavrov is playing right into Russia's hands, said Andrew Weiss, vice president of the Carnegie Endowment for International Peace. "I think what Donald Trump has done here is outmaneuvered himself by chasing after the Russians and basically seeking high-level access to them," he told The World.

Weiss has served in Republican and Democratic administrations in multiple roles, including as director of Russian affairs on the National Security Council. He spoke with The Worl'd's Marco Werman as Lavrov met with US Secretary of State Mike Pompeo.

"The optics of this could not be worse."

"Once again, Donald Trump has undermined what ostensibly is US foreign policy," Weiss said. "In this case, we had a high-level meeting yesterday in Paris that brought together Ukrainian President Zelinsky, Russian President Putin, German Chancellor [Angela] Merkel and the French President [Emmanuel] Macron. Instead of inviting one of our allies or our partners in Ukraine to debrief him on the meeting, we have the Russian foreign minister. The optics of this could not be worse."

Marco Werman: What does that tell us and how do you think Zelinskiy should view this?

Andrew Weiss: I think the Ukrainians are feeling abandoned. For the past almost six years, the United States was their single most important diplomatic partner. All of the Trump-Giuliani shenanigans that are at the center of the impeachment inquiry have basically totally disrupted what had been a very strong partnership between the United States and Ukraine. And this is a totally self-inflicted problem. The United States basically is walking away from a country which is dealing with Russian aggression and dealing with a mess in security terms. It shouldn't be this way. It's a travesty.

What do you think about the timing of the Lavrov meeting on the day that Congress announces impeachment charges against Trump?

The Russians are running circles around Donald Trump. They knew what the timing was going to be. They knew when that meeting in Paris was going to happen. And they knew that the optics of having the United States president and Secretary of State Mike Pompeo hanging out with their foreign minister would send an incredibly powerful signal to the Ukrainians and others that the real message here is that the US and Russia are looking for ways to get back together again and basically paper over all the horrible stuff that's gone down, whether it's in Syria or our elections in 2016. The Russians know exactly what they're doing. It's not at all clear that the Trump administration does.

"This is a meeting without any real clear purpose.  ... The Russians will love the photo op."

So on the agenda today, do you think Lavrov and Trump will talk about arms control? I know Trump has sent mixed messages on nukes, says he doesn't want an arms race, but also is ramping up the US nuke program. Vladimir Putin offered recently to extend the New START, the strategic nuclear weapons treaty. Won't they be discussing that?

Perhaps. The Trump administration has hidden behind this idea that the last remaining important arms control agreement between the United States and Russia can't be extended when it runs out in February 2021 unless we somehow bring the Chinese into that agreement. That's simply not going to happen. The Russians have said they're happy to talk about a clean extension of the treaty for another five years, and the Trump administration basically has said they're not interested. If they change their mind on that, that would be great, but I'm not holding my breath. Beyond that, the US-Russian agenda is basically barren. This is a meeting without any real clear purpose. There's no set of issues that only can be decided at the presidential level. The Russians will love the photo op. They'll be able to demonstrate to the world that, "See, the US really wants a better relationship with Russia." And it's going to wrong-foot any number of foreign partners who are trying to deal with a more assertive and disruptive Russian foreign policy.

Related: Ambassador Huntsman: US-Russia estrangement 'has gone on too long

How concerned are you, Andrew, that a meeting with virtually no agenda could end up by having some unintended consequences like the meeting in 2017?

The staff at the White House clearly is in no position to say "no" to Donald Trump. He has been pushing for these kinds of meetings, most recently had one with Putin at the G20 summit in Osaka, Japan, earlier this year. There are no deliverables, there are no real outcomes here. It's just Donald Trump once again saying, "I've gotta talk to Russians. I need to wrap myself in this idea that the US and Russia somehow can be partners again." Even though, again, there's no substantive foundation that you can establish such a partnership on.

It's really a sad commentary on how the administration is handling foreign policy. Everything comes down to this very personalized set of relationships with authoritarian figures, whether it's Turkey's Erdogan or China's Xi Jinping. Donald Trump just has, I think, this inexplicable affinity for Russia and for Vladimir Putin. It's completely unexplainable.