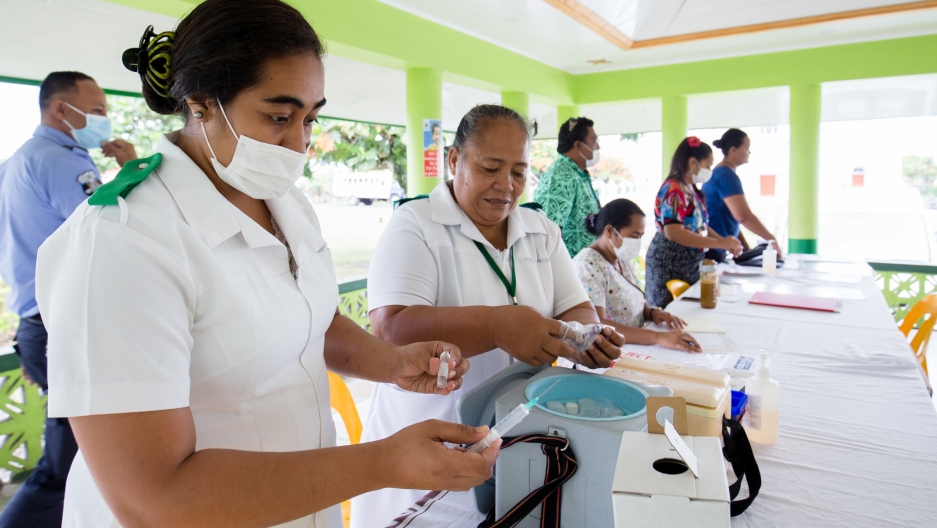 Nurse April Wilson (left), 22, works with team leader Luisa Popo, 50, at a vaccination site in Le'auva'a village on Dec. 2, 2019 as part of the UNICEF-supported national vaccination campaign in response to the current measles outbreak in the Pacific region.

Imagine a disease outbreak so severe that if you're not vaccinated, you flag your home with a red cloth outside your door — so vaccinators can find you.

That is what is happening in Samoa, a Pacific Ocean island country, amid an unprecedented measles epidemic. Businesses, social services and schools have shut down for two days this week to conduct a massive vaccine drive.

“A lot of our people have been so safe in the sense that this was not the kind of disease that resulted in deaths, that they seem to take a kind of lackadaisical attitude to all the warnings we had issued."

“A lot of our people have been so safe in the sense that this was not the kind of disease that resulted in deaths, that they seem to take a kind of lackadaisical attitude to all the warnings we had issued,” said Prime Minister Tuilaepa Sailele Malielegaoi at a news conference this week.

Nearly four years ago, in 2016, measles hit an all-time low around the globe, but epidemics like the one in Samoa are becoming more common. Cases worldwide are now surging at a record rate, according to a new report from the World Health Organization (WHO) and the Centers for Disease Control and Prevention. 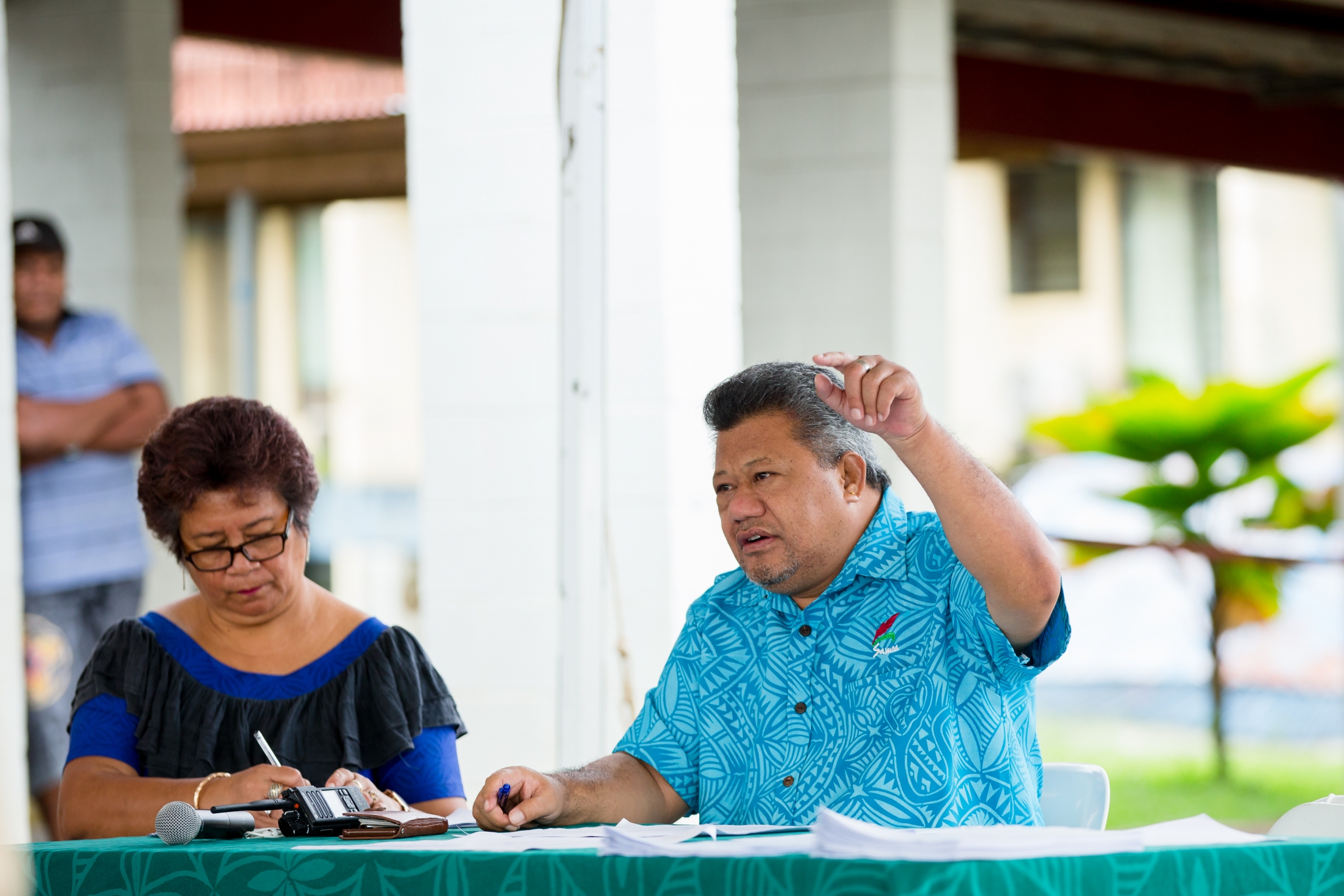 Dr. Take Naseri (right), director general of health for the Samoa Ministry of Health, briefs nurses and vaccination teams on Dec. 2, 2019 in preparation for the UNICEF-supported national vaccination campaign in response to the current measles outbreak in the Pacific region.

More than 140,000 people, mostly children under 5 years old, died of the highly infectious disease in 2018, based on new estimates published Thursday, Dec. 5, in the Morbidity and Mortality Weekly Report.

“The fact that there is measles circulating is really a collective failure. ... It’s tragic. Every single measles case is entirely preventable.”

“The fact that there is measles circulating is really a collective failure,” said Katrina Kretsinger, a co-author of the new study and a lead measles specialist with WHO. “It’s tragic. Every single measles case is entirely preventable.”

Globally, measles vaccine rates are hovering at 86%, which isn’t high enough to protect against the spread of the disease — 95% is the recommended rate needed to protect outbreaks.

No place is immune, said Kretsinger. Clusters of unimmunized adults and children have been at the center of outbreaks in Western Europe and the Americas.

The United States has not seen this level of measles in 25 years, while Albania, Greece, Czechia (Czech Republic) and the United Kingdom have all lost their measles elimination status. In response to the return of measles, German lawmakers passed legislation last month that mandates all families get vaccinated, or face fines of thousands of euros.

Measles is an extremely contagious respiratory disease that can lead to serious complications, especially among young children. New research has found that it can also impact the body’s ability to fight off future illnesses.

The disease has an incubation period that can last up to three weeks, meaning the flu-like symptoms and skin rash might not appear right away. International travel, a cornerstone of modern life, has sped the transmission across borders.

“If you have gaps in your immunity, measles will find those gaps,” Kretsinger said.

Despite its global reach, lower-resourced countries are being hit hardest, according to the new assessment, with weak vaccine programs and health infrastructures driving the disease’s spread.

Democratic Republic of Congo is currently experiencing the world’s largest and most serious measles epidemic, claiming thousands more lives than the deadly Ebola outbreak. The country has experienced more than a quarter of a million cases, including at least 5,000 deaths, since the beginning of 2019. A campaign aimed at vaccinating 2.2 million children in North Kivu launched this week.

Combined with Liberia, Madagascar, Somalia and Ukraine, these five countries accounted for nearly half of all measles cases worldwide last year.

While misinformation and vaccine hesitancy are also factors in lower vaccine rates, Kretsinger said the world has simply forgotten just how serious measles can be. Before the vaccine rolled out in the 1970s, measles claimed millions of lives annually. The elimination of measles became a widespread success story, with an estimated 20 million deaths subverted in the last two decades because of the vaccine.

“The importance and the priority associated with becoming vaccinated and protecting yourself is not what it used to be in years past,” Kretsinger said.

That has been a challenge in Samoa’s latest epidemic, as pointed out by Prime Minister Malielegaoi. 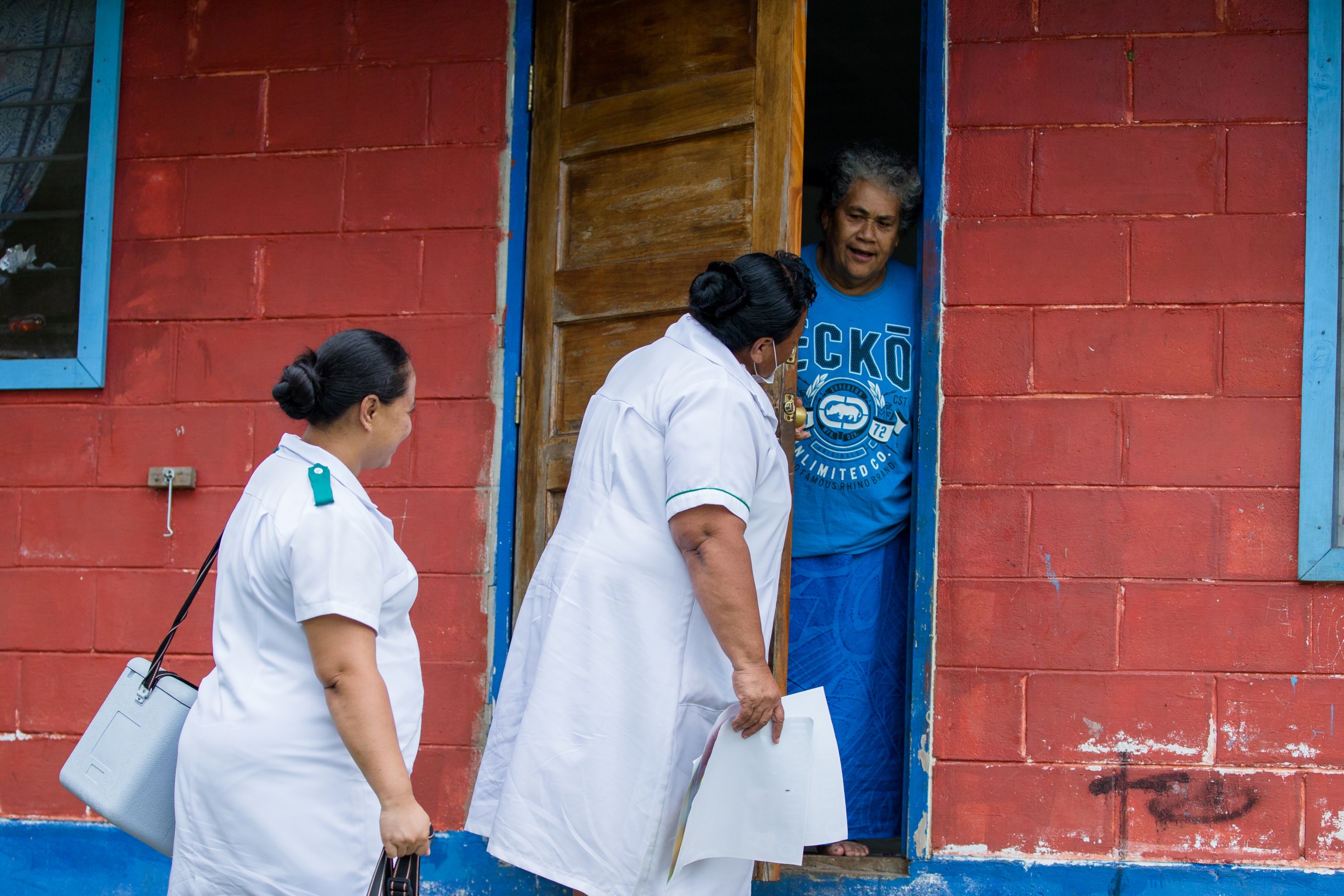 Nurses visit homes in Satuimalufilufi village on Dec. 2, 2019, during a UNICEF-supported national vaccination campaign in response to the current measles outbreak in the Pacific region.

Frances Vulivuli, a medical doctor with United Nations Children's Fund (UNICEF) who oversees vaccine distribution and trainings, said another challenge is that some families have been deferring to traditional healers, who play an important role in Samoa, but whose remedies won’t cure measles.

Related: From measles to the flu, more Turkish parents are saying no to vaccines

“That has led to a lot of critical cases being received [at the hospital] quite late,” said Vulivuli. “They have already developed complications, and that is when they become really critically ill.”

Adding to that, misperceptions about the risk of adverse events and side effects from the vaccine grew after two Samoan babies died last year. The deaths stemmed from a mishandling of the vaccine.

Meanwhile, police in Samoa arrested one of the nation's most prominent anti-vaccine activists this week for "incitement against the government." He had told the government to "enjoy your killing spree," after they rolled out the vaccine effort, according to a press release by the Samoan attorney general’s office.

This week, 100 health teams traveled in vans around the Pacific nation vaccinating residents. Faith-based groups, women’s networks and local chief systems also partnered with efforts to get the word out and dispel myths.

That, along with a visible red flag system, Vulivuli said, is working.

“As soon as [the families] are vaccinated, the red flag is taken down and a green sticker is put in there,” she said.