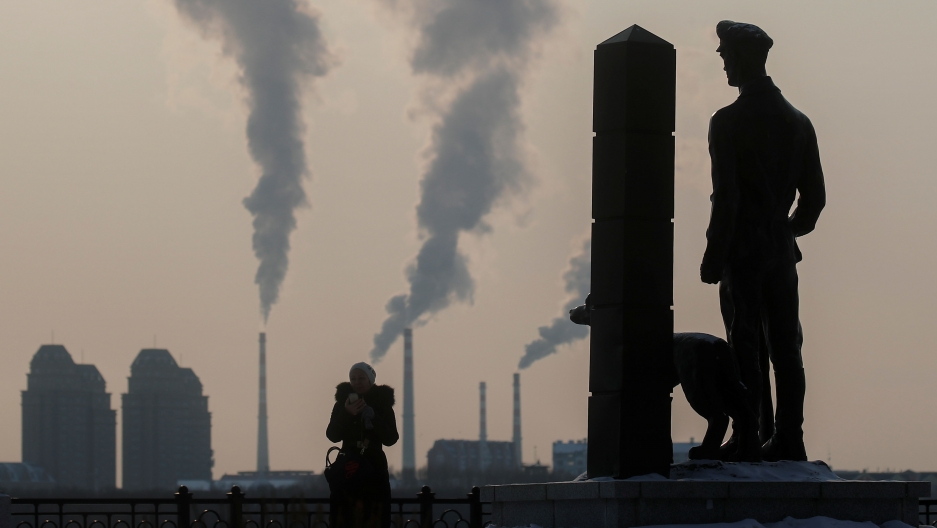 A woman stands next to a monument to a border guard with a dog, with buildings of Chinese border city Heihe seen in the background across the Amur River, in Blagoveshchensk, in Amur region, Russia, on December 1, 2019.

The deal is being called the Power of Siberia. It's expected to boost political and economic ties between Russia and China.

The pipeline reflects Moscow’s attempts to pivot to the East to try to mitigate pain from Western financial sanctions imposed over its 2014 annexation of Ukraine’s Crimea.

Livia Paggi specializes in political risk for GPW, a consulting firm in London. She spoke to The World's host Marco Werman about how the pipeline could shape Russia-China relations — and what their alliance means for global politics.

Marco Werman: Livia, what do you make of this Russia-China oil pipeline?

Livia Paggi: This pipeline really can't be understood without taking into consideration [US President Donald] Trump's foreign policy and what it's done over the past few years to really drive China and Russia's relations and bringing them much closer together. I mean, since Trump's come into power, we've seen a rolling out of aggressive sanctions against Russia. And we've also seen simultaneously Trump driving forward a very aggressive trade war against China. The result has been that Russia and China have really become much closer on a number of fronts. And this pipeline is a very clear example of that deepening relationship.

I know for a while political analysts were in disagreement on whether Russia and China's relationship was improving. I mean, would you say today that this oil pipeline just dismisses those disagreements?

Well, it's a complicated relationship. It's a relationship between two great powers. So it's a combination of wanting to cooperate, but also competition. We've seen a number of clear examples of where the relationship has actually materialized in practice. The pipeline is one example. Gas will be physically flowing from Russia to China, and it will be bypassing Europe and the West. So that's very concrete.

We've also seen, they started doing joint military exercises last year in Vostok. This was unheard of before for Russia and China to have such close military relationships. So these are some very concrete examples of how they've cooperated. As I said in the beginning, there's also a relationship of competition, right? China's economy is eight times that of Russia. So China clearly has the upper hand in this dynamic, which means that Russia has much weaker negotiating power. So it's mixed, I would say.

What worries you the most about this growing Russia-China alliance? Are you worried?

Well, I think the China-Russia alliance highlights that the jury is still out on whether Trump's foreign policy can actually be effective or not. There's been some experts that highlight, you know, maybe we need an aggressive foreign policy, and this is how we can get the best deal for the US, whereas others have been more skeptical. And when you see an alliance like this growing — and they're having greater influence in the Middle East and Africa, these are countries where, traditionally, the US has also had influence — it makes you question what is the long-term game of Trump's foreign policy and whether it will actually bring any benefits to the US or not on a global scale.

Do you think Trump's foreign policy will respond to how the Russia-China relationship evolves, and what are you going to be looking for as it moves ahead?

The most important thing I think is really worrying is to what extent Russia and China will align themselves militarily and also in terms of disinformation and cyberattacks, because that is something that would hurt the US greatly. So I think whether you see them actually materializing on that front, that's going to be the indicator of the level of threat to the US.