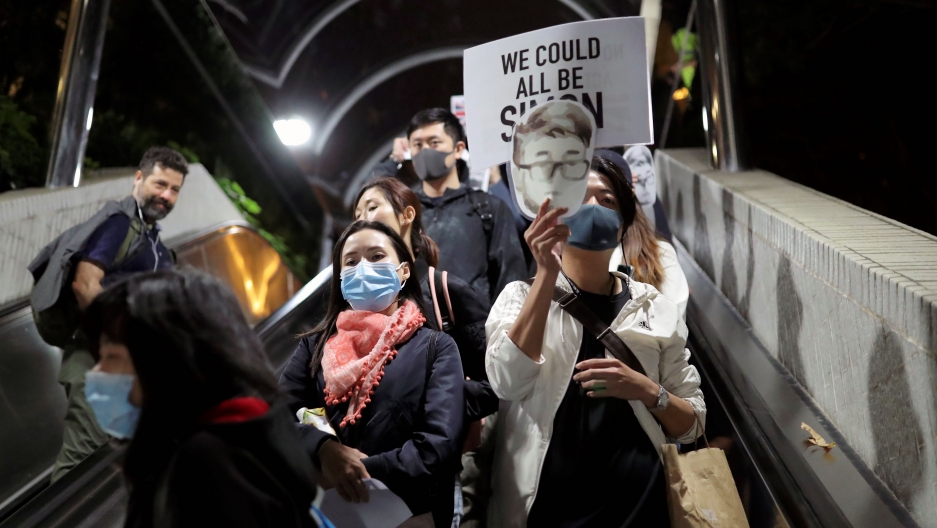 Anti-government protesters ride an escalator at a shopping mall during a rally in Hong Kong, China, Nov. 29, 2019.

As US media fixate on Trump’s impeachment woes, they can count on a set of dedicated viewers across the Pacific: officials in China’s Communist Party.

“Beijing will be watching the Trump impeachment hearings very carefully.”

The Chinese Communist Party, or CCP, isn’t just keen to see members of the Trump administration squirm. The impeachment drama presents a golden opportunity to portray the United States as a nation tearing itself apart — while China, so the narrative goes, is a bastion of harmony and stability.

Related: Will the Chinese American sport ‘9-man’ have to change its strict heritage rules?

But what might the Chinese politburo say about Trump’s impeachment inquiry behind closed doors?

The World spoke with both Ni and Nicholas Khoo, who also analyzes the CCP as an associate professor at the University of Otago in New Zealand.

What is the Chinese government saying publicly about the impeachment?

“It’s in the Chinese state’s interest to portray democracies as inept,” Ni said.

So, that’s exactly how the impeachment process is depicted in Chinese government-backed media: a symptom of the disastrous system — multiparty democracy — that Western powers evangelize across the planet.

“Ultimately, they’re telling a fairly simple story, and it’s that democracy simply doesn’t work. ‘Look at the United States. Look at the problems with racial relations. Look at their politics.’”

“Ultimately, they’re telling a fairly simple story,” Ni said, “and it’s that democracy simply doesn’t work. ‘Look at the United States. Look at the problems with racial relations. Look at their politics.’”

“‘But look at our system, where the Chinese Communist Party leads in all areas of political and social life. We have a stable system, a new innovation upon which to build a new future that is ultimately better for human progress.’”

This “democracy brings chaos” story is one that China’s state-run media has been telling for ages.

The rancor surrounding impeachment just makes it easier to sell.

“What we see in the Chinese press,” Khoo said, “is often far from representing the real perspective of the CCP.”

Internally, China’s leaders are more pragmatic and not so wildly self-assured, he says. Khoo believes the top echelon of the CCP really does feel threatened by Donald Trump.

“They view Trump’s challenge to China as possibly their most serious challenge in the post-Cold War period.”

“They view Trump’s challenge to China as possibly their most serious challenge in the post-Cold War period,” Khoo said.

If Trump’s trade war can blunt China’s economy, that disturbs the fundamental pact offered by the CCP to Chinese citizens: You give us power and control, your lives will continue to improve, at least materially.

Related: If FCC bans Huawei, rural carriers may have to 'rip and replace' gear

“If Trump manages to alter the terms of trade and economic exchange,” Khoo said, “that will have an effect … on how China rises and the rate at which it rises.”

So, the Communist Party wants Trump to get impeached, right?

For starters, Khoo believes that CCP leaders — like any sober observers of the impeachment process — realize a full-on conviction is a long shot. Trump probably isn’t going anywhere until early 2021 at the earliest.

Moreover, according to Ni, the Chinese Communist Party is probably rooting for Trump to win next year’s election — in a most cynical fashion.

Why would the CCP want Trump to stick around?

Because, Ni says, even though Trump is a nuisance in the short term, he is inadvertently advancing Beijing’s grander goals.

“Trump is undermining US power internationally and dividing the US internally — in a way that another leader may not. Even as Trump confronts China, he creates the conditions for American decline and China’s continued rise on the international stage.”

“Trump is undermining US power internationally and dividing the US internally — in a way that another leader may not,” Ni said, “Even as Trump confronts China, he creates the conditions for American decline and China’s continued rise on the international stage.”

Ultimately, he said, “Beijing will be sad to see him go.”

How much does it matter to the CCP if Trump gets impeached?

It greatly affects their short-term strategy, but in the bigger picture, it may matter less than many people think.

In recent years, Khoo says, it’s become harder to differentiate the Democrat and Republican positions on China. Both have reached a consensus, he says, that engaging with China doesn’t seem to nudge the country toward liberalism — and that “China’s rise is one of the most fundamental challenges to the US in the world today.”

Consider the Hong Kong Human Rights and Democracy Act. It pushes the US to sanction any official who abuses dissidents’ rights in Hong Kong, a semi-autonomous Chinese territory. (Thanks to US interference, Hong Kong has become, according to some Chinese media, a nest of CIA plots and radical US-backed separatists.)

“Democrat or Republican,” Khoo said, “the view in DC is to take a hard-line position against the Chinese. Look at the Democrats and Trump. There’s not much of a difference of opinion.”

No matter who wins the presidency, China is likely to face a combative US.

Nevertheless, Ni said, “a Trump White House is still preferable to any other administration that is not so divisive, not so internally focused and is able to come up with an effective international strategy.”