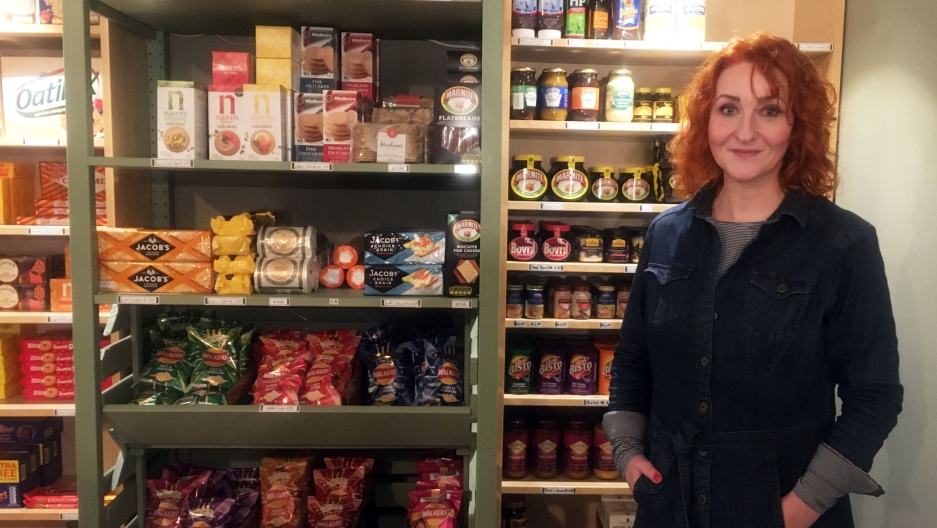 Munich-born Antje Blank is an avowed Anglophile and the new owner of Berlin-based shop Broken English, which supplies homesick expats their favorite UK products. But Brexit might change the future of the shop.

The British flag has become a source of shame for the shop’s new owner, Munich-born Antje Blank.

Blank, an avowed Anglophile, says the flag that once, for her, “oozed a sense of cool,” has now become tainted and stands for “insularity and borderline racism” following the Brexit vote.

“It has been hijacked by the Tory party, the Brexiteers and the Farage people,” Blank said, referring to Nigel Farage, the leader of the Brexit Party. The UK is currently gearing up for a Dec. 12 election, prompted by an impasse in parliament over Brexit withdrawal agreements.

Related: Boris Johnson’s Brexit deal: What’s in it and how is it different from Theresa May’s version?

The Broken English shop is a Berlin institution that provides homesick British expats and anglophile Germans with everything from Tetley’s tea and Branston Pickle to Cadbury’s Chocolate and Walker Biscuits.

But Brexit has shaken the shop’s existence. Its long-time owner, Dale Carr, who is from Sheffield in the UK, closed the store earlier this year. Although she had plans to retire, the prospect of all the paperwork Brexit would entail to import goods to Germany from the UK was the final nail in the coffin.

Blank, who spent 15 years living in the UK and was a huge fan of the store, was devastated when she heard it was going to close. Instead, she decided to take it over from Carr and give Broken English new life. It was also a way to boost her family’s income, which had dropped as a result of the Brexit referendum, she said. Blank’s husband is an academic who travels to the UK every week — his salary dropped as the British pound tumbled.

Blank worries that Brexit will also prove challenging for her new store. The shop imports specialized British produce from many small, family-owned companies who may find it difficult to keep up with exports if Britain leaves the European Union.

“They probably won’t be able to afford to export to us. To fill out the forms that will be necessary for every single product to be exported across the border,” Blank said.

If the UK crashes out of the EU without a deal, exporting and importing goods will likely be even harder. “Operation Yellowhammer,” a government report detailing the consequences of a no-deal Brexit, show that businesses are not well prepared to handle such a scenario. Small businesses are likely to be even more affected.

To ease the pressure, Blank’s plan is to replace some of the lost produce with goods from Ireland, which — although further away from Berlin — will still allow her to continue to import under EU rules. In fact, Ireland has been the EU's fastest growing economy over the past three years of Brexit talks.

As for the change in product sourcing, Blank believes her customers will understand.

"Those customers talk about Brexit every day,” Blank said. The British reflect on it with “a sense of slight shame and exasperation. Germans treat it with complete bemusement,” she added. “It’s a feeling that they've all gone bonkers, but it will be alright in the end."

Blank is skeptical that the long-haggled Brexit will actually come to fruition. "They will come to their senses.”

She herself sees the UK's decision to leave the EU as “monstrous stupidity.”

“I think it's a shambles,” she said. “I find it’s a very backwards move and a very insular move.”

But even if the shop ends up stocking produce from Ireland, the name will stay the same.

“It will be quite prophetic if we call ourselves Broken English and the UK opts for a hard Brexit.”

In the meantime, Blank is considering flying the Saltire — the Scottish Flag — outside her shop. Many of her customers approve of the idea.

Related: How much will a 25% tariff hurt sales of Scotch?

“Because we have a lot of Scottish customers, and a lot of German people who enjoy Scotland.”

But one thing won’t change. The shop’s bestseller: Marmite, the quintessentially British yeasty spread with a “love it or hate it” following.

Broken English shoppers should be able to stay well-stocked with the Britsh delicacy. “We do Marmite from a number of different distributors. Some are in the UK and some in Germany,” Blank said. “I am hopeful they will be able to supply us even if there is a hard Brexit.”