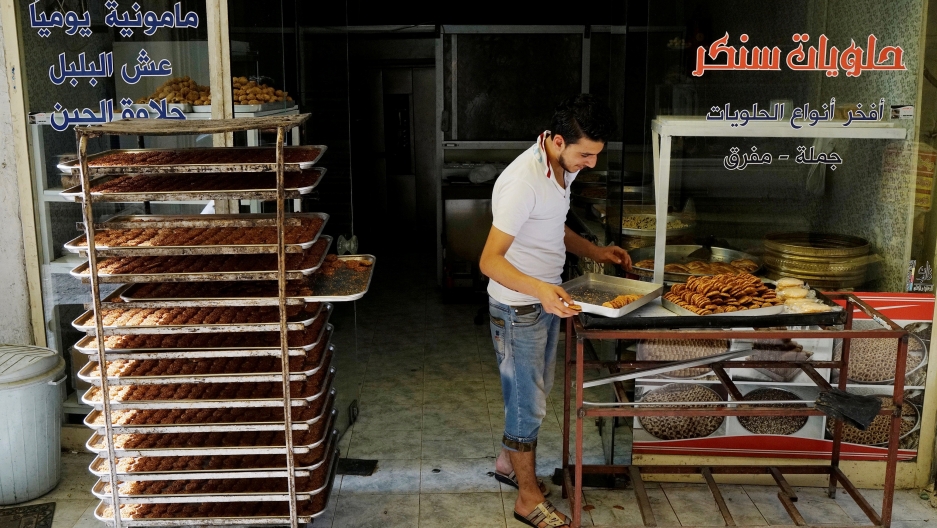 The 22-year-old student is a quivering bundle of energy, barely slowing down as he explains the bureaucratic hoops he’s jumped through to secure a Turkish residency permit before an Oct. 30 deadline.

“If I really don’t have my legal papers, my Istanbul kimlik, I would be deported — God knows to where.”

“If I really don’t have my legal papers, my Istanbul kimlik, I would be deported — God knows to where,” he said from a perch on a low wall in a leafy courtyard.

He asked not to be identified because the residency process isn’t going well. After he moved with his mother and brother from the southeastern Turkish city of Gaziantep to Istanbul a few months ago, immigration officials told him that he was too old to apply for a residency change with his family.

“I would pay the amount of money they want, as much as they want. If I got kicked out, out to the safe zone, I can’t imagine,” he said, referring to a Turkish plan to resettle refugees in a Turkish-controlled section of Syria. “My life would be done at that point.”

The new policy is an extension of a summer crackdown on refugee residency permit rules, requiring those with “temporary protection” status — the majority of displaced Syrians — to stay in the city where they first registered with the Turkish government. Over the summer, at least some Syrians found to be living in other cities, often for work or family reasons, were arrested and deported to Syria. The Turkish government denies these claims, saying the returns were voluntary. Unregistered Syrians, officials said, were sent to refugee camps in Turkey to wait for a placement.

But the news rippled through tight-knit, Syrian neighborhoods.

“You think that life is going to be better, better by time. But it keeps getting better and worse,” the student said. “I mean, sometimes, you can’t even take it.”

Turkey extended a deadline for Syrians to update their registration cards or move until Oct. 30. But many say they’ve run into problems getting their papers in order, and registrations in larger cities, including Istanbul, have been completely blocked.

That’s left many Syrian refugees in the country without legal papers, vulnerable to arrest and fearful about the future.

At least 3.6 million Syrians are believed to live in Turkey. The country hosts more refugees than any other place in the world. Whole neighborhoods have transformed into bustling “Little Syria” districts, where young mothers push strollers past Arabic-lettered storefronts and restaurants proffering stacks of Aleppan baklava and syrupy, tart cherry kebabs. It’s not unusual to meet a Syrian youngster who speaks Turkish, Arabic and English with near-equal fluency.

But this relative stability has come at a price. Over the past 8 1/2 years of civil war in Syria, Turkish public opinion has shifted against the refugees, and the Turkish government has responded in turn. Gradually, under-the-table jobs for Syrian workers became harder to find, while ID checks at offices and factories intensified. In June, an angry mob attacked Syrian businesses in the Kucukcekmece district.

Outside a shop selling doner sandwiches in a tony Istanbul suburb not far away, Murat Gunger says the Turkish people do care about refugees, and they want to help when they can.

“We don’t say they have to leave, but it’s better that everybody lives in his land. We Turks, and I personally, support our government, and any decision they take. They do the right thing.”

“We don’t say they have to leave, but it’s better that everybody lives in his land,” he said. “We Turks, and I personally, support our government, and any decision they take. They do the right thing.”

Everyone should have a right to live in peace, Gunger says. But on their own land.

Turkey’s latest incursion into northern Syria has upped the ante. The military’s seizure of about 900 square miles of land in northern Syria has created a physical place for deportees to be sent should the Turkish government decide to do so.

“You feel numb, like when someone keeps hurting you, over and over,” said one Syrian refugee, a 26-year-old graphic designer in Istanbul, as she mimed the motion of a repeated punch to the shoulder. She also asked not to be named, fearing repercussions against her family.

Last month, Turkish President Recep Tayyip Erdoğan stood up at the UN with a large poster board map of Syria, marked with a 30 kilometer-wide border zone that he said could house up to 2 million Syrian refugees.

“The refugees can be resettled, saving them from tent camps or container camps,” Erdoğan said. “This is not a burden that we can bear exclusively as the Republic of Turkey.”

The plan was criticized by international human rights monitors. Families resettled in the area would likely be stuck — unable to legally return to Turkey, and risking imprisonment and torture if they enter Syria. Without family ties to the area, or jobs to work, what would they do there?

Historically, civilian safe zones carved out from a war zone have also become targets for warring factions. The Srebrenica massacre of 1995 happened in a UN-designated safe zone.

Weeks after Erdoğan’s speech, the Turkish military and its proxy, the Free Syrian Army, invaded the Syrian border region. It came shortly after US President Donald Trump ordered American troops to leave the area, where they were supporting a collection of Kurdish-led militias, the Syrian Democratic Forces. But grand plans were cut short when the Turkish military failed to take control of the entire area.

“We have to admit that the goals of Turkey will not be achieved in its full extent as it seems now,” said Ömer Özkizilcik, a Turkish analyst for SETA, a pro-government think tank in Ankara.

Related: Why the US has nuclear weapons in Turkey — and may try to put the bombs away

“However, the current safe zone under Turkish control is enough to inhabit approximately 400,000 Syrian refugees who might turn back voluntarily,” he added.

Over the weekend, Erdoğan said that if the world does not support Turkish projects to return Syrian refugees, they would send them on to Europe.

“There are huge tensions inside the Turkish society, and there are even mobs going after Syrian refugees randomly in the streets.”

“There are huge tensions inside the Turkish society, and there are even mobs going after Syrian refugees randomly in the streets,” Özkizilcik said. “So, I think if there isn’t a solution in which the refugees can go back to Syria or go to the European states, there will be an increase in social tensions inside Turkey.”

But Syrian refugee admissions to the West have seemingly slowed to a trickle. In the first eight months of this year, the United States resettled just 415 Syrians, up from 29 the year before.

With few good options, choice is a relative term

At a bakery café, Jamil Haji orders a thick, sweetened coffee brewed on the stove, a drink that Turkey and Syria both share. A father of two young sons and the owner of an import-export business, he joined the protests in his hometown of Latakia, Syria, when they started in 2011. When government snipers shot soldiers responding to the protest, he says, officers opened fire into a crowd of civilians.

“I saw death everywhere. Every time you go outside.”

“I saw death everywhere,” he said. “Every time you go outside.”

Over the years in Turkey, Haji has become a community touchstone. As someone who follows politics closely, he considered becoming a politician in Syria — back when it seemed like the international community might force the Syrian dictator, Bashar al-Assad, to step down.

Today, the Syrian regime, backed by Russia, has control of most of the country. Hundreds of thousands of people are internally displaced in opposition-held areas of the north, some camping under olive trees as winter approaches. Others are newly displaced by Turkey’s incursion into the largely Kurdish northeast.

So, Haji watches negotiations between foreign powers with the grim pessimism that comes when the worst-case scenario becomes reality. When everyone you thought could help has let you down.

“The safe zone is the result of the clash between these two projects. It’s not the solution for the Syrians,” he said.

Haji has no doubt that people do want to go back. But the idea of this being a free choice is dubious when there are so few options.

Only the desperate would go back to face these things, Haji says. But life is getting more and more difficult on the outside.

“Some people prefer this kind of death.”