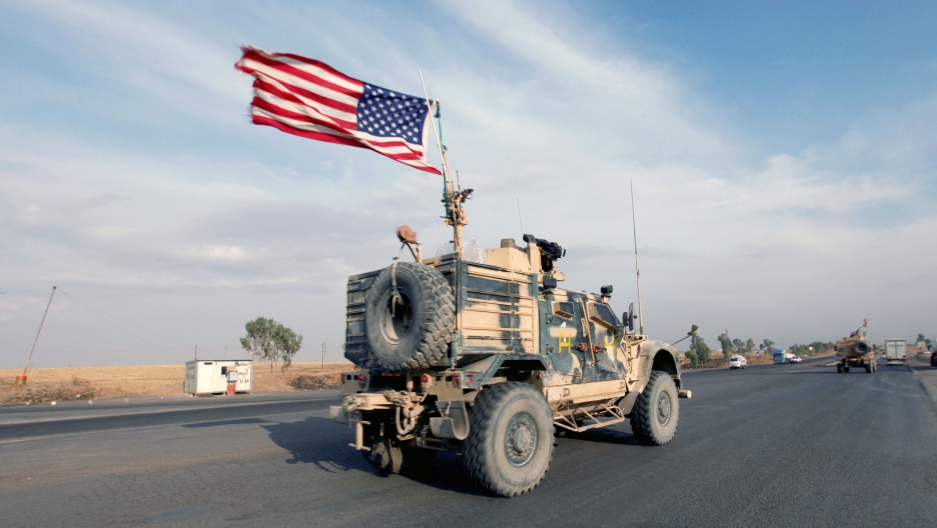 A convoy of US vehicles is seen after withdrawing from northern Syria, in Erbil, Iraq, on Oct. 21, 2019.

US President Donald Trump said on Wednesday a ceasefire in northern Syria is now permanent and lifted sanctions on Turkey as a result, rejecting criticism of his decision to pull out US troops that allowed Kurdish allies to come under attack.

In a White House speech, Trump described the truce as a "major breakthrough" negotiated by a team led by Vice President Mike Pence. Trump said he instructed Treasury Secretary Steven Mnuchin to rescind sanctions imposed on Turkey after it attacked the Kurds "unless something happens that we are not happy with."

"Countless lives are now being saved as a result of our negotiation with Turkey, an outcome reached without spilling one drop of American blood: no injuries, nobody shot, nobody killed," Trump said.

He said he may meet Turkish President Tayyip Erdğoan soon.

The speech failed to blunt attacks from US lawmakers over Trump's abrupt decision early this month to withdraw troops out of northeastern Syria to clear the way for the Turkish incursion. Congress was still working on a sanctions package of its own to punish Turkey for its cross-border offensive.

Related: Civilians in northern Syria prepare for the worst

Kurdish allies who helped the United States in its war against ISIS militants felt abandoned by Trump, whose policy created an opening that Russia has capitalized on by moving forces into the area. The fate of ISIS militants in Syrian Kurdish prisons also remained up in the air.

The World's Marco Werman spoke with former Secretary of Defense Ash Carter, who served from 2015 to 2017 in the Obama administration, about Trump's recent troop decisions in Syria.

"My heart went out to our guys," Carter said. "It's a terrible thing to put them in this position. This was an incomprehensible surrender of our position and of the people who helped us win. And, you know, if you don't want to be in endless wars, don't lose the wars you've already won."

"This was an incomprehensible surrender of our position and of the people who helped us win. And, you know, if you don't want to be in endless wars, don't lose the wars you've already won."

Related: Former defense secretary: US could end up in 'unintentional' war in Iran

So, President Trump has pulled the US troops out, but there are now reports that the Pentagon has drawn up tentative plans to send 30 Abrams tanks, along with half of an Army armored brigade to Syria's oilfields. What do you make of this news?

Well, it's kind of a fallback position after having done this — to me an incomprehensible move — walking away from the Syrian Kurds and our position in northern Syria and also greenlighting Turkey to do something it's been asking to do for years. We've always said no for good reason. This is a fallback-fallback position. I don't know how sustainable it is. But I think it arises — I'm guessing — from the Pentagon trying to claw back some sort of position in northeastern Syria despite the president's decision.

On Wednesday, Trump gave a speech about the situation in Syria. "We've secured the oil and therefore, a small number of US troops will remain in the area where they have the oil and we're going to be protecting it and we'll be deciding what we're going to do with it in the future," he said. 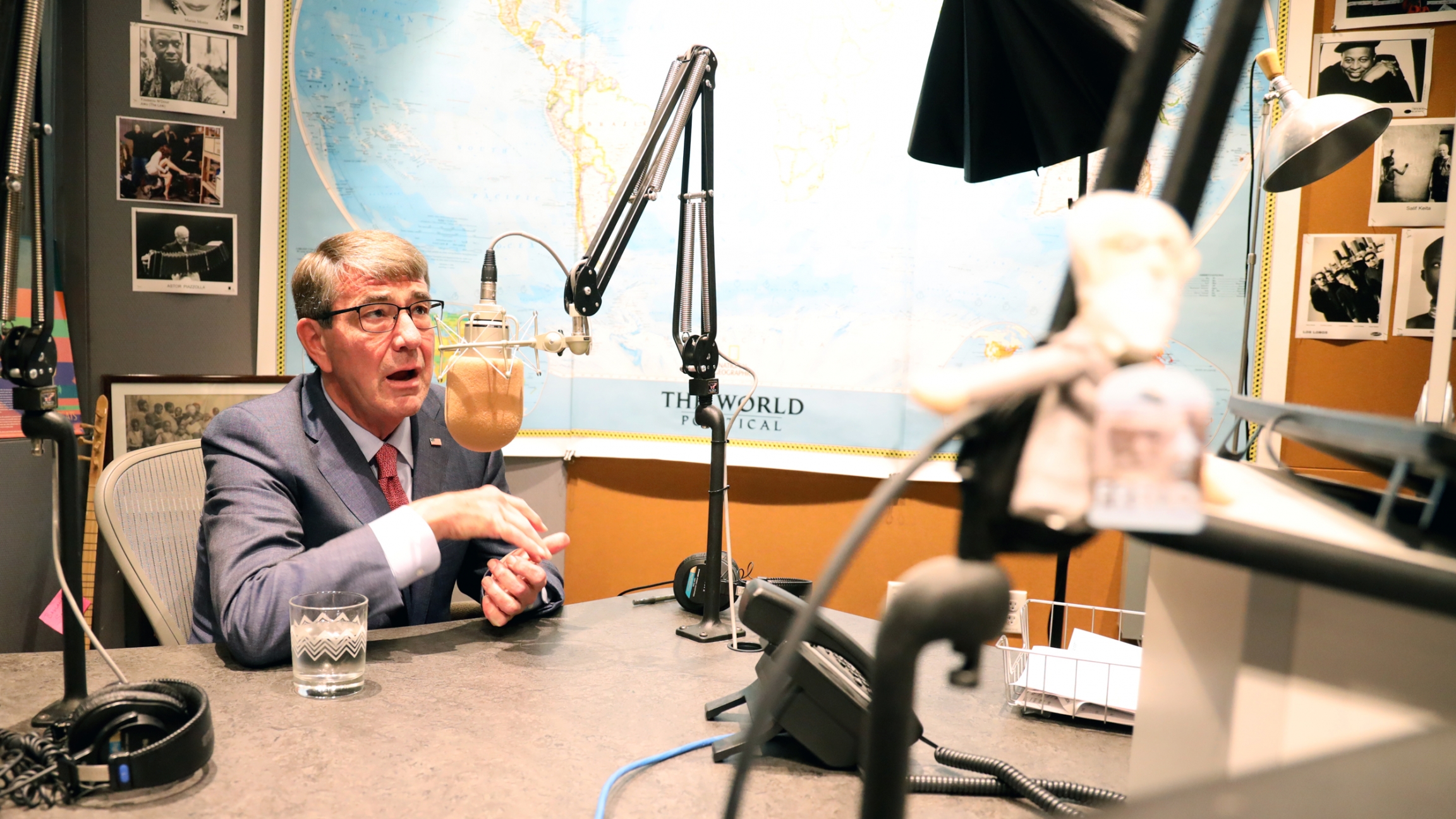 You have a small number of troops and a big place. We might — might — be able to influence something about what's done with the oil there. But we basically just gave up our principal leverage voluntarily to Turkey, to Russia, to the Syrian regime and to Iran, and I find that incomprehensible.

Ash Carter, one of your main responsibilities during your time as Pentagon chief was combating ISIS. President Trump is trying to reassure us that ISIS cannot rebound: "ISIS is under very, very strict lock and key and the detention facilities are being strongly maintained. There were a few that got out, a small number, relatively speaking, and they've been largely recaptured." Well, there are mixed reports on the numbers who have escaped. But do you think the Pentagon is as confident as President Trump about the future of ISIS?

They certainly have no reason to be as confident as that. These guys have shown before in history, both after 2003 and then after US forces were basically withdrawn from Iraq the first time, they've shown their ability to come back. So, ISIS will come back. They'll come back, in part, through these detainees that the Kurds are now watching and are now less able to protect and have less desire to protect. And then, there are some that we never captured or killed. They said they'd fight to the death and unfortunately, they didn't all. So, these guys are fanatics and if they're not dead, they're waiting for a new opportunity. So, what's going to happen, I'm afraid, is that ISIS is going to come back. We're going to have to do it all over again. But, next time we'll be alone.

"So what's going to happen, I'm afraid, is that ISIS is going to come back. We're gonna have to do it all over again. But, next time we'll be alone."

That is a terrifying prospect, especially for Kurdish civilians, and it's not their only menace right now. Turkey and Russia are patrolling the so-called "safe zone." Will Kurdish fighters and civilians drop back or are we likely to see something like what a lot of people worried about — ethnic cleansing in this area?

They'll have at each other. I wouldn't say the Turks will have the upper hand there. One of the things our people who assessed the Turkish-proposed campaigns over the years — to do exactly what they're trying to do now — was that they wouldn't be very successful. So, there may be some bloodshed and so forth, but it is always in these situations, the civilians pay the worst.

If there is widespread killings of Kurds, would the US be complicit, as UN troops were in Rwanda in 1994 for what happens in that zone?

We won't have caused that, in any event.

We will have precipitated it, though.

Well, I think we inadvertently destabilized a situation which it didn't look like we understood what the consequences would be.

A lot of people don't think about —

— the ceasefire. Well, I'm talking about in the government, not outside of the government. And now, we're trying to tamp down a Turkish campaign that we essentially greenlighted.

What advice would you offer US Defense Secretary Mark Esper?

The president doesn't seem to consult his advisers and his Cabinet members before he makes a decision. I, therefore, don't know whether the current secretary of defense was involved in this decision or not. Of course, that was the principal reason cited by Jim Mattis, an old friend of mine and my successor as secretary of defense, for relinquishing his position.

You must have some thoughts on what direction Esper should be taking.

I think he's trying to preserve whatever parts of our strategic position are left there, but we really relinquished a lot of our position there. And it's not going to be possible to claw it back, nor do I think the president is going to permit the department to claw it back, even if it were possible.