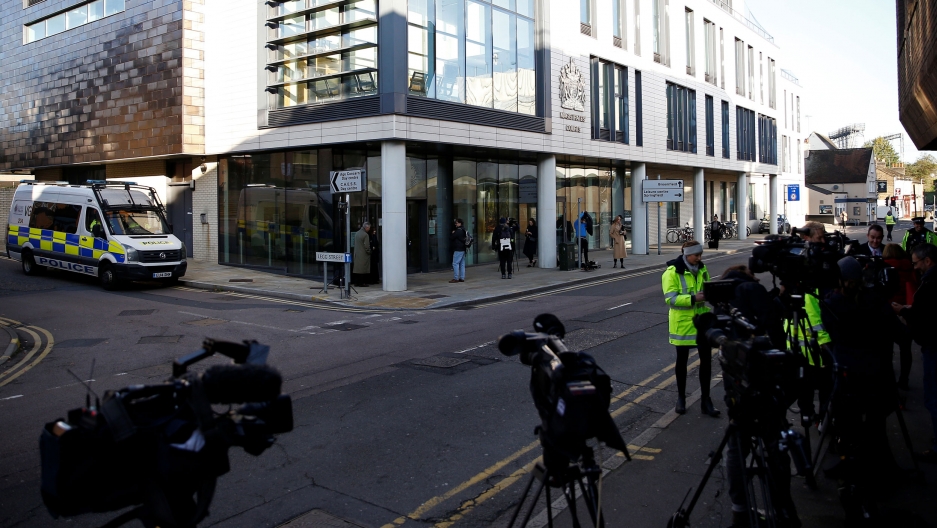 Members of the media are seen outside Chelmsford Magistrates' Court, in Chelmsford, Britain, Oct. 28, 2019.  The court heard that a global smuggling ring was involved in the smuggling of 39 people found dead in a refrigerated truck last week.

A court heard on Monday that a global ring had been involved in smuggling the 39 people whose bodies were found in a truck near London, as the driver faced charges of manslaughter and people-trafficking.

The discovery of the bodies last week in a refrigerated truck on an industrial estate near London has shone a spotlight on the illicit trade that sends the poor of Asia, Africa and the Middle East on perilous journeys to the West.

The truck's driver, Maurice Robinson, appeared in Chelmsford Magistrates' Court via video link. The 25-year-old, wearing a gray sweatshirt, spoke only to confirm his name, address and British nationality.

Related: Her family's business was trafficking. But she broke free.

Robinson faces 43 charges in all — 39 counts of manslaughter as well as accusations of conspiracy to traffic people, conspiracy to assist unlawful immigration, and money laundering.

"My child was scammed. The guy who helped him organize the journey to the UK said the 'VIP' service was very safe, commuting in four-seat car — not that container."

"This involves a global ring facilitating the movement of a large number of immigrants into the UK," prosecution lawyer Ogheneruona Mercy Iguyovwe told the court. She said other suspects were still being sought.

Robinson did not apply for bail. He was remanded in custody until Nov. 25, when the case will continue at the Old Bailey, London's Central Criminal Court, and he will enter a plea.

He was arrested shortly after the bodies were found near the English port of Purfleet. The shipping container they were in had traveled from Zeebrugge in Belgium.

"The whole nation and indeed the world has been shocked by this tragedy, and the cruelty of the fate that has been suffered by innocent people who were hoping for a better life in this country," British Prime Minister Boris Johnson wrote in a book of condolences.

Interior minister Priti Patel told parliament the investigation would unravel "criminality that could stretch halfway across the world".

Many of the dead appear to have come from Vietnam's northern rice-growing areas of Nghe An and Ha Tinh, two of its poorest provinces.

"If I could travel back in time, I wouldn't have let him go this way," said Hoang Thi Ai, mother of Hoang Van Tiep, 18, who is feared to be among the dead. "I clean his room every day with the hope that he wasn't in that deadly truck."

Police have said few of the victims were carrying official identification, and that they are resorting to fingerprints, dental records, DNA and photographs from friends and relatives.

Deputy Foreign Minister Bui Thanh Son said Vietnam was still unable to confirm the nationality of any of the victims.

Bui Thi Nhung, 19, is believed by her family to be one of the dead.

They said she had left Nghe An in August, making her way from China to Germany, then Belgium, where they believe she entered the container.

About 70% of Vietnamese trafficking cases in Britain between 2009 and 2016 were for labor exploitation, including cannabis production and work in nail salons, Britain said last year.

A report last March by the Pacific Links Foundation, a US-based anti-trafficking organization, identified Nghe An as home to many victims of human trafficking who end up in Europe.

The other province, Ha Tinh, was ravaged in 2016 by one of Vietnam's worst environmental disasters when a steel mill owned by Taiwan's Formosa Plastics contaminated coastal waters, devastating fishing and tourism.

Tiep's mother said she believed her son had been tricked into traveling to Britain, since he had made it to France when he was 16 and settled down.

"One day he hastily asked us to raise 100 million dong ($4,300) for his trip," Ai said, sitting with family members in their house in Dien Chau district of Nghe An province.

"My child was scammed. The guy who helped him organize the journey to the UK said the 'VIP' service was very safe, commuting in four-seat car — not that container."

(Writing by Guy Faulconbridge in London and James Pearson in Hanoi; Editing by Kevin Liffey)