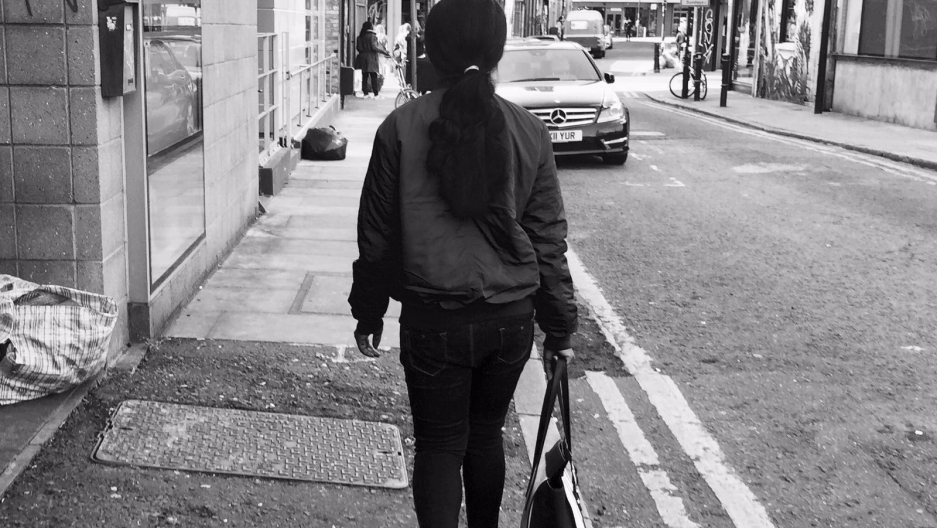 When Halimot was a child, she was captured and sold by sex traffickers. She's part of an increasing number of Nigerian women who are being trafficked to Italy and the rest of Europe. But her story has an unusual twist: She managed to escape.

Halimot was 15 when she came to England. She says her Aunt Miriam dressed her up "really smart" — in an elegant outfit and sunglasses to hide her eyes.

Because, Aunt Miriam explained, "if they see your eyes, they'll see your fear."

Before they headed to the airport, Halimot grabbed the phone number she’d written on a piece of paper. "I put the number inside a tissue — I wrapped it. And I put it in plastic, and then I put it [under my shirt], so it wouldn’t get wet."

When they got to London, Aunt Miriam and Halimot made their way to King's Cross, a massive, grimy, old train station. Aunt Miriam got on the phone and started yapping away, as she often would. And that’s when Halimot did it. She ran as fast as she could. She weaved her way through the thick stream of commuters, past the beggars, and bolted out of the building, into the streets of London.

She kept running, as fast as her small legs could carry her.

It’s been 15 years since Halimot ran out of that train station. She’s almost 30 now, but there’s still a childlike quality about her. She has the body of a small ballerina, and she loves all that glitters. Glittery slippers, sparkly little earrings. 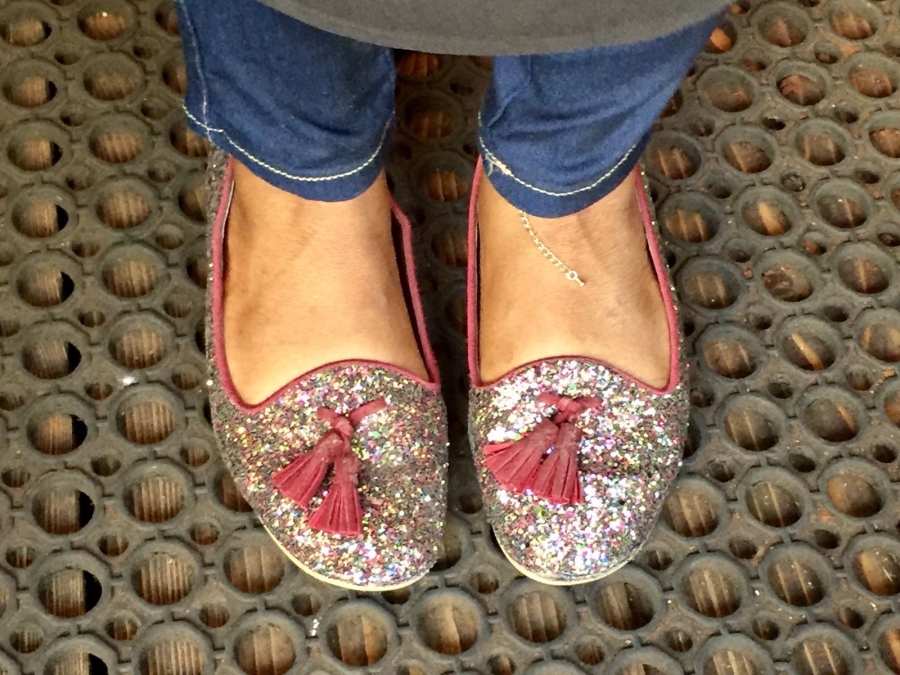 Halimot escaped about 15 years ago. These days she lives in England, and is processing an asylum request.

Halimot doesn’t remember much about where she’s from. Somewhere in Nigeria. She knows she had a good childhood there. "I’m from [a] middle-class family, everything was fine." And she knows, when she was 10, her luck changed. Her dad died. The day he died, an auntie came to pick her up at school.

Miriam was a relative who lived in Italy. The family decided Miriam would take Halimot, and make sure she went to a great school. So, Halimot left her mother and siblings and was off to Europe. In Italy, they checked into a hotel.

"As soon as we got to the hotel, she made a phone call for people to know we'd arrived. People started coming. I was in the room and she gave the other two males money, and they were having an argument, about the money." It was then that Halimot knew something was wrong.

"I tried to open the door, just to see what was going on, and she asked me to go back inside the room. So, I went back."

What there was, was about $50,000. That’s what Halimot thinks she was sold into prostitution for. When Halimot said no, Aunt Miriam gave her a beating. Because this was what Aunt Miriam did: She was a trafficker.

A thick fog often blankets the old, humid city of Bergamo, Italy. At around dusk every day, Halimot joined a line of girls, who stood on the sides of a long road. She wore makeup to look older, and heels, to look taller.

A lot of those girls are African, and they’ve been bought and sold, like Halimot was. Italy has a sex-trafficking problem. Halimot’s story is far from unusual. According to the International Organization for Migration, just last year, more than 11,000 Nigerian women were registered coming into Sicily, and most were believed to be trafficked by ruling mafias working with Nigerian crime organizations. That’s twice as much as the year before.

According to Valentina Pancieri, who studies trafficking of Nigerian women to Europe, extended families often play a role in trafficking scams.

"Discussions about human trafficking between Africa and Europe are frequently blurred by generalizations about villainous traffickers and their naïve young victims who have been misled into prostitution," Pancieri writes. "But the world of sex trafficking is far more complex. For example, several studies have shown that Nigerian sex-trafficking rings are dominated by women."

The girls' families back home are poor; they turn a blind eye. Pancieri says the remittances sent back by sex workers are "a double-edged sword. They provide a financial incentive to the family in Nigeria to do whatever they can to discourage the women from escaping. As long as the woman keeps sending money home, neither the community nor the family is likely to question the source of her income."

In all the years Halimot spent by the side of the road, her mother never once checked on her. She says it’s too painful for her to talk about.

When Halimot turned 15, Miriam decided to fly her to London. This is a common move — traffickers will take girls from place to place, to avoid getting caught. And that’s when one of the girls who worked with Halimot gave her a phone number. Halimot remembers the girl telling her, "if you're ready to escape, call that number."

So, Halimot hid that number under her shirt, dressed up and grabbed her fake British passport. They arrived in London. Aunt Miriam got on the phone.

"I ran for about 20, 30 minutes," she recalls. She finally stopped at a payphone, on a corner. "As soon as I get to the corner, I took out the number, and I begged for coins. ... All I knew is I just wanted to stay alive. Just wanted to not die.”

She panhandled for change to make that call. But where was she? In a panic she realized, she didn’t even know. Her money ran out; the call dropped. She begged for more change. Checked the street name. Called again. An hour later, her contact came to pick her up.

After five years of slavery, Halimot was free.

In the detective shows about sex trafficking, this is where the episode ends. The handsome, brave detectives free the scared girls, and the credits roll. Everyone lives happily ever after. It rarely goes so smoothly.

The part no one talks about is that for someone held captive for years, freedom is terrifying. Halimot was petrified of Miriam and her henchmen finding her. Not just that: She was in the UK illegally. So, she was scared of getting caught. This happens to a lot of women who escape trafficking — they’re too paralyzed by fear to get help.

Halimot had no education. No profession. Those formative years that most of us spend building life skills — she'd spent on the side of the road. This is yet another challenge for women who escape: The task of rebuilding life is completely daunting, they very often lack the basic life skills. Many of them return to sex work. Others fall into a state of depression.

Medical studies have found that survivors have high levels of post-traumatic stress disorder. For months on end, Halimot stayed inside her friend's house, watching TV in English, a language she’d long forgotten. She started getting splitting headaches, night after night of insomnia. Suicidal thoughts. It eventually landed her in the ER. That’s where she met a doctor — who had been trained to identify victims of the sex trade.

And that's the first time she heard this: "You were trafficked."

To Halimot, the words the doctor was saying meant nothing. "No," she replied. "Aunt Miriam brought me." 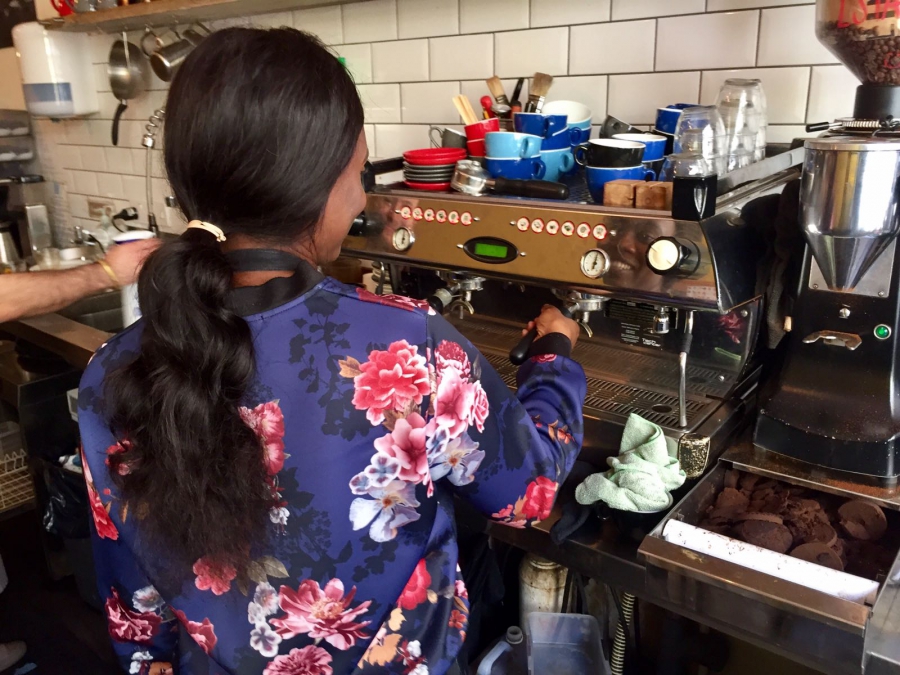 Halimot says even when she broke free, she didn't understand she had been trafficked.

This is ultimately one of the hardest parts survivors have to face — understanding what happened to them. Halimot says it was terrifying telling the truth to this doctor. In England, there has been a push to train doctors and nurses to identify victims of trafficking, because studies show that many women come into contact with health care providers while they are being trafficked.

The fact that her doctor was trained to see beyond a woman with headaches, ended up saving Halimot's life. He referred her to various nongovernmental organizations that work with women in her situation. It was a turning point.

When Halimot was a kid, standing on the side of the long road in Italy, she says, "I remember I wanted to have magical powers." So that she could disappear forever. She never got superpowers. Instead, she got something every bit as unlikely: freedom from modern-day slavery. She got mental health counseling. She started an asylum request.

These days, she works at a bakery called Luminary, which teaches and employs survivors of trafficking. She makes cakes that are gooey and glittery, Barbie pink and soccer field green. 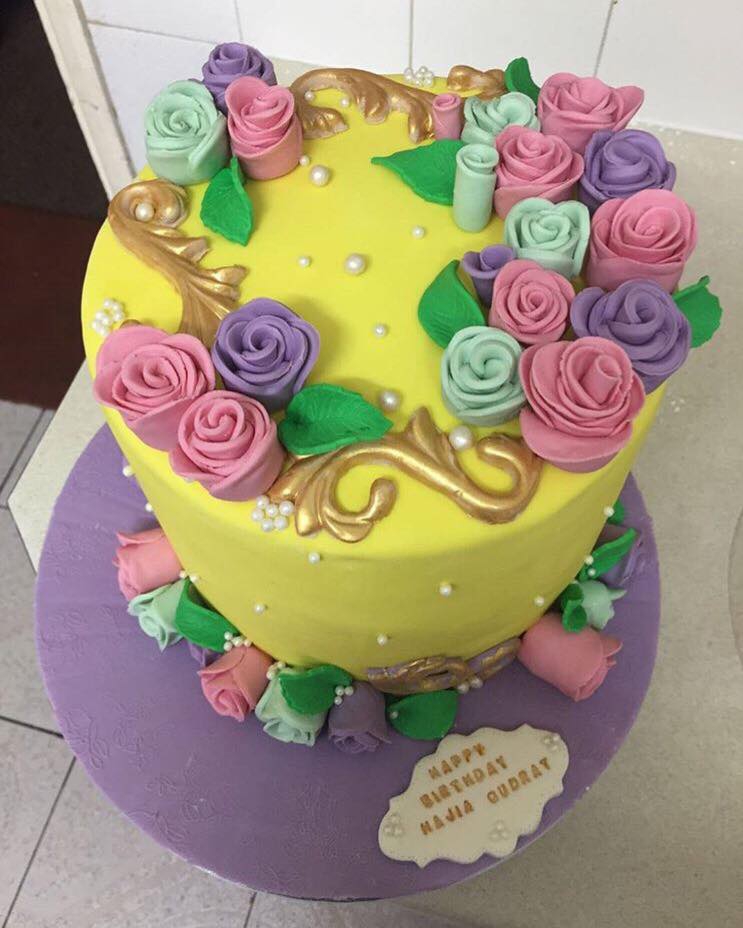 These days, Halimot works at Luminary Bakery, which trains women who are in vulnerable life situations.

They read “You’re a great dad,” “To The Best Mum” and “Happy 10th Birthday Micah” ... with the sparkling exuberance of a girl who never got to live those moments herself.

This is our part of a deep look by Across Women's Lives at sex trafficking around the world. From India to Italy, Uganda to the UK, we'll look at the toll that being sex trafficked takes and some of the strategies taken by women to escape. Check back from now through Friday for more of our coverage of the journey out of trafficking. Following along at PRI.org/sold.