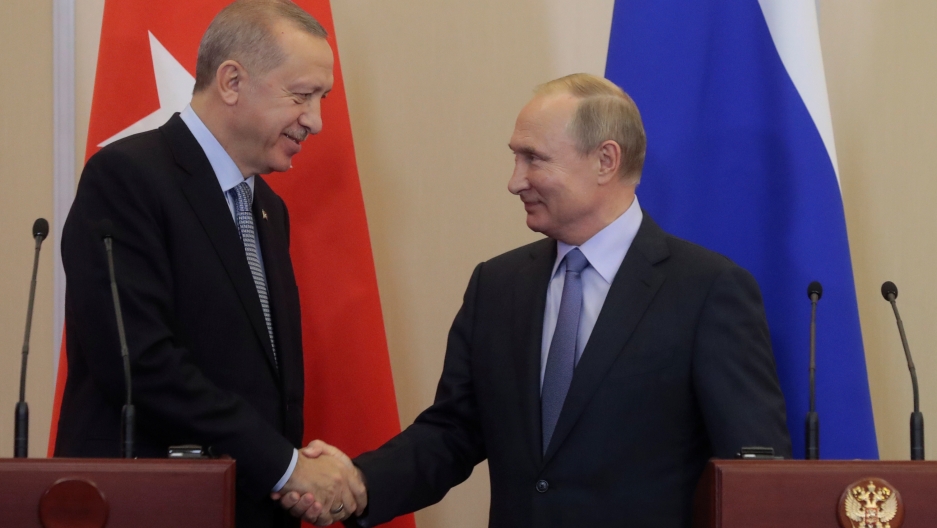 Russia and Turkey say they have reached a historic agreement on Syria.

Turkey will get a "safe zone" inside Syria — an east-west strip that will extend 20 miles from the Turkish border. That strip will have three segments: Turkish troops will occupy the central section, while Russian and Syrian forces will occupy sections on the east and west. And Kurdish-led fighters, who had been allied with the United States but whom Turkey considers its enemy, must leave the entire area.

The agreement was announced Tuesday after six hours of talks between Turkish President, Recep Tayyip Erdoğan, and his Russian counterpart, Vladimir Putin, in the Russian Olympic city of Sochi. Under the deal terms, Turkey is to begin removing the US-allied Syrian Democratic Forces — who are led by a mainly Kurdish militia, the People's Protection Units, or YPG — from its border region on Wednesday.

The World's host Marco Werman spoke to Ceylan Özen Erişen, Turkey's Consul General in Boston, on how Turkey views the agreement and its latest policy in regard to Syria.

The World: How happy is Turkey with this agreement?

Ceylan Özen Erişen: Well, I think it's too soon for me to comment on that about the details of the agreement. But I can definitely say that it's a huge step in Turkey's broader efforts in cleaning up the terrorists from its borders, and even broader aims to establish security, safety, integrity and unity of Syria.

Does this mark the end of offensive military operations by Turkey inside Syria as well?

The aims of the military operation is to eliminate a longstanding terror threat against Turkey's national security and to enforce serious territorial integrity and unity, as I said in my first sentence. So until those aims are finally reached, and if we have more terror attacks from the Syrian territory, then the military operation, I believe, will restart.

So you're talking about the terrorists belonging to the PKK. Correct?

But not the YPG, which is the group that was being supported alongside the American troops?

Well, for us, we have been emphasizing to the international media for a very long time that YPG and PKK are definitely the same two things.

And yet they are not the same two things.

They're the same thing. YPG is PKK's offshoot in Syria.

But the YPG has not staged attacks to change the political situation in Turkey.

But YPG has been staging attacks in Turkey.

What is the evidence of that?

PKK and YPG, they both have the same military command. They are parts of the same structure.

These are the claims that we have been listening enough, and actually the other aims of the military operation, the peace operation, is to liberate the local population from PYD and YPG oppression. They've been oppressing all the ethnic groups in their territory. This is clearly a terrorist group. And also we would like to set to the ground for safe and voluntary returns of Syrians in Turkey, the number of which is around 300,000.

We'll get to that in a moment. Let me just get back to this belief on the part of the Kurdish commander that Turkey is planning ethnic cleansing. What assurances can Turkey give to Kurdish civilians who live in this border area?

Which general is that?

Yeah, he's a wanted terrorist in Turkey for 29 years. So I'm not going to comment about this.

What about the civilians, the Kurdish civilians, who are concerned about this as well?

Who are those Kurdish civilians — that I don't know. But Turkey is working on the ground with the United Nations and United Nations agencies, and with all the actors, to provide safety and security of all the populations, Kurds and Arabs and other ethnic minorities alike on the ground. So these claims are completely baseless.

You know, the example, though, of the district of Afrin in northwest Syria was occupied by Turkey in March of last year, and the Kurdish population fled and has not been allowed to return. So what do you call that? Does that make sense?

No, no, no, no. This is not correct. And I really don't know where you're getting all those ethnic cleansing claims. I don't know about those reports and who is preparing them, but the Syrian National Coalition, who are the legitimate representatives of the Syrian people, the interim government, the tribal leaders, the minorities, including the Christian communities, are all supportive of the Turkish military operation.

Apparently there are plans from President Erdoğan to move even more Syrians who are currently inside Turkey back into this new safe zone in Syria.

Of course. They should be returning to their homelands.

Right. And that might not equate to ethnic cleansing, but it is a big demographic transformation, isn't it?

It's not a demographic transformation. These people were already flooding into Turkey, escaping from the violence in their own country. And Turkey has been hosting them, has been opening its arms to provide for their needs and to provide them a humane life. And there are 3.6 million of them in Turkey at the moment. And, of course, most of them, they would like to return back to their homes. And Turkey will be providing this by the end of the operation. We hope.