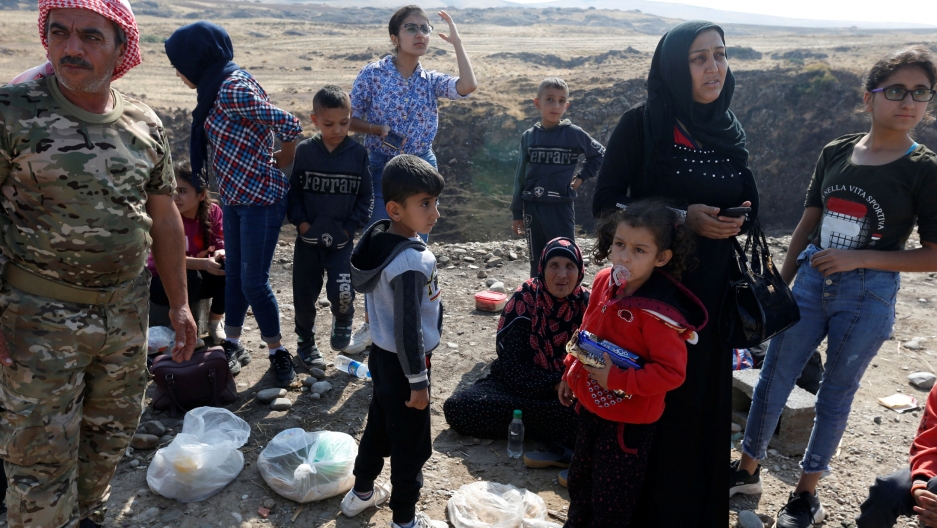 Displaced Kurds stuck at a border after a Turkish offensive in northeastern Syria, wait to try cross to the Iraqi side, at the Semalka crossing, next Derik city, Syria, on Oct. 21, 2019.

The commander of Kurdish forces in northeast Syria told the United States he had met all obligations set out in a US-brokered truce, a senior US official said on Tuesday, as Washington warned it would punish Turkey if it resumes hostilities.

The five-day truce in Turkey's cross-border offensive to allow the withdrawal of Kurdish YPG fighters from the border area ended at 10 p.m. on Tuesday, and Turkish President Tayyip Erdoğan has said Turkey could then press on with fighting.

Earlier on Tuesday, as he flew to Russia for talks on Syria, Erdoğan said hundreds of Kurdish fighters remained near Syria's northeast border despite the truce demanding their withdrawal.

Erdoğan said up 800 fighters from the Kurdish YPG militia had left the area near the border, where Turkey plans to establish a "safe zone" extending more than 20 miles into Syria, but 1,200 to 1,300 of them remained.

However, the senior US administration official said Ankara and Washington were in contact to agree that the withdrawal has taken place, and that Turkey's pause in its military offensive into Syria would turn into a permanent halt of the campaign.

Turkey began its cross-border operation nearly two weeks ago following US President Donald Trump's decision to withdraw American troops from northern Syria. The American withdrawal from Syria has been criticized by US lawmakers, including some of Trump's fellow Republicans, as a betrayal of Kurdish allies who have helped the United States fight ISIS in Syria.

Trump said on Monday it appeared that the five-day pause was holding despite skirmishes, and that it could possibly go beyond Tuesday's expiry, but Erdogan said the fighting may resume.

Related: 'If it wasn't for the Kurdish fighters, we would have died up there'

"If the promises given to us by America are not kept, we will continue our operation from where it left off, this time with a much bigger determination," he said.

Dani Ellis, a 29-year-old British citizen who volunteered to help the Kurds, has been working in Kurdish-controlled areas of northern Syria for the past 10 months. She said civilians continued to be targeted during the five-day pause. She has been part of three convoys in recent weeks, trying to reach injured people caught in the fighting.

She spoke to The World from Tal Tamer, a town just a few miles from the front lines, where Ellis said residents are preparing for the worst.

Marco Werman: What have you been seeing in the last 24 hours?

So, there's tarpaulins. I gather that's not for a shelter. That's for something else. Correct?

It is said that aircraft can't see who is moving in the streets [covered in tarpaulin]. And there was in Sari Kani last week, just over a week ago, I think, a civilian convoy, much like the one that I was part of, drove into the city to pick up the wounded. And it was hit by an airstrike. And they're very keen for this kind of thing not to happen again and are covering as many streets as possible so that these convoys — their fighters, civilians fleeing — no one can be seen from the skies. They can't be targeted anywhere near as easily.

So, was that targeting going on during this five-day pause in hostilities?

Absolutely. The convoys, the first one was fired upon and we turned back the second … when I was on [it], there were new positions on the side of the roads that seemed to be aiming at us. So, we turned back. The third one was fine. We managed to get through into the city, and spoke to the fighters inside the city. And they told us that the only time that the bombing and the shelling and the attacks with heavy weapons directly on the hospital inside the city had eased up was when our convoy was coming in.

Right. So, whatever it's being called — a ceasefire or a pause in the hostilities — it doesn't sound like it actually happened over the past five days?

No. When I was on the first ... convoys, I personally witnessed shelling hitting the city; some showers that landed near us, which we believe were perhaps warning shots. You could hear the thuds. You could see the smoke rising in Sari Kani itself. There was, without a doubt, shells falling, heavy weapons being used.

So, once you are getting some of these people out of this area — I mean, you're speaking with them — what's the morale among the Kurds who you've met?

The Kurdish people are very defiant and they know war very well. They've lived under it. Most of them have lived under it their whole lives in various different ways. They're very good at keeping up a fighting spirit, whether it means going to war, whether it means dealing with the homefront, whether it means taking their friends and their family out of destroyed buildings. They just get on with it. But at the same time, for them, they thought, well, they were certainly expecting Sari Kani, or Ras al-Ain, to be a sort of Kobani moment — Kobani being the city that in 2014 held out against ISIS right until the end and then made a heroic comeback.

Dani, I mean, you've spoken with these fighters. Introduce us to one of them and what's going on in their heads right now.

I can talk about one I met in the hospital the other day, when we got into this hospital and it had been our third attempt. I'm the first successful attempt since the convoy that had been hit by an airstrike. And there were three guys who were standing by the entrance. They were sort of watching us come in. They were very subdued, just watching us. I went over and asked them jokingly how their situation was. And one of them laughed, the other two didn't seem particularly happy with me. But we got chatting and they showed me their wounds. They all had gunshot wounds, one in the arm, both of the others in the leg. They told me that they killed a lot of these Turkish-backed Islamist forces that have been trying the hospital. They'd been hitting armored vehicles, they'd survived airstrikes. They'd survived the war for the last few weeks. They were quite badly injured. One of them couldn't really walk very well. And when I said to them, “Well, we've got this convoy here now, we've come to take you back ... ” they didn't want to come. These guys were bandaged up, but they still had their weapons and that night, at least, they refused to come. And that, to me, spoke volumes.

How do you explain that defiance in the face of this powerful Turkish army?

They fought so hard for so many decades to carve out some semblance of self-determination. And they're not going to give it up. They've tasted freedom and they've tasted self-determination. And it was extremely hard, for one, the scale of destruction that they experienced in the fight against ISIS was similar to the scale of destruction that Britain experienced during World War II. They're not easily going to give up what they've won.