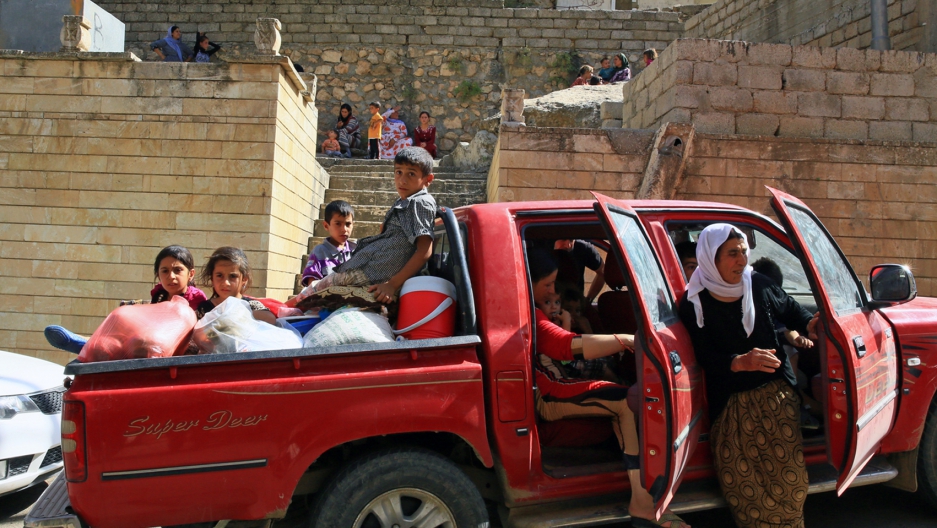 The first families begin to arrive to the holy Yazidi temple of Lalish on Aug. 3. IS launched a sudden and unexpected offensive against the largely Yazidi town of Sinjar that day. Some fled to the homes of relatives and friends, while others took shelter in temples and schools.
Credit: Tracey Shelton
Share

ZAHKO, Iraq — They camp in schools and public parks. Some sleep in construction sites or by the roadside. They escaped the Islamic State by fleeing into the Sinjar Mountain range where they almost starved and many died from the elements.

They are Yazidis, members of an ancient religion wrongly accused of devil worship, a claim based on a linguistic coincidence and which has led to centuries of persecution at the hands of their Muslim neighbors. This time the threat is from the newly declared Islamic State.

Despite a widely publicized US bombing campaign to save them, family after family tells the same story of escape: While the Western media narrative has emphasized the US role and that of the Iraqi Kurds’ peshmerga fighters battling IS in recent weeks, it was instead the Kurds coming in from Syria and Turkey who saved the Yazidis’ lives. A limited number were airlifted off the mountain, but the mass exodus took place on foot. The much-vaunted peshmerga, meanwhile, initially ran.

“The PKK [a political and militant Kurdish party based in Turkey] saved us. They cleared a path for us so we could escape the Sinjar Mountains into Syria.”

“Thank God for the PKK and YPG [a Syrian branch of the PKK].”

“If it wasn’t for the Kurdish fighters, we would have died up there.”

The PKK, or Kurdistan Workers Party, has been condemned as a terrorist organization by the US for a four-decade campaign for Kurdish independence against the Turkish government — but among the Yazidis they are being hailed as heroes. While the US began bombing IS positions, it was the PKK who entered the mountains with trucks and tractors to carry out the sick and elderly into Syria, while militants from the PKK and YPG held off IS advances.

Both the PKK and YPG follow the ideology of Abdullah Ocalan, imprisoned in Turkey since 1999. Their beliefs include the empowerment of women, and their military ranks famously include hundreds of female fighters and commanders. YPG, with support from the PKK, have been battling Islamic extremists in Syria since they first rose to power in late 2012.

While it is unclear the extent to which US aid drops and airstrikes directly aided the Yazidis who survived their Sinjar Mountain ordeal, there can be little doubt the most essential rescue mission was carried out by Kurdish coalition forces led by the PKK.

The Hassan family owe their lives to a group of brave Kurdish fighters who held back an onslaught of IS militants as they escaped the mountain in a borrowed vehicle.

“The situation was crucial,” said Mikey Hassan, describing the hunger and sickness that had gripped his family after they fled to the mountains on Aug. 3. “We heard the YPG had cleared a path through to Syria so we walked 17 hours to get there.”

En route, Hassan’s young nephew, 4, succumbed to thirst and the elements. They buried him there in the mountains and continued their journey, carrying the children and elderly on their backs.

“Me and my brothers, we each had one of the kids on our backs and AK-47s in our hands as we ran. [IS] have top vehicles so we knew if they came we had no chance.”

Eventually, Hassan managed to borrow a vehicle from another family on the mountain. He promised to come back for them once his family was safely in Syria. They packed the family members into the truck.

“As we neared the path, we came under fire from two sides. Me and my brothers were shooting from the back of the vehicle. We couldn’t always see them so we were just shooting randomly to scare them. Can you imagine the kids and the women on the back of the truck? It was packed with people and we were in the open under fire,” Hassan said.

Then, from the Syrian border came fighters from the YPG. They held back the IS militants long enough for the family to cross the Syrian border into YPG-held territory. After several days in a refugee camp in Syria, the family crossed back into the Kurdish region of Iraq, where they now live in a school in Zahko.

The families in this area all say they were rescued from the mountaintop by YPG and PKK forces, many by tractors that drove into areas of the mountain impossible to reach by car. The sick, the young and the elderly who could no longer walk were carried down this way, while thousands of others crossed by foot on the path cleared by Kurdish forces.

Many felt betrayed by Iraqi Kurdish forces who withdrew from their cities, leaving civilians behind without warning as IS militants attacked.

“There were more than 250 peshmerga in Sinjar. The people felt safe. They believed they would fight for them,” said Dr. Salim Hassan, who heads the Committee for Yazidi IDPs (internally displaced people) in Sulimaniyeh. “But these forces withdrew in the night with no warning to the people.”

Following the withdrawal, Kurdish president Masoud Brazani promised to investigate and punish peshmerga officers who left the city of Sinjar and the estimated 50,000 Yazidis living there, with nowhere to run but Mount Sinjar.

Hassan, a professor of geology at the University of Sulimanieh, said the mountain range plunges into Syria on its southern side.

“The PKK came through this plunge and opened a path for the people,” he said, estimating at least 35,000 people were saved through their efforts. “All this is by the effort of the PKK.”

Despite the US announcement of mission accomplished, Hassan estimates between 5,000 and 10,000 people remain trapped. The mountain range is limestone, he explained, and contains around 300 caves. Recent assessments on the condition and number of survivors appear to be more guesswork than fact, as family after family reported having relatives still trapped on the mountain in dire need of medical attention.

“I have nine relatives still trapped there,” said Ibrahim Ahmo, who is currently staying at Lalish Hall in Duhok with more than 1,000 other displaced Yazidis. “They are with a group of 40 and all of them are sick. They can’t walk but I have phone contact with them. If the US will send a helicopter to get them I can give them the exact location. But people said they called off the missions. Why would they do this? Is it true?”

But displaced families had not given up hope of a US rescue. They called on the US and other nations to grant asylum. Others clutched letters and IDs from the US forces they worked with years before. They had heard rumors that IS has been hunting down anyone with US connections, making them marked men. They begged for the US Army to grant them asylum based on their faithful service.

PKK forces have now moved in to Iraq to fight alongside the Kurdish peshmerga, aided by US airstrikes on Islamic State positions. In the south, Iran has joined the battle against IS with Iraqi government troops and Shia militias. Negotiations are also underway with hardline Sunni groups that have until now supported IS. Hopes are high that, like Iran and the PKK, they too may join the ranks of former US enemies now cooperating in an effort to eliminate this growing threat.