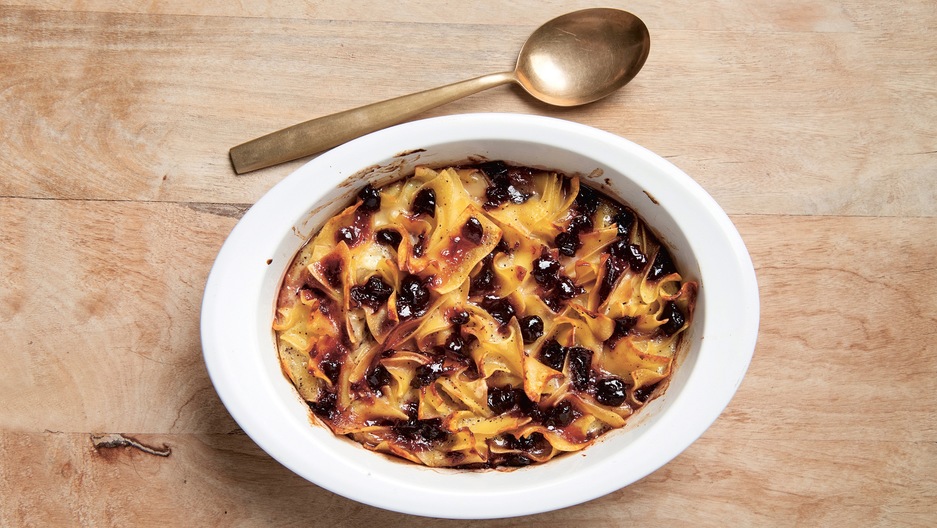 Kugel is a traditional dish for Yom Kippur. This casserole dish can be a savory square of potatoes and onions, or a sweet dessert full of noodles and cheese.

From "The Jewish Cookbook"/Courtesy of Phaidon

Yom Kippur, which began Tuesday evening and ends late Wednesday, is when many Jews reflect on the sins of the past year by fasting. And when they break that fast, after sunset, it’s usually with a feast.

A table filled with bagels and lox, coffee and sweets — and kugel. This casserole dish can be a savory square of potatoes and onions, or a sweet dessert full of noodles and cheese. Which got The World wondering — with such a range, what is kugel? To dig into the rich history of this rich dish, let's start in the kitchen.

Related: On Yom Kippur, remembering Mosul's rich and diverse past

Sonya Sanford is the daughter of Jewish refugees from Ukraine. So, it’s no surprise that when it comes to kugel, she reaches for root vegetables.

“Anytime there's some kind of fried potato around, I think of my grandmothers. And those smells, those textures, are just so central to the cuisine I grew up eating.”

“Anytime there's some kind of fried potato around, I think of my grandmothers,” Sanford said, adding, “And those smells, those textures, are just so central to the cuisine I grew up eating.”

Sanford runs Beetroot Market and Deli in Portland, Oregon. To make kugel at Beetroot’s kitchen, Sanford peels a mess of potatoes and onions, grates them, and seasons it generously with salt and pepper. She stirs in a few eggs, and then she heats up the oil until it’s screaming hot, and pours it — carefully — directly into the batter.

Related: My sins are cleared for the year, but the chicken wasn't so lucky

“That's part of the secret to the texture of kugel,” Sanford said. “When you do add boiling hot oil to the batter, somehow, magically, it becomes softer.”

And it’s part of the secret of Eastern European peasant cooking, in general. Avery Robinson, a cultural and culinary historian who wrote his dissertation about kugel, explained, “You can turn your potato, that simple root vegetable, with a little bit of onion, a little bit of egg, a little bit of pepper, into a red-letter feast. Something that’s so much more than the everyday.”

This kugel transformation he talks about — from the everyday potato to a holiday specialty — is even immortalized in a Yiddish song.

Related: Jewish vegetarians say you don't have to make brisket for Passover — and they've got the recipes to prove it

But despite the catchy tune, Robinson says kugel actually developed centuries before these New World potatoes were even part of European cooking.

“The earliest reference we know to kugel is from the 13th century, in Germany. And it was essentially a dumpling.”

“The earliest reference we know to kugel is from the 13th century in Germany. And it was essentially a dumpling.”

These breadcrumb dumplings, bound with beef fat, were dropped into cholent, a Sabbath stew of meat and beans. As the soup simmered overnight, the dumplings absorbed the flavorful broth.

But over time, kugel moved out of the cholent pot and into its own casserole dish.

Leah Koenig is a food writer and cookbook author, most recently of “The Jewish Cookbook.” She says that as kugel moved out of the stew pot, it also went from being just fat and breadcrumbs to incorporating all sorts of ingredients. 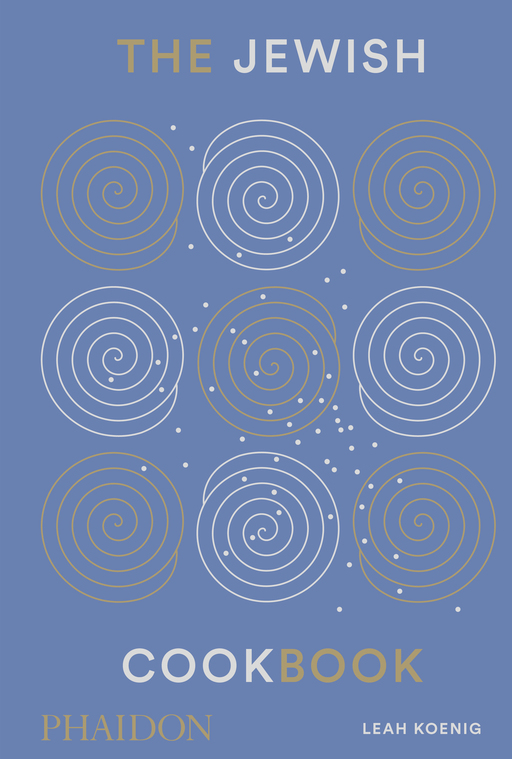 Cookbook author Leah Koenig says that to be kugel, you need to have three things: fat, starch and eggs.

From "The Jewish Cookbook"/Courtesy of Phaidon

Related: Thank the Ottoman Empire for the taco al pastor

“Potato is the most well known,” Koenig acknowledged. “But you would see kugels made of rice, noodles — also sweet and savory. Today, you'll find everything from broccoli to cauliflower, spinach.”

Koenig says that to be kugel, you need to have three things: fat, starch and eggs. Beyond that, it’s pretty much a blank canvas. And the way you paint it tells the story of your family.

“If you're Romanian, you may have a cornmeal one. If you come from a religious background, you're almost certainly going to have the Yerushalmi one with the caramelized sugar and the black pepper, because that developed in Jerusalem in the very religious communities.”

If your family immigrated to the American South, it might be sweet potatoes. And if your family was in America in the 1950s, you might top your kugel with Corn Flakes.

“That's such an American expression of the dish, to take a Kellogg’s breakfast cereal and top a noodle kugel with it,” Koenig laughed. “And it is delicious, by the way! Having that crunch is so wonderful.”

Throughout history — throughout the world — people have made kugel their own. It’s comfort food. Not just because of all the starch and fat and carbohydrates — although those certainly don’t hurt. But because it connects people with their past, with a sense of who they are. And for a lot of people, it wouldn’t be a holiday without it.

In a small bowl, whisk the eggs with salt and pepper. Using the shredding attachment of a food processor, or using a box grater, grate the onion. Next, shred all of the potatoes. Transfer the onion and potatoes to a large mixing bowl. You may need to do this in batches depending on the size of your food processor. Pour the egg mixture over the potatoes and onion and mix.

Working as quickly as possible, take the baking dish with its heated oil out of the oven. Carefully pour the hot oil straight into the batter, and mix everything together quickly until just incorporated. Pour the batter into the hot baking dish, and even out the top of the kugel with a spatula or wooden spoon to ensure it cooks in even layers.

Bake until golden brown and potatoes are cooked through and tender, 40-50 minutes. Rotate during cooking to make sure it is evenly browning. If the top of the kugel is getting too brown, but the potatoes are not cooked through, place a loose piece of foil over the kugel for the remainder of the cooking time.

Kugel can be made up to two days ahead and reheated in the oven.

Hungarians have a particular fondness for poppy seeds, often pairing them with pastries and noodle dishes. Here, the dusky seeds add a nutty flavor to a baked lokshen (noodle) kugel. The dollops of jam threaded throughout make this kugel equally appropriate as a side dish, a dessert or the centerpiece for brunch.

Preheat the oven to 350 F. Lightly grease a 9-inch x 13-inch or 3-quart baking dish. Bring a medium pot of water to a boil over high heat. Add the noodles and cook until just short of tender, 5–7 minutes. Drain and set aside.

In a large bowl, whisk together the oil, applesauce, eggs, sugar, vanilla, salt, and cinnamon until fully combined. Grind the poppy seeds in a spice or coffee grinder until just ground but not powdery (about 10 seconds). Add the ground poppy seeds and the cooked noodles to the egg mixture and stir to fully combine.

Transfer the mixture to the prepared baking dish. Take a teaspoon of the jam and dot it on top of the kugel, using the spoon to nestle it in the noodles. Repeat with the remaining jam, taking care to space the jam out evenly across the kugel. Bake until the kugel is set and golden brown, about 40 minutes. Transfer to a wire rack to cool for about 20 minutes before slicing. Just before serving, use a fine-mesh sieve to lightly dust with cinnamon. Serve warm or at room temperature.

(Recipe adapted from “The Jewish Cookbook” by Leah Koenig.)

Correction: An earlier version of this story referenced lard in an early recipe for kugel. It has been updated to beef fat.