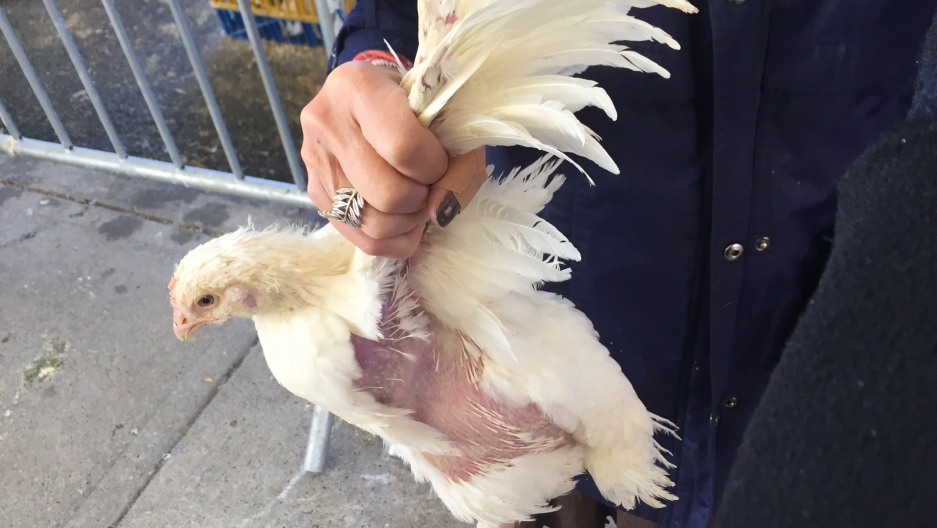 For the Jewish ritual of Kaparot, a person's sins are symbolically transferred to a chicken, and then the chicken is slaughtered.

The day before Yom Kippur, my mom and I wander down Flushing Avenue in the Williamsburg section of Brooklyn, looking for Cohn Live Poultry. We know we have the right place when we hear the clucking.

A semi-trailer truck is parked outside the warehouse, piled high with cages, and crammed with chickens — chickens that don’t have much more time on this earth.

We’re here to participate for the very first time in the ritual of Kaparot — or “schlogging kapores” in Yiddish — in which Orthodox Jews take live chickens and swing them over their heads three times while saying a prayer. The chickens are then slaughtered and the carcasses donated to the poor. This year, an estimated 50,000 chickens will be sacrificed this way in Brooklyn.

My mom and I make our way over to the ticket booth and ask for two tickets for two female chickens. If we were men, we would need to buy male chickens. 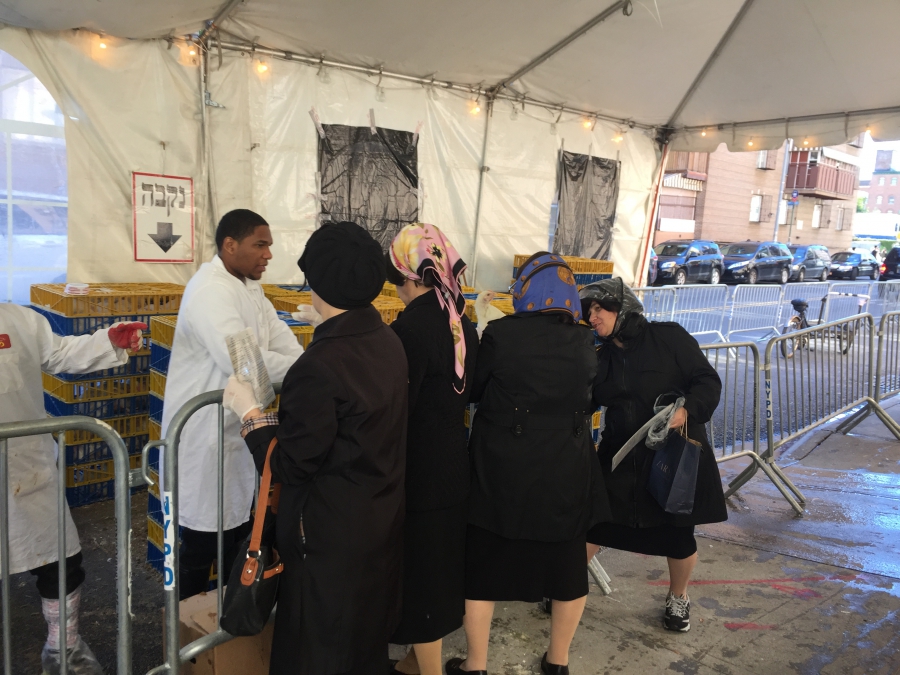 Women line up to get their chicken for the ritual of Kaparot.

The cashier rings up our total: $34. My mom hands over her American Express.

We shuffle to a canopied area and give a worker our pink tickets (pink for female chickens, blue for male chickens). He reaches into a cage, grabs a chicken at the base of the wings, and passes it to my mom.  She looks terrified (my mom, not the chicken).

Luckily for her, there’s a very nice Israeli man who offers to swing the chicken over her head for her, while she says the prayer from a laminated card.

My mom intones the words in Hebrew: “This is my exchange. This is my substitute. This chicken shall go to death and I shall proceed to a good, long life and peace.”

With that, my mom symbolically transfers her sins to the chicken, and wipes her slate clean for the New Year. The chicken isn’t so lucky.

The man who helped my mom twirl the chicken tells us the most important part of the ritual is to watch the butcher cut the chicken’s throat.

“I want to see it killed because some people will sell the chicken again and again” to unsuspecting penitents, he warns us. 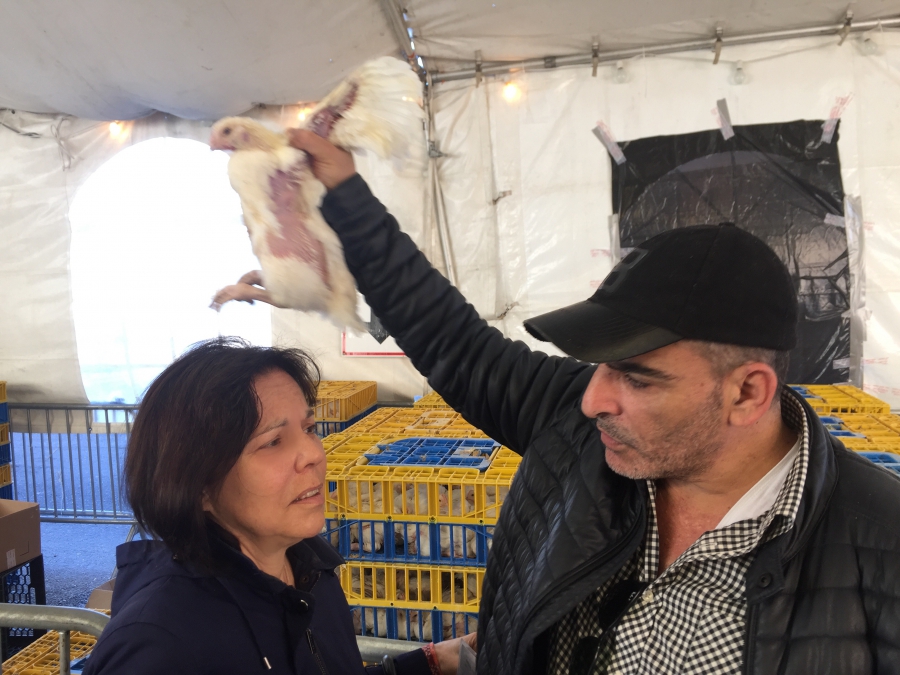 My mother, Barbara Rosenthal, gets some help with the Kaparot ritual. An Israeli man offers to swing the chicken over her while she intones the prayer.

After our chickens’ untimely death, my mom and I walk back to the car in stunned silence. Before she puts her key in the ignition, I turn to her: “Do you feel less sinful?” 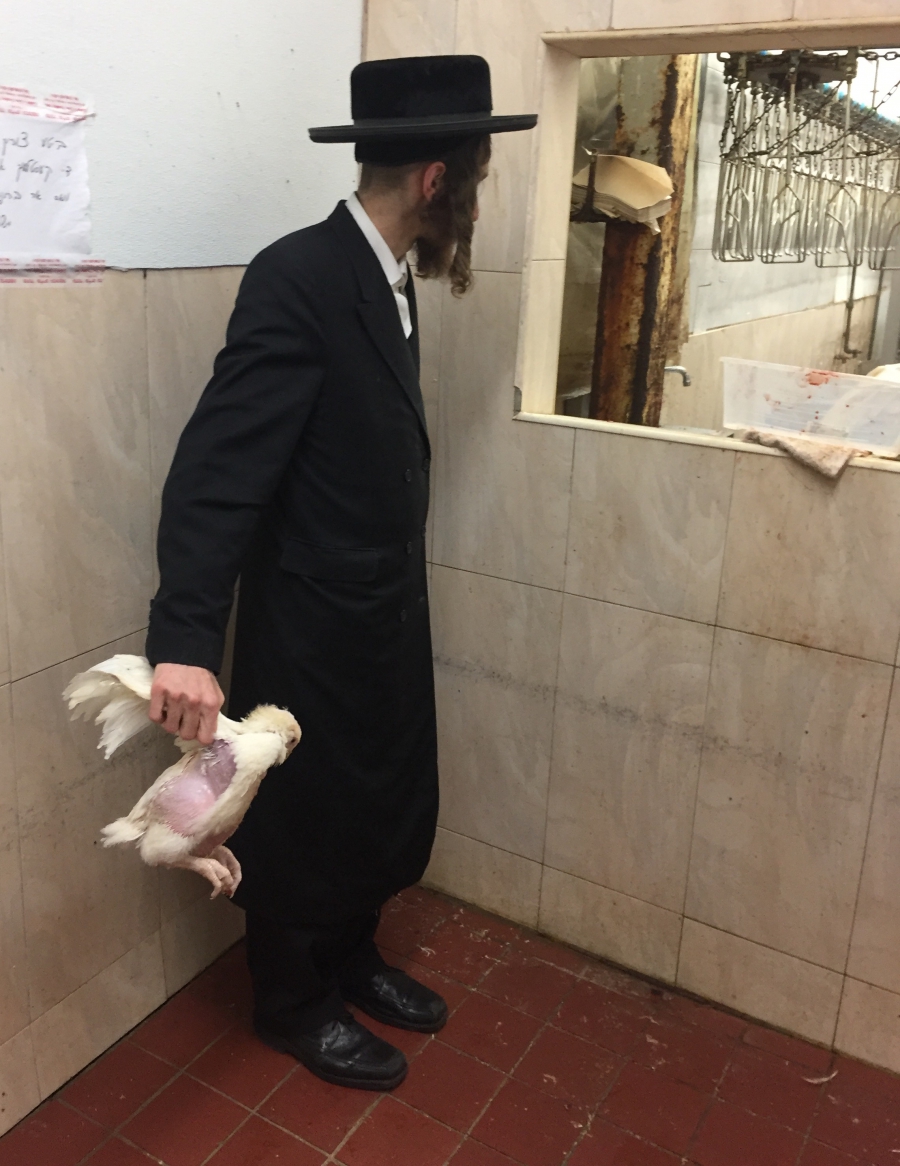 Preparing for the Jewish ritual of Kaparot.

“I’ll feel less sinful when I give up chicken. I’m going to be a vegetarian,” she says, laughing.

“Why did you want to do this in the first place?” I ask.

“I have a certain nostalgia for shtetl life,” she confesses. It’s because her father, my zeide, always speaks with tenderness about his life before the Nazis, in the rural town of what is now Comlăușa in Romania.

“He tells charming stories about how he used to schlog kapores before the holidays,” my mom says.  “I just thought it would be interesting if I could find any meaning in it.”

Ultimately, though, my mom says the ritual fell flat for her.

“The whole thing is nuts,” she says. “We’re walking down the streets of a city. There were bins of chickens on the sidewalk. It doesn’t seem organic to what you’re doing. It seems like it’s been shipped in from some other world.”

Like many rituals transplanted into a modern world, Kaparot is generating a lot of controversy.

Later in the evening, I walk to the Crown Heights neighborhood of Brooklyn, another Hasidic area. The group United Poultry Concerns — which says on its website that it opposes “the use of chickens as symbols of atonement” — is holding a protest. 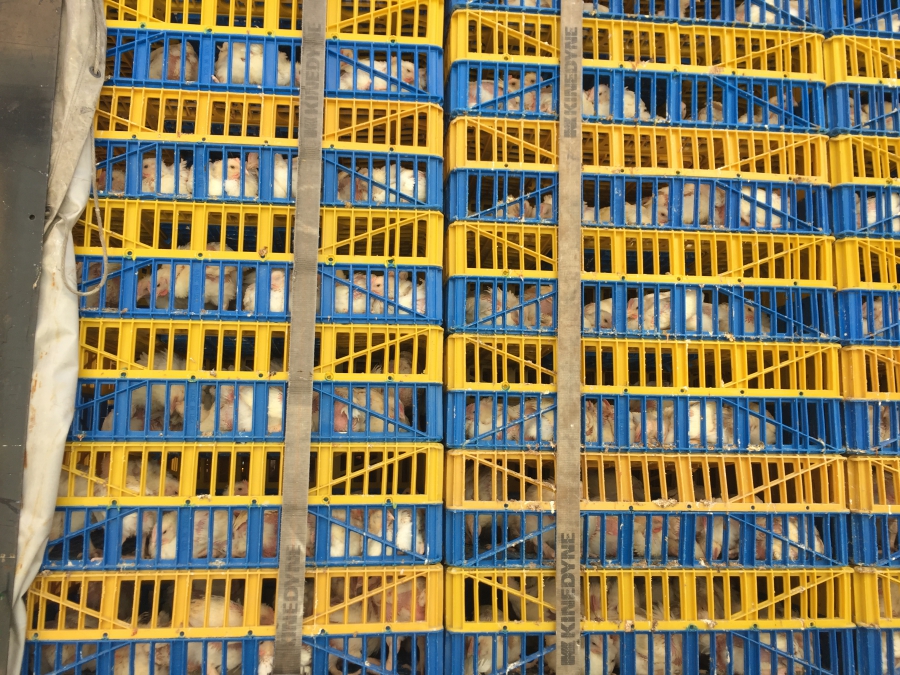 The chickens for the Kaparot ritual are stacked in crates. Animal rights activists have filed lawsuits, calling for a halt to the practice.

About 50 picketers hold placards with pictures of gory chicken carcasses. They chant, “For the chickens in their plight, we will not give up the fight!” They stand on one side of the street while groups of Hasidic Jews stand on the other.

One protester crosses the divide.

Neeve Bailey is a 21-year-old vegan from Israel. He speaks to the local community in Hebrew, telling them that rabbinically, it’s just as acceptable to wave coins around your head for Kaparot as it is to wave a live chicken.

“Go ahead! Do Kaparot,” he says. “But do it in a way that doesn’t hurt animals.”

A Hasidic man who wouldn't give his name says that yes, some people perform the ritual with money, but “the Holy One Blessed Be He” wants the Jews to perform Kaparot with a chicken and “if that’s what Hashem wants, that’s what Hashem’s going to get.”

In the end, the two men shake hands and wish each other a Happy New Year.

Not all disagreements over Kaparot end so amicably.

Animal rights groups are suing rabbis and congregations across the US. Just this week, a federal judge in Los Angeles ordered an emergency injunction to stop the ritual (the injunction was lifted just before the start of Yom Kippur). Similar lawsuits in New York and Detroit have failed.

The lawsuits allege that the chickens are crammed tightly into cages and mishandled. From my experience, I can say that’s definitely true. The actual slaughter, though, was swift and the meat from the chicken is donated to the poor.

That said, my mom tells me once was enough.

“I won’t be schlogging kapores again,” she says. “I’ve already done it. Thank you.”

That goes for me, too. 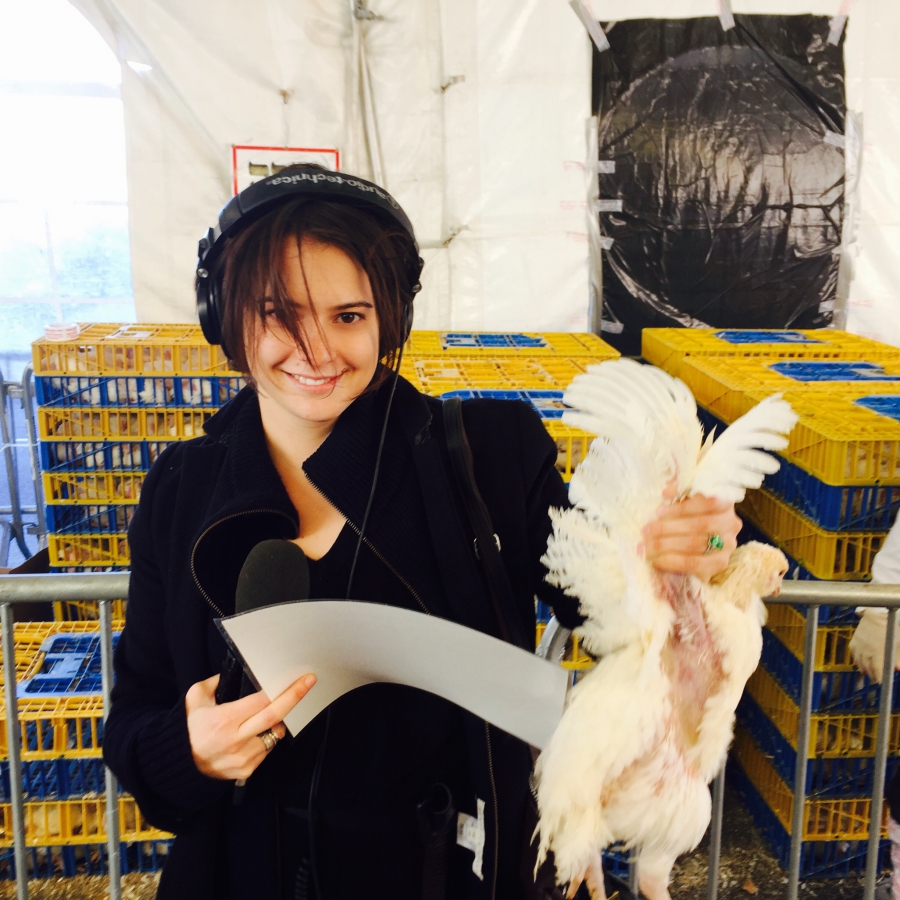 Sarah Birnbaum with her Kaparot chicken.