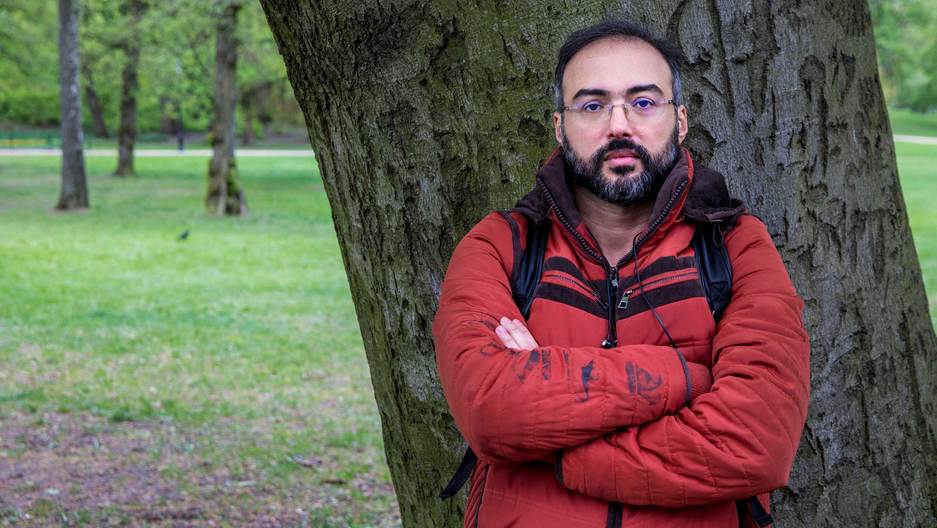 Author and blogger Iyad el-Baghdadi poses for a photo in May 2019. He says he is under protective custody in Norway after the CIA warned him that he was under threat by Saudi Arabia.

This weeks marks one year since the killing of Saudi dissident Jamal Khashoggi.

Khashoggi, a Washington Post columnist who lived in Turkey as an exile, was murdered on Oct. 2, 2018, inside the Saudi embassy in Istanbul. His dismembered body has never been found. A global outcry ensued and led to US Treasury sanctions on 17 Saudi individuals, and a Senate resolution blaming Crown Prince Mohammed bin Salman.

Saudi officials have denied suspicions in the CIA that Crown Prince Mohammed, or MBS, ordered the killing. Eleven people are on trial in Saudi Arabia.

İyad el-Baghdadi is a fellow dissident and exile living in Norway. He was forcibly exiled in 2014 and later applied for asylum in Norway.

"The history of the threats against me really started less than two weeks after Jamal's murder," he told The World's Marco Werman. "That's when I was first made aware through a private contact that I am on some sort of a list that someone in the Saudi royal court had been building of dissidents who should be silenced."

Marco Werman: Do you know if you were on that list before the murder of Khashoggi?

Iyad el-Baghdadi: As far as I have been told, I was not. But after the Khashoggi murder, it seems that my call for justice for Jamal, really in taking up a lot and continuing a lot of his projects — the projects that we had started together, really, before his murder — I think that kind of caught their attention.

What was your relationship like with Jamal Khashoggi? Were you political allies?

I describe it as a complicated relationship and has ups and downs. As you know, Jamal Khashoggi spent an entire career working for the Saudi regime. So, he was one of their trusted advisers, he was someone who they relied upon for his analysis. Something changed in Jamal after 2011, after the Arab Spring uprisings. I mean, I tell people that I feel that Jamal moved towards me rather than me moving towards him. I think he realized once he was in exile, he realized that the era of normal politics in Saudi Arabia were over. And the way in which he used to wield some kind of influence with the Saudis, with the Saudi royals, it just [was] no more. And I think he started to actually understand the value of activism.

"I think he realized once he was in exile, he realized that the era of normal politics in Saudi Arabia were over."

Have you received any other threats or warnings since last October? Do you feel like your life is in danger today?

Well, of course, the biggest warning really came when Norwegian intelligence agents visited me at my home. This was in late April earlier this year. They took me away and they told me that I'm the target of a Saudi threat. Since then I have been under protection, by the Norwegian authorities.

Khashoggi was killed in Istanbul but essentially in Saudi territory — their consulate in Istanbul. Do you feel safe with political asylum on the streets of Oslo? Like how long really are the arms of the Saudi kingdom?

We feel that it's not just the Saudis that we have to worry about because the Saudis could subcontract a job like this to someone else. Now, that said, Norwegian security services are pretty professional. They know what they're doing. I definitely feel safe in their hands. And the main threat that really we have been focused on, really, is the digital threat because even if they want to hurt you physically, it also makes sense for them to try to hack into your device first, because that's how they can try to locate you, they can find out where you are and at a particular time of the day. So all of that really factors in.

Well, it's the digital threat I want to turn to next — these high-tech tools that allegedly are being used by Saudi Arabia and that have raised suspicions. There was a Saudi dissident in Montreal who had his smartphone taken over by spyware that allowed his conversations with Jamal Khashoggi, in fact, and others to be heard by Riyadh. Do you worry you may be targeted in the same way or maybe even are?

Well, in fact, it was in late May of this year. I was informed that my communications were intercepted and they managed to install the software on my phone and I immediately got off the phone and I had to climb onto a much more complicated kind of digital infrastructure to make it difficult for this to happen again. So the software is called Pegasus, it is the product of an Israeli security company called NSO and the Saudis procured it from the Israelis in, I believe, November 2017. Many governments have these kind of really sophisticated software, but then you're not really supposed to use this kind of military-grade software against political dissidents, or journalists, or human rights activists.

"The moment Trump is out of office, that's when the real backlash starts."

Things got a little shaky for Mohammad bin Salman after the international community really criticized harshly what had happened to Khashoggi in Istanbul. But would you say the Saudi government's efforts to silence dissent are getting more aggressive?

Well, it's a bit of both. First of all, I think the reason why they have to try so hard to silence dissent is that there is a lot of dissent. In other words, they have created a whole generation of new activists. The Saudi population was not known for political activism before, but now we have an entire community of Saudi dissidents. I mean, being a political dissident myself, someone who is a political refugee, I know how it is. It takes you a couple of years to settle down into a new life before you can actually be effective again. So this is something that is going to be a long-term problem for MBS.