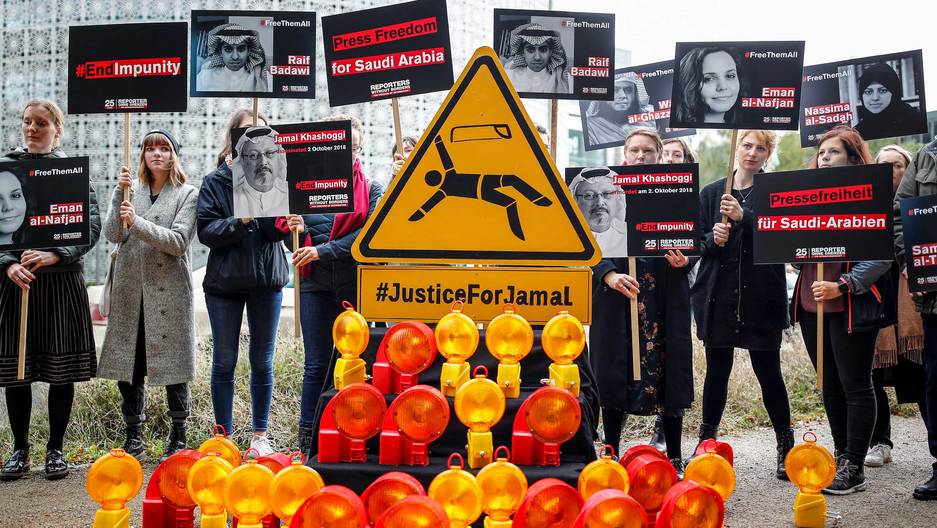 Activists of the organization, Reporters Without Borders, protest in front of the embassy of Saudi Arabia to commemorate the murdered Saudi journalist Jamal Khashoggi, in Berlin, Germany, on Oct. 1, 2019, one day before the first anniversary of Khashoggi's death.

It has been a year since the brutal murder of Saudi Arabian journalist Jamal Khashoggi sparked outrage — and inaction — over Saudi government human rights abuses.

Khashoggi, formerly an adviser to the Saudi royal family, became a well-respected commentator on the Middle East and critic of Crown Prince Mohammed bin Salman. With increasing restrictions on his freedom of speech in Saudi Arabia, Khashoggi moved to the US in 2017. He was killed in the Saudi embassy in Istanbul, Turkey, on Oct. 2, 2018, while picking up papers for his impending marriage.

"We lost one of those few beautiful, irreplaceable people that the world could really cherish."

“We lost one of those few beautiful, irreplaceable people that the world could really cherish,” Hatice Cengiz, Khashoggi's fiancée told The World last week through an interpreter. “He was such a precious person.”

Khashoggi's disappearance and death brought unwanted attention to the Saudi regime. It has also challenged world leadership to take a stand for human rights, press freedoms and rule of law. It's a responsibility that has been largely shirked on this grim anniversary, say Cengiz and others, with little international action to hold Saudi Arabia to account and continued close relations with the oil-rich kingdom. 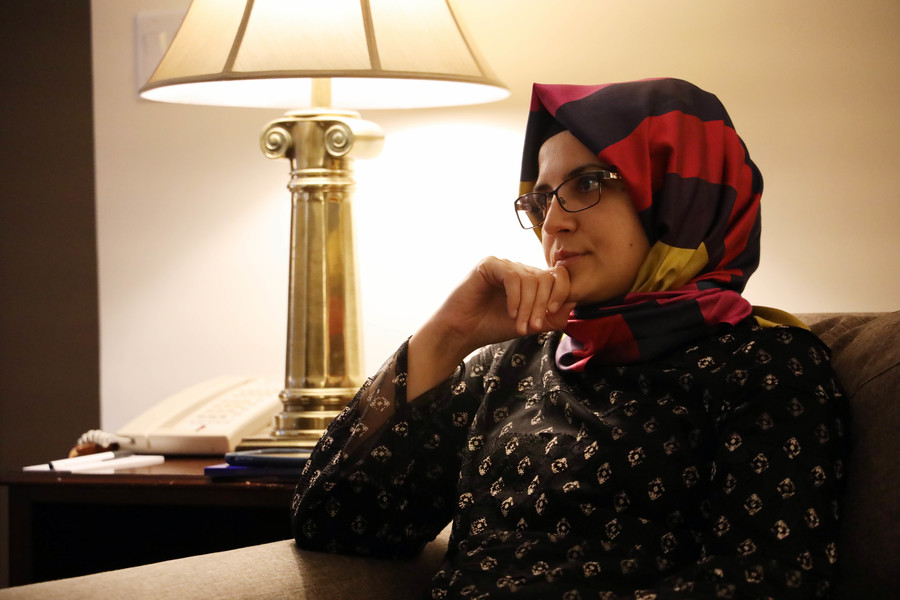 Hatice Cengiz, fiancée of slain journalist Jamal Khashoggi, says after a year of failing to hold Saudi Arabia to account, her faith in international institutions has faltered.

“A right to life of a person was violated, a person was massacred,” Cengiz said. “It's so sad to see that the world order cannot defend a right of a victim, a person who was assassinated.”

"It's so sad to see that the world order cannot defend a right of a victim, a person who was assassinated."

She says her faith in international institutions has faltered. “It looks like the entire world agreed on silence and sealed their lips.”

Listen to Cengiz talk about justice for Khashoggi, below:

But Cengiz is just one of the women close to the center of Saudi government oppression who is fighting for the international community to live up to its mandate to protect human rights. The World also spoke to two other advocates for justice in Saudi Arabia during the UN General Assembly in New York. 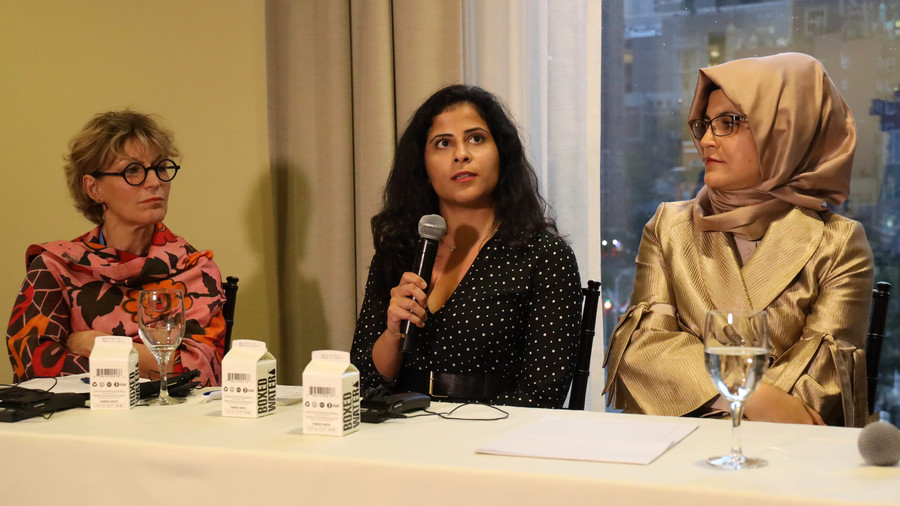 Agnes Callamard, Lina al-Hathloul and Hatice Cengiz speak at a Human Rights and Freedom Under Seige event in New York City on Sept. 26, 2019.

Agnès Callamard is one of those advocates. She is the UN special rapporteur on extrajudicial, summary or arbitrary killings and conducted an in-depth investigation into the execution of Khashoggi.

“It is a slap, in my view, in the face of all those who have campaigned for human rights protection in Saudi Arabia,” Callamard said of the global response.

She said her investigation found that “the killing of Mr. Khashoggi was planned, premeditated, organized.” It also “highlighted evidence pointing to the possible responsibility at the highest level of the government, including of the crown prince.”

Salman has denied ordering the assassination.

Callamard said her report conclusions demand that Saudi Arabia — and Salman — be held to account for their role in the murder. Saudi Arabia botched the crime scene investigation and their trial of 11 suspects involved in the killing is in violation of international standards, Callamard said. She has called for a subsequent international criminal investigation — one the UN Secretary-General has failed to initiate.

On the contrary, the crown prince has been fêted, rather than shunned by the world's top leaders.

“All the members of this international community have been more than willing to return to business as usual,” Callamard said. “That was sadly demonstrated during the G20 meeting in Osaka where American President [Donald] Trump and others went out of their way to welcome, if not celebrate, the crown prince of Saudi Arabia.” 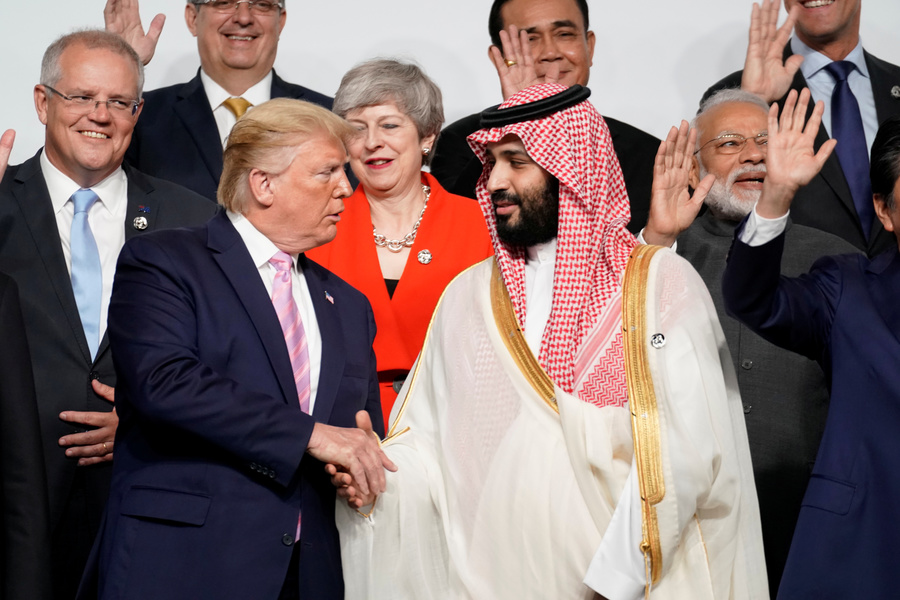 In no small part, Callamard said, Salman's continued warm reception is thanks to Saudi Arabia's geostrategic and economic might — power that it has used to “pay its way out of accountability.” World leaders have appeared impotent against Saudi Arabia's oil and financial influence.

The kingdom is a key ally of the US, particularly with regard to Iran, and the cozy relationship between Salman and Trump has largely shielded the prince from negative repercussions. It's a failure of democratic principles, Callamard said.

"All the members of this international community have been more than willing to return to business as usual."

She has advocated for the international community to upscale sanctions to target higher-level officials — possibly including the crown prince — and to halt exports of surveillance technology, which is being used to limit freedom of expression in the kingdom.

“The lack of commitment to hold Saudi Arabia to account, coupled with the commitment to continue political and commercial and financial relationship with Saudi Arabia, is sending an extremely wrong message to the international community. That message is, if you have the financial might, then you can do more or less whatever you want,” Callamard said. “There could not be a worse message to send at a time where the multilateral system is under attack, at a time where an increasing number of governments are suggesting that international human rights norms are not those upon which that international system should be built.”

The Saudi government has an abysmal human rights record. But Salman has taken up the mantle of “reformer” in the country. He's worked to refurbish Saudi Arabia's image on the world stage, ushering in social changes such as lifting the ban on women drivers and loosening male guardianship restrictions. But there is an insidious irony to these reforms.

Loujain al-Hathloul, 30, is one of the most visible women's rights activists in the region, and is well-known for her advocacy work on lifting the ban on women drivers. But just weeks before that reform came into force last summer, Loujain al-Hathloul, along with other activists, was arrested. She was then tortured.

In March 2018, Loujain al-Hathloul was kidnapped from the United Arab Emirates and told to shut down her activism. She did as she was asked, but then was arrested without warning, her sister said. She's been in prison since May 2018.

“She literally went silent when they asked her to be silent,” Lina al-Hathloul said. “She stopped talking, she stopped social media. But they still arrested her. They still did the worst. They made her life hell when she respected everything they wanted her to do, so, honestly this arrest was really unexpected.”

She said the Saudi government is reticent to allow public participation in reform.

“It's like they don't want anything or any decision to be made or even initiated by the people, by the citizens,” Lina al-Hathloul said. “I am really happy that these reforms have been made. But the ones who have been thinking about them and who have been giving the social conscience … are now in prison.”

Despite some progress, Salman's social reforms are not indicative of structural changes — at least not in the realm of human rights.

“The regime action to silence, curtail, imprison those that criticized the regime has continued unabated,” Callamard said. “So, contrary to what the Saudi Arabia government may suggest, in terms of embracing new values, the reality on the ground is very different. Yes, some changes have been made that need to be welcomed … But the political silencing of opponents, of human rights defenders, of activists of all kind, of women who have only advocated for their right to drive — that has not changed one inch.”

Hatice Cengiz, Khashoggi's fiancée, agrees. Cengiz, who is an expert on the Arab Gulf countries in her own right, said the region has a long way to go when it comes to human rights. 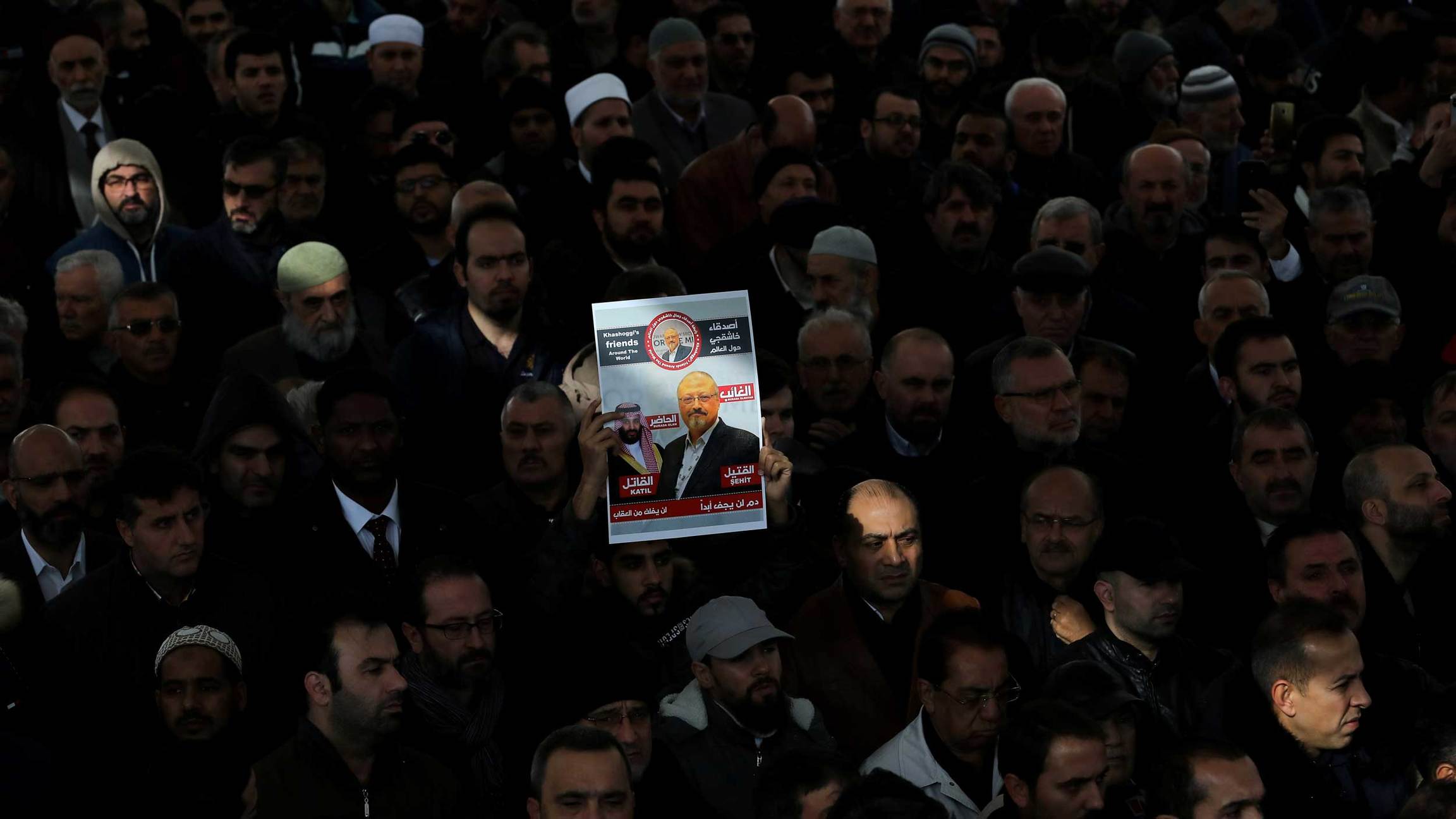 People attend a symbolic funeral prayer for Saudi journalist Jamal Khashoggi at the courtyard of Fatih mosque in Istanbul, Turkey, on  Nov. 16, 2018.

Celebrating what Khashoggi stood for

Callamard has advocated for the UN to adopt a resolution that would lead to establishing a standing instrument to investigate targeted killings, but on the anniversary of Khashoggi's death, she said she is also going to remember the values he upheld in his life's work.

“I am going to celebrate the values of press freedom, freedom of expression and independence of mind that he worked for and died for,” Callamard said.

For Cengiz, the past year has been traumatic — it has been difficult to accept the loss of her fianceé. She said family and friends have personally helped her live through Khashoggi's murder, as has her faith.

“Without having such a belief in the fact that someday we all will be held accountable for our deeds and actions, I think I wouldn't be able to overcome this period.”

But for world leaders, a year spent thus far debating justice is far too long, she says.

“We don't live in the Stone Age right now. And so the ones who are responsible should be held accountable and they should not be allowed to do away with Jamal's murder,” Cengiz said. “I think we all owe this to humanity.”