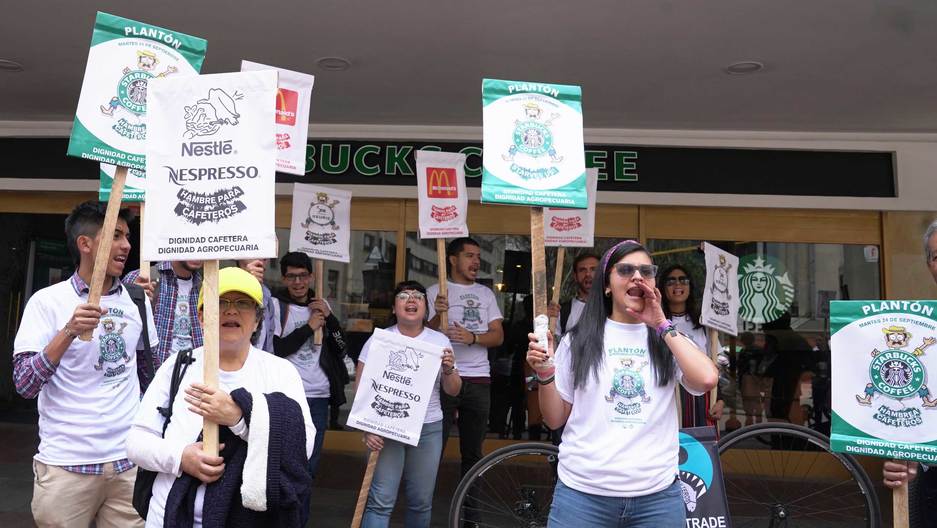 Activists protest low coffee prices outside a Starbucks in Bogota, Colombia, on Sept. 24. Over the past five years, the standard market price for wholesale Arabica coffee has dropped from $2.40 to $1 per pound.

Henry Calvo screamed into a megaphone on Tuesday as he led a protest outside a Bogota Starbucks to demand better prices for coffee growers, like himself.

Wearing a straw hat and a T-shirt depicting the famous Starbucks mermaid as a skeleton, Calvo led angry chants against “imperialist” companies that he accuses of ripping off coffee farmers.

With $6 lattes now the norm at places like Starbucks, it may not seem like coffee is getting cheaper. But the price that most farmers around the world get for their coffee beans has dropped by half over the past five years, and is forcing many to switch their crops, migrate to other countries, or continue to produce their beans under belt-tightening circumstances.

Related: That coffee you are drinking might not be so fair trade after all 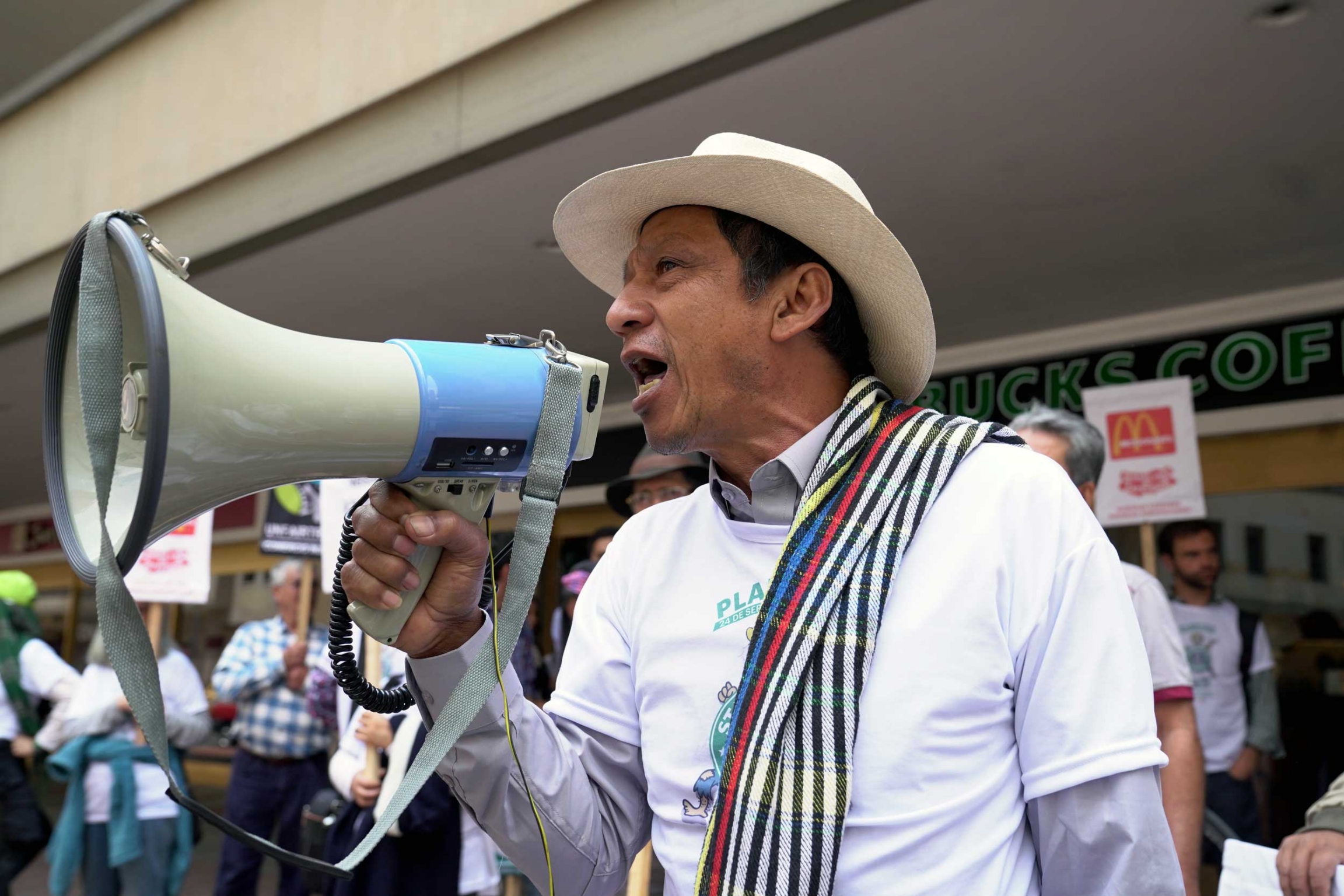 Henry Calvo, a coffee farmer, protests low coffee prices outside a Starbucks in Bogota, Colombia on Sept. 24. Calvo said that low prices paid to farmers for their beans have him living in poverty.

“Our relatives have had to buy clothes for us,” Calvo said, struggling to contain his tears as he talked about how his family has fought to survive as the price of coffee has fallen. “We have three hectares of coffee. But we don’t even have money to dress ourselves.”

"Our relatives have had to buy clothes for us."

Some farmers around the world are pushing for what may seem like a radical solution to the problem: They want coffee-exporting nations to create an international cartel that would set a target price for coffee and limit the supply of beans when prices drop below the desired range.

“It would be something similar to OPEC (the oil cartel),” said Oscar Gutierrez, the director of Agricultural Dignity, an advocacy group that is pressuring the Colombian government to negotiate higher prices for the country’s coffee farmers, and organized Tuesday’s protest outside the Bogota Starbucks.

Gutierrez explained that the price paid for a pound of Arabica coffee beans at the commodities exchange in New York has dropped from $2.40 in 2014 to $1 this year, mainly because of a spike in the production of Brazilian coffee.

What is a fair price?

This global price helps to determine how much growers are being paid. Growers who manage to produce high-grade specialty coffees can make two or three times as much.

Gutierrez said that at $1 per pound, most coffee growers in Colombia are just barely able to cover production costs and cannot invest in their farms or in the education of their children.

“We have reached a point where there is no other option but to regulate the market,” he said as a group of about 40 protesters chanted slogans outside the Bogota Starbucks. “This crisis has to show producers around the world that they need to create new relationships with coffee buyers.”

Colombian farmers are not the only ones complaining about the low prices for standard beans.

At the UN General Assembly this week, the Honduran President Juan Orlando Hernandez said that his country has lost $400 million over the past two years due to the current slump in coffee prices. The low prices, coupled with climate shocks, have forced thousands of farmworkers to leave for the United States. Honduras is the fifth-largest coffee exporter in the world. 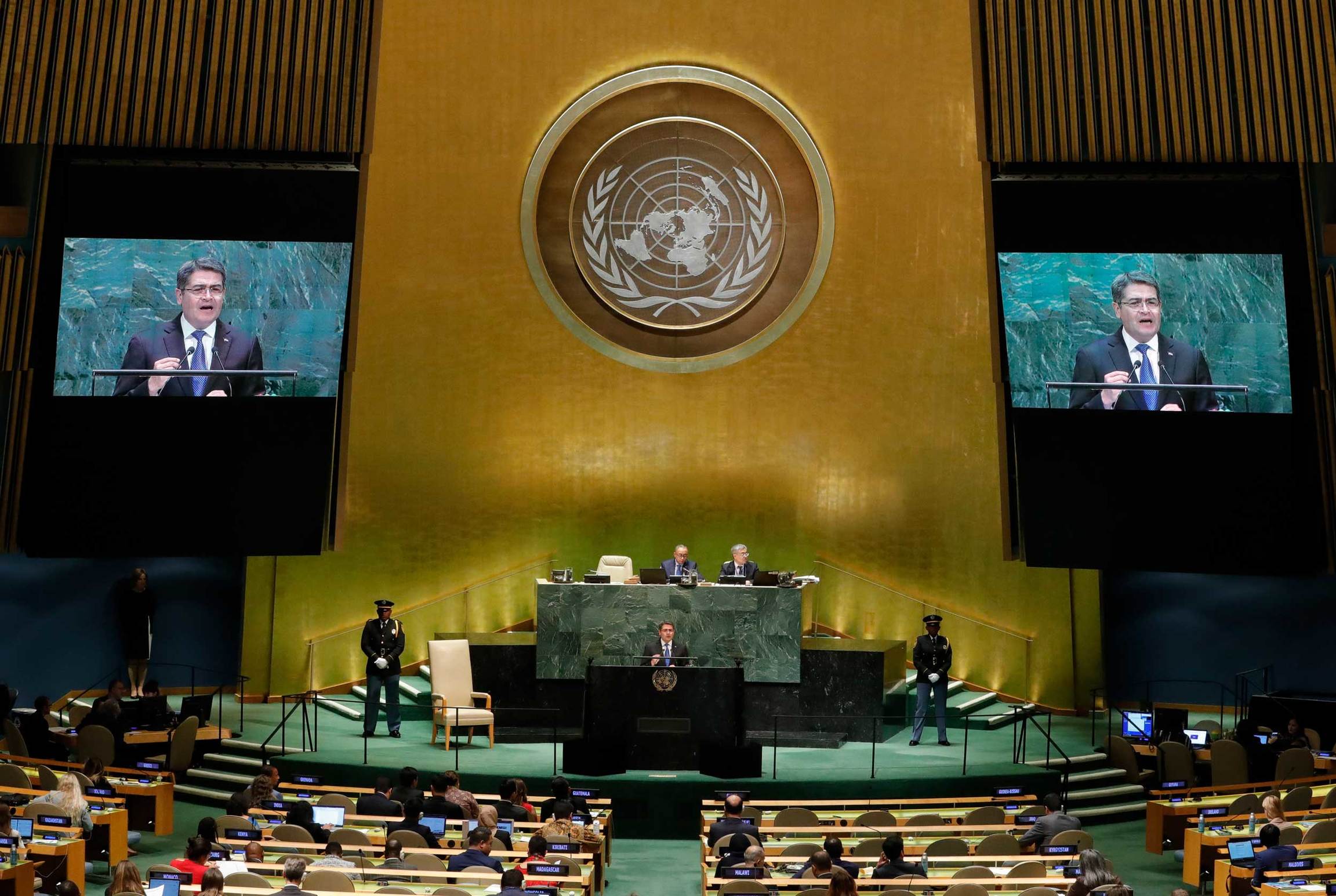 “Would you dare to ask a company that sold you a cup of coffee if they are paying producers a fair price for their product?” Hernandez asked the international delegates.

"Would you dare to ask a company that sold you a cup of coffee if they are paying producers a fair price for their product?"

Colombian President Iván Duque Márquez also addressed the issue at a meeting of coffee-producing nations that was held earlier on Wednesday at the United Nations, saying that more than 20 million small coffee farmers around the world are not getting their fair share of global coffee profits.

“The global coffee economy makes more than $200 billion each year,” Duque said. “But what small coffee growers make does not even account for 10% of what is made along that value chain.”

Can a cartel work?

But industry experts are skeptical that a cartel will solve this problem.

Kim Ionescu, of the Specialty Coffee Association, said that price controls have previously been attempted in the industry, generating mixed results.

Ionescu is the Chief Sustainability Officer at the SCA, and explains that before 1989, the world’s major coffee exporters operated under an agreement where they set production quotas for each country and withheld supply if global prices fell.

The system worked relatively well for countries like Colombia or Brazil, that had been growing coffee for a long time and were assigned large quotas, she explains. But it also prevented newer players like Vietnam from accessing coffee markets and exploiting their full coffee potential.

After the coffee quotas were lifted, Vietnam rose to become the world’s second-largest exporter and one of the countries with the highest yields. If coffee quotas were imposed again, Ionesco said up-and-coming producers like Myanmar or Rwanda might see their potential limited.

Related: The quest for coffee from a war zone

“Neither of these systems in an extreme sense works well,” Ionescu said, adding that there are always winners and losers. “Neither the tightly regulated market nor the free market seems to be working well for [all] farmers.”

Ionescu said that one possible solution to the current crisis is to price coffee in different parts of the world in a way that it enables producers to obtain a “living income.” Another solution is for the governments of producing nations to create price stabilization funds with the help of international organizations, that complement what the market pays for coffee and ensure farmers can sell their crop above local production costs.

Some of these solutions to the coffee crisis were discussed this week at a meeting in London organized by the International Coffee Organization and attended by several major coffee buyers, including Starbucks and Nestle. These companies said they were concerned over low prices, because they put the sustainability of the world coffee supply at risk.

The companies issued a declaration in which they promised to take concrete actions to improve the welfare of growers that included more investment in the development of coffee varieties that will resist climate change and promote a “living income” for coffee producers.

As these global debates on coffee take place, producers continue to struggle to get by, at least in countries like Colombia, where the current price of $1 per pound is hard to sustain. 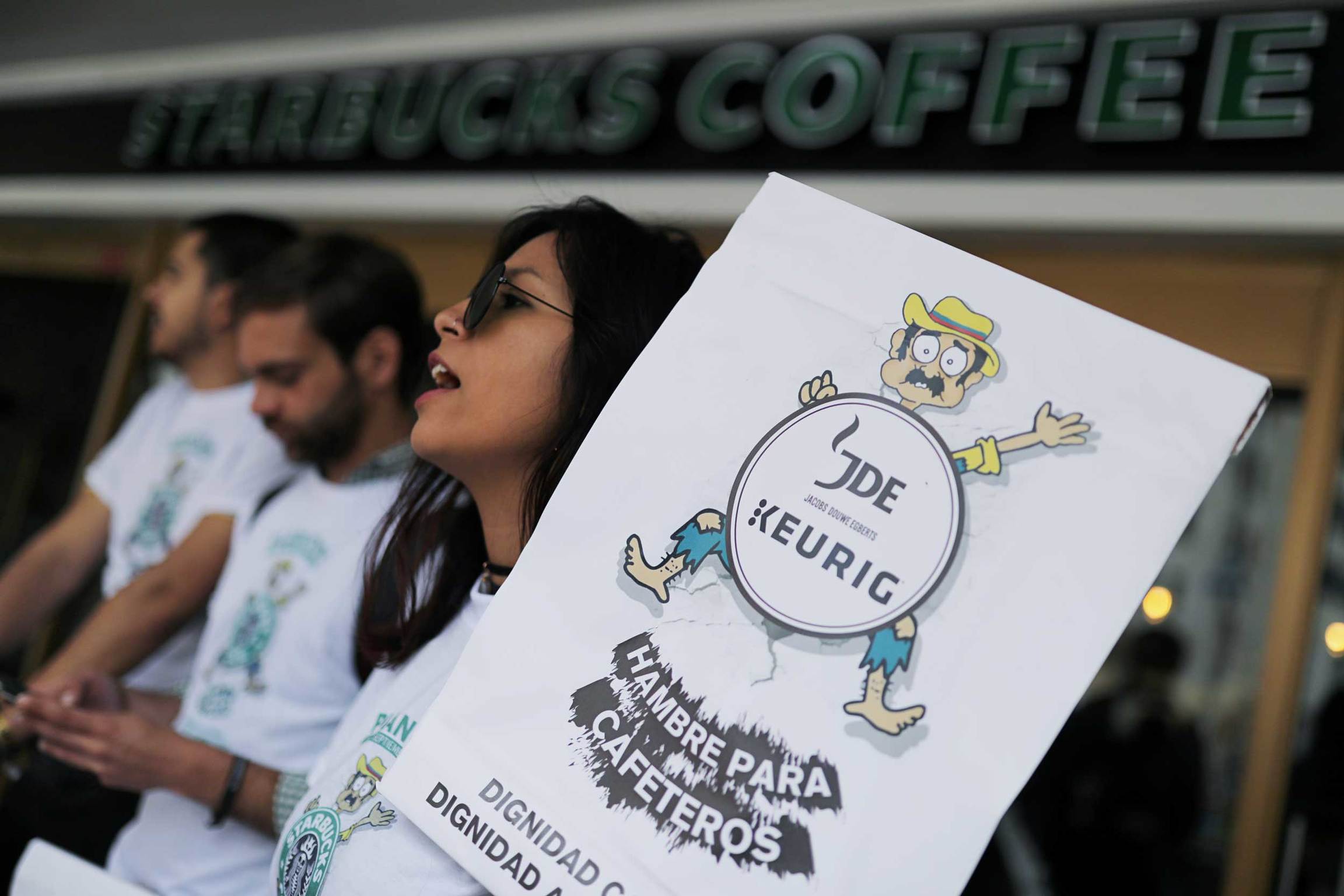 Coffee farmers rights activists protest in front of a Starbucks store in Bogota, Colombia, on Sept. 24. The sign reads "Hunger for coffee growers."

Ignacio Murcia, a grower from the Colombian province of Cundinamarca who attended Tuesday’s protest, said that he was paid the equivalent of $240 for his last 120 kg load of export quality coffee, or about $1.1 per pound.

He said the low prices over the last five years have forced him to downsize his coffee plantation from 23 hectares to 15 because when he sells beans for a dollar a pound, he can’t afford to pay for enough fertilizer or for laborers to take care of all of his coffee trees.

"They are killing the goose that lays the golden eggs. What will they sell when there are no more beans?”

His children have migrated to cities in Colombia because they don’t see a future in coffee.

But Murcia is sticking it out hoping that at some point, the different players in the coffee industry will take actions that improve the lives of farmers.

“They are killing the goose that lays the golden eggs,” Murcia said of coffee importers. “What will they sell when there are no more beans?”