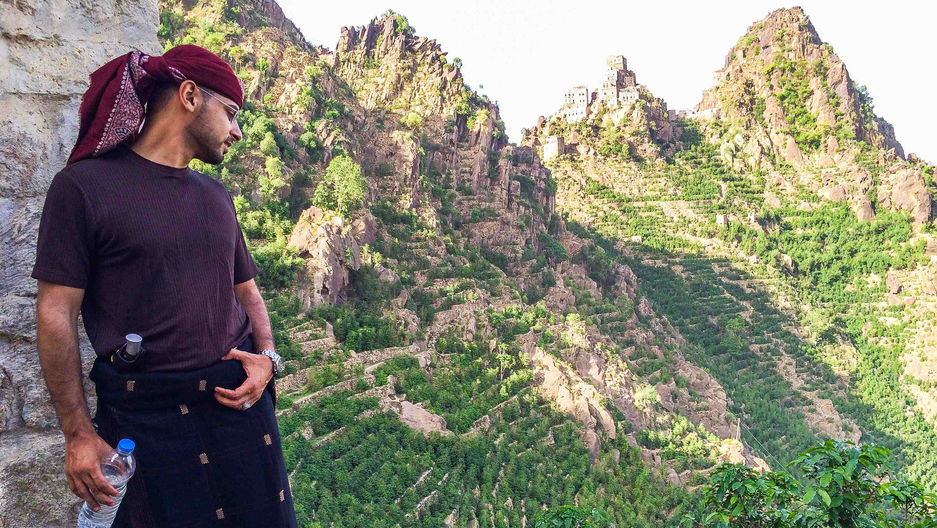 "The amount of effort it takes to produce this coffee in the middle of a war, to get these special bags that retain moisture shipped in ... to have generators on constantly — it’s so expensive," said Mokhtar Alkhanshali, who exports beans from Yemen, his parents' home country.

Courtesy of Port of Mokha

Five years ago, Mokhtar Alkhanshali was a student and a doorman in San Francisco at a luxury high-rise, when a friend told him about a bronze statue. It was just across the street from the lobby where he worked.

“I’d never seen it before and I had worked there for over a year,” Alkhanshali says. “I walked in and I see this statue, this beautiful Arab man, holding this cup of coffee into the sky.”

The nine-foot bronze statue was once the logo for the Hills Brothers Coffee company, which had offices in the plaza.

“It just sparked this interest in me and I just started researching more and I found all these ridiculous connections. Like, you know, Yemen being this amazing place [where] coffee was first brewed,” Alkhanshali says. His life story is now at the center of the new best-seller, “The Monk of Mokha" by Dave Eggers.

The statue also triggered memories of picking coffee cherries when he visited his relatives in Yemen while growing up in Brooklyn and then San Francisco’s Tenderloin district.

Next, Alhanshali tried seeking out Yemeni-sourced coffee in San Francisco and found none. “I realized it was a huge disconnect,” says Alkhanshali. “Nobody wanted to go to Yemen.”

That is not surprising. Often, when we hear about Yemen, it’s not good. It’s about war, drones — a massive humanitarian crisis. But Yemen also has one of the oldest histories when it comes to coffee.

Mokhtar started going himself, working with local farmers, studying new techniques and raising the quality of their beans. Then, on one trip in 2015, he was about to return to the US, carrying a suitcase of beans for a big coffee conference in Seattle.

“And a couple of days before I supposed to leave, the war began,” he says.

Houthi rebels on the ground fought Saudi-led missile strikes. The airports were bombed. Mokhtar was trapped.

“Finally, there were rumors of small ships coming through the Port of Mokha — this ancient port, where coffee was first shipped out of,” Alkhanshali says.

He got to the port, dodging firefights and a kidnapping, and made it to a tiny boat that crossed the Red Sea to safety. It was incredibly risky, but Alkhanshali made it to the Seattle conference with his suitcase filled with beans. (Click here to hear more about that harrowing journey. The World spoke with Alkhanshali just hours after he returned to San Francisco.)

Now, three years later, Alkhanshali is pushing ahead with his coffee business. The beans he brought to the Seattle conference were a hit. 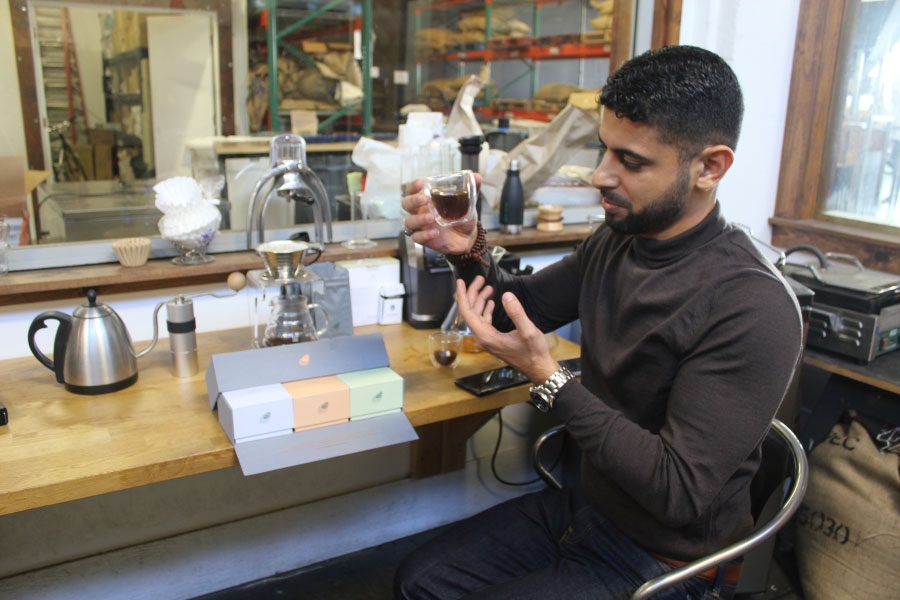 Mokhtar Alkhanshali, 29, hustles between Yemen and his offices, in a warehouse in Oakland.

“In these blind tastings, the coffees were the highest scoring on the table,” he says.

Indeed, they ranked among the world’s best. The coffee’s flavors — tropical fruits, spices — blew the judges away. It let Alkhanshali build his business — Port of Mokha — something he never imagined doing growing up.

“For a kid from the Tenderloin and Bed-Stuy, Brooklyn, living with seven siblings in a one bedroom apartment to think outside the box I’m put in, it’s unbelievable,” Alkhanshali explains.

Alkhanshali says that “box” refers to not being “afraid of not reaching my full potential.”

“As a kid, I loved reading. I had a little ghetto library in my mom’s pantry. One of my favorites was Harry Potter. And I think a lot of kids love that book because that idea of 'maybe I don’t belong in this world,'” Alkhanshali,  now 29, says.

Now, Alkhanshali hustles between Yemen and his offices in a warehouse in Oakland filled with stacks of burlap bags stuffed with coffee. The beans arrive there after 50- to 65-day journey across oceans and seas, moving from Yemen, Saudi Arabia, Singapore, Los Angeles and finally, to Oakland.

Alkhanshali also continues to travel to Yemen, navigating through a country continuously hit by a civil war and famine.

“When I go to Yemen, I have to go under the cover of night and be super surgical about what I do a very fast ... I don't tell anyone I go,” Alkhanshali says. He explains that although he has his "family, my tribe, to protect me," he chooses to “move around different nights, sleep in different homes.” 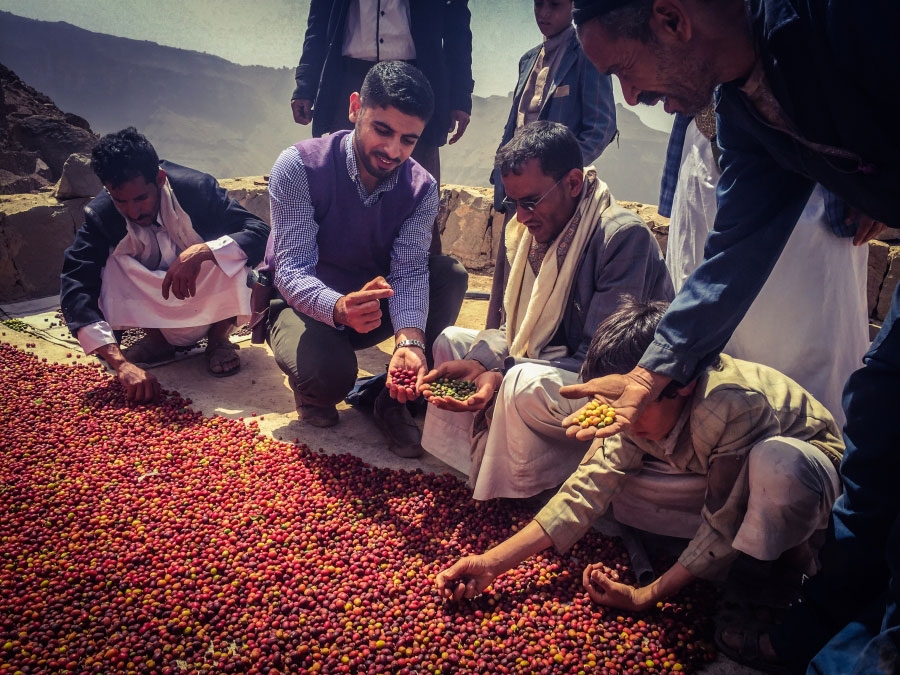 Alkhanshali with coffee farmers in Yemen.

Having roots in Yemen and a US passport helps. Alkhanshali says it's an advantage when traveling in Yemen because he blends in. “I can put my Yemeni hat on, our turban, and just fit in. No one can tell I’m American.”

But it is never easy, he says. And that's why Alkhanshali defends the price of his coffee — which sells for $16 a cup at some cafes. Ridiculous, some say, but Mokhtar pushes back and asks customers to think about it this way: People spend plenty on high-end wine, or cheese, or chocolate. Why should coffee be different? Especially when it’s exported from Yemen. 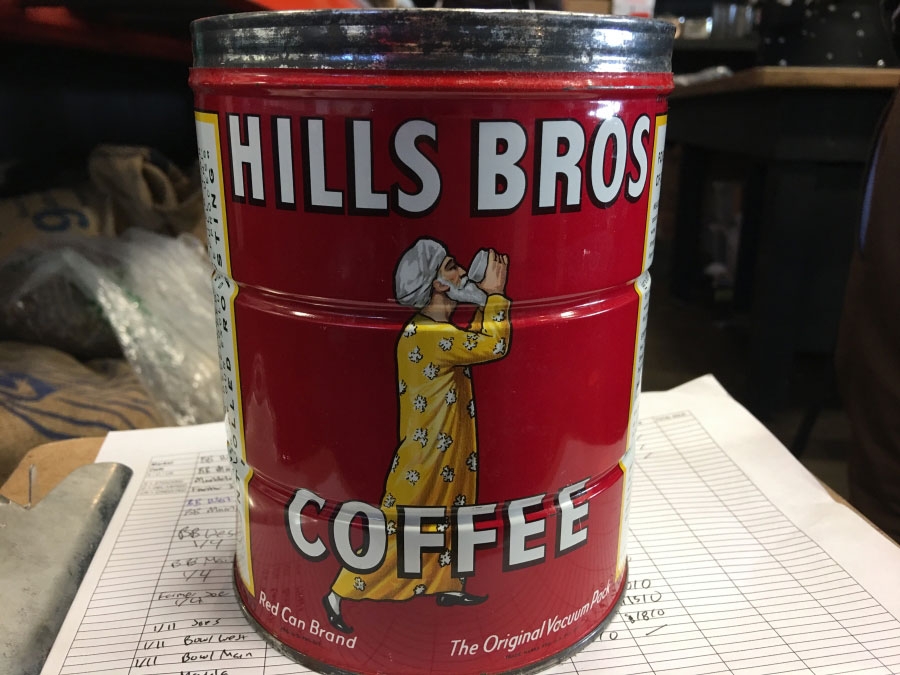 A Hills Brothers Coffee Company can sits in Alkhanshali's office. The company's logo used to feature a man holding up a cup of coffee. A statue of the man still stands in a San Francisco plaza, where the company once had its offices.

“It is is the worst humanitarian crisis in the world. Eighteen million people are food insecure. That's 70 percent the population. The amount of effort it takes to produce this coffee in the middle of a war, to get these special bags that retain moisture shipped in — we have no electricity so we have to have generators on constantly. It’s so expensive,” Alkhanshali explains.

Add port closures to that and it helps explain why Yemen has largely vanished from the world’s coffee map. Hopefully, says Alkhanshali, with peace one day, Yemen’s coffee exports will go up and costs will come down.

In the meantime, he is proud of what his coffee costs — mostly because it lets him pay what he thinks farmers in Yemen should earn for being so careful and precise about farming their coffee. In this case, Alkhanshali says he pays his farmers far above the market rate — $6 a kilo (2.2 pounds), up to $11 a kilo at some farms — that is 12 times what farmers next door in Ethiopia can get.

Alkhanshali says his farmers deserve it. They produce what those judges in Seattle ranked as some of the world’s best coffee, from one of the most troubled countries on earth.