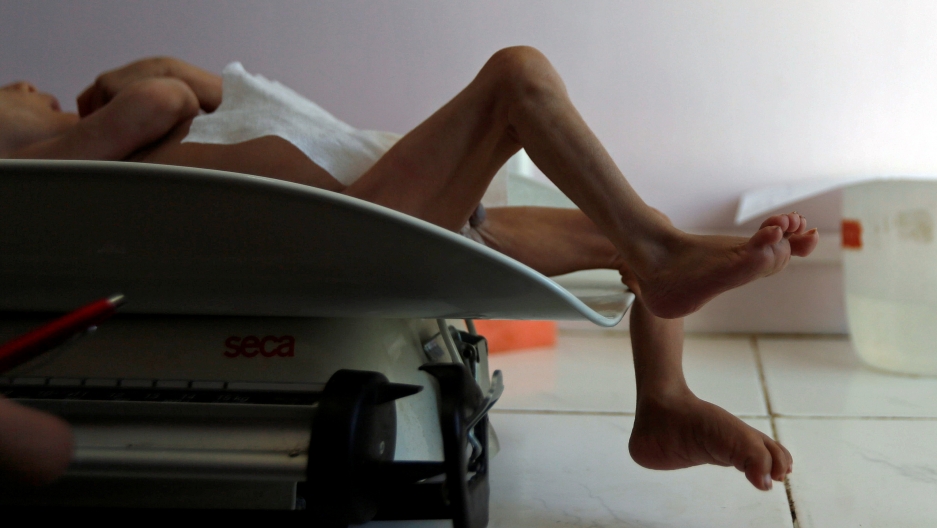 A boy lies on a weighing scale at a malnutrition treatment center in Sanaa, Yemen Nov. 22, 2017.

Yemen is still at war. As the UN brings warring parties together, the country remains in crisis.

Yemen produces little of its own food and fuel, so Yemenis rely on imports to survive. After four years of war, famine has taken hold in parts of the country.

The UN Secretary General has said that successful negotiations over a ceasefire in Hodeidah will give thousands of children and families a much-needed reprieve from the fighting. Hodeidah's port on the Red Sea is the main entryway for container ships, bulk shipments of food and fuel. At the completion of the first dialogue in Sweden between Yemen’s warring parties in December, Secretary-General António Guterres called it “a starting point for peace and for ending the humanitarian crisis in Yemen.”

In the meantime, 11 million children across Yemen still need humanitarian assistance to survive, including nearly 400,000 who suffer from the most severe form of acute malnutrition and are at imminent risk of death.

But how do we help them?

The World surveyed journalists, humanitarians and Yemeni citizens to come up with this short list of aid groups — some small and local, others huge and global — with proven track records of helping families in Yemen. Each in its own way is helping Yemenis survive what the United Nations has called the world’s largest humanitarian crisis. We first posted this list in 2017, and we continue to update it.

Humanitarians who live and work in Yemen

MonaRelief
Fatik al-Rodaini has been called a hero by Yemenis. He collects funds, buys food from local vendors, and creates batches of food (the term of art is "baskets") for families who his group has identified as needy. These days there is no shortage of need.

Yemen Hope and Relief
Ahmad Algohbary rescues children suffering from severe malnutrition. Families request his help, and he uses donated funds to transport and house them for weeks while their children are treated at nutrition clinics in major Yemeni cities.

Organizations whose mission is to help Yemenis

Yemen Aid
This group, founded by a Yemeni American, provides assistance and resources to Yemeni people, regardless of their race, political affiliation, ancestry or religion, in order to positively change, and ultimately save, lives.

Yemen Relief and Reconstruction Foundation
This charity, based in Washington State, provides help and support to Yemeni families in desperate need. Through a network of local volunteers, YRRF reaches out to needy families not only in urban areas, but also remote villages and refugee camps.

Global NGOs that include service in Yemen

ICRC
The International Committee of the Red Cross has a well-organized operation in country, efficiently delivering food, clean water and essential household items. This year alone, the ICRC reached 4 million people with basic aid. The group has been outspoken in its call for an end to hostilities, working with all sides of the conflict.

INTERSOS
Since the outbreak of the conflict in March 2015, this Rome-based organization has provided humanitarian aid to thousands of displaced persons and refugees fleeing ongoing clashes and bombings. Some of the work they've done has been to provide medical and food assistance, support and organize school and professional classes for children and teenagers, and provide psychological care and protection for the most vulnerable women and children and for the victims of abuse and violence.

Médecins Sans Frontières (Doctors Without Borders)
MSF has nearly 1,600 staff members across Yemen, including 82 staff members from abroad, working in 13 hospitals and supporting 18 more. MSF medical workers have shored up Yemen’s failed public health system and has been instrumental in combating the cholera epidemic that swept the country in 2017.

Norwegian Refugee Council
NRC responds to emergency needs in Yemen by providing communities with resources, services and information that enable self-reliance and preserve dignity. One distinguishing feature of NRC's aid program is that it sometimes distributes cash. In Yemen's economy, ruined by war, NRC has given Yemenis the ability to buy the basics.

Oxfam
This global organization delivers essential aid in the north and south of Yemen, and has reached 1.4 million people across the frontlines since July 2015. Oxfam provides clean water and sanitation services, including in hard-to-reach areas of the country, by trucking in drinking water, repairing water systems and building latrines. It supports families with cash payments to buy food in the local market or livestock, and cash for work programs, so they get a possible source of income.

UNICEF
The United Nations Children’s Fund, in collaboration with local authorities, non-governmental organizations and community partners, is working in all parts of Yemen to respond to the needs of children throughout the country, providing food, shelter, sanitation, education and health services to help children survive and grow to their full potential. Surveys by UNICEF are an important gauge of the seriousness of Yemen's humanitarian crisis.

World Food Program
The World Food Program (WFP) began providing food aid to Yemenis long before the current war. Its logo can be seen on sacks of flour in homes throughout the country. As conditions have worsened, WFP has stepped up its efforts, more than doubling the number of people it served in Yemen, from 3.5 million in January to over 7 million in October. In addition, WFP reports on travel conditions throughout Yemen, shares space on its planes and trucks, and has a history of helping other organizations respond to humanitarian needs in Yemen.

Advocacy groups that work to end the war in Yemen

Mwatana Organization for Human Rights
This group is headquartered in the Yemeni capital Sanaa. Mwatana programs defend and protect human rights. Its researchers conduct field investigations to detect and stop human rights violations. The organization also attempts to provide support and justice for victims, to hold accountable those in violation of human rights, and to help craft legislation and policies that prevent such violations.

Yemen Peace Project
The US-based advocacy group Yemen Peace Project is dedicated to supporting Yemeni individuals and organizations working to create positive change; advancing peaceful, constructive US policies toward Yemen; defending the rights of Yemenis in the diaspora; and increasing understanding of Yemen in the wider world.