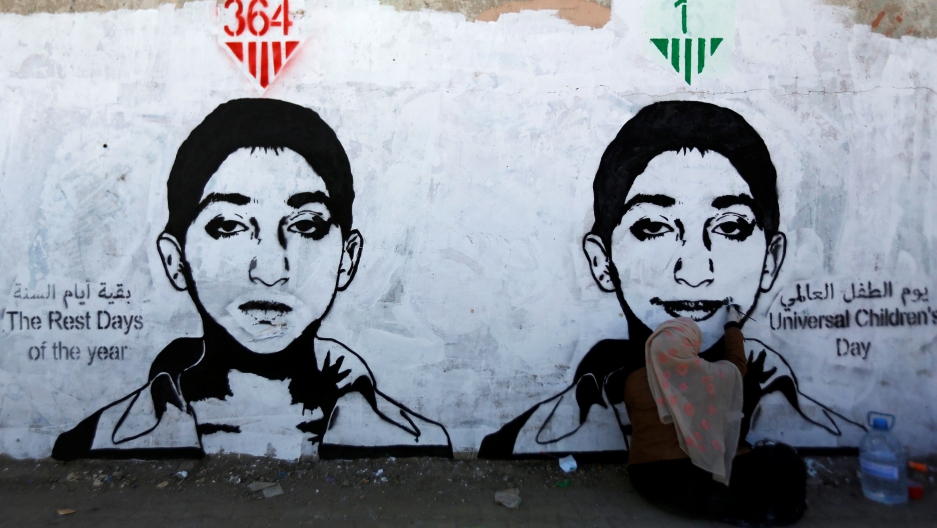 Artist Haifa Subay paints a mural about children's suffering in a time of war, part of the Silent Victims campaign in Sanaa, Yemen.

Yemeni culture has become increasingly divided by civil war. But it retains qualities that hold the promise of reconciliation, if only the war were to stop.

On March 26, 2015, a coalition of Arab countries led by Saudi Arabia, with support from the United States and Great Britain, began a bombing campaign in Yemen. It was meant to stop the rebel movement taking over the country.

One thousand days later — with 10,000 people dead from the fighting, close to a million infected with cholera, and 7 million at risk of acute famine — the war shows no sign of stopping.

"Everybody is just struggling really to get by these days," says reporter Iona Craig. The war has destroyed infrastructure and crippled the economy. The public sector, the country's largest employer, has essentially been shut down, with teachers, doctors and civil servants of all kinds going unpaid since fall 2016. "Even if they're going to work," says Craig, "they're not getting paid."

Daily bombing by the Saudi-led coalition in the rebel-controlled north is matched by protracted turf battles involving not only the Houthi rebels and pro-government forces but also local militias and fighters loyal to ISIS and al-Qaeda.

Craig, an independent journalist who lived in Yemen before the war, has reported from many parts of the country throughout the fighting. She says she's especially troubled by the way Yemenis have adapted psychologically to unrelenting war.

"It's almost become normalized, this kind of level of violence," she says. "And everybody is exhausted with it whether they're in the north or in the south."

"After 1,000 days of war, I feel scared of how I got used to it," says Suha al-Mujaheed, a humanitarian worker in Taiz, one of the front lines of the civil war. "I feel normal about sounds of explosions and the view of destruction. I sometimes forget that the rest of the world is living a different life."

Mujaheed, like many young Yemenis, saw her life interrupted in late 2014 when the Houthis, a religious militant group supported by military loyal to former President Ali Abdullah Saleh, began their assault on Taiz, Yemen's cultural capital. "Houthi war prevented me from completing my education normally," says Mujaheed. "I was finishing my third year of university when the war started, and because of the siege on Taiz city, I am still struggling to finish the last year."

In the coalition-controlled port city of Aden, southern activist Nadeem Salmeen says that food is available in shops, but inflation means Adenis are not able to buy much. Except for bread, which is subsidized by the government, a typical southern meal is out of reach. "For example," says Salmeen, "milk, meat and basmati rice are too costly even though they are our most important purchase in Aden."

Salma — we use a pseudonym for her safety — lives in the rebel-held Yemeni capital, Sanaa, in the north. She walks daily past government buildings and private homes destroyed by the war. Loss, she says, is a constant theme in conversations with friends and family. "The sense of fear of losing the loved ones," she says. And losing faith "in the international community to do something about us."

Another Sanaa resident, Fatik al-Rodaini, founded a humanitarian organization, Mona Relief, to deliver aid to Yemenis in need. He says it has been impossible for him, as a northerner, to work in southern Yemen. "There is no cooperation with local authorities," he says. "While there are many people suffering there, authorities in the south complicate our work there."

Craig says the divisions between north and south are real, but differences can melt away under the right circumstances.

"I've had southern friends meet with northern friends particularly when they've been helping me get across the country," she says. "I've sort of had this handover process where I go from the southerners who helped me to the northerners. But in a very Yemeni way, they will sit down and discuss politics for a couple of hours, and that's very indicative of Yemeni culture."

"And that's really why I think it's so important to try and remove the international and regional element of the Saudi-led coalition out of the conflict," she says, "because I think there's more prospect and more hope for Yemenis themselves to find a solution internally in Yemen when that international aspect is no longer involved."

Both the UK and the US are strong allies of Saudi Arabia, the United Arab Emirates and other members of the coalition that are fighting the Houthis in Yemen. They sell weapons, provide logistical support and fuel the jet aircraft that have bombed Yemen.

Craig, like many observers in and outside Yemen, believes the war is only prolonged by international involvement. She says the humanitarian crisis has been instigated by the Saudi-led coalition with the support of Western governments. "And I think," she adds, "that's the most important thing for people to understand — that we are all complicit in this."