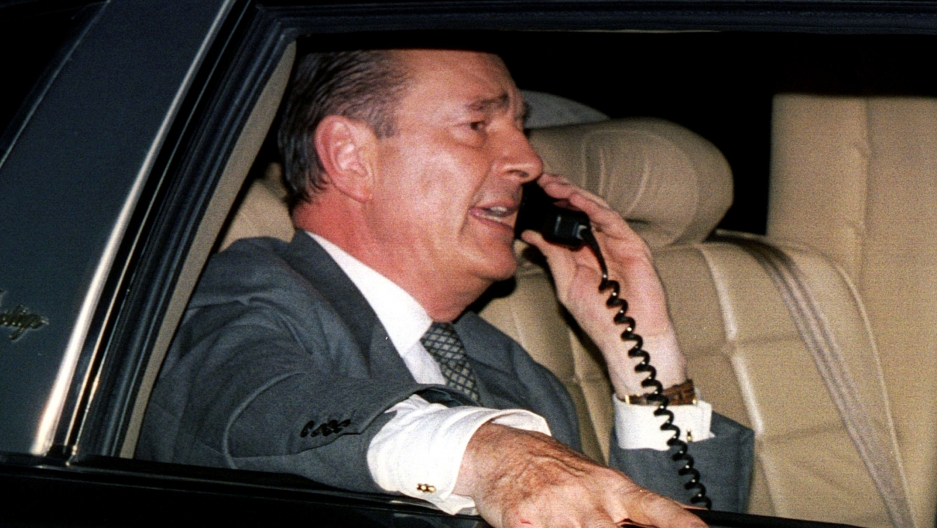 Newly elected French President Jacques Chirac talks on his car phone during a motorcade through Paris after he won 52% of the vote in the French Presidential elections, France, May 7, 1995.

Former President Jacques Chirac, a political chameleon who dominated French politics for decades and strived to make France's voice heard in Europe and beyond, died on Thursday at the age of 86.

Chirac was president from 1995 to 2007. He shaped his style in the mould of post-war leader Charles de Gaulle, seeking to strengthen France's status as a player on the world stage.

The National Assembly interrupted a sitting to hold a minute's silence. President Emmanuel Macron canceled a public engagement and scheduled a televised address later on Thursday.

Chirac passed away peacefully surrounded by his loved ones, his son-in-law Frederic Salat-Baroux told Reuters.

Mayor of Paris for 18 years and prime minister for presidents on the political left and right before entering the Elysee Palace himself, Chirac had a knack for connecting with voters, particularly in rural France.

"Jacques Chirac knew how to form a personal bond with the French people," said former socialist President Francois Hollande. "France was in his blood. He explored every corner, tasted every local delicacy."

In death, he will be remembered for his defiant opposition to the US-led invasion of Iraq, a military campaign which turned Chirac's relationship with then British Prime Minister Tony Blair into an acrimonious low.

Blair said he was deeply saddened by Chirac's passing.

"He was a towering figure in French and European politics over many decades. Whatever our differences from time to time, he was always unfailingly kind, generous and personally supportive," Blair said in a statement.

In Europe, Chirac became one of the bloc's main standard bearers. He forged an alliance with German Chancellor Gerhard Schroeder which brought Europe's two traditional powers closer together but upset some of their European Union partners.

He said of Eastern European countries that supported then-US President George W. Bush's coalition in Iraq that they had "missed a good opportunity to keep quiet."

Chancellor Angela Merkel called Chirac a "great partner and friend to us Germans." Jean-Claude Juncker, the outgoing leader of the European Union executive, said the continent had lost a man of strong convictions.

Five years after leaving office, Chirac was found guilty in December 2012 of abusing public funds as Paris mayor, making him the first head of state convicted since Nazi collaborator Marshal Philippe Petain in 1945.

But he served no jail time and the saga did little to tarnish his image.

Figures from French political life, including some who had locked horns with Chirac in the past, paid tribute to him on Thursday.

Far-right leader Marine Le Pen said despite political differences with Chirac "he was able to oppose the madness of the war in Iraq."

Related: French politicians have a long history of keeping their illnesses secret

Chirac was born in 1932 in Paris. He studied at the elite Sciences Po university and ENA civil service academy, and served as an army officer. By 1967, he had become a junior minister and was just 41 when he became prime minister in 1974.

He left the government and by 1977 was elected as Paris's first mayor, a job he would keep for 18 years, until his election as president in 1995. He won a second term in 2002, after a fraught battle with far-right challenger Jean-Marie Le Pen, father of Marine Le Pen.

During his career, Chirac had flirted with Communism and ultra-nationalism before settling on mainstream right-of-center politics, earning him the nickname "Chameleon Bonaparte."

Another of his nicknames was "Houdini," a reference to his knack for managing to escape serious punishment, despite the allegations of misuse of funds.

In the last years of his life, he suffered from neurological problems and was rarely seen in public. He lived quietly with his wife, Bernadette, in an apartment on Paris's Quai Voltaire, and worked on his memoirs.