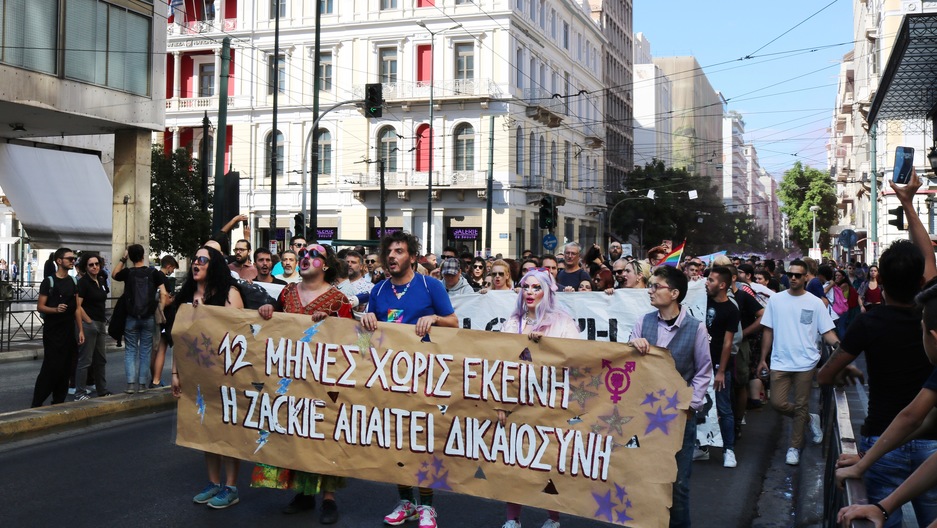 Marchers participate in the  Justice for Zak/Zackie protest near Omonia Square in Athens, Greece, on Sept. 21, 2019, a year after Zak Kostopoulos’ death.

At first, the crowd seemed too somber to join in the singalong of Madonna's “Like a Prayer” — a song that Zak Kostopoulos loved. But slowly, one by one, people gathered at the Athens School of Fine Arts began to sing and clap.

When they finished the song, mourners called out in unison, “Zackie lives, smash the Nazis.” In Greek, the phrase rhymes, and over the past year, it’s been chanted at protests, marches and drag shows all over the country.

The memorial last Friday was one of several tributes over the weekend to the prominent gay activist who was brutally beaten to death on Sept. 21, 2018. The violence was captured on camera and broadcast widely, and catapulted into the national conversation. In the past year, a larger movement has formed calling for justice for Kostopoulos, who was 33.

Kostopoulos was an advocate for people like himself — LGBTQ people, drug users and those with HIV, and he often wrote about the rights of sex workers and refugees. He made waves in 2013 when he wore a T-shirt to Athens' Pride that said, “HIV Positive.” But he was perhaps most famous as the drag queen, Zackie Oh, often sporting heavy black eyeliner and a rainbow-colored bob. As Zackie Oh, he once impersonated Freddie Mercury, wearing a bathrobe and carrying around a tricolor duster (and using it on audience members). In 2017, Zackie Oh closed out Athens’ Pride with an ebullient performance of "Disco Inferno."

Kostopoulos' death and the aftermath has been a struggle in Greece, where, in recent years, it had seemed LGBTQ rights were improving. In 2015, Greek parliament legalized civil partnership for all couples. It became possible to change one’s legal gender identity in 2017, and that year, Greek schools began anti-bullying “themed weeks” that focused on sexism and gender identity. In May 2018, a law passed making it possible for same-sex couples to foster children.

But at the same time, Greek organizations such as Athens Colour Youth reported that homophobic violence was increasing. The Greek Orthodox Church, immensely influential in Greek politics, continues to condemn homosexuality. And the Greek public remains prejudiced — according to Eurobarometer’s 2019 "Discrimination in the European Union" survey, only 64% of Greeks think that LGBTQ people should have the same rights as heterosexual people. (The European average is 76%.)

In the days after Kostopoulos’ killing, Greece’s Skai TV shared the results of a poll that found 1 in 3 Greeks don't want to have a gay neighbor. 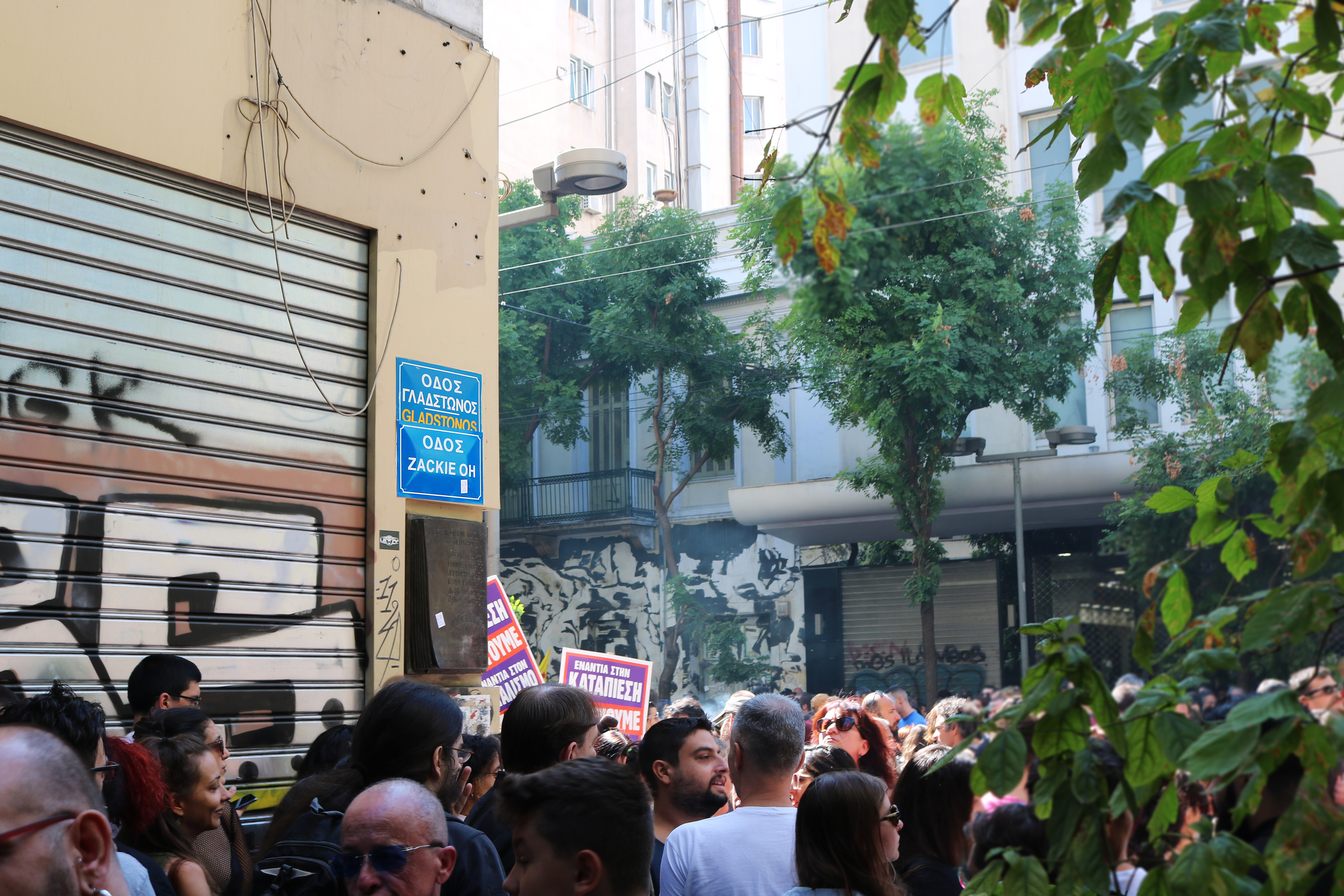 Protesters on Sept. 21, 2019, mounted a street sign onto the road where Zak Kostopoulos was killed a year ago, renaming it “Zackie Oh Road.”

“Nobody should see the things we saw on Sept. 21st. This was a murder in plain sight.”

“Nobody should see the things we saw on Sept. 21st,” said Panos Thanos, who grew up with Kostopoulos in the village of Itea. They both came out when they were around 16, and Thanos used to design costumes for Zackie Oh. “This was a murder in plain sight.”

Camera recordings of the attack on Kostopoulos show him trying to get out of a locked jewelry store through a broken window while two men repeatedly kick him — continuing to do so after he crawls out. In later footage, policemen are seen handcuffing Kostopoulos and continuing to kick him. Kostopoulos died in the ambulance on the way to the hospital.

Many Greek news reports stated that Kostopoulos was a thief and that he had died of a drug overdose. But an autopsy released last November showed that Kostopolous’ death was the direct result of his injuries, and he had not been intoxicated.

The jewelry store owner and a local real estate agent were charged with manslaughter. The two men maintain Kostopoulos had a knife and had attempted robbery, and that they reacted in defense of their property. 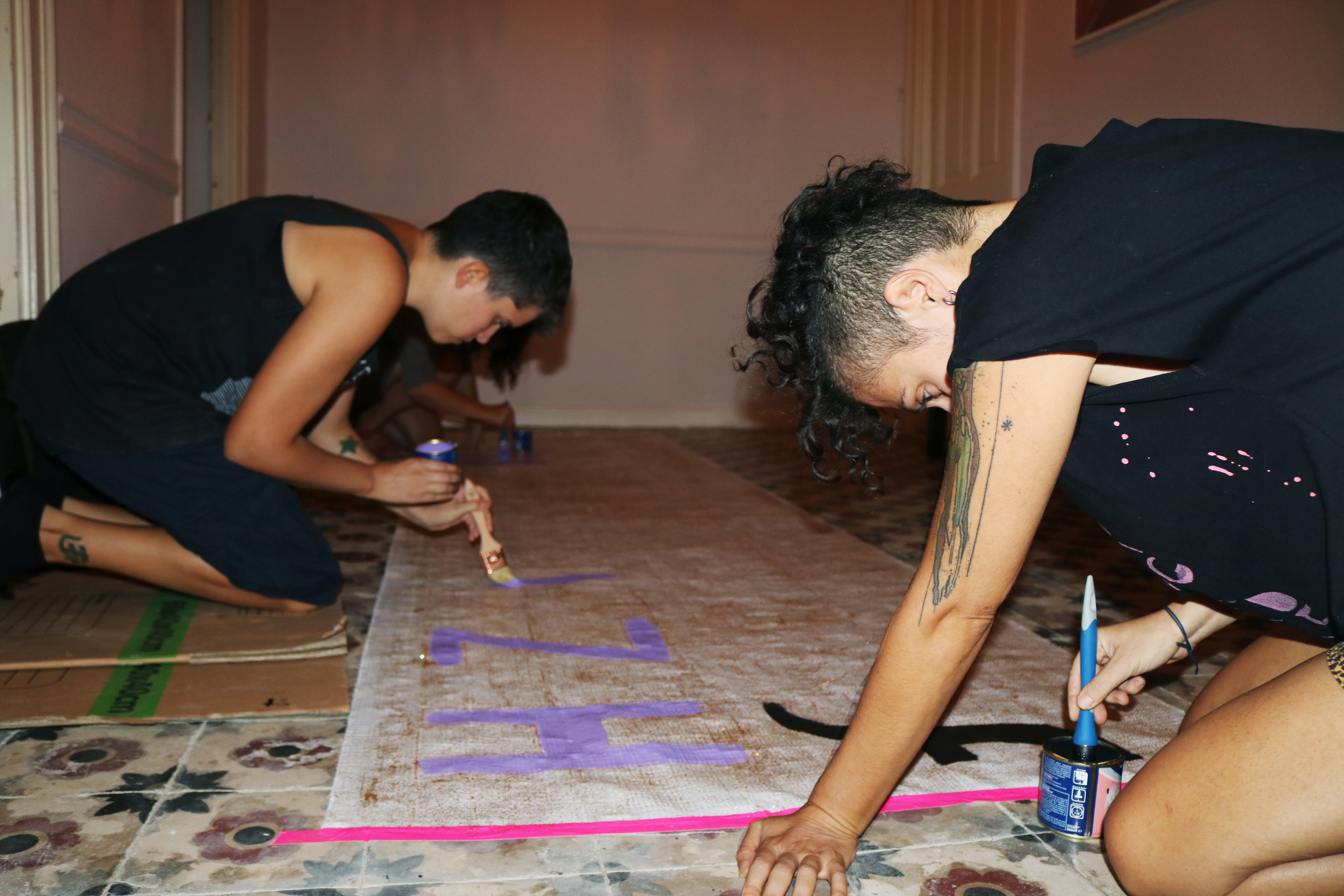 Members of Athens’ Feminist Autonomous Research Center created a banner in support of Justice for Zak/Zackie on Sept. 20, 2019. They say their work is inspired by Zak Kostopoulos.

The four police officers involved were also charged with manslaughter. The Hellenic Police declined to comment on the ongoing criminal case. They said they’re doing an internal disciplinary investigation that's planned to come to a close this month. Amnesty International has previously released reports that the Hellenic police have a "culture of abuse and impunity."

“If you saw a person in the situation that [Kostopoulos] was, you can easily conclude that if you continue to kick him in this way he will die.”

Kostopoulos’ family has asked for the prosecutor to raise all charges to murder, “If you saw a person in the situation that [Kostopoulos] was, you can easily conclude that if you continue to kick him in this way he will die,” said the family's lawyer, Anny Paparousou.

One year later, a trial date has not yet been set. Paparousou said this is abnormally slow. On Sept. 11 this year, she filed a request for the court to accelerate the process.

Paparousou said that the police had not collected enough evidence to determine if this was a hate crime, but that Greek courts treat LGBTQ people unfairly, “as persons that are out of the society.” 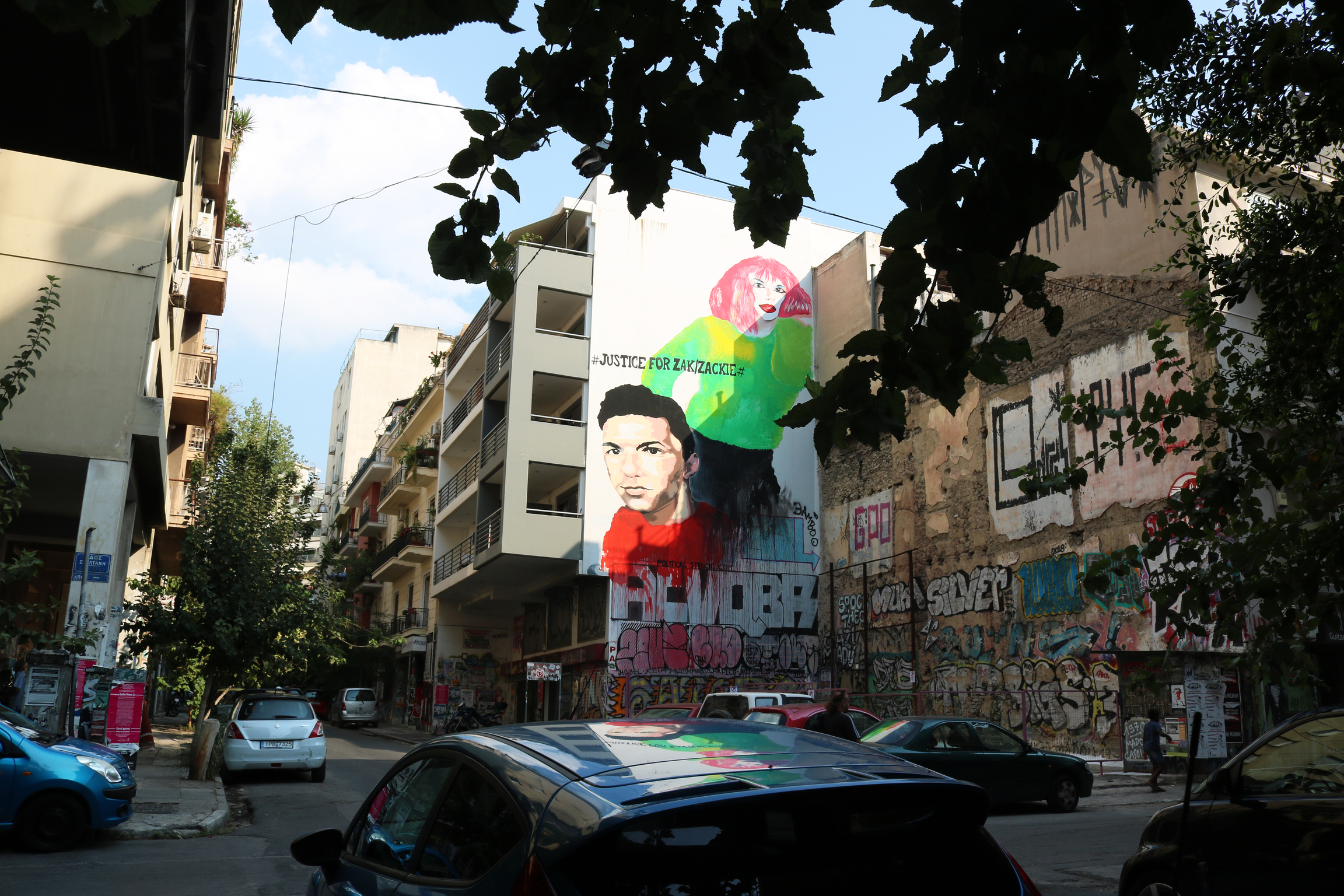 Graffiti of Zak Kostopoulos and his drag persona, Zackie Oh, is shown in downtown Athens, Greece, on Sept. 19, 2019.

At the recent memorial, George Kounanis, an LGBTQ activist and drag queen, said Kostopoulos’ killing was a wake-up call. “We all felt like it was an aha moment for all of us,” said Kounanis. “We treated our safety on the street as something for granted.”

“I feel like the Greek society has made leaps. But now it feels much more unsafe. For a while after the murder, I felt like I really couldn’t step out of my house.”

“I feel like the Greek society has made leaps. But now it feels much more unsafe,” said Kounanis, who realizing they still had glitter on their face from performing, rushed to wash it off before taking the bus home. (Kounanis goes by gender-neutral pronouns.) “For a while after the murder, I felt like I really couldn’t step out of my house.”

Related: These asylum-seekers won their refugee cases in Greece. Some wish they hadn't.

Stavroula Louzi heard this many times, working the door at the popular club, BeQueer, where Zackie Oh used to perform. “After Zackie’s death, there were too many teenage queer people that came to me, they were really terrified,” she said. She spoke to teens who were too afraid to wear makeup, or do drag, or come out to their families. “And I told them, ‘No, you should do that.’ I told them Zackie would be really proud of you, knowing you did that because of her.”

Louzi was a close friend of Kostopoulos, and loved to help him do his makeup or cook traditional Greek food for him. She was one of the people who began the #JusticeForZak/Zackie hashtag and Facebook page in the days after Kostopoulos died. “Many people sent us messages and were like ‘we want to help’ — anarchists, leftists, LGBTQI groups. And they decided to do demonstrations, some events,” Louzi said. “From day one, I had seen that this was really huge.”

In the last year, there have been art exhibitions, academic papers, two plays, a film, a book and dozens of drag show fundraisers in Kostopoulos’ honor. Amnesty International started an international campaign calling for Justice for Zak/Zackie. Protests were held in Irakleio, Chania, Thessaloniki, Rhodes and Corfu. Many cities held multiple events.

“The Justice for Zackie movement deserves to function on a national level, not only in Athens. For every Zackie out there, for every person that doesn’t fit to society’s standards.”

“The Justice for Zackie movement deserves to function on a national level, not only in Athens,” said Semina Pateraki, of the group Queer Corfu. “For every Zackie out there, for every person that doesn’t fit to society’s standards.” 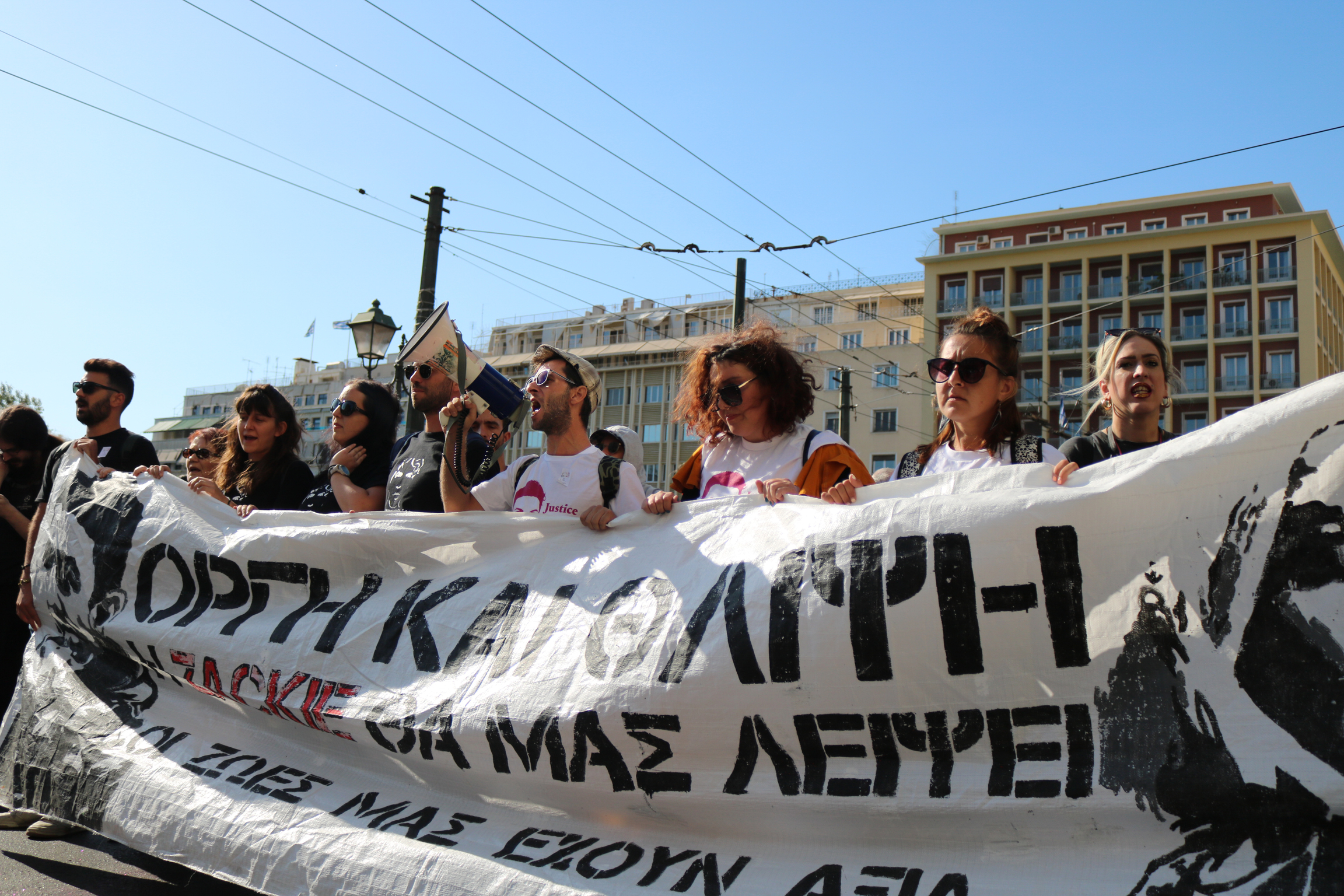 Panos Thanos leads chants at the Justice for Zak/Zackie protest in Athens, Greece, on Sept. 21, 2019, one year after Zak Kostopoulos was killed.

Athens' Pride this past summer included a commemoration of Kostopoulos’ life and activism, and featured photos of him on the poster. “I think his death brought the community together,” said Rafail Bilidas, member of Pride organizing committee. “Zak sort of became a symbol. I think what he’s given us is going to stay alive, and it’s going to define our politics and our action from now on.”

Dimitris Papanikolaou, a professor of modern Greek studies at the University of Oxford, calls this the “gift of Zak.” He explained that Kostopoulos’ killing was a horror that “does reframe the movement. It gives it one of its heroes.” He himself was so inspired by Kostopoulos’ legacy, he has begun a digital HIV/AIDS political archive to trace the history activism on it in Greece.

Thanos held a megaphone for most of the Sept. 21 demonstration that wound its way in and around the street where Kostopoulos was attacked to the front of the Greek parliament. He watched as protesters threw glitter on every street around parliament, and spray-painted images of Kostopoulos in and around the area. He led chants such as: “Gay, trans, lesbian/priestsesses of shame/we are proudly the shame of the nation.”

Previously not much of an activist, Thanos said he has found himself deeply involved in calling for “Justice for Zak/Zackie.”

“I am more of a fighter. I am really sorry that my best friend had to die to realize that. But I did realize that.”

“I am more of a fighter,” Thanos said. “I am really sorry that my best friend had to die to realize that. But I did realize that.”

He knows the court case will probably take years, and that legal justice is something Kostopoulos' family may never see. “But we are ready for those years,” he nodded. “And we will keep having protests, demonstrations, concerts, everything in his name.”