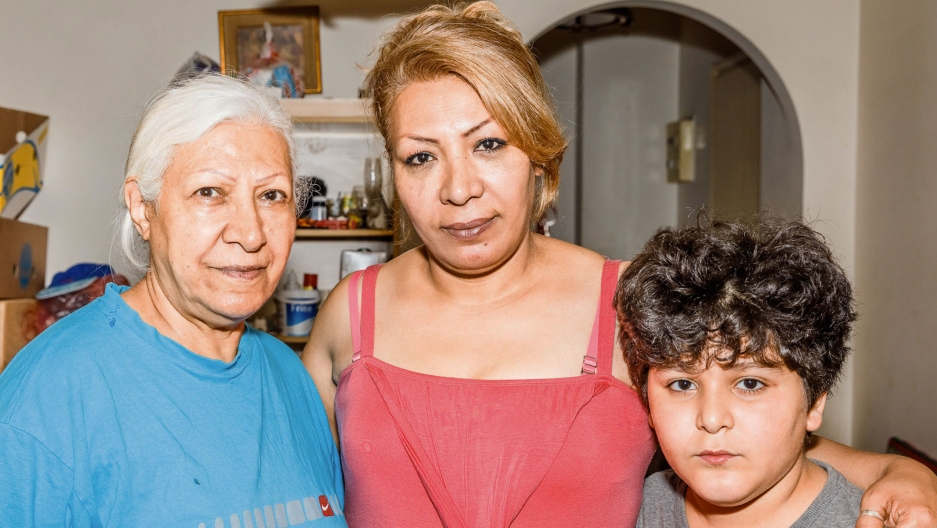 (Left to right) Fatemeh Khani Hakani, Khatereh Mohamadian and Amir Reza Zakizadeh. The family worries they may be out on the street when their apartment is taken back by the Greek government on June 30, 2019.

The boxes stacked in the corner of Khatereh Mohamadian’s central Athens apartment tell a story of trauma.

They contain all she has left from her journey fleeing her native Iran, where her life, and that of her children, was in danger. Like many asylum-seekers worldwide, she endured unspeakable hardships before finally landing in a tiny apartment in Athens, where she was successfully granted refugee status in 2017. She thought her problems were finally over and she could make a new life.

Yet here she is, packing boxes, wondering where she and her two young sons and elderly mother will go when she has to leave her apartment at the end of June.

“I have packed everything,” Mohamadian said.  “I’m just waiting for a miracle from God that maybe at the last minute he will do something.”

Mohamadian was given notice to vacate her apartment on June 30. That’s the date the Greek government will take back the apartment it gave her through a United Nations and European Union-funded program to support asylum-seekers. After Mohamadian won her case in 2017, when Greek asylum officials ruled that indeed her life would be in danger if she returned to Iran, she was allowed to stay in the apartment, even though the funding for it is specifically for those still in the asylum process.

“At this moment I wish I never got my approval as a refugee. ... If I was still an asylum-seeker, [that] would entitle me to have a cash card and … a place to stay, and with a little money I could get by until my kids grow up, but at this moment I have nothing.”

“At this moment I wish I never got my approval as a refugee,” Mohamadian said.  “If I was still an asylum-seeker, [that] would entitle me to have a cash card and … a place to stay, and with a little money I could get by until my kids grow up, but at this moment I have nothing.”

Her cash card and apartment are funded through a program called Estia designed to help asylum-seekers while they await their case to be heard for refugee status. But that support was supposed to end six months after she won her case. It’s a policy Greece has not enforced — until now. 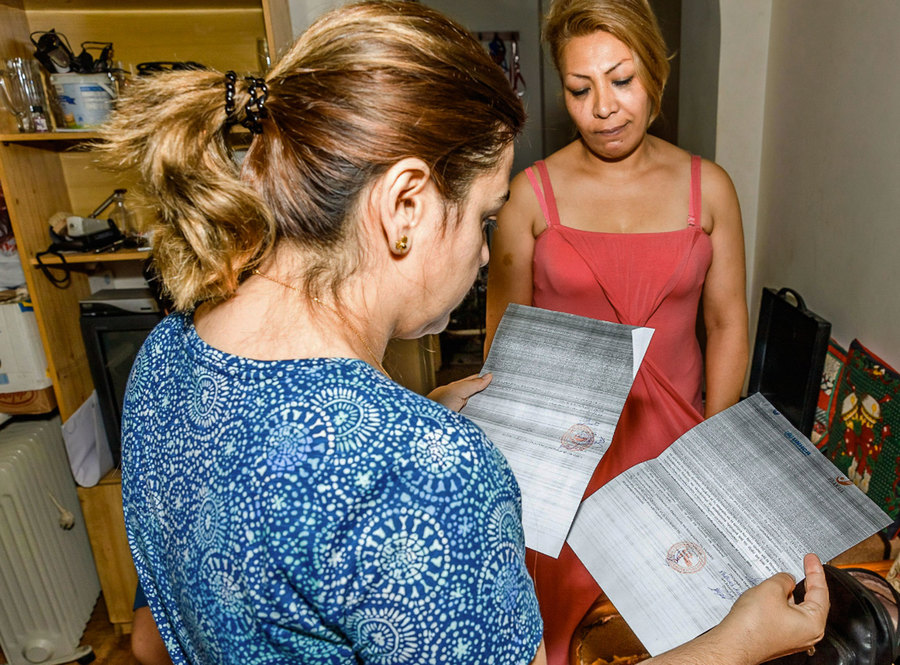 Khatereh Mohamadian shows her paperwork to refugee advocate, Sahar Kamrani. She asks Kamrani’s opinion as to whether there is anything she can do to extend her stay in the apartment.

Beginning this May, Greek authorities implemented a monthly cut-off date that ends financial and other support for some refugees whose cases were decided back in 2017.  It’s left many wishing they had not won their cases, said Sahar Kamrani, herself a refugee from Iran, who now runs an organization to help other refugees. Kamrani says she has heard this paradoxical wish from many who have won refugee status in Athens and are suddenly subjected to the policy.

The reality is that Greek authorities face many asylum-seekers in need of shelter and there’s a severe shortage of housing options.

With her deadline looming, Mohamadian paced her apartment anxiously. “I don’t know what to do, I really don’t know,” she said.

She has no job. For many of Greece’s asylum-seekers, speaking the language has been a challenge. The majority of asylum-seekers arrive from Iraq, Syria and Afghanistan, and these days the majority are women and children; families like Mohamadian’s. For many single mothers, finding childcare while they work has also been an obstacle. Luckily, Mohamadian has her mother to help out with the kids. 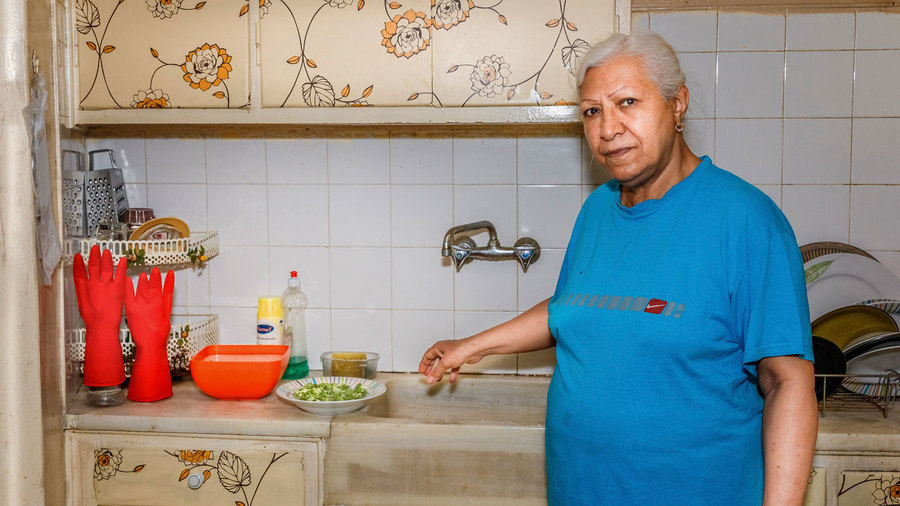 Mohamadian has spent countless days looking for her own apartment, and for a stable, decent paying job. But not speaking Greek, it’s been almost impossible.

“I found a job at an Iranian restaurant because I could do it without the language,” she said. “I don’t speak Greek.”

The owner was paying her under the table, the equivalent of about $1.15 an hour. She was working 12-hour shifts, seven days a week.

“But yesterday the owner of the restaurant was so rude and so aggressive toward me that I actually left the job,” Mohamadian said.

So, with a little over one week before her deadline of June 30, Mohamadian was beside herself — she had no income and would soon have no place to live.

“The reality for around … 80,000 people that are in the country today is that the majority don’t have access to a solution, they haven’t become self-reliant."

“The reality for around … 80,000 people that are in the country today is that the majority don’t have access to a solution, they haven’t become self-reliant,” said Boris Cheshirkov, United Nations High Commissioner for Refugees spokesperson in Athens.

Cheshirkov confirmed that support is ending for refugees who won their cases back in 2017 because they need to be self-sufficient.

“It’s also a matter of dependency,” Cheshirkov said. “The reception system is created for asylum-seekers.”

There just isn’t money to keep supporting refugees indefinitely once they win their cases, he said.

Cheshirkov knows how dire the situation is and how little support there is for refugees once they win status. But if they can’t make it on their own, he said, they can apply for public assistance, just like impoverished Greeks.

“They would then be benefitting from the [Greek] social welfare system, opening up valuable places for those who are in the horrific conditions of Samos.” Samos is a Greek island that houses thousands of asylum-seekers.

“There we have children as young as just a few days old living in garbage-infused small tents,” Cheshirkov said.

“Unless the government comes up with a proper plan with service provision, alternative accommodation and so on, we may be faced in the future with serious issues including homelessness [and] poverty.”

In other words, Mohammadian’s apartment needs to go to someone else. Yet, there has been no plan for those who will no longer receive cash aid and housing, said Dominika Spyratou, with Solidarity Now, a Greek nongovernmental organization that provides services to refugees. She wants her government to do more for those who have won their asylum cases.

“Unless the government comes up with a proper plan with service provision, alternative accommodation and so on, we may be faced in the future with serious issues including homelessness [and] poverty.”

Yet, Spyratou doesn’t only blame her government for the fact that families like Mohamadian’s may end up on the street. When the refugee crisis first began in 2015, many asylum-seekers were able to pass through Greece and on to other EU countries. But not anymore.

“Europe has closed its borders,” Spyratou said. Instead, the EU gives Greece money to support asylum-seekers. Yet, Greece is still struggling economically. There is high unemployment and the public education and medical systems are overburdened. It’s these same public systems that families like Mohamadian’s are now expected to lean on if they need help, and that has Greeks worried, Spyratou says.

“People are not against refugees and migrants,” she said. “What they’re really worried about is how are we going to live together in a country or a city where there are already so many problems — if we cannot find a job you will also not be able to find a job, there’s going to be more competition.”

It’s a worry that Mohammad Shafi Abid also has. He and his family share a tiny apartment with another family. His two-year-old child had serious heart issues when he was born and the family was living in a tent as asylum-seekers.

Shafi and his pregnant wife fled Afghanistan and won temporary asylum in Greece in 2018. Yet, today he is petrified that his young family will be the next to be asked to leave their home. He can’t rent anything without a job.

“I have been looking for a job about two years since I came here but still I didn’t get a job,” he said. He believes he has skills Greece can use: He speaks five languages. “I can be a translator because I speak Urdu, I speak Farsi, I speak Pashto, I speak English, but still I wasn’t able to get the job.” His mother tongue is Dari.

Shafi’s family is not being asked to vacate their apartment on June 30, but he is worried that his date will come up soon. He thought winning asylum would solve his problems.

“You have the hope that you will receive the decision from the government and then everything will be alright. But in Greece, it’s a different case. If you won, then another problem will start. They give you the answer, positive, and then they will stop supporting you."

“You have the hope that you will receive the decision from the government and then everything will be alright. But in Greece, it’s a different case. If you won, then another problem will start. They give you the answer, positive, and then they will stop supporting you,” he said.

A few days before Khatereh Mohamadian’s deadline to leave her apartment, she received a call to tell her she had been granted a few more months in her apartment — an eleventh-hour reprieve.

While she now has until Sept. 30 — a huge relief — worry instantly set in about how she would manage to change anything in a matter of three months. Being a single mother, not speaking Greek, having no savings to lean on, Mohamadian feels stuck. So she is not unpacking her boxes yet; the extra few months will be upon her quickly, and she doesn’t think she will get any more help.

Deepa Fernandes is a Pacific Oaks College reporting fellow, and her reporting was funded in part by First 5 LA.