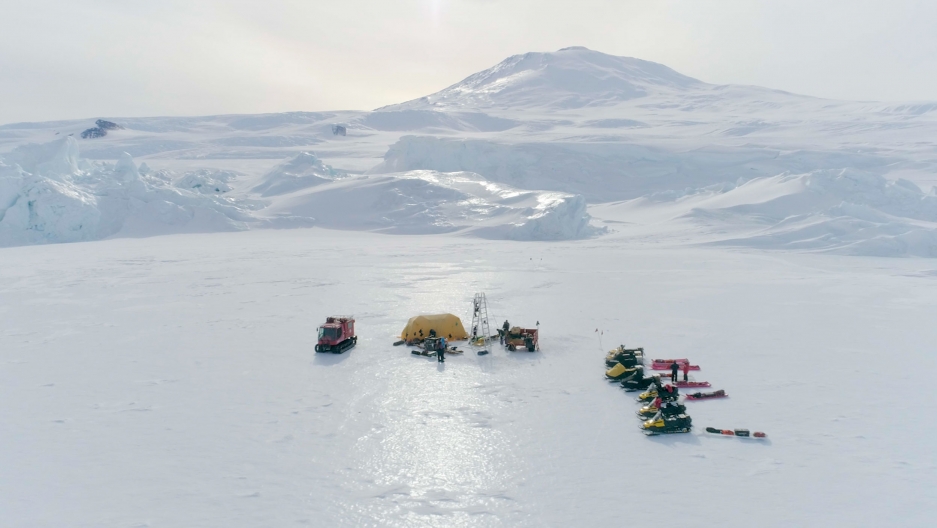 Britney Schmidt, an astrobiologist, sat in a small yellow tent, carefully studying the handful of monitors set up before her. They displayed a live-stream of telemetry data, sonar readings and a video feed from a robotic vehicle exploring the oceanic underbelly of Antarctica’s ice near the United States’ McMurdo Station.

The exploration is part of an effort to ultimately search for life in the alien ocean of Europa, one of Jupiter’s moons. The mission will also help us understand the physics of melting glaciers, and prepare for sea-level rise.

Europa has an ocean that covers the whole globe and is capped by a thick layer of ice. It is one of the spots humans are most likely to find life beyond Earth. The ice-covered ocean in Antarctica is an apt testing ground for technology we might one day send to Europa.

Schmidt and her Georgia Tech team launched the robotic vehicle, named Icefin, through a hole in the 12-foot-thick layer of ice covering the ocean below.

The video feed shows a wall of ice stretching down into the abyss. This is the underside of the Erebus Glacier Tongue, a glacier that flows off the nearby land, plows into the frozen ocean, and plunges 1,000 feet down into the water. Every once in a while, some of Antarctica’s wondrous marine life swims past. It's an otherworldly environment — and that is exactly the point.

“Europa is kind of the reason I get up in the morning... Because I’m interested in the question of, ‘is there life beyond Earth?’”

“Europa is kind of the reason I get up in the morning,” Schmidt said. “Because I’m interested in the question of, ‘is there life beyond Earth?’”

But Icefin itself will not go to Europa, and any robotic mission to the Jovian moon is probably decades away. While Icefin’s great-great-grandchild may become an interplanetary explorer, Icefin itself is tackling another, more immediate, scientific challenge: understanding melting glaciers.

Related: These scientists used small explosions to see under Antarctica and measure how fast a key glacier will melt

Glaciers around the world are disappearing at an unprecedented rate. According to a recent study, 335 billion tons of glacial ice is lost each year, amounting to about 0.04 inches of sea-level rise per year. Just in August, Iceland held a funeral for the first of its glaciers to be lost to global warming. Now, as the ocean warms, its role in melting glaciers from below is the subject of intense research.

Schmidt directs Icefin toward a critical juncture underneath the glacier: the grounding line. This is where the glacier lifts off the seabed and starts to float on the ocean. “That's the most dynamic part of the climate system,” Schmidt said. “As the ocean warms up, it's eroding that place. And then the grounding line moves back over time and that can make the whole thing unstable.”

But the grounding line is also deep below the ice, far out of reach of divers and boats. This robot, however, even if still wearing its space-explorer training wheels, is able to reach it.

Schmidt said that the Erebus Glacier Tongue is not at immediate risk of collapsing. And even if it were, it is a relatively small glacier that would not contribute much to sea-level rise. But it is a good training ground for Icefin to test its functionality before heading to a much bigger glacier. While EGT is in healthy condition, other Antarctic glaciers are in a much more precarious state.

This fall, Schmidt and Icefin will join an international effort to investigate the Thwaites Glacier. Thwaites is roughly the size of Florida and is at risk of catastrophic collapse. If that happens, it could trigger a sea-level rise of up to 11 feet, flooding coastal cities around the globe. Scientists don’t know when or how fast this glacier might collapse — and this is where Icefin can help.

Schmidt will deploy Icefin to map the underside of Thwaites Glacier at its grounding line. If successful, it will make three-dimensional maps of the environment and collect data about the water chemistry that will inform scientists about the delicate ice-ocean-land juncture. That, in turn, will help scientists understand how stable Thwaites is, and how fast it might disintegrate.

“We're motivated in the long run by getting this data that will send us into space,” Schmidt said. But, she added, meanwhile, “there's important climate problems and really just unknowns about the earth that we live on. And so, by thinking about it like a spacecraft problem, you’re actually able to see the earth in kind of a new way.”

You can find more reporting on Antarctica from Caitlin Saks' on NOVA.