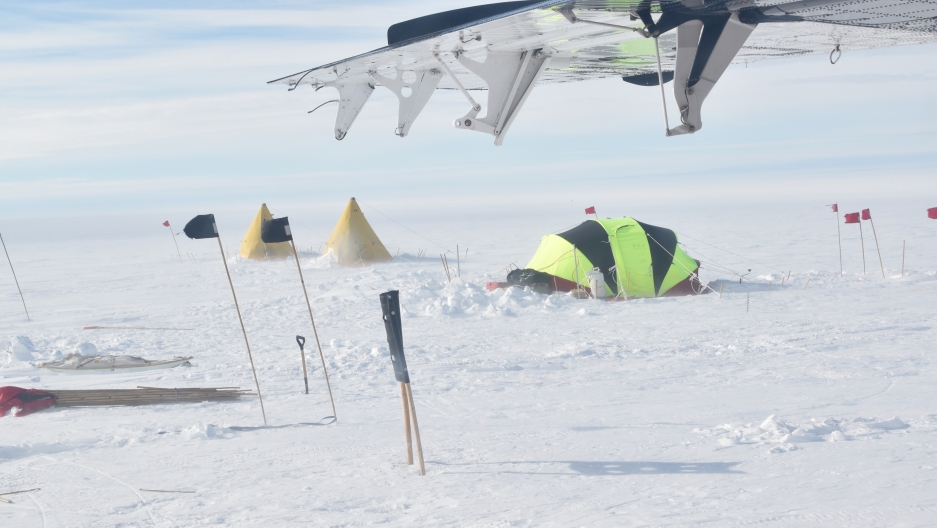 A science field camp at Thwaites Glacier, where a team of four slept in pyramid-shaped tents and cooked in a dome-shaped structure for 10 days during January 2019.

Sridhar Anandakrishnan and three colleagues watched from an expanse of ice as two prop planes flew off into the blue Antarctic sky on a peaceful day in January. After the planes faded from view, Anandakrishnan, a second scientist and two mountaineers became some of the most isolated humans on Earth.

The planes wouldn’t be back for 10 days.

“There you are, standing on a chunk of flat ice, the airplane is going away,” Anandakrishnan said after returning home from the ice. “That is a truly terrifying idea if you think about it too much … and so you don’t think about it a whole lot.”

Anandakrishnan and his team set up camp near the edge of West Antarctica’s ice sheet, on a rapidly melting glacier the size of Florida that scientists fear could trigger massive sea level rise. The nearest humans were some 300 miles away, and that was only a tiny field camp, population roughly 20. 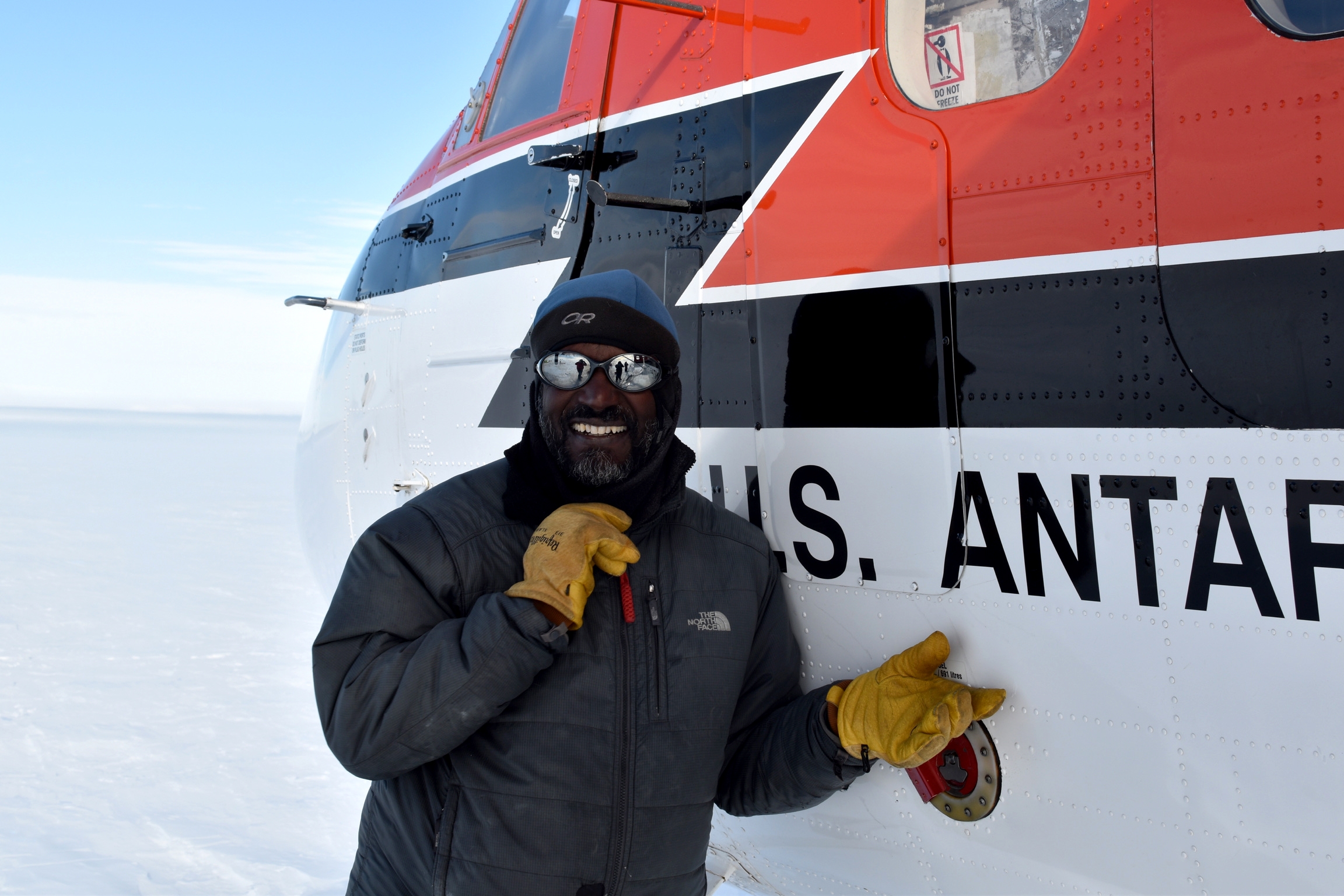 Sridhar Anandakrishnan, a glaciologist at Penn State University, near the Twin Otter plane that dropped him off on Thwaites Glacier.

Anandakrishnan, a Penn State glaciologist and veteran of Antarctic fieldwork, was leading a four-person advance team doing seismic testing this January near the grounding zone of Thwaites Glacier. The grounding zone is the last place where Thwaites is grounded, or sits on the seafloor, before it extends off the bedrock underneath Antarctica and starts to float on the Amundsen Sea.

This is where the glacier is being melted away from below by warming ocean water. Over the last four decades, Thwaites has sent more than 600 gigatons of ice out into the sea.

Their mission? To scout out locations to sink oceanographic sensors through the ice and measure the warm water melting it from below.

The floating portion, known as the ice shelf, was completely flat, save for a heavily crevassed ridgeline to the south of Anandakrishnan’s camp where the ice sat on top of an underwater peak. The ice sheet is stuck on that high point, and it’s stabilizing the glacier, acting like a brake on the flow of ice from the interior of the continent out into the sea. 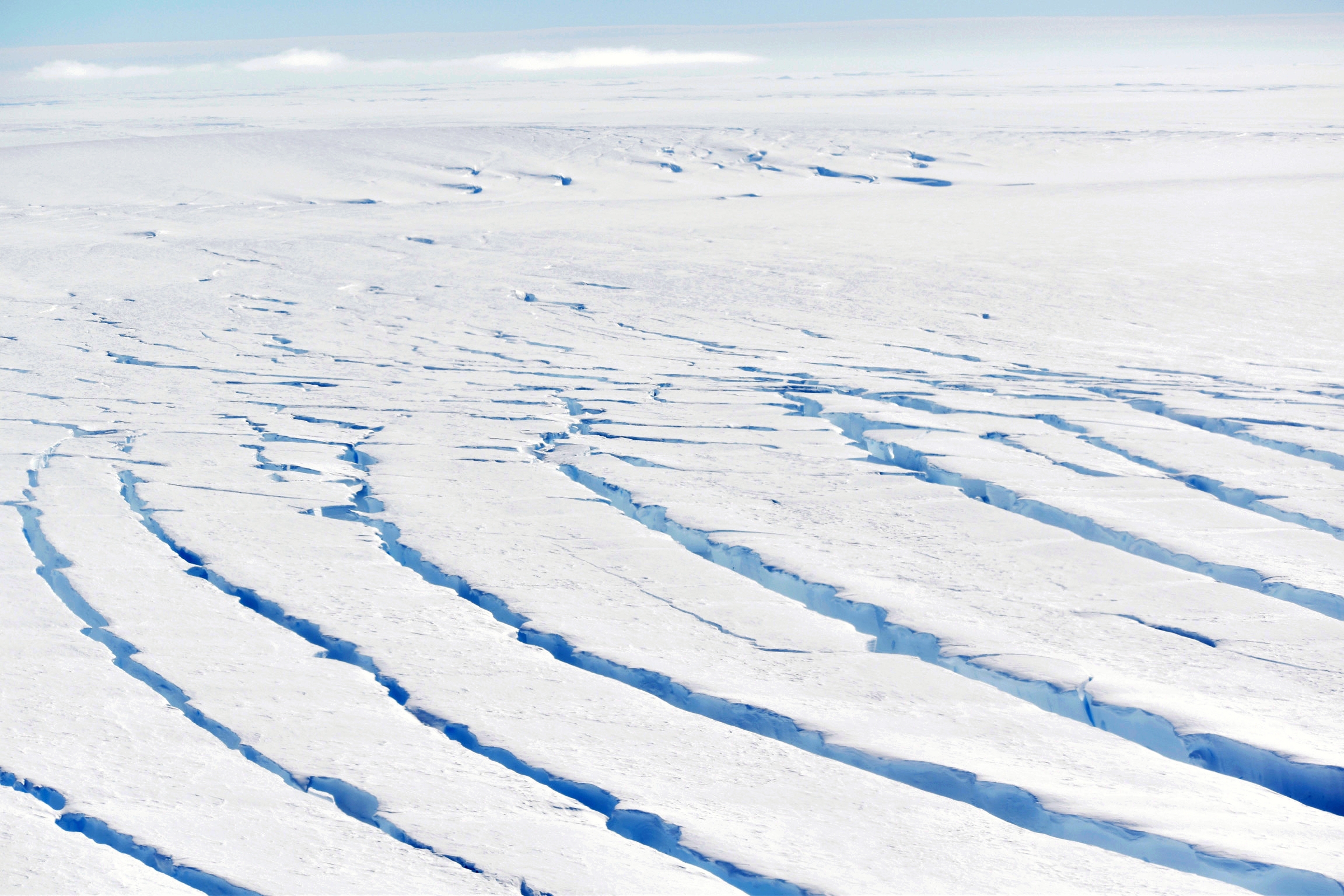 Crevasses at the grounding zone of Thwaites, where a ridge on the seafloor beneath the ice acts like a brake on the seaward flow of the glacier.

“The glacier is stable as long as the grounding line stays on that ridge,” he said. “If it were to step back from that ridge, then it would contribute enormously to sea level.”

Thwaites Glacier itself contains enough ice to raise sea levels by roughly two feet if it melts. But if it collapses, it would destabilize nearby glaciers and could trigger some 11 feet of global sea level rise.

The seafloor inland from the grounding zone ridge slopes downward again in what scientists call a retrograde slope. It’s as if Thwaites were sitting in a giant bowl. If the floating ice shelf where Anandakrishnan and his team camped were to disappear completely and the glacier retreated inland from that ridge, scientists fear there would be little to stop its complete collapse. 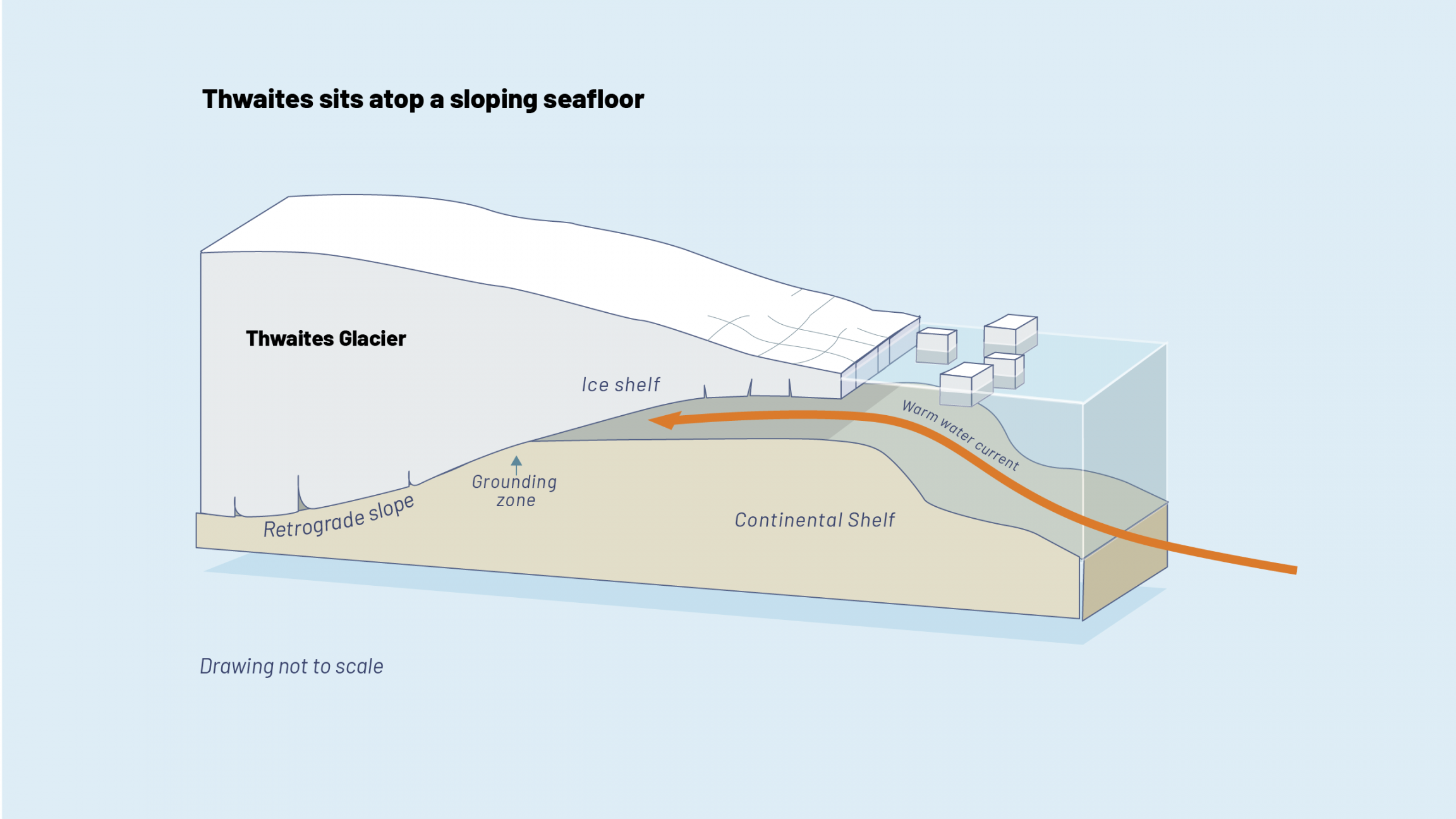 Anandakrishnan has been to Antarctica more than 20 times but still said being just a few miles  from a place so vital to the future of Thwaites was “remarkable.”

“As a glaciologist, you talk about the grounding line, you study it, you model it,” Anandakrishnan said, ”I had never in my life expected to see it so starkly right there, just visible to us.” 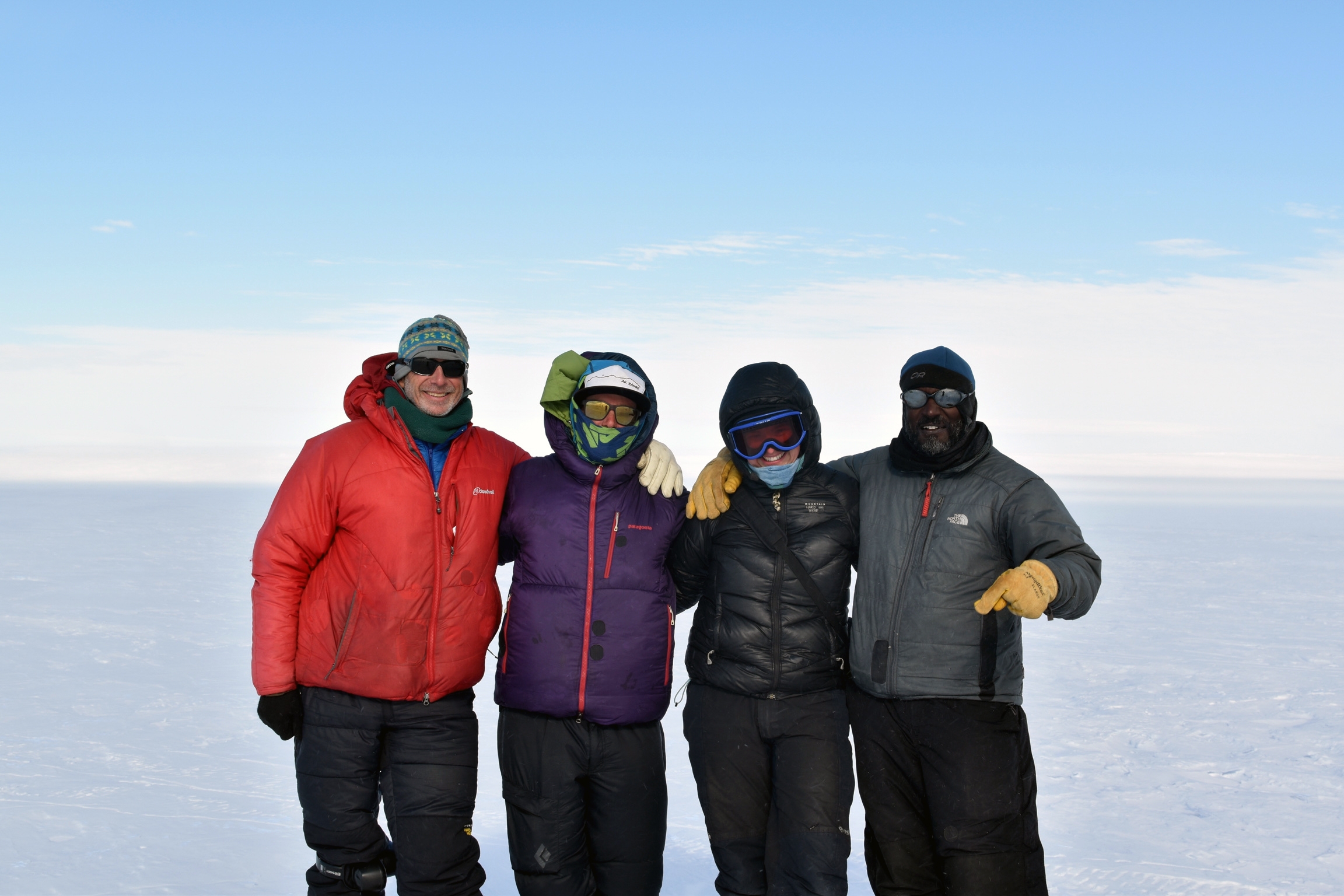 Mountaineers Mike Robers and Andy Bond and scientists Kiya Riverman and Sridhar Anandakrishnan spent 10 days near the grounding zone of Thwaites Glacier in January 2019. They were there to conduct seismic testing in advance of field research next year.

Measuring melting under 2,000 feet of ice

Anandakrishnan and the rest of his team, Kiya Riverman, a postdoctoral fellow at the University of Oregon, and mountaineers Mike Roberts and Andy Bond, were on the glacier for 10 days this January, scouting out locations for next year’s larger field season, when a research team will drill holes through the ice sheet with hot water and lower oceanographic sensors into the sea below.

These sensors will measure the water flowing underneath the floating portion of Thwaites to learn more about how it’s melting the glacier close to the grounding zone.

This season, the team set off a series of small explosions under the glacier’s surface to measure the thickness of the ice and depth of the water underneath it to pinpoint the best location for these sensors.

Anandakrishnan said this seismic profiling, where explosions are set off 10 feet under the surface of the glacier in an area where the ice is 2,000 feet thick, won’t weaken Thwaites or contribute to its collapse.

“It’s less than a pinprick for Thwaites Glacier,” Anandakrishnan said. 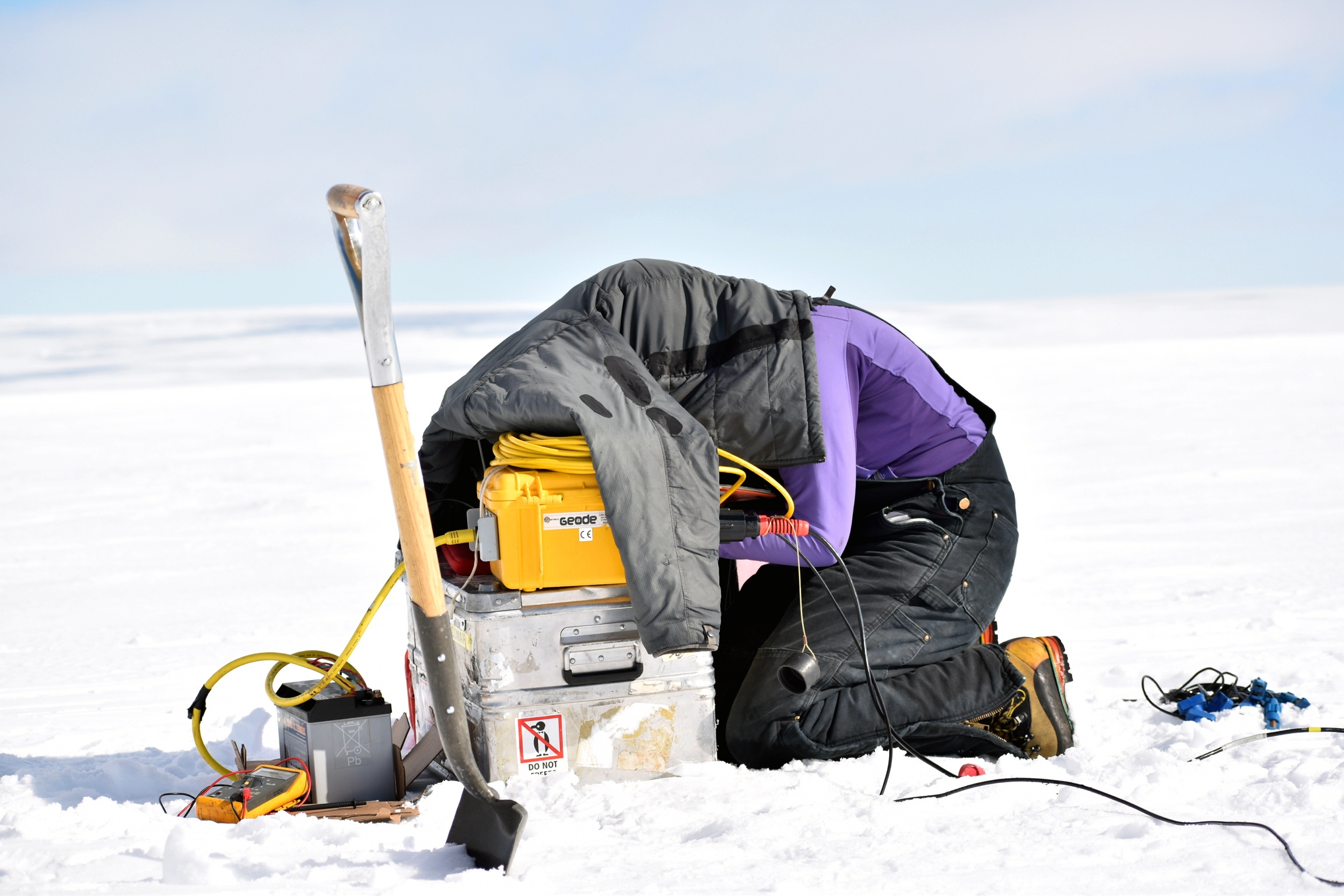 University of Oregon researcher Kiya Riverman looks at the computer that monitors seismic testing results on Thwaites Glacier. The coat over her head prevents glare from the harsh summer sun in West Antarctica from hitting the computer screen.

The science team camped in pyramid-shaped tents on the flat sheet of ice, and were forced to retreat into them at the end of their trip when a storm blew in. Gale-force winds and driving snow reduced visibility to next to nothing, and made traveling even to the nearby cook tent dangerous. The storm forced Anandakrishan and Riverman to hunker down in a tent for close to 24 hours straight.

“This really was the worst storm I’ve been in,” Anandakrishnan said.

Thwaites feels the full force of storms blown in by the sea because it is so close to the coast, Anandakrishnan said.

It was a far cry from the good weather the team had enjoyed at the beginning of their trip, with clear skies, no wind and balmy 10-degree temperatures. 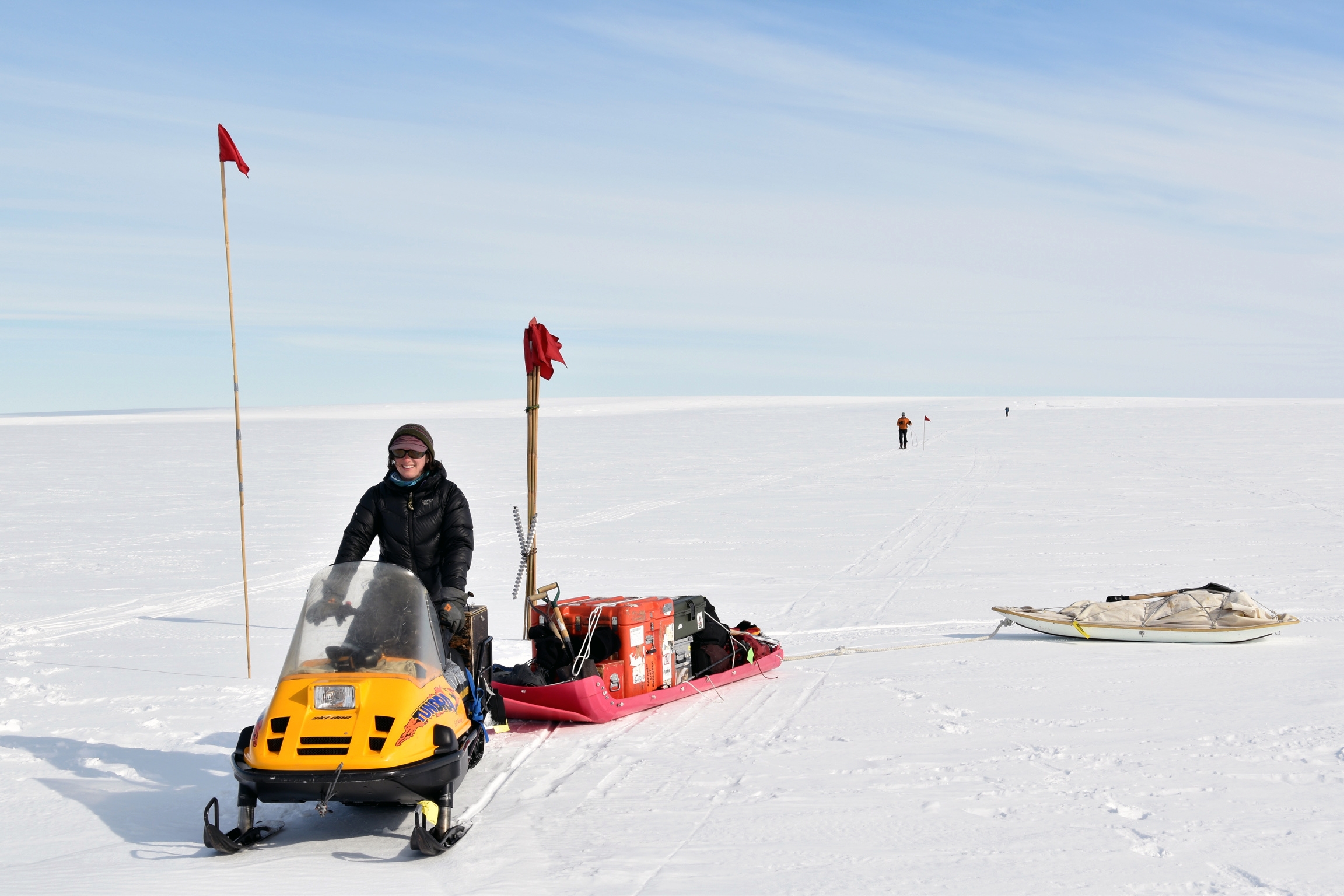 University of Oregon researcher Kiya Riverman hauls seismic equipment from one test site to the next. In the background, Mike Roberts hauls a seismic cable on skis.

Does Thwaites have an ‘alternate future’?

The research came during the first field season of a five-year international focus on the glacier, funded by British and US science agencies, which aims to better predict exactly how much Thwaites Glacier might contribute to sea level rise in coming decades.

Roughly a month after Anandakrishnan and his colleagues camped on Thwaites, teams of oceanographers and marine geophysicists sailed across the front of the glacier to study the warm water circulating there and look to the seafloor for clues of the glacier’s past retreat.

This season’s research on the ice was mostly in preparation for next year’s larger field season. But Anadakrishnan’s team did discover that the watery cavity underneath the glacier, at least in the spot on the glacier’s eastern side where they were working, is quite large. That means there’s likely plenty of space for the warm water that’s melting the glacier to circulate below and reach the ice.

Anandakrishnan hopes his team’s work and the findings of the larger five-year research collaboration does more than simply document the potential demise of the glacier.

By learning how much a melting Thwaites will contribute to global sea levels over the next century, Anandakrishnan hopes scientists will be able to pinpoint how much reducing carbon emissions would, in turn, reduce that sea level rise.

“Ultimately, what I’d like to be able to say is out of this process — we have a couple of alternate future timelines."

This is the fifth in a series of deep dives into the science and people of the Nathaniel B. Palmer’s 2019 voyage to Thwaites Glacier in West Antarctica. Listen Mondays on The World and check back online throughout June to learn what scientists found as they studied the sea that’s melting this Florida-sized piece of ice. Follow us on Instagram for videos, quizzes and more photos from Thwaites.