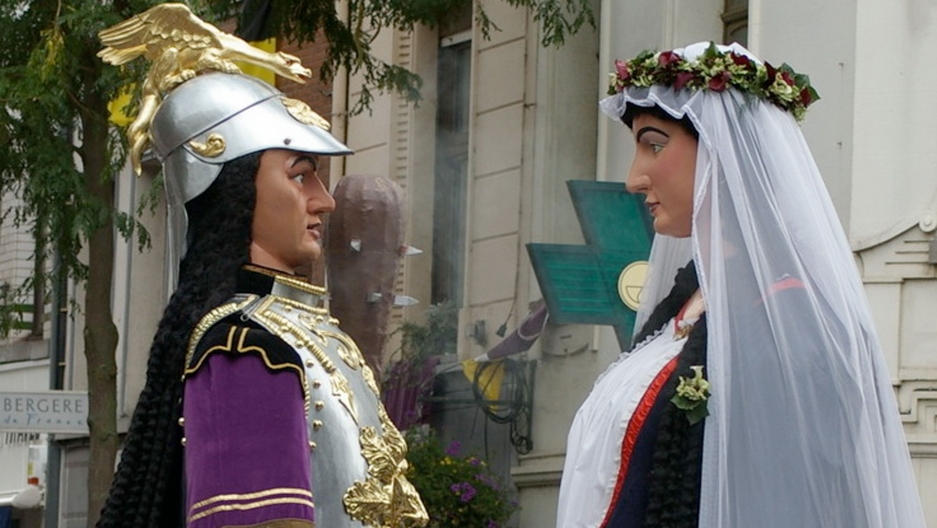 The Ducasse d'Ath, a traditional parade in the Belgian town of Ath, celebrates the biblical story of David's triumph over Goliath.

The Ducasse d'Ath begins Friday. It's a centuries-old festival featuring large puppets, giants and floats that parade through the streets of Ath, a village of 30,000 in the French-speaking region of Wallonia in Belgium. The exact purpose of the celebration has changed over time, but it celebrates the biblical story about David's triumph over Goliath.

It also includes a character named Le Sauvage, or "the savage." He is portrayed by a man wearing blackface, a nose ring, a headdress and chains. It's a tradition that dates back to 1873, and today, is a display of 19th-century "exoticism," according to the town’s website.

But this year, an anti-racist group is asking the United Nations to remove Ath's festival from the UNESCO cultural heritage list unless Le Sauvage stops.

People in Belgium have dressed up in blackface at festivals for decades, but in recent years, a push to end the practice is gaining steam in a series of controversies that underscore Belgium’s resistance to discussing the human rights abuses of its colonial past.

Ath's Le Sauvage is the most recent one.

The anti-racist activist group, Brussels Panthers, after successfully petitioning the Belgian city of Lessines last year to end its own annual blackface parade, petitioned the UN.

Mouhad Reghif, spokesman of the Brussels Panthers, said the whole tradition of the character needs to go.

“The message sent by this character is black people are not human. They are less than human.”

“The message sent by this character is black people are not human," Reghif said. "They are less than human.”

The controversy follows a series of similar incidents: In 2015, Belgian foreign minister Didier Reynders had his face painted black during a festival in Brussel, provoking an international outcry. In May, partygoers dressed in blackface and “African garb” at an event hosted by Brussels’ Africa Museum.

And every December, Belgian children celebrate Zwarte Piet, or Black Pete, a servant of Sinterklaas, a local precursor to Santa Claus, that leaves presents and toys at their parents’ fireplaces on Dec. 6 as part of an annual tradition.

Laurent Dubuisson, a historian who runs Ath’s folklore museum, told The World he was surprised by the controversy and, while acknowledging that the character might provoke shock, said Le Sauvage is considered a star of the parade. Dubuisson said that the outcry might serve "as an opportunity to educate and explain our history," adding that it’s "very probable" that the character would evolve and adapt to suit contemporary sensibilities.

But, he added, such changes would need to take place at “our own pace” — sometime "in the next 20 years.”

Activists say they can’t afford to wait that long.

Laura Nsengiyumva, an artist and activist based in Brussels, said that parades like Ath's jeopardize the future of an entire generation growing up in Brussels, where unemployment rates of youth of immigrant descent are among the highest in the European Union.

“We have one of the most diverse cities in the world,” she said. “Why would we waste an entire generation when we can make them feel like they’re a valid citizen of this country? We just don't have the time.”

“We have one of the most diverse cities in the world,” she said. “Why would we waste an entire generation when we can make them feel like they’re a valid citizen of this country? We just don't have the time.”

The Brussels Panthers said in a statement they’re convinced they will eventually put an end to the racist tradition of blackface in Belgium — and everywhere else — “if we get to work to build convergences at [the] European and global level.”

Nsengiyumva, bolstered by the recent success of her project in Brussels — which melted an ice sculpture of King Leopold on his horse, symbolizing the slow dissipation of colonial-era attitudes — says the movement is gaining momentum.

“I have good hope that it's coming, and I think what's happening at the festival in Ath is a symptom of that.”