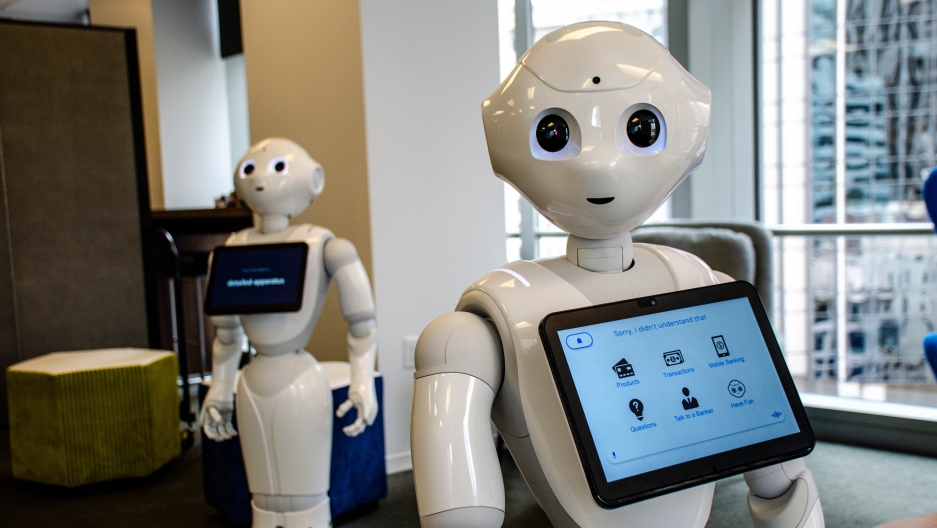 About 15,000 robots named “Pepper” are used in Japanese and European banks, fast service restaurants, and healthcare settings. Pepper is now in US bank branches, too. HSBC has them in select locations to help answer basic customer questions and skip the line for the teller.

Democratic presidential candidate Andrew Yang is sounding the alarm: The robots are coming for your job.

“Technology is now automating away millions of American jobs. It’s why Donald Trump is our president today,” Yang said at the first Democratic primary debate in June. “We automated away 4 million manufacturing jobs in Michigan, Ohio, Pennsylvania and Wisconsin. And we’re about to do the same thing to millions of retail jobs, call center jobs, fast food jobs, truck driving jobs.”

Scary words. But to others, robots represent something else — freedom from drudgery.

In Japan, robots aren’t scary. In fact, interacting with a robot has become routine.

“They're everywhere you turn, in the subway, in stores, in the hotels,” says Kass Dawson with Softbank Robotics, a Japanese-owned company that designs robots in France and constructs them in China.

The company builds “Pepper,” a four-foot-tall humanoid robot. Pepper has two arms, eyes, ears and a small smiling mouth. To use a non-technical term, Pepper is adorable. It can also tell corny jokes, or if you ask, it’ll dance.

Why built a robot that can't dance? This one can.

About 15,000 Peppers are deployed in Japanese and European banks, fast service restaurants and healthcare settings. Pepper is now in US bank branches too — HSBC has them in Manhattan, Los Angeles, Seattle and Miami, and more are on the way.

But what exactly is the point of putting Pepper in a bank lobby? Dawson says it’s a way for customers in the bank to get basic information, like about mortgage rates or credit cards, without waiting in line for a teller. Dawson says something unexpected happened with Pepper: A lot of people seemed to prefer interacting with a robot.

“Now whether that's — I’m going to feel judged because I don't want the platinum or black card — or whatever. We don’t really know what the actual science is, but we’re seeing more willingness to share information that the employees weren’t seeing,” says Dawson.

With a robot, it’s a low-risk interaction — you can just walk away without appearing rude. So, is Pepper going to take jobs away from people in the bank?

“Uhhh, we’ve been dealing with that question for a long time,” replies Dawson with a sigh. “So what I say, ‘We're not actually replacing jobs.’ As you saw with Pepper, we're replacing tasks. In the interaction with Pepper, it can't do everything that a human can do and that's not the intent of it.”

But studies have shown that advances in automation and robots have already cost millions of American jobs, and robots are only getting more advanced. Just look at the automotive industry.

Related: Automation could have a disproportionate effect on women's jobs

“In 1970, which was just about peak automobile manufacturing employment in most of the Midwest, what it took 1,000 workers to manufacture then, we can now do with about 250 men and women,” says Michael Hicks, an economist at Ball State University in Muncie, Indiana.

As artificial intelligence gets better and better, many are ringing the alarm bells: We’re all doomed. A Mother Jones article says that within 40 years, all of our jobs will be replaced — truck drivers, surgeons and CEOs. And baseball umpires. The article quotes a former Google executive, Kai-Fu Lee, warning that 50% of our jobs will be replaced by artificial intelligence within a decade.

“It's certainly reasonable to worry about that, but many of the people who talk about this today greatly exaggerate the likely consequences,” says Thomas Malone, a professor at MIT’s Sloan School of Management and director of the university’s Center for Collective Intelligence. “One of the main reasons I think that is that it's never happened in the past.”

Malone says we’ve been through this fear of machines and automation many, many times before.

“Think of the jobs of scribes in the Middle Ages, their job was copying text all day long," he says. "So the printing press essentially eliminated those jobs.”

And the publishing industry was born creating new jobs: typesetters, novelists, bookstore owners and newspaper delivery people. Still, what about the scribes? Did they find new jobs? Malone does worry about people who are being replaced by automation today.

Related: A new book suggests AI and robots will take jobs — but make the world better

“Can we do retraining? Can we do better job matching?” asks Malone, who calls this a “transition problem” that societies have long grappled with. Here in the US, job retraining programs are notorious for falling short.

Lose your job to a robot and it can be tough to find a new one, especially one with comparable pay.

“The next 10 years could be the best 10 years we've ever seen or the worst decade, and that depends less on the technology and more on the choices we make,” Brynjolfsson says.

Will the benefits of advanced robotics be shared by all of us, he asks, or just result in a few more billionaires?

He has a humanoid robot in the corner of his office. If a robot like that isn’t coming to replace a person, why build it to resemble one?

“We have a lot of our brains devoted to connecting with other humans," Brynjolfsson explains. "And we can piggyback on that when we communicate with machines, by for instance recognizing their expressions.”

But Ruth Thomson with Cambridge Consultants presents the other side of the equation when it comes to human-like robots: “There’s a whole different school of thought: Is the human element important enough and will it weird out people?”

At Softbank Robotics, they get that. Kass Dawson says there’s a reason Pepper was built 4 feet tall and has a child-like face and voice.

“The intent is to make it, I don't want to say, ‘cute,’ but to make it approachable and not seem like it's scary,” Dawson says. 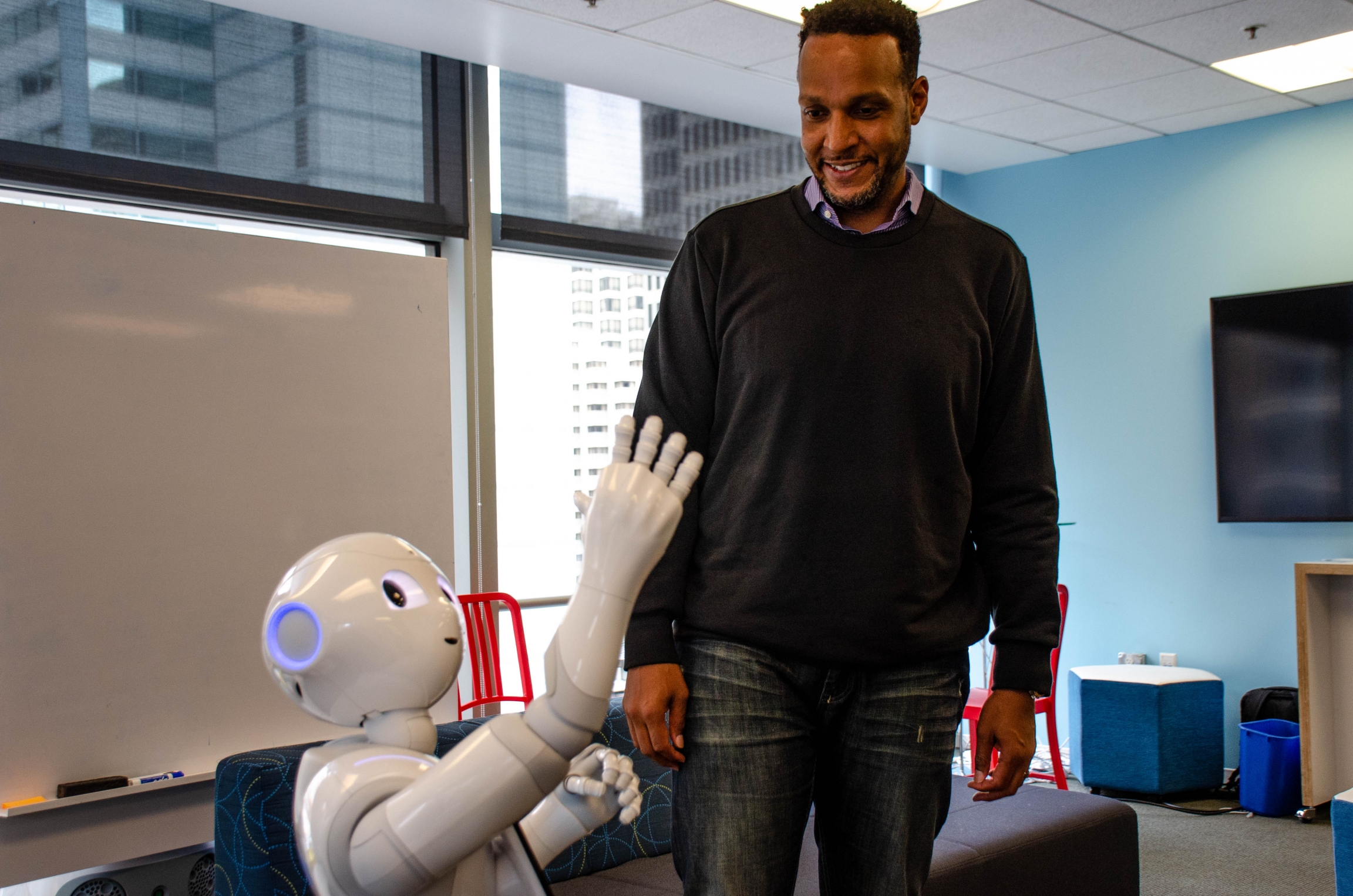 Softbank Robotics’ Kass Dawson, who stands 6-foot-5, interacts with Pepper, the robot. Dawson says Pepper was designed to be 4 feet tall to make it more “approachable.”

Dawson sees Pepper as a way to put more people to work — he points to rosier projections that for every job advanced robotics replace, nearly two new ones will be created.

“We're talking about programming jobs, managing the robots, understanding how human-robot interaction is important,” says Dawson, who adds — he, too, has a job, thanks to Pepper.