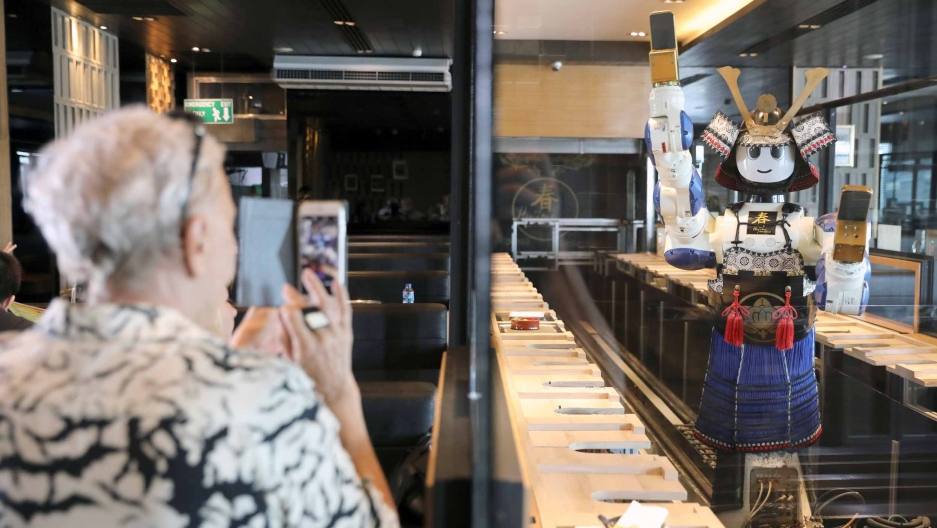 A robot waitress dances while a costumer takes a picture at the Hajime Robot restaurant in Bangkok, Thailand, in February 2019. Professor Richard Baldwin says in his latest book, "The Globotics Upheaval," that artificial intelligence will begin affecting white-collar jobs in the near future.

Richard Baldwin's newest book "The Globotics Upheaval: Globalization, Robotics, and the Future of Work" has some dire predictions.

"What's going to happen with this globalization and service sector automation, is many tasks — chores that people do now — will be done either remotely or automatedly and we will need fewer people to do the same amount of work," Baldwin told The World. "So there will be a displacement of jobs."

But Baldwin, a professor of international economics at the Graduate Institute in Geneva and the author of "The Great Convergence: Information Technology and the New Globalisation," says there is hope at the end of the process.

"It's just that we have to get from here to there," he said.

Related: Seniors are the evangelists of Finland's new AI strategy

Baldwin talked through some of the major themes of his book with The World's Marco Werman.

Computer technology has advanced at an incredibly rapid rate, even in just a few years. 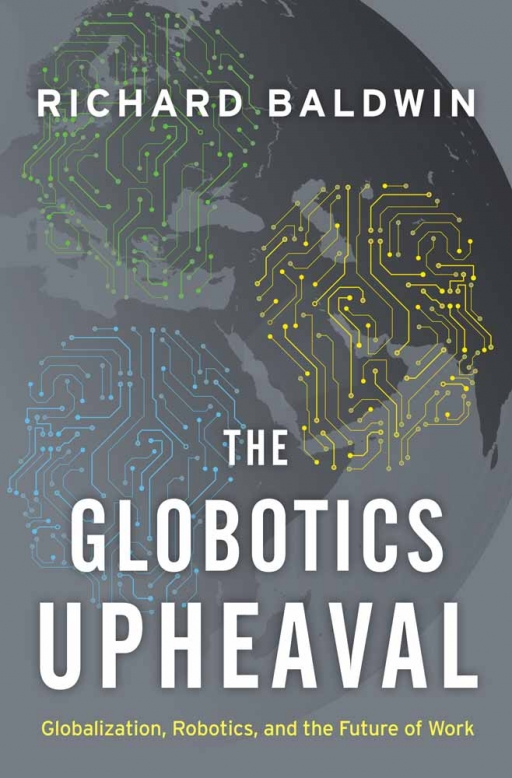 "Machines now — I mean computers, can see — they can talk," he said. "They can listen. They can translate, they can generate outputs, they can understand subtle patterns and they couldn't do that in 2015."

Marco Werman: So AI's going to get more muscular. You're also seeing platforms, I gather, like eBay and Alibaba turning into places where you don't just purchase goods and stuff. You also buy skilled professional services. What does that look like and do you see this happening already?

Oh yes. So Upwork — that's the largest one. It went public last year. And what they do, like eBay but for services, they help people who want to hire, say, for example, a logo designer or a translator or copyeditor, they help them find them somewhere in the world, pay them, manage them and have the whole product delivered. This is services.

Maybe the easiest way to think about it is freelancing gone global. Now, the way you can see this is already done in a big way is in industries like web development, where it's very common that a coordinator will get online people sitting in different countries — somebody doing the coding, somebody doing the user experience, somebody doing the graphic designs — and they're on the screen all day long working in some sort of virtual office, producing a really top quality website very, very quickly and for much less money than if it all had to be done in California or Germany or someplace like that. And I'm just projecting that this will spread to many other activities because ultimately there's a huge cost savings to be made by hiring lower-cost foreign service providers.

It will open up this international wage competition that we've never really seen before in the service sector. What's going to happen with this globalization and service sector automation, is many tasks — chores that people do now — will be done either remotely or automatedly and we will need fewer people to do the same amount of work. So there will be a displacement of jobs. That's the process. It's not like all of a sudden, an automated robot will take over the job of, say, a journalist like yourself or a professor like me.

You write about what some countries are doing to plan for this scenario. Denmark — what are they doing to prepare?

So the Danish model is they let firms hire and fire freely, whatever you want. But then the government stands ready to do whatever is necessary to get the displaced worker a new job. If they have to move cities, they give them support for that, if they need some income support in the meantime, they do that. Retraining, looking after the workers not the jobs. And it's one of the reasons why, in Denmark, they're willing to accept globalization and automation. They embrace it, in fact, because they know eventually everybody will have a fighting chance of winning — it won't just always be the displaced workers paying the adjustment costs.

Related: Saudi Arabia has a new citizen: Sophia the robot. But what does that even mean?

That suggests some progress, but I've got to say it's easy to imagine the dystopian scenario where humans are figuratively and literally prisoners of robots. One of the arguments you make, is that ultimately you think this can all be a good thing for society. So, how and why?

I'm a pessimist in the short run and an optimist in the long run. We will do the things that artificial intelligence and tele-migrants can't do. AI is very bad at the most human skills. So dealing with unknown situations, managing people, motivating people, ethics, creativity. Those are things that computers have trouble doing and so, our jobs of the future will be filled with those more human tasks. So I view this AI and the tele-migration as a good thing once we can get through the transition. People's jobs will be more interesting because all the robotic repetitive stuff will be done by machines. Things that can be done remotely will be done remotely and allow us to do things where we actually have to be together. So, ultimately, I think it will be a very, very good thing.

It's just we have to get from here to there.

In that transition, I can imagine what you're predicting could well make a lot of powerful people unhappy. Do you see governments falling because of this upheaval or are governments more likely to take advantage of the upheaval for their own power?

Well, I think the move for populism is no way near over. We're in a situation where it's almost like a powderkeg. People are feeling fragility and vulnerability and anger from the last wave of globalization and automation. And into this, we're going to throw this explosive pace of digital technology which will bring globalization and automation to a whole new set of people who've never seen it before — white-collar workers, professional workers — and I think they will be angry and wouldn't be surprised if we get a backlash that has a political element to it. Who knows exactly what the backlash will be against, but the common denominator of all this is digital technology.

Read an excerpt from "The Globotics Upheaval"