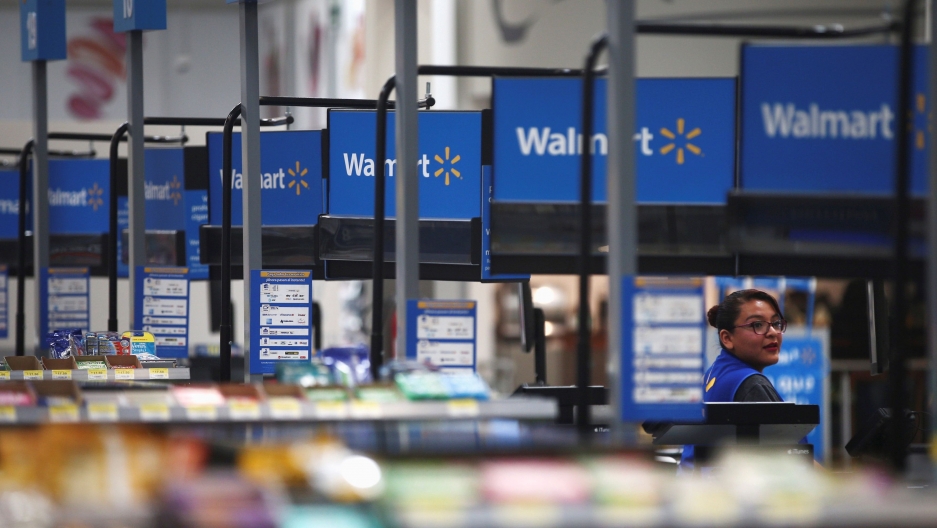 A cashier works inside a Walmart store in Mexico City, Mexico, March 28, 2019.

Happy equal pay day. At least here in the US.

Germany celebrated theirs last month by offering women a 21% discount on public transit for the day — since, on average, they earn 21% less than men. That's pretty close to the pay gap in the US, too.

In fact, if you calculate the pay gap between women and men in the US, you'd find that women have to work an extra 92 days to earn what men made in the calendar year 2018. In other words, today is the day when women actually start catching up to what men made last year. And that's just an average. Black women in the US have to work until late August to make parity. And Latinas? November.

But another employment issue is looming for women: automation.

A study that came out a few weeks ago says that nearly half of all jobs in the US are at risk of automation by the year 2030, and women are likelier to be affected by that shift than men. That figure holds true worldwide, as well. The study comes from the Institute for Women’s Policy and Research, a think tank in Washington that examines economic security for women.

Among the jobs expected to get eased out by robots and automation are truck driver and parking lot attendant, while Lyft or Uber drivers will be replaced by driverless cars. These jobs are typically associated with men, though.

So, which jobs held by women are at risk?

For one, grocery store cashier. Self-checkout lanes at CVS, Walgreens and Target are already a reality. Other jobs like office assistant or administrative assistant are also at risk, and they’re usually filled by women.

Jobs in child care or home health care will probably be OK. But here’s the problem with those kinds of jobs: They’re lower paying. Ariane Hegewisch, program director for employment and earnings at the Institute for Women’s Policy and Research, says that care work is highly undervalued. And while jobs in engineering and technology fields are higher paying, we still need people to care for other people.

“So, we really need to invest more in those care jobs because we can't have a society where everybody is just a software engineer,” she said. “We need care work, but care work is dramatically underpaid.”

Some countries like Japan are experimenting with using robots to do care work for the elderly — they help lead stretching exercises, deliver medicine and do some companion work. But human care workers there aren’t going anywhere, at least not for now.

What should women do to make sure they’re not totally at risk for losing their jobs in the next 20 years?

The institute suggests that women train for better jobs and go for higher education. That will help with the pay disparity, too. But the institute warns that sometimes women don’t stay in those higher-paying jobs because they often feel forced out by their male colleagues and typically, they’re the ones shouldering child care or other family responsibilities.