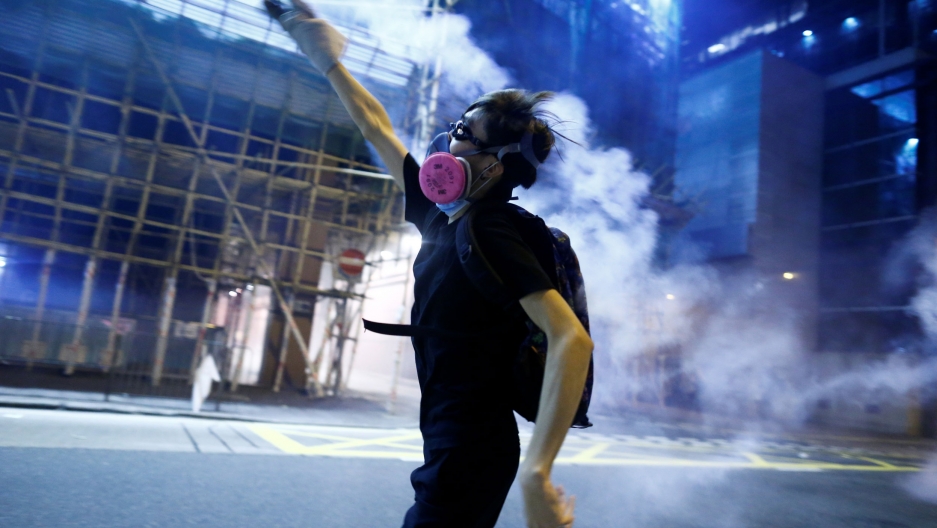 An anti-extradition bill protester throws a tear gas cartridge during clashes with police in Sham Shui Po in Hong Kong, China, on August 14, 2019.

China said on Wednesday Hong Kong's protest movement had reached "near terrorism," as more street clashes followed ugly scenes a day earlier at the airport where demonstrators set upon two men they suspected of being government sympathizers.

By nightfall, police and protesters were again clashing on the streets, with riot officers shooting tear gas almost immediately as their response to demonstrators toughened.

Flights resumed at Hong Kong airport, which is one of the world's busiest, after two days of disruptions. Thousands of protesters have occupied the airport for days, forcing the cancellation of hundreds of departures on Monday and Tuesday.

Ten weeks of increasingly violent confrontation between police and protesters have plunged the city into its worst crisis since it reverted from British to Chinese rule in 1997.

"We're deeply sorry about what happened yesterday," read a banner held up by a group of a few dozen demonstrators in the airport arrivals hall in the morning. "We were desperate and we made imperfect decisions. Please accept our apologies," the banner said.

They also showed little sign of relenting in their protests, which began in opposition to a now-suspended bill that would have allowed the extradition of suspects for trial in mainland China, but have swelled into wider calls for democracy.

Zeynep Tufekci, a professor who researches the intersection of technology and society at the University of North Carolina at Chapel Hill, witnessed some of the violence in Hong Kong and spoke with The World's Marco Werman about the future of the protest movement, its pitfalls, and role of social media in their quest for democracy.

Marco Werman: Is what you saw suggesting emerging divisions in the ranks of the protesters?

Zeynep Tufekci: I don't think so — if anything, today they've issued an apology. They had a lot of discussions in their forums ... This is a bunch of very young people. Most of them haven't slept [for five days] — they're at the airport trying to get heard. It feels like a hopeless thing; it was a very high stress situation, and today, there's a lot of soul searching. As in, how did we get to this point?

Is there also fear?

There is a lot of fear because they feel a lot of the ones I talk to, feel like the world doesn't care about them — China's too important. And a bunch of young people trying to keep democratic rights or demands feel like they're being treated like a nuisance by the world. So they feel — from what I can see — that it's quite futile, but they're just going to go down the best they can and try.

You study how social media is used politically, even in revolutionary movements. Now the Chinese mainland is hailing the two men who were beat up at the airport as heroes. China is talking about acts of terror in Hong Kong. How does this face-off look on social media?

Obviously what happened was terrible, but what I'm seeing is a lot of efforts that are out to discredit the whole demand — the demands being quite reasonable.

The demands of the Hong Kong protesters?

There's universal suffrage, independent inquiry, and releasing arrested protesters — you know, super basic demands, and now there's a huge social media campaign to use that incident to portray the whole movement as just "terrorists" and violent. So ... the information sphere is where the battle is. Because if you're just turning on TV and you're in mainland China and you just see this — it's [just] a couple of clips from an hourlong incident, and you don't really get the rest of the context ... because that's censored — you might feel justified by the harsh steps that China mainland might decide to take. And also the world might feel like, 'Oh, look, this is just another violent movement,' which isn't a correct characterization.

How were the Hong Kong protesters using social media themselves in these demonstrations? Do you think it's unique? Or does it pick up threads from other movements that you followed?

It's pretty amazing what's going on in Hong Kong in terms of the use of the internet. Unlike the Arab Spring countries that I've also studied, where there was some very efficient use of digital technologies, Hong Kong is a super high-tech place. The internet works very well and very fast, everybody's digitally literate and otherwise literate, [there is a] very high education [level]. They have lots of phones and they're using forums. They have their own forums and they're using Telegram as a place where they hold a lot of these discussions. In fact, apologies for yesterday's incident came out of these forums there — the soul searching, and 'we shouldn't ever let this happen again' came out of these forums. So I don't really know how it will play out, but everybody's so digitally adept. The way they swarm and make decisions online and the way they swarm offline and go from place to place is a very 21st-century movement. Ironically, they're making demands for things a lot of people [wanted] in the 19th century — just universal suffrage. So there is a very stark contrast with the high-tech high functioning society, which doesn't even have some of the basic rights that are almost universal in many countries.

Well, mainland China is also digitally adept: it's at the forefront of surveillance technology. I'm curious just how protesters in Hong Kong are dealing with that?

There are a couple of things that they're dealing with in terms of surveillance technology: Obviously, the phones are tracked and they're aware of it. Some of them have multiple phones and some of them turn off their phones. They wear a lot of masks and [they use] umbrellas to block CCTV when they get off at a subway station: The first one jumps out and opens umbrellas covering all the visibly closed circuit CCTVs. And then when they want to make decisions, they open their umbrellas and huddle under it. It's not fully protective against surveillance, but just like many other ... surveilled [people], when I asked them if they were worried about surveillance, they usually say, "There's so many of us. There's hundreds of thousands of us in the streets." And that's probably their only real protection. I don't think they can [remain undetected] even with their umbrellas and cool tactics. I don't think they can avoid the surveillance, so they're just counting on the fact that they probably cannot jail that many of them all at once.

Do you think that's a fair piece of insurance?

As long as they're protected by the society, probably. But if there's some sort of compromise in which the Hongkongers — the well-off middle classes and the financial centers — decide that they're just going to give in to authoritarianism in return for just having business as usual ... it might not be. And a lot of the ones I talked to, they don't have, of course, any memory of Tiananmen, they're just way too young for that. But they heard from their elders about how people fled to Hong Kong after that. And elsewhere too. And a lot of them are like, 'Is there a place in this country for us? Is there a place in the world for us?' Because, as I said, they're highly educated — they're literate, and some are wondering if they should even try to save their own country if it's going to be futile, and [if they] should just try to emigrate. So I think that's sort of the reality — they cannot truly escape the surveillance that mainland China can bring to this city. And they also probably cannot escape the consequences. So here we are.