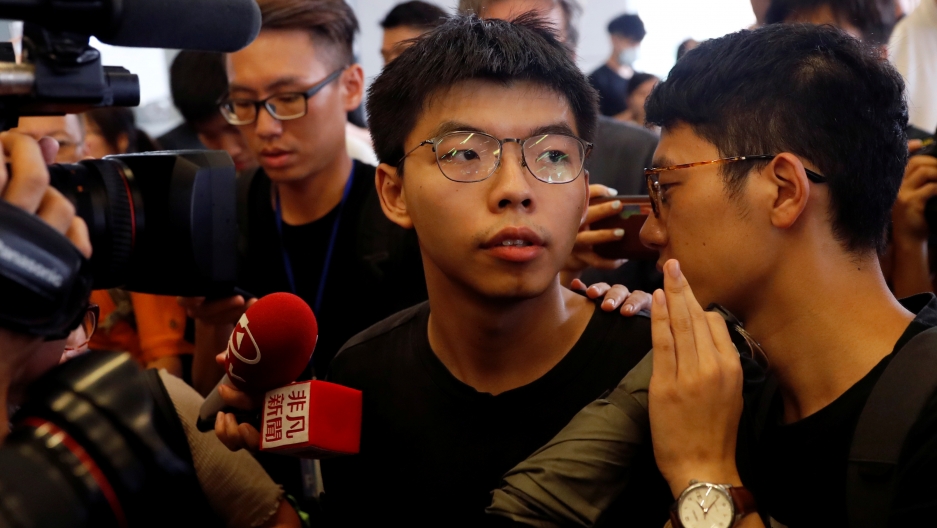 Pro-democracy activist Joshua Wong talks to the media outside the Legislative Council during a demonstration demanding Hong Kong's leaders to step down and withdraw an extradition bill.

The movement for democracy remains strong in Hong Kong after 2 million people took to the streets this month to protest a controversial extradition bill. The bill would allow extradition between the semiautonomous Hong Kong and mainland China, which does not have the same human rights protections nor independent judiciary as Hong Kong. Activists expect protests to continue on July 1, which marks the date that Hong Kong was handed over to the People's Republic of China from the United Kingdom in 1997.

One of the activists leading Hong Kong's pro-democracy movement is Joshua Wong. He was just released from jail earlier this month after he was prosecuted for contempt for his role in 2014 protests. He spoke with The World's host, Marco Werman, about what he hopes to achieve through demonstrations against the Chinese and Hong Kong governments.

Marco Werman: You were one of millions of Hong Kongers who took to the streets recently fighting this extradition law proposal. Hong Kong Chief Executive Carrie Lam called the protests a riot and said that you were challenging authority in Hong Kong. How did the police respond?

Joshua Wong: Police used rubber bullets and shot peaceful activists with equipment such as tear gas and pepper spray to suppress thousands of activists who had urged the government to withdraw the evil bill.

An independent investigation is a must, especially on police violence to us millions of activists.

I urge the Hong Kong government to be aware that next Monday, the anniversary of Hong Kong's handover, will have more than a half million or even 1 million people join the strike again. This is the time for Beijing's and Hong Kong's governments to listen to the voice of Hong Kong's people.

The day that you're focusing on for protests is July 1. That's the traditional day of protest in Hong Kong. I suppose a recent display of people power upwards of nearly 2 million in the streets of Hong Kong has set the mood. How will this year's demonstrations be different from last year's?

Last year, we had only around 100,000 people on the street, but I believe that on July 1, we'll have more than half a million people join the strike. We urge the government not only to suspend the bill, but fully withdraw the evil law.

Let's say that extradition law was not a proposal — that it was in fact, law — how would that affect you?

If the extradition law is passed, it would allow for the extradition of any individual or ordinary citizen from Hong Kong to mainland China, a place without fair trials. That's why people have gotten out on the street with their anger and power to urge the government to respect judicial independence and fair trials.

Joshua, you've had several episodes in Hong Kong's jails and it's really all a function of this odd relationship between Hong Kong and Beijing. You were in jail for a month recently and then went right back to the streets without even a change of clothes. How come you're getting arrested so much?

I am the one who led the Umbrella Movement five years ago, and we've faced political crackdowns, especially crackdowns on human rights and political persecution. Now, it's not only myself. There's still 20 political prisoners in jail. I'm not sure what kind of massive persecution might happen, but we would never step backward.

The Umbrella Movement was in 2014. How has your life changed in the last few years?

The Umbrella Movement is the campaign, or the strike, and civil disobedience. We asked for free elections. We believe that instead of allowing Beijing to appoint anyone serving the interests of a communist regime, people have the right to a freely elected leader of our city. That's why we have no regret at all, even though we have already paid the price of being persecuted or being jailed.

You are 23 years old, though. I mean, it's a time when many young people in the West are carefree. How do you feel about spending your youth in this movement?

Millennials show determination and passion to join in this strike. That's why we will continue our battle and urge people to stand on our side and to show that this is a time for people to determine our own future instead of allowing Beijing to dominate our own destiny.

It all comes back to this very strange relationship that isn't really quite night or day between Hong Kong and Beijing. Is it frustrating for you?

People might feel down or depressed, but we are not frustrated at all because even though we are facing the largest authoritarian regime in the world, we are continuing our strike with our passion.

I'm not sure how many people will get out on the streets again on July 1, but Hong Kong is a city with only 7 million people. When already 2 million people join our strike and fight for freedom and democracy, it really impresses a lot of people around the world. We will continue our battle until the day we have democracy.

So, you're in Hong Kong right now Joshua, but I know the movement has several hundred representatives in Osaka at the G20. I know you're calling on G20 leaders to voice concerns over what you say are Hong Kong's waning freedoms, but are they really going to listen even with several hundred protesters right under their noses?

Japan's prime minister has already met with President Xi Jinping and has raised concerns about the extradition law amendment and the "One country, two systems," stability. I believe in the next one to two days, during the G20 summit, world leaders will also take the reference from the prime minister of Japan to meet with President Xi about what's going on in Hong Kong.

You're getting a lot of attention as one individual in a movement that is supposed to be leaderless. How do you feel about that?

I just hope to improve my experience and to deliver a voice from the people of Hong Kong to the international communities. The movement now is more self-initiative, organic and leaderless.

Beijing just can't easily silence our voices, and we will continue our strike.