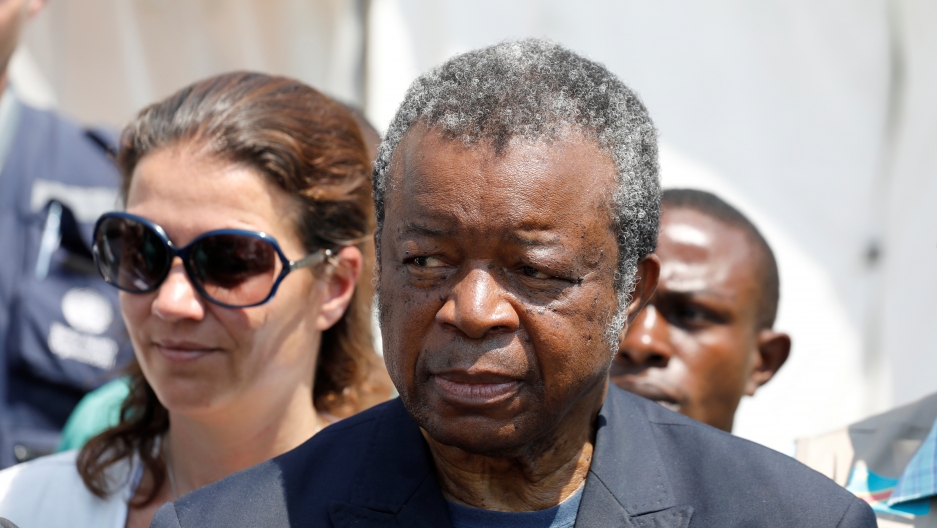 A clinical trial has shown that two new drugs — mAb114 and REGN-EB3 — improve Ebola patients' survival rates by a significant rate, scientists say. The results mark the first time doctors feel confident that Ebola, a deadly disease that has killed more than 1,800 people in Democratic Republic of Congo, is now "curable."

"Today, we took a new step," said Jean-Jacques Muyembe, the director general of the Institut National de Recherche Biomédicale in DR Congo, which helped oversee the trial. "From now on, we will no longer say that Ebola isn't curable."

The trial was named "Pamoja Tulinde Maisha," which translates to "together save lives," in local Swahili.

Muyembe has been working with the World Health Organization and the National Institutes of Health on the trial that tested four therapies — ZMapp, remdesivir, mAb114 and REGN-EB3. The tests began in November last year as part of the emergency response to the ongoing Ebola outbreak in the North Kivu and Ituri Provinces. That trial was just halted now that doctors found the two most effective drugs.

Anthony Fauci, the director of the US National Institute of Allergy and Infectious Diseases, which was a co-sponsor of the trial, spoke with The World's Marco Werman about the significance of the new effective therapies and their development process.

Marco Werman: Just how big of a development is this news?

Anthony Fauci: This is a very important advance in the treatment of Ebola disease. Prior to this particular advance, we really did not have any adequate direct therapy aimed at decreasing the mortality of patients with Ebola virus disease. Now [we have] two drugs which are highly effective and very significantly diminish the mortality of Ebola virus disease. I think [this] is a huge advance in the treatment of this very, very difficult disease.

Just how effective are these drugs, and are you calling this a vaccine?

We just heard Muyembe in the DR Congo say that Ebola is no longer incurable. So, is it a cure? Would you call it that?

I don't use the word "cure" ... because this is a [complicated] disease. There are some people who spontaneously recover, even without any therapy and only [with] a [basic] standard of care. So I tend to frame this in the context of diminishing a very high mortality disease to now [it being] a very low mortality disease. ... I wouldn't argue with people that are calling this a curative intervention, [but] I think it's more accurate to say it's an intervention that dramatically diminishes the mortality.

[In] 1995, Muyembe brought a Congolese patient to the US — was that the beginning of the story that resulted today in these two effective Ebola treatments?

I imagine people have very mixed feelings about being test subjects during a life or death situation. The former health minister of DR Congo resigned over debates around whether to try out a second experimental vaccine. People want drugs that will help them, so I have to ask you, how do you ethically do a trial during an outbreak?

Well, if you don't do it this way, you're being unethical, and let me explain what I mean: We don't know what works. So you can't say you're withholding a drug that works. You're trying to find out as quickly as you possibly can which is the best of these drugs. You're not giving somebody nothing. You're giving them [a basic] standard of care, plus one of four drugs in the trial. And as soon as you find out which is the best drug, you stop the trial and give everybody the best drug. That is overwhelmingly the most ethical way to conduct any kind of process such as this in the middle of an outbreak. To do anything else, [for example] if you just gave anybody anything and never determined if it worked or not, you would never know if something worked and you could conceivably be giving a lot of people a completely ineffective drug. That is the underlying core principle of an ethically and scientifically sound clinical trial.

We know Ebola is incredibly infectious. But there is a civil conflict [and] there are security problems. There's mistrust. How do you get these drugs deployed in the middle of this conflict zone?

That's an excellent question. It is not easy. That's the reason why this was such an amazing accomplishment — to be able to not only conduct a trial in the middle of an outbreak, but to do it in a way that you get a meaningful answer. It was dangerous. Several of the people who were involved in the Ebola treatment units were actually either wounded or even killed because of the violence. So, it was done, but it was done in a way under very difficult security conditions. One of the things that we hope that now [can happen] is when people realize that we do have an effective therapy for them, that they will be much more likely to come into the clinics early and get treatment that can save their lives. Early on, sometimes there was a reluctance to get involved in the treatment units because of a mistrust of the system. This will add a lot of credibility to people in knowing that there is now something that can save their lives.

In your years as a scientist you've been notable for your contributions to understanding and treating HIV, as well as other, previously fatal diseases. How does this Ebola development compare?

I think it rates up there really at the top, because whenever you have a disease of which most of the patients who get the disease die, and then you come up with a therapy that can save lives — that is always a very gratifying feeling. This is somewhat similar to years ago in the 1980s and early '90s when I was taking care of hundreds of HIV-infected individuals. Virtually every single one of them died, and then over a period of several years we developed combinations of therapies which have now completely transformed the lives of HIV-infected individuals so that they can lead essentially normal lives. That was probably the most dramatic turnaround and accomplishment in my knowledge of biomedical research history when it comes to infectious diseases. The Ebola situation now isn't quite yet there, but it certainly is a first step towards being able to very adequately treat a disease that otherwise had a high degree of mortality.

The interview has been edited and condensed for clarity.