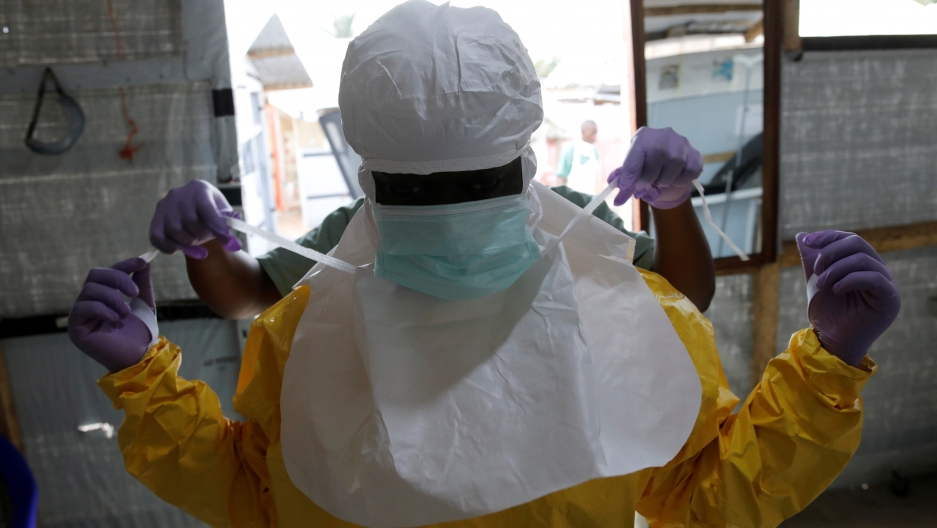 Around the world, there's a rising distrust in public health. From widespread rumors about measles in the United States to massive distrust around the Ebola outbreak in the Democratic Republic of Congo, public health officials are struggling to prevent and contain diseases while dispelling rumors.

DR Congo's health ministry says more than 1,400 people have died since the Ebola outbreak started last year. While this is far fewer deaths than the West African outbreak five years ago, it could get much worse, largely due to armed conflict in the region where the Ebola outbreak has occurred.

More than 300,000 people have fled inter-ethnic violence in the northeastern DR Congo since early June, complicating the tracking and treatment of patients at risk from Ebola, according to United Nations aid agencies.

At least 161 people have been killed in a northeastern province of DR Congo in mid-June in an apparent resurgence of ethnic clashes between farming and herding communities.

Babar Baloch, a spokesperson with the United Nations High Commissioner for Refugees, says there is fear that escalation could engulf large parts of the province, amid reports of killings, kidnappings and sexual violence unleashed against civilians. The government is trying to bring the clashes under control, he added.

An Ebola epidemic in DR Congo, which also spread to neighboring Uganda, has caused 2,168 infections since August.

Laurie Garrett, the author of "The Coming Plague," has been following Ebola in Africa for decades. The World's Marco Werman sat down with Garrett, who says that unrest in DR Congo makes Ebola an even bigger threat.

Marco Werman: You've been through three Ebola outbreaks. One of them happened in the Democratic Republic of Congo in 1995. On this latest outbreak, you're tracking the numbers. What are you seeing that distinguishes this outbreak from others you've witnessed in the past?

And practically, what does that mean for the ability to address the disease?

Several things. First, you can't freely move about unless you're prepared to pay ransom money to armed groups as you approach a bridge or enter a village. There have been a number of health care workers, two assassinated and several more shot in the line of work or threatened and attacked in their homes. More than 180 assaults have occurred on Ebola treatment centers, diagnostic centers and clinics.

The second aspect to this is that the level of distrust is so high, coupled with a quite justified distrust of the Kinshasa DR Congo government, 1,500 miles away — with a long history of corruption — fueling a kind of overdrive on the sorts of rumors that always swirl around epidemics.

And it doesn't matter whether you're in Africa or you're in New York City, there are always rumors, falsehoods, out-and-out lies and conspiracy theories that go around outbreaks and public health campaigns. Just look at what we're dealing with here in this country with measles and parents [who] have reached the conclusion that measles vaccines will somehow sicken their children.

Well, now, compound that by many orders of magnitude where you have violent organizations that have absolutely destroyed any sense of trust in communities. And now the rumors start spreading: "Oh, the foreigners brought it. Oh, they brought it so they can steal their body organs and sell them in Europe. Oh, they brought it from outer space. Oh, it's connected with the conspiracy of [Joseph] Kabila stealing the election and installing his corrupt crony as the new president of [DR] Congo in an election in which our districts were forbidden and were disenfranchised and not allowed to vote."

So you start to see these rumors building, one upon another.

This is not your average outbreak. You're describing major problems including the mistrust, the political dysfunction and violence that has prompted a lot of nongovernmental organizations to pull out of DR Congo. It sounds like what's needed is a multinational, multipronged effort to deal with this. Is that happening in any form?

Well, the good news is we have a lot of very skilled, very smart well-trained African disease responders. For the first time, there's now an African Center for Disease Control modeled after the American CDC [Center for Disease Control]. And there are many Africans who were involved in the huge epidemic in West Africa that went from 2014 to 2016 and gained tremendous skills on everything from how to track down cases to how to safely bury bodies. So, we have a really strong Pan-African response. So that's the good news. And the other good news is that we have a vaccine that works — more than 115,000 people have been vaccinated. The bad news is that that's just not enough. First of all, why only 115,000 vaccinated? Because it's so dangerous to get out into the villages and vaccinate. Secondly, it's underfunded — the kind of scale of global response with billions of dollars —that is not happening.

If you were advising the players here on a solution for DR Congo's Ebola outbreak, what would you tell them?

I would tell them that they need to bring in some serious diplomatic power. They need power that is far beyond the expertise of people trained in public health. Public health people are brilliant at what they do, but they don't know how to negotiate between armed forces.