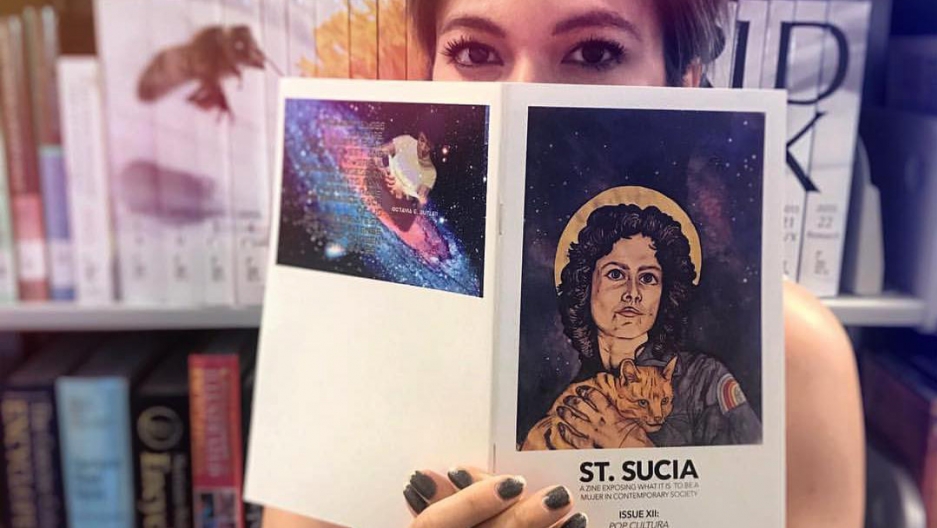 Courtesy of Isabel Ann Castro and Natasha I. Hernandez

St. Sucia is not your typical saint. From immigration and work-life balance to dating and sex, nothing is too taboo for this rebel to tackle.

But St. Sucia doesn't live in a chapel or a cathedral. She is the creation of San Antonio-based Latinx artist and illustrator Isabel Ann Castro.

“I told them that they can’t be asking the Virgin or Jesus Christ to help them out with their cochina problems. They needed a saint to understand. A saint that was a ‘dirty girl’ too.”

“I created St. Sucia in college as a joke amongst my friends [who] would clutch the saints on their necklaces hoping their date would go well, they’d pass a test they didn’t feel ready for, their period would come,” Castro explains via email. “I told them that they can’t be asking the Virgin or Jesus Christ to help them out with their cochina problems. They needed a saint to understand. A saint that was a ‘dirty girl’ too.”

Castro set out to fill a void she felt when it comes to navigating life as a young Latinx woman, along with writer Natasha I. Hernandez.

And so, St. Sucia, patron of the unapologetic modern Latina, was born, taking shape in 2014 as a zine in which voices and stories that are often lost in mainstream media — Afro-Latinas, Central Americans, LGBTQ and feminists — are featured.

Related: After decades in the shadows, Russia's feminists grab their spotlight 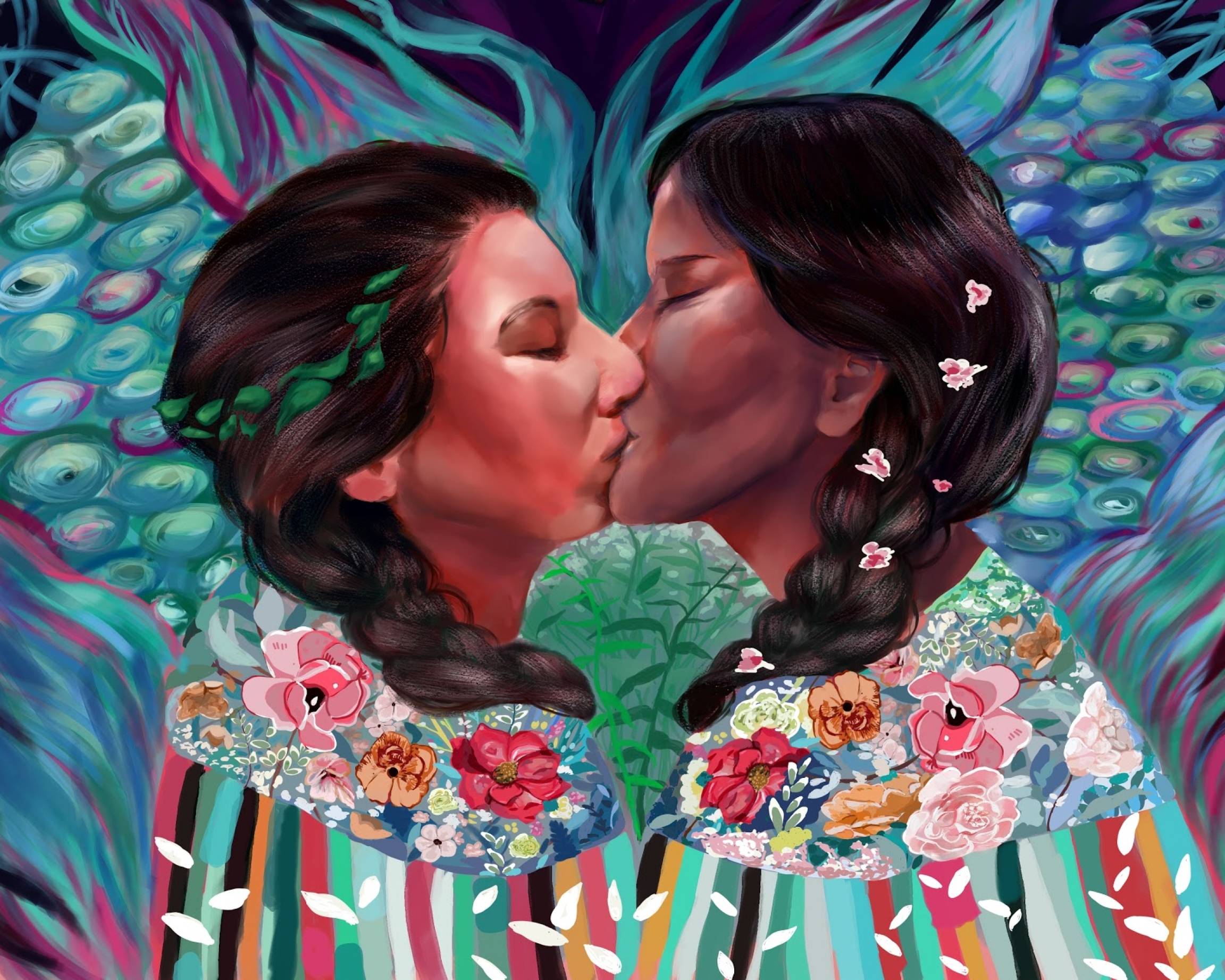 Zines have maintained popularity, particularly among Latinx communities in the US. Because zines most often have circulations of not more than a couple hundred or thousand copies, their collectability and overall lore can become huge. Zines have also been a hallmark of many modern movements relating to resistance such as Black Lives Matter, Me Too and Undocumented and Unafraid.

Despite her name, St. Sucia goes rouge from the Catholic religious tradition of turning to a particular saint for comfort in times of need. From a cheeky quiz asking “What Lotería Lady Are You?” to the countdown list “10 Things I Learned About Relationships Via Selena Lyrics” (both found in Issue I: La Primera), the zine strikes a balance between humor, outreach and camaraderie and is infused with Latinx culture.

St. Sucia is a figure who “loves you without judgment for who you are,” say Castro and Hernandez via email. “She won’t sweep anything under the rug. She doesn’t care what people will say.”

Around 30 submissions, mostly solicited from friends around San Antonio, were considered for the first issue in 2014. But by the second, published in the spring of 2015, Castro and Hernandez were sifting through three times as many. Soon, fans from San Francisco and Los Angeles to Chicago to Boston were taking note of St. Sucia. Online orders increased and so did issue requests from independent bookstores. 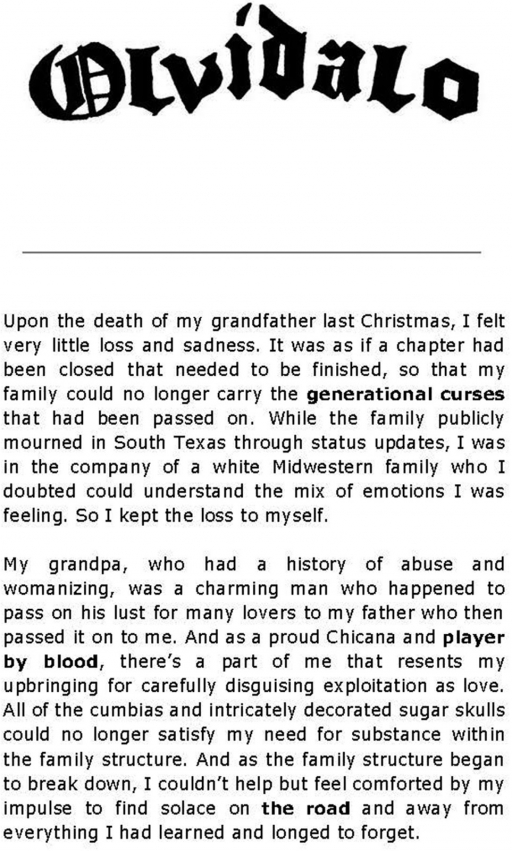 Castro and Hernandez decided that sex positivity would be the focus of the first issue, while many dozens of submissions focused on difficult and intimate topics — including reproductive rights, immigration, and family stories — set the tone for each of the 13 subsequent volumes.

The decision about what to include in each issue has been driven by their audience. Castro and Hernadez looked to recurring themes among submissions and the reader feedback via letters and social media to guide them.

“Everything that our zine became is because we listened to what is important to our community,” Hernandez says.

Castro continues, “We’d read their work, love it, and get to write back that they were going to be published. It was a rad feeling to help change someone[s] narrative and say ‘your voice matters.’”

“We are very proud to be in libraries and archives to add a little more to the very short list of Latinas in those institutional places."

“We are very proud to be in libraries and archives to add a little more to the very short list of Latinas in those institutional places,” says Hernandez.

Barbie Hurtado is a reader turned contributor. She says St. Sucia has been a game-changer in fostering her own sense of Latinx pride.

“St. Sucia was meaningful because it gave us a platform to talk about all the things that go unsaid, that Latinx families don't talk about that are taboo like sexuality, menstruation, body love, enjoying and having sex, etc.,” Hurtado explains. “St. Sucia was unique because it was unapologetically visible.”

St. Sucia herself takes no physical form, a creative decision that Castro and Hernandez stand by.

“There is no specific way to be Latina/x. [St. Sucia] shifts in the minds of readers to what they want and need from a saint.”

“There is no specific way to be Latina/x,” Castro says. “She shifts in the minds of readers to what they want and need from a saint.” 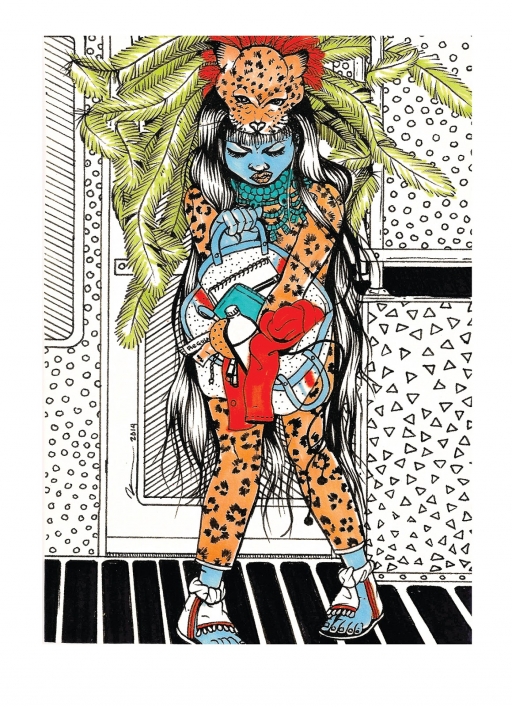 The zine ended publication in early 2019, but Castro and Hernandez are still hard at work. They are organizers of the San Antonio Zine Fest and participated in the Texas Latino Comic Con this July. Next, they have plans to begin writing for a new web series that is “sex positive and just as honest in the same ways that the [St. Sucia] zine was,” Castro says.

She is also working on a new zine project, “Está Bueno Archives,” that exposes aspects of San Antonio’s gentrification.

“Our city is facing sweeping, violent gentrification,” Castro says. “In my fear of my life being whitewashed and sold off, I’ve been trying to document as much as possible.”

St. Sucia and her legacy has evolved to more than just a zine. Over the 14 issues and nearly five years Castro and Hernandez say they have been able to “elevate voices of Latinas.”

“I would like for her [Saint Sucia] to live on as the idea of a moment when Latinas saw themselves as radical, as powerful, as seen in our pages,” Hernandez says.

Kaitlin E. Thomas is an assistant professor of Spanish at Norwich University and specializes in Latinx culture.