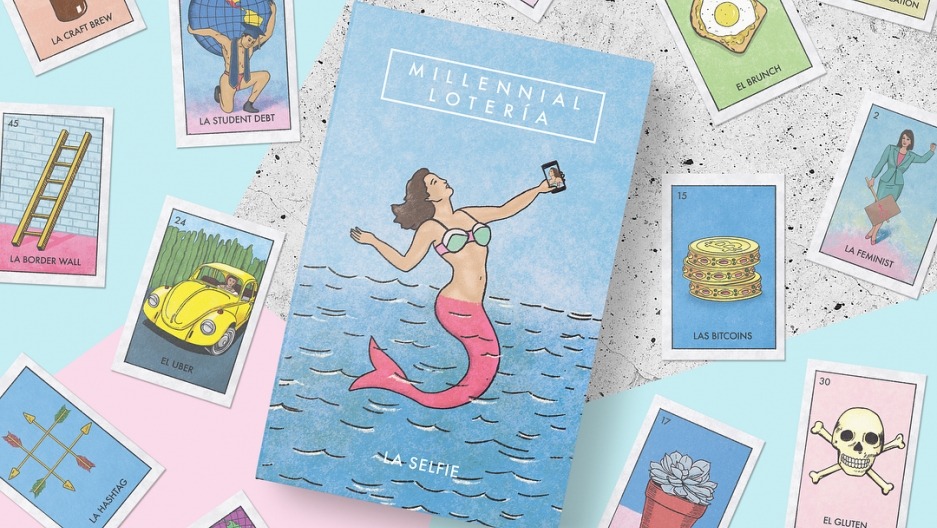 Few games are as beloved as lotería, a bingo-like game of chance that is mega-popular in Latin America. But what happens when iconic images become out of touch with modern times? Young Latinx activists are revamping the old school lotería with cheeky images that confront millennial stereotypes. And their reimagined illustrations have sparked both positive and negative reactions.

Mike Alfaro, a self-described pop-culture fanboy and the creative mind behind Millennial Lotería, grew up playing the traditional version in Guatemala. The game originated in Western Europe coming to Mexico by way of Spain, but it was popularized by Frenchman Don Clemente Jacques. Jacques’ manufacturing plant used the original images on labels, and the popularity (and collectability) of lotería cards grew.

Each of the traditional playing cards shows a concept based on a riddle with a moral or social innuendo — the sneaky little devil warning of bad behavior, a beautiful mermaid warning to keep a clear head or the drunk and his bottle to caution against addiction. 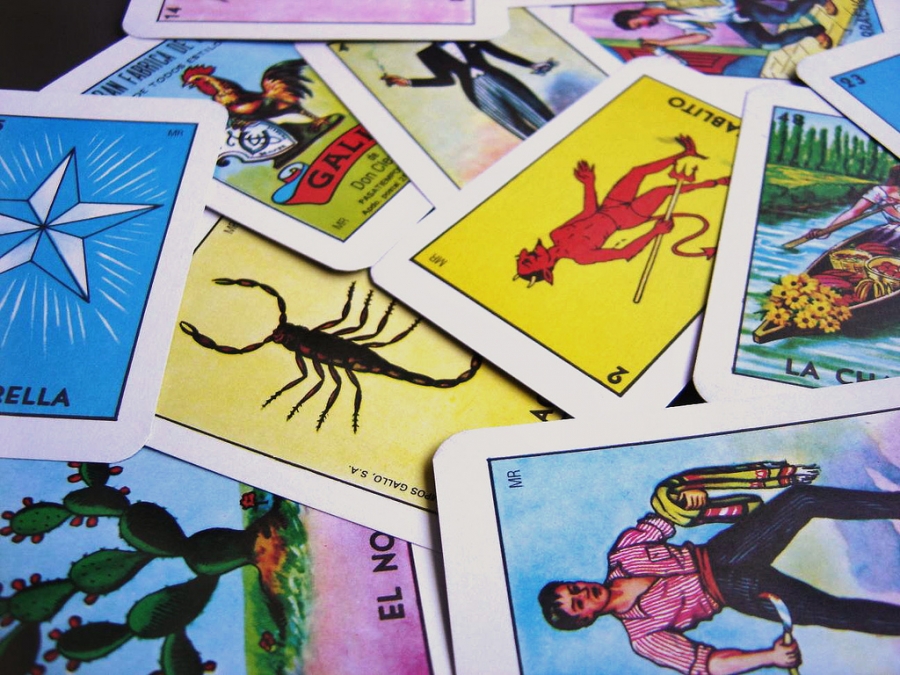 Each of the traditional lotería playing cards shows a concept based on a riddle with a moral or social innuendo.

After coming across an old set and panning through the cards, Alfaro says he felt the images were outdated. Alfaro’s modernized version started as a small Instagram account with a few hundred followers, but the redesigned cards have gone viral — growing into a loud and proud lotería community of nearly 42,000 followers.

Just like in bingo halls across the US, a typical lotería game is led by an announcer. While American bingo is a simple call-and-identify game (B4 anyone?), a lotería announcer has a bigger responsibility — making witty puns or risqueé innuendos for each card that reference current events and catering to the audience’s mood. Sometimes prepared ahead of the game, other times improvised, the result is a vibrant, hilarious and, at times, bawdy intellectual challenge.

Following in the footsteps of its predecessor, Millennial Lotería doesn't shy away from incendiary topics but refocuses on issues relatable to many millennials. From global warming and student debt to gay rights and gender equality, the redesigned game challenges traditional tropes of Latino culture such as religion, sexuality and sexual orientation, politics, and much more. 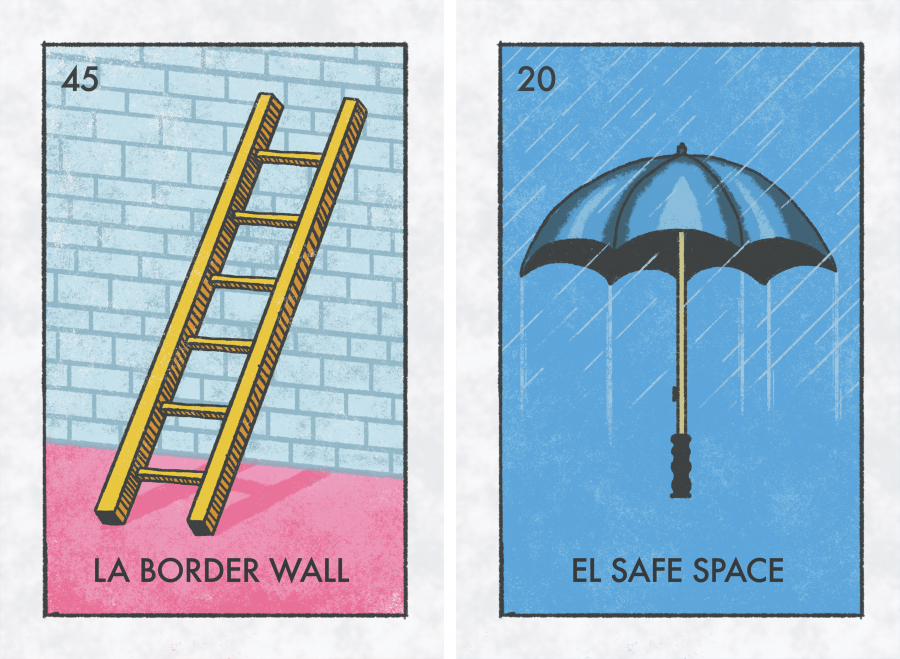 Context is king in the redesign of "La Escalera" as "La Border Wall," which points to US President Donald Trump’s proposed wall to separate the US from Mexico. "El Safe Space" rethinks "El Paraguas" — solace can be found under the figurative safe space umbrella.

Each card is redesigned with Millennial Lotería’s followers in mind. They are the badass, empowered Latinx women who see themselves as the loud-and-proud female portrayed by "La Feminist" as opposed to the prim and dainty "La Dama." They are the immigrants for whom "La Border Wall" represents shared immigration struggles and stories. "La Student Debt" is the weight of the mountains of student loans young people are undertaking to finance higher education. "El Safe Space" is a shout out towards inclusivity for the often-marginalized Latinx LGBTQ population. And "La Protest," a special release for this year’s Super Bowl that is not in the game set, brings awareness to the treatment of minorities in the US and addresses difficult conversations about race. 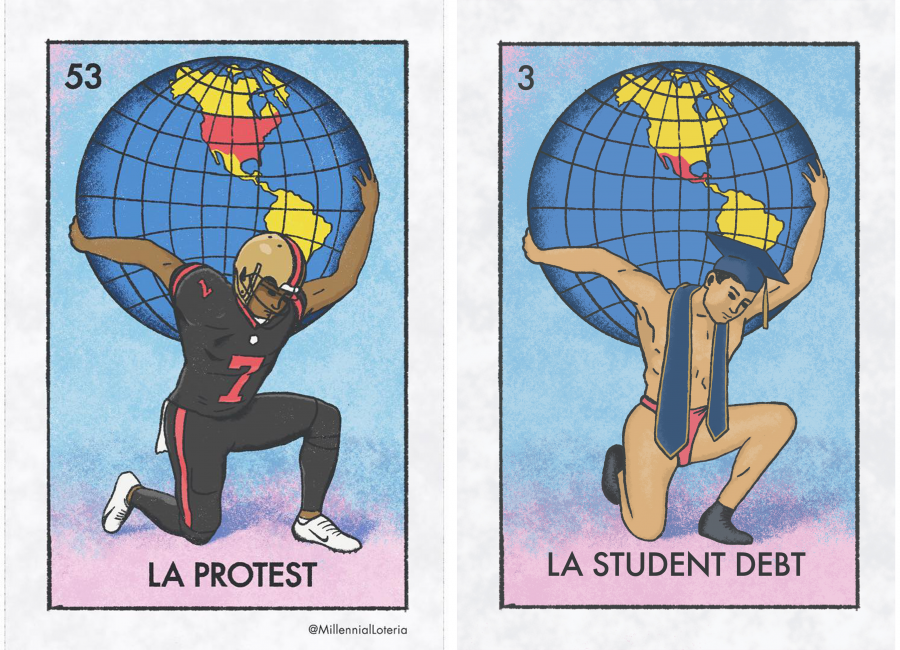 Both plays on "El Mundo," "La Protest" (not in the current set) is an homage to Colin Kaepernick and the controversy surrounding football players taking a knee during the US national anthem to bring attention to mistreatment of minorities, while "La Student Debt" highlights the burden of having to carry the weight of financing education.

Some “haters” take issue not just with changing a classic game, but also with incorporating English (or Spanglish) words. For some, contaminating a once purely Spanish language tradition is just too great of an offense — or just another way millennials are ruining everything.

But the controversy doesn't intimidate Alfaro. 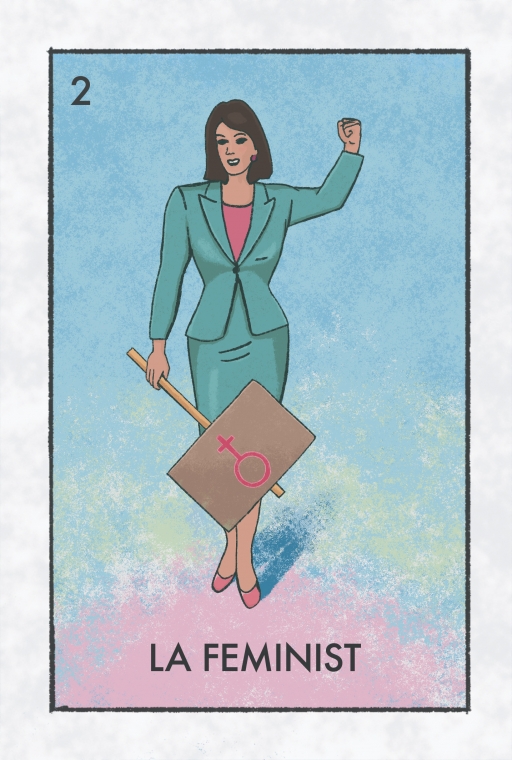 "La Feminist" raises her fist in defiance and takes up a protest sign speaking to the empowerment of women and their choices.

“If anything, all the negative comments seem to get me even more attention and support from other millennials,” he wrote in an email. “We’re tired of boomers criticizing us. In a way, this whole game was about owning who we are — the good, the bad and the silly. It’s about being proud of being Latinx millennials, no matter what others say.”

Hundreds of fans have shown their support in comments that range from earnest emoji enthusiasm (🔥😎🙌👏🏼✊🏼😍 ) to posts that thank Alfaro for creating a game for the Latinx community. Many others express how happy they are to support a Latinx business and to see a Latinx creator reach No. 1 on Amazon’s Board Games category.

Not all of Millennial Lotería’s redesigns are weighted down in political commentary. There is still plenty of room for a cheekiness that ribs on “millenniality,” such as man buns, the obsession with brunch and going gluten free.

In fact, while "El Gluten" is a card advertised as part of the set (as an ominous skull and crossbones), you’ll be hard pressed to locate one in the actual deck since the game is — as stated — gluten free. And, while the traditional lotería game would be played with beans as game pieces, in this version you’ll enjoy competing against friends with bonafied bitcoins.

The new and improved lotería had almost 10,000 pre-orders on Amazon before its Dec. 4 launch. Alfaro said that millenials in particular “are going crazy over this game.”

Can we give @ariana_nicole16 and @strangecupatea a round of applause for this Halloween costume of our La Feminist card! 👏🏽 👏🏽 👏🏽 #MillennialLoteria

The redesign speaks to issues most poignantly felt by the generation born between 1981 and the mid-1990s.

“[It] could never have been created by someone other than a millennial,” Alfaro said.

To Alfaro, the most important thing is for “Latinx millennials to feel seen and represented. Whether they’re immigrants or third generation Hispanic Americans, I want them to feel represented, and at the end of the day, games are supposed to be fun. So as long as people are laughing, I think I’m happy.”

Kaitlin E. Thomas is a millennial Lecturer of Spanish at Norwich University.