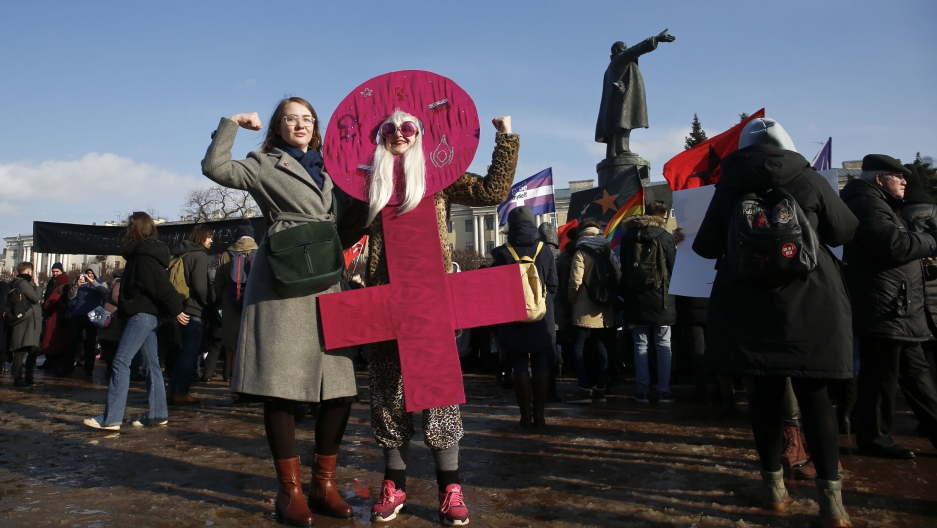 People attend a rally, held to support women's rights and to protest against violence toward women, with a monument to Soviet state founder Vladimir Lenin seen in the background, in St. Petersburg, Russia, on March 8, 2019.

Russian feminists paraded a 13-foot-tall model vagina down the streets of St. Petersburg on May 1, 2018, without getting arrested. It was a big win.

“[Police] arrested only those who they have orders to arrest,” says Leda Garina, director of the Eve's Ribs, a social, artistic, documentary and communication project devoted to the subject of gender discrimination. “But there were no vagina orders, so they didn’t know how to react.”

The giant vagina didn't spark police action in 2018, but participants were not so lucky in 2019. Six Eve's Ribs activists were detained.

In a country where the concept of feminism remains at best socially neutral and at worst a “mortal sin,” activists fighting for gender equality under the banner of feminism have to take success where they can get it. And it's often fleeting. 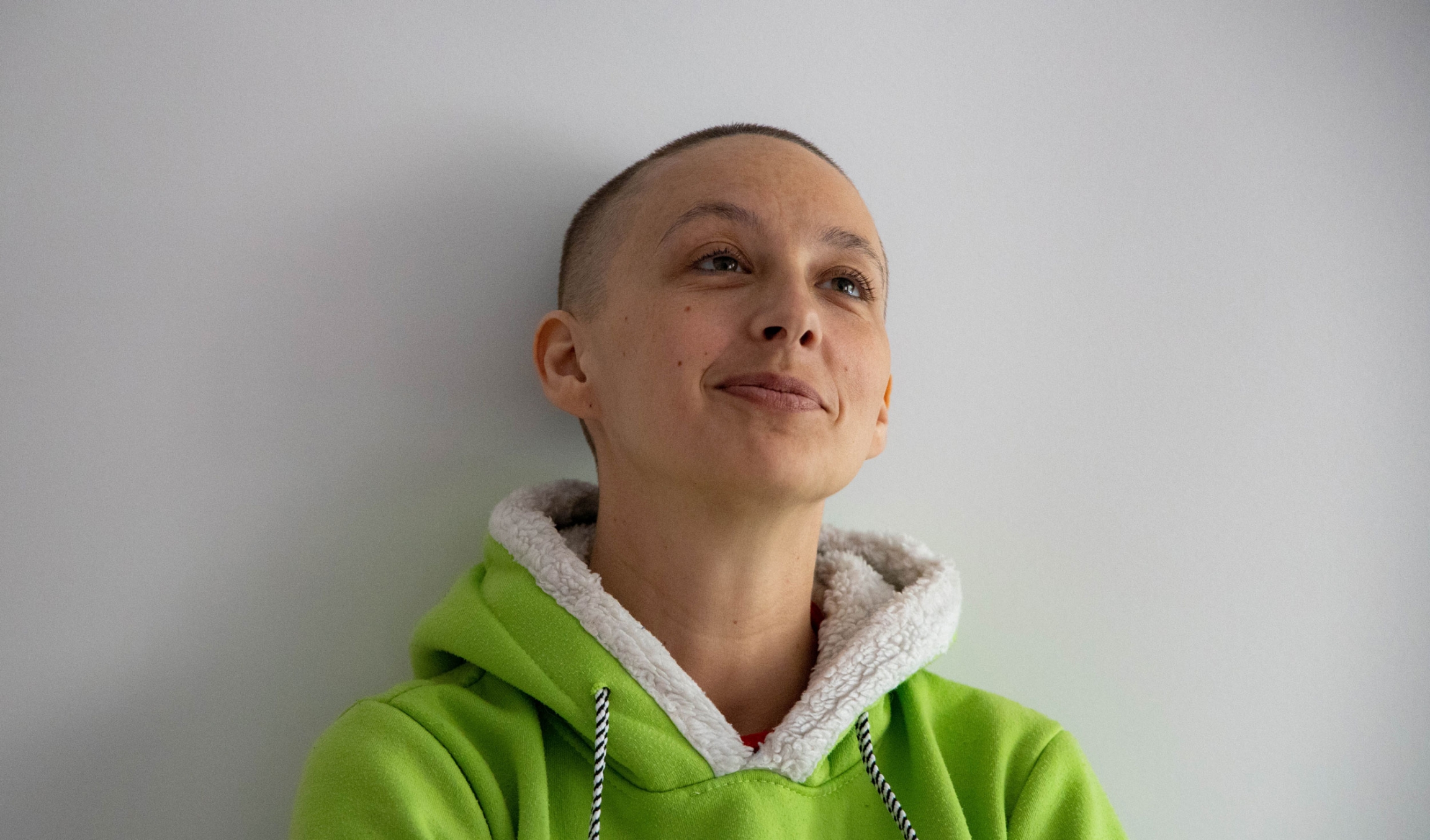 Activists like Garina and other women at Eve's Ribs are working to unite people interested in feminism by bringing them together in a physical space. To that end, they opened Cafe Simona — a women-only workspace by day and event space by night.

“The idea was that here you can feel at ease, because in public spaces in Russia, men always bother you,” Garina says. “Men will always come up and ask, ‘What are you writing, what are you eating, what does it say on your shirt?’ It’s terrible.”

There's a generational shift happening when it comes to feminism in Russia. Millennials and Gen Zers are online — many read English and have been exposed to the fundamental reasoning behind the concept of men and women being born equal. And after decades of repression under the Soviet Union, feminist activism is reemerging in today's Russia.

“Officially, after the [1917 Russian] Revolution, all women’s rights were achieved, so therefore according to the Soviet system, feminism as a movement had no need to exist,” Garina says. 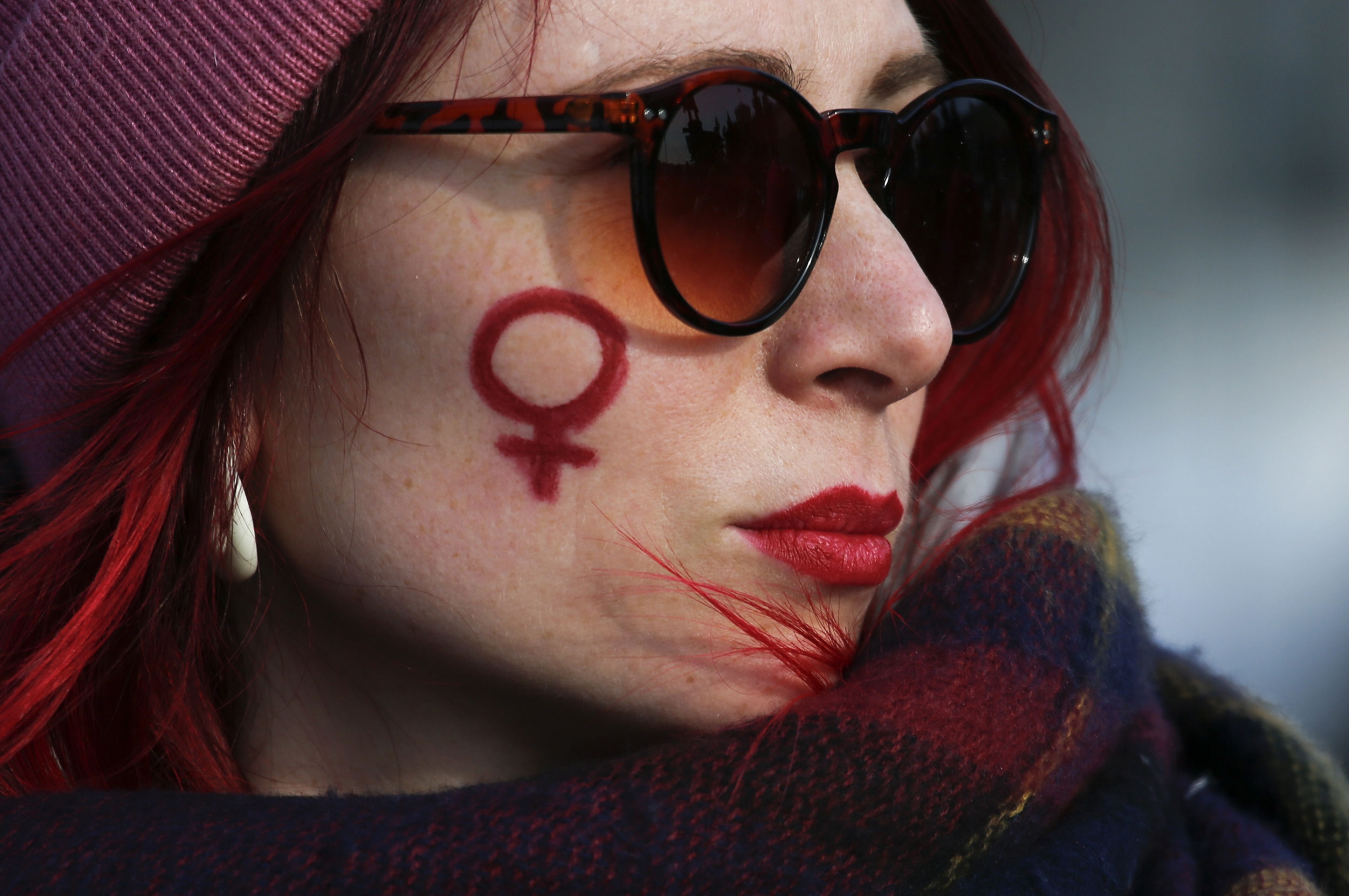 A participant attends a rally, held to support women's rights in St. Petersburg, Russia, on March 8, 2019.

But the ideal of gender equality as espoused in Marxist doctrine was far from reality. Though equality was touted in principle after the Communist revolution and women's education and literacy rates rose, in practice, it looked quite different. Female participation in the labor force was not free of gender gaps and didn't translate into equality in domestic duties. Despite some strides (the Soviet space program had a woman cosmonaut decades before the US did), women were still largely expected to take on work in the home, care for children, and stand in long lines for food in addition to their “equal work” outside the home.

As the USSR was crumbling, feminism began to resurface as a more active movement. But when the Soviet Union did collapse in 1991, women faced new challenges.

“The next problem that women encountered was capitalism. Suddenly there was this new pressure where women became objectified,” Garina says. “This was not the case during the Soviet Union. This meant that women needed to look like super sexualized models in addition to doing all the housework.”

In the post-Soviet years, the main achievements of feminist activists has been “gradual conscious-raising,” pointing to issues that had rarely been in the public discourse previously, such as domestic violence, sexual harassment and discrimination against women and sexual minorities.

But these gains have sustained major blows. In 2017, the Russian State Duma, or lower house of parliament, eased penalties for perpetrators of domestic violence.

“The 2017 amendments symbolized a green light for domestic violence by reducing penalties for perpetrators, made it harder for women to seek prosecution of their abusers, and weakened protections for victims,” according to Human Rights Watch.

Studies suggest that at least one in five women face domestic violence, largely from partner abuse. The vast majority of such incidents go unreported — only about 3% make it to court. The 2017 law — sometimes dubbed the "slapping law” — allows first-time offenders against a partner or a child to be subject to a fine, rather than a criminal charge. It was also supported by the Russian Orthodox Church, which touts “traditional family values.”

The church has been vocally opposed to feminist groups. The band Pussy Riot was famously detained for a rebellious performance in Moscow's Christ the Savior Cathedral, then found guilty of “hooliganism motivated by religious hatred” — directly linked, by the judge, to feminism. 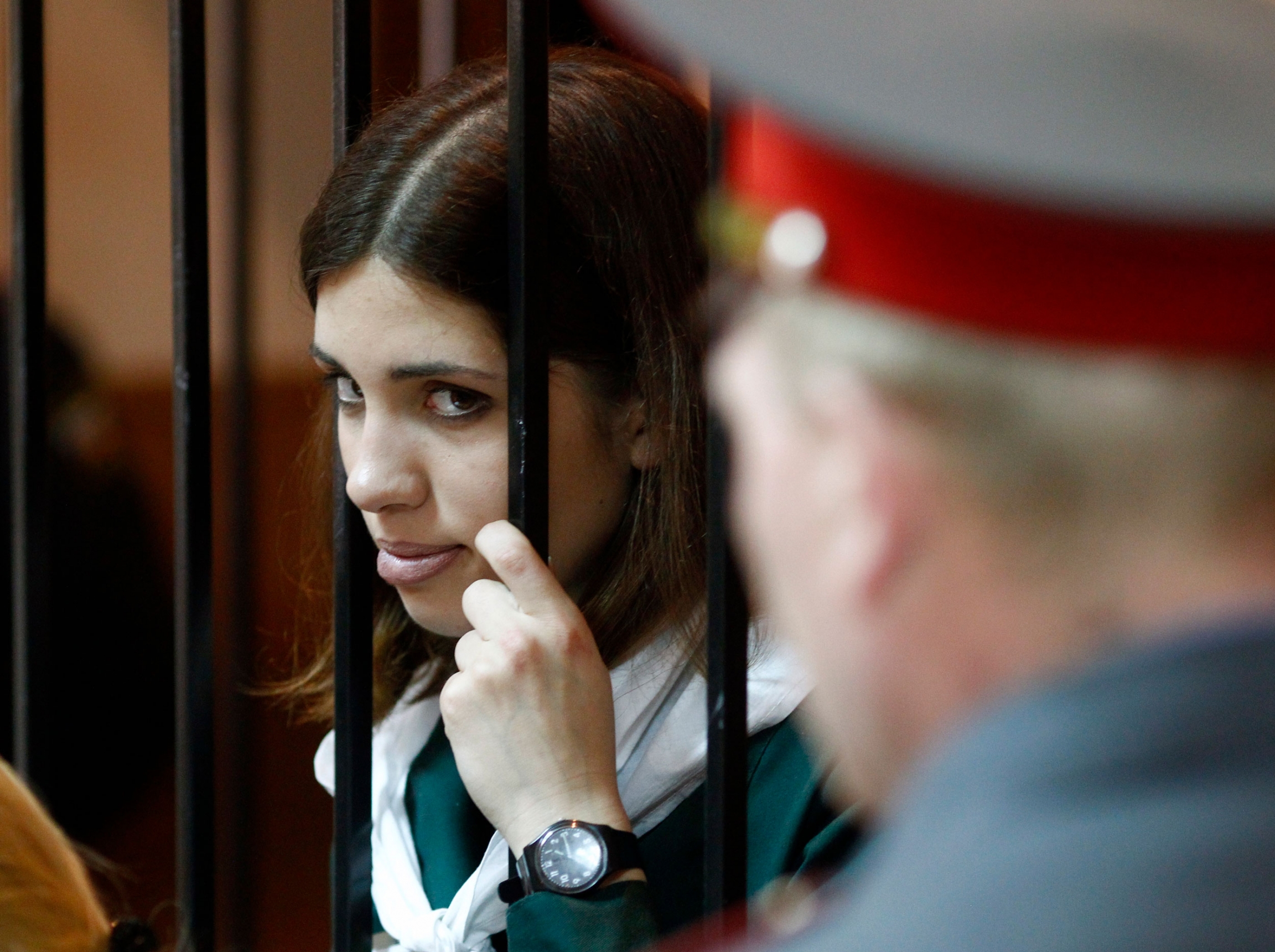 Pussy Riot band member Nadia Tolokonnikova looks out from a holding cell during a court hearing appealing her conviction for hooliganism in April 2013.

Garina of Eve's Ribs has been arrested more than once for her feminist work. But she says it won't deter her.

“My personal goal, as a creative person and as a director, is spread the word about feminism,” she says. “Therefore it needs to be funny, controversial, sexualized, but we can’t just complain. We can always complain about domestic abuse and sexual abuse, but I think that if we don’t show that we can be aggressive, none of our complaints will be heard.”

Another prominent feminist activist, Zalina Marshenkulova, 30, has taken to social media to talk directly to people. Marshenkulova runs “Woman Power” — a channel on Telegram, a popular messaging app in Russia. 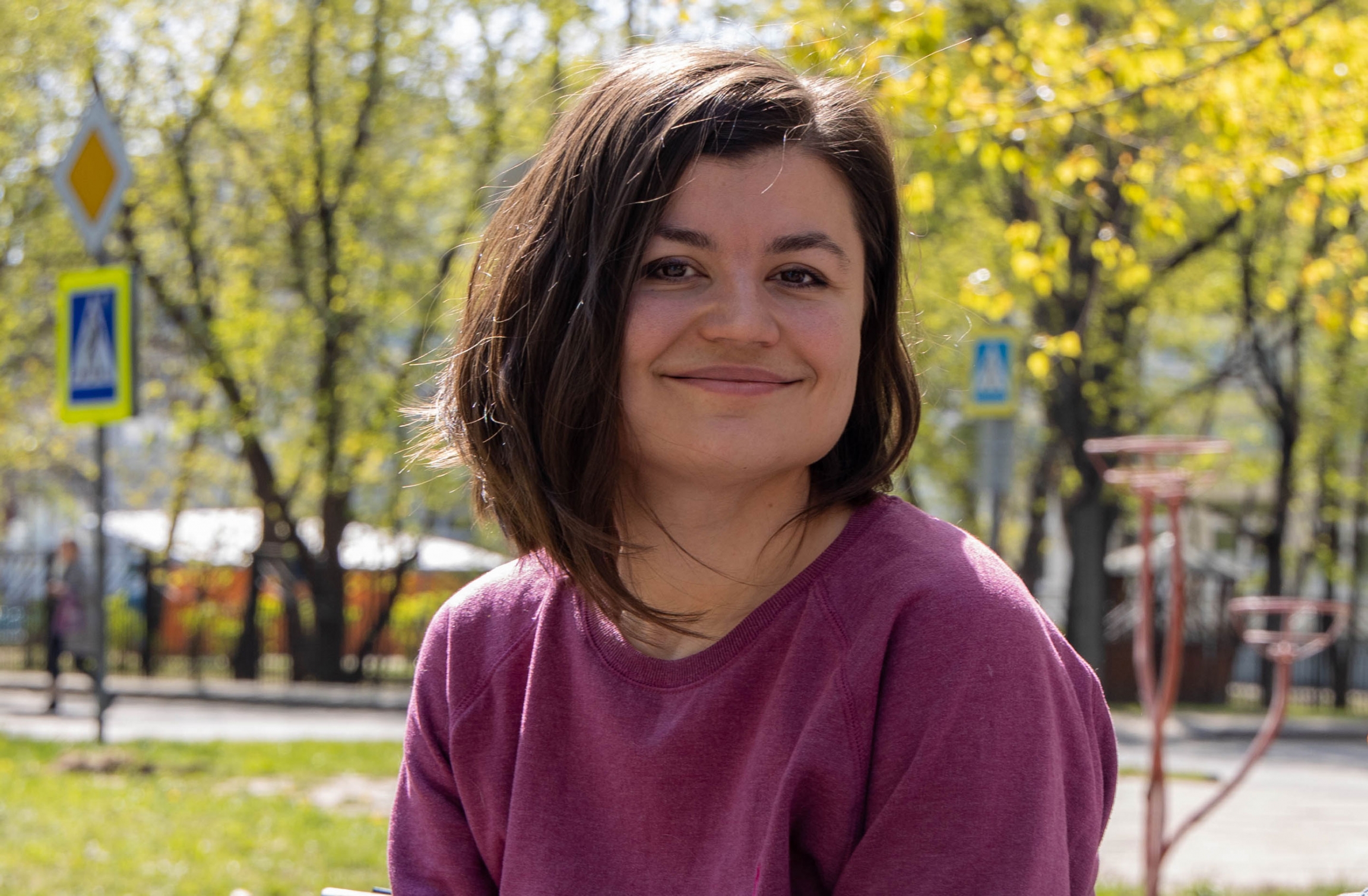 Her goal is to explain feminism to a mainstream Russian audience, but Marshenkulova is also known for a Russian Reebok ad campaign that sparked outrage with this slogan on Instagram:

“Don’t sit around hooked on male approval — sit on a man’s face.”

Reebok deleted the campaign, but later put the images back up, except for the controversial one.

“I think this ad was good for the Russian audience because if this ad were to run in this light, vanilla, Western style, which I don’t like  — something like, 'be strong, women are great' — you know, the stuff you see in European ads, this doesn’t work at all here,” Marshenkulova says. “Basically whining and saying ‘let’s respect women’ — this doesn’t work here. This is not Europe, it’s not America.”

Still, Marshenkulova's frank attitude toward Russian feminism has won her a lot of fans online — including men.

“Yes, I have very many male supporters,” she says. “They understand what I want and they understand the patriarchy kills men too, not only women.”

Marshenkulova, who grew up in a small town in Russia's far north,  says she was raised to “be modest, be quiet,” but it didn't suit her personality.

“Since I was a kid, I’ve always been rowdy,” she says. “I have a strong personality, you can’t shut me up, you can’t tell me my place. My place is wherever I want it to be, so I try to pass this idea along to other women.”

As in politics, going against the status quo in Russia means taking on some risk. “Opinion makers in this country are always in danger,” Marshenkulova says. But change is happening — slowly.

“I think that one of the big victories for feminism happened just in the past two years,” she says. “Now feminists sometimes appear on television, and not too long ago we were completely invisible. It’s a big accomplishment for us that some channels started talking about feminism in a neutral tone as opposed to highly negative tone. In the past, it was all negative.” 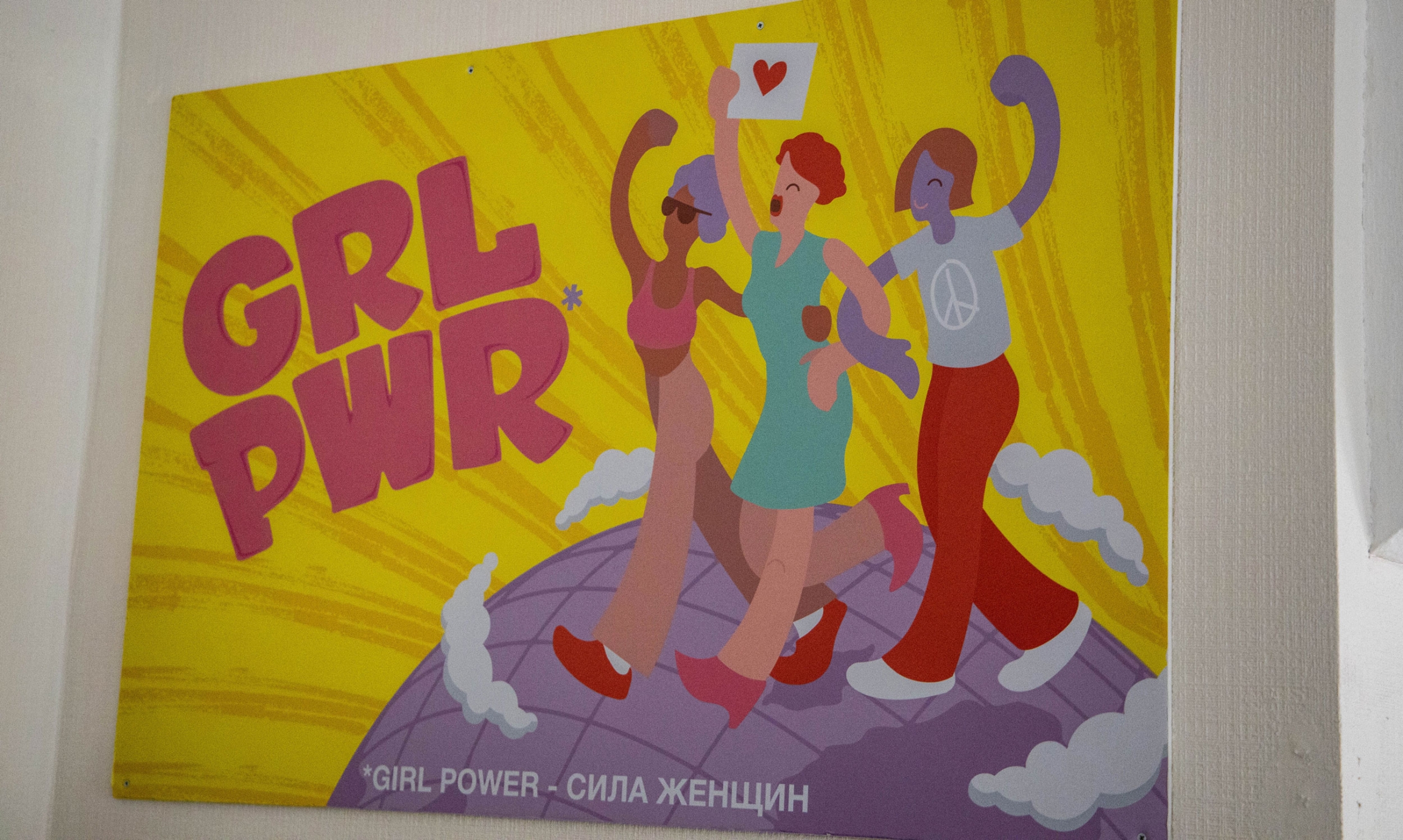 Marshenkulova and Garina take different approaches to feminist activities in Russia, but they agree most activists are largely working toward the same goal.

“Some of them are radical and separatist — they want to work with women exclusively. Others are more liberal,” Garina says. “I believe that all of these movements are important and are moving in one direction because they all influence society. I am willing to work with everyone, women, men, animals, plants, as long as we actually cause some change.”