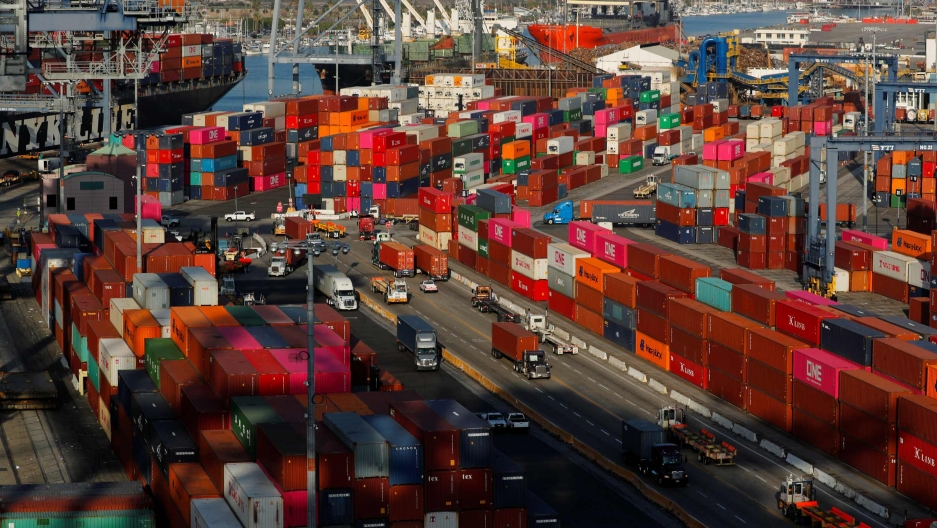 Shipping containers are pictured at Yusen Terminals on Terminal Island at the Port of Los Angeles in Los Angeles, California, on Jan. 30, 2019. Trump announced on Thursday another round of tariffs aimed at China.

US President Donald Trump on Thursday moved to impose a 10% tariff on a remaining $300 billion list of Chinese imports starting Sept. 1, after US and Chinese negotiators failed to kickstart trade talks between the world's two largest economies.

The levies — which would hit a wide swath of consumer goods from cell phones and laptop computers to toys and footwear — ratchet up tensions in a war of tit-for-tat tariffs that have disrupted global supply chains and roiled financial markets for more than a year.

US stocks fell after the news and oil prices plummeted, and further fallout was expected. The IMF has warned that tariffs already in place will shave 0.2% off global economic output in 2020.

Beyond the economic impacts of the tariffs, though, a Chinese American entrepreneur says he feels a chill.

Related: Note to American entrepreneurs: Build in China at your own risk

"The problem we are facing in the Chinese American community is that now the authority has taken a skeptical view of people from China," says Charlie Woo, CEO of Megatoys, an international toy business based in Los Angeles that manufactures products in China and California. "I want to be judged on what I've done and what we do for our community are not where we come from, where parents come from and what our ethnicity is. And unfortunately, I think during this tension, there's a lot of confusion, that a cloud of suspicion hanging over a lot of Chinese Americans' head."

Related: Trump's tariffs cause headaches for his own industry: hotels

Marco Werman: I'd love it if you could give me an example of how that suspicion you're talking about jeopardizes your business.

Charlie Woo: Obviously the trade war has created a problem for my business and I might not be able to employ more workers as I would have liked to. And what I also noticed is that my many friends still in science and technology, I seen them struggling with a fear that they are being monitored, that when we go visit China as tourists or visit family, this country may look at us in a suspicious light — that we might have passed on a trade secret information or technology information unfairly, illegally, to China.

You mean the United States might suspect that of you if you go back home?

Yes. The director of FBI last spring, he testified in the Senate. He made the statement that China is sending spies to steal our technology from our research institutions and universities.

So, you have feet in two worlds. We know that China's government is very sensitive about how it's portrayed on the world stage. Is it hard for Chinese Americans to be openly critical of Beijing? What would be the repercussions for speaking out for you?

We have a different political system and we're sensitive to the government's views on political expressions and all that. We just need to be careful.

How fine a line do you have to walk?

It's the cultural difference. When you share your differences of opinion, sometimes you need to be a little bit careful about exchanging ideas privately and hopefully influence their thinking process that often are more effective than publicly condemning them and to embarrass them.

You do have manufacturing going on in China. You are in the good graces of Beijing, like anyone doing business there. Do you pull punches sometimes?

I wouldn't say that because I believe that my business in China helping their economic growth. I employ workers in China. Obviously, [if] they close the door that would hurt me, but I would not live under the thumb of the government politically.

Right. But as you say, culturally there are differences and you obviously can't say anything you want?

Publicly, you need to be really careful. That's the truth.

Looking at what's been happening in Hong Kong, I mean, it's been riveting to watch from here in the US but has that situation created division or even disputes among people you know here in the US?

In a painful way, yes. I went to high school in Hong Kong and I still keep in touch with my friends we had there, and when I saw the exchanges on the internet — part of it supporting the movement in Hong Kong, other people more inclined to support China's view — and it could get pretty bitter. The protests become very divisive.

How do you see it?

Our value judgment may not apply for their value judgment. I'm sure they look at us, see some of our problems that they want to avoid, and we see their problems and you just have to have constructive dialogues and exchanges and hopefully find some compromise.

Let me go back to something you were speaking about earlier — the suspicion around trade secrets because China we know has stolen US intellectual property, it does have influence operations in the US and academic and economic espionage does happen. How should we balance these real concerns with the threat of racial profiling that you were talking about?

We need to find a fine balance. It's not an easy job. Emotionally sometimes people, you know, governments, decision-makers overreact one way or another. We just need to speak out and caution when policy decision-makers really need to be considerate at the implications of some of their decisions, some of their actions. Of course, when we look back to the McCarthyism and all that and we recognize it, in that we might mistakes the same way that the Japanese American felt that they were unfairly targeted for internment because of the war between Japan and the United States. We need to always remind ourselves that what keeps American great is the core value, the American ideal and without that, we might not be where we are. And it's really important to really keep in mind that diverse interests of Americans.