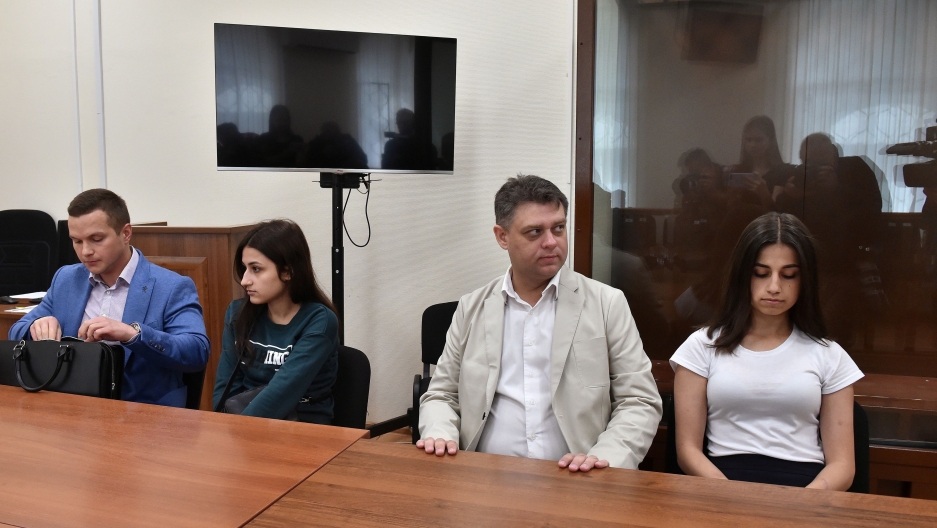 Over the past year, the story of three sisters in Russia now on trial for killing their father has inspired a huge outpouring around the world.

Their case has even been transformed into its own play this month by the Russian performance group, Theater Doc, along with poetry events and protests held in their honor.

The Khachaturyan sisters’ case has also shed light on the plight of domestic violence victims in Russia. If they’re convicted of conspiring to murder as a group, they could face up to 20 years in prison, according to The Straits Times.

Some activists are hoping the case will be dropped, arguing that the girls acted in self-defense.

“This case is very unusual in many respects. This is probably the first domestic [and] sexual violence case that’s gained prominent attention here in Russia. That’s become a rallying cause. This is the first time we’re seeing something like that. Serious public debate about what’s happening.”

“This case is very unusual in many respects,” said Nataliya Vasilyeva, a Moscow correspondent for The Associated Press. “This is probably the first domestic [and] sexual violence case that’s gained prominent attention here in Russia. That’s become a rallying cause. This is the first time we’re seeing something like that. Serious public debate about what’s happening.”

That’s when the sisters had enough. After Khachaturyan dozed off in his armchair, they attacked him with a kitchen knife and a hammer.

The father tried to put up a fight, but died minutes later.

More than 230,000 people signed an online petition calling for the sisters’ release.

After killing their father in their Moscow apartment on the night of July 27, 2018, the Khachaturyan sisters called the police. Initially, they said they killed their father in self-defense when he was attacking them.

The prosecution says that it couldn’t have been self-defense as it wasn’t spontaneous.

But Alena Popova disagrees. She’s advocating to have the sisters released free of all charges.

The investigation has found that they had been subject to years of abuse by their father, including systematic beatings and violent sexual abuse, according to investigators’ documents.

Self-defense comes at a price for women in Russia. Some victims wind up in jail — or worse. According to RIA Novosti, a Russian news agency site, around 12,000 women die every year in Russia due to domestic violence.

Two years ago, conservative groups pressured President Vladimir Putin to sign a law that decriminalized some forms of domestic violence for first-time offenders. Under the new rules, the maximum punishment for someone who beats a member of their own family, causing bleeding or bruising, is a fine of 30,000 rubles ($475).

But Popova and other activists argue that the offense is even lower at 5,000 rubles ($79). She says that in one case she’s written about, a man took a hockey stick and beat his wife. He only had to pay a fine of 5,000 rubles, Popova says, because he didn’t break any of her bones.

Popova has tried to persuade politicians to take the Khachaturyan sisters’ case, and domestic violence in Russia overall, more seriously.

She met with Deputy Tamara Vasilievna Pletneva, the chairwoman of the Family, Women and Children Affairs committee in the State Duma (state parliament) who tells her the same line over and over again: “In Russia, we don’t need laws protecting women against domestic violence because we have a particular relationship with men.”

Popova says she doesn’t know what Pletneva means by this.

The World reached out to Pletneva’s office for comment, but they declined.

Vasilyeva says it’s not unusual for government officials to make these kinds of statements, though.

“People like Pletneva and a couple of other women lawmakers sitting on the Family Affairs Committee are someone who has been professional lawmakers, if I may put it this way, for decades with a history dating back to the Communist Youth. To the Communist Party,” Vasilyeva said. “We’re talking about women who came of age in the ’70s or ’80s, at best. So, this is a completely different mindset.”

To them, domestic violence is a private, family matter. The police treat it that way, too. This is a country where the saying goes: “If he beats you, he loves you.”

According to Vasilyeva, the prosecution hasn’t submitted its official charges to the court yet, but there have already been leaks of evidence. Popova, a lawyer, came across a WhatsApp voice message that she says pushed her to advocate for the sisters.

“On the day of their detainment, a piece of audio was sent my way. An audio message sent to the sisters by their father. And in this message, it was clear that he didn’t see them as his daughters — but as objects, like his property. It was clear from the audio message that they could have had sexual relations.”

“On the day of their detainment, a piece of audio was sent my way. An audio message sent to the sisters by their father. And in this message, it was clear that he didn’t see them as his daughters — but as objects, like his property,” Popova told The World in Russian. “It was clear from the audio message that they could have had sexual relations.”

The father was a veteran of the Soviet war in Afghanistan. According to court filings, he kept a stockpile of knives and guns in their apartment in Moscow.

He beat his daughters, called them “dirty sluts” and sexually abused them.

The young women’s mother, Aurelia Dunduk, fled the family home in 2015. In an interview with the Russian newspaper Novaya Gazeta, last year, she explained that her husband threatened to kill her daughters if she did not leave.

Friends and neighbors of the Khachaturyans would often hear screams from the apartment. They would even see the father beat the sisters.

Over the past year, Mikhail Khachaturyan’s morality and life have been dissected in front of all of Russia to determine whether he was a good person.

Khachaturyan’s nephew, Arsen Khachaturyan, has appeared on Russian TV several times defending his uncle. In one program called “Let Them Talk,” the host asked the nephew if he feels bad for the sisters.

Afterward, the TV audience booed him.

On July 6, activists staged protests in a square in the center of Moscow, holding posters with the tag “I/We are the Khachaturyan sisters.”

Nearby, there were counterprotesters. Like a handful of men standing with posters that read “Killers have no gender” and “Men’s state” — the name of a nationalist movement whose members believe men should dominate society.