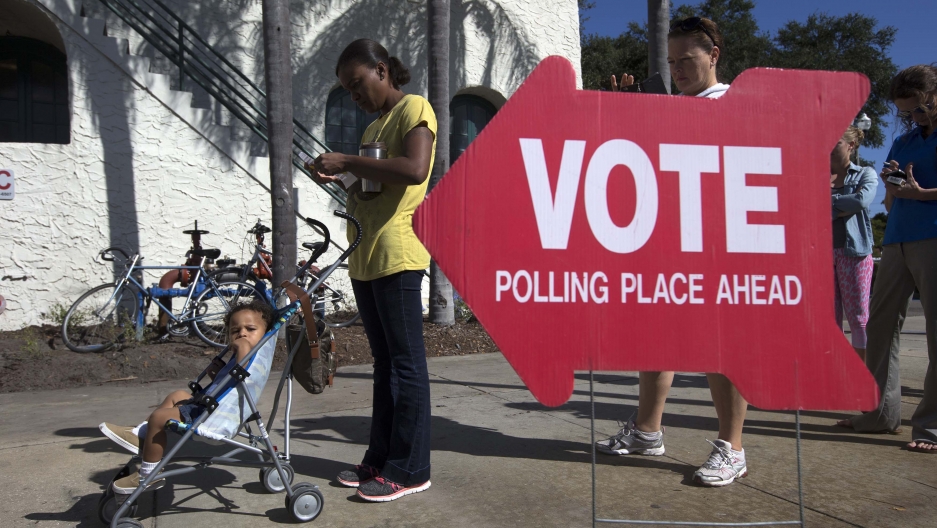 Voters head to the polls during the US presidential election in St. Petersburg, Florida, Nov. 8, 2016.

Much of Wednesday's hearings are expected to focus on United States President Donald Trump's links to Russia and whether he obstructed justice during Mueller's investigation.

But a key issue Mueller detailed in his report is Russian interference in the 2016 US presidential election.

"There were multiple, systematic efforts to interfere in our election. And that allegation deserves the attention of every American,” said Mueller, when he spoke publicly about his investigation in late May.

Jessica Brandt is with the Alliance for Securing Democracy, an organization that tries to prevent foreign meddling in elections in the US and Europe.

She says Russia's efforts in the 2016 election were on two fronts.

Related: How Britain tried to influence the US election in 1940

“We know that Russia's interference primarily operated through two parts,” Brandt told The World. “The first was a social media campaign that pushed content that was designed to polarize and mislead. The second was a set of hacking operations that included, the now very well-known hack and leak campaign on the DNC [Democratic National Convention]. But we also know that Russians targeted election infrastructure, including State Board of Elections' county governments and that they succeeded at intruding in two Florida county election systems.”

“I'm particularly encouraged that last week ODNI — the Office of the Director of National Intelligence — they basically set up a new role for an executive in charge of election threats and asked all the relevant intel agencies to identify a senior lead,” Brandt said. “I just see that as a really important move that will help with prioritizing this threat and improving coordination across the government.”

Related: A brief history of the times the US meddled in others' elections

Brandt says while a number of small positive steps have been taken, here are still significant problems with the US approach.

"...We still need to make sure that there are more resources — not just money but expertise — that gets to the states because states actually run our elections. We should remember that this is not just about 2020, but 2022, 2024 — that the threat is evolving and we need to build long term resilience.”

“There've been a number of measures introduced in Congress, including on a bipartisan basis, that would give more money to the states — the Secure Elections Act is one of them — but none of those things have become law,” Brandt said. “I think the problem is that this doesn't totally add up to a coordinated strategy. We still need to make sure that there are more resources — not just money but expertise — that gets to the states because states actually run our elections. We should remember that this is not just about 2020, but 2022, 2024 — that the threat is evolving and we need to build long term resilience.”

Brandt added that the risk of foreign interference is not limited to the Kremlin.

“We absolutely need to be thinking about who else is getting in the game and what they're learning,” she said. “You know we know that Facebook and Twitter just took down a network of Iran-based accounts not for the first time and that that network included accounts that impersonated US congressional candidates again in the midterms, that impersonated legitimate news outlets and tried to co-opt journalists. And I think the important thing to remember is that this shows that foreign interference operations are not always tied to elections and that the problem extends beyond Russia.”

State of elections in Florida

Florida is a swing state with significant Electoral College power. This makes it a big target for parties seeking to disrupt US elections.

During the 2016 elections, Russian government hackers accessed voter registration databases in two Florida counties, but, as far as officials can tell, hackers did not tamper with vote tallies or voter information that year.

As the 2020 election approaches, the problem of keeping hackers out of election systems is all-consuming for Paul Lux, who oversees elections in Florida's Okaloosa County.

“If I tell you what we're doing precisely to secure our elections, I'm therefore making elections less secure by putting that information out."

“You know, we have a lot of different things that are going on — much of which we cannot talk about for quite obvious reasons,” Lux said. “If I tell you what we're doing precisely to secure our elections, I'm therefore making elections less secure by putting that information out."

One step in safeguarding Florida's election networks and systems for 2020, Lux said, is unifying all of the state's counties on the same intrusion detection system.

Related: Timeline: Big moments in Mueller investigation of Russian meddling in 2016 US election

“When all of the data from all 67 counties are being reported to the same source and that source says, 'Woah, hold on one minute, IP address 1234 tried to hit 12 counties in the Florida Panhandle, all within five minutes of each other' — now we have an event people need to be paying attention to,” Lux said. “And we can send out alerts, we can make phone calls and we can say 'everybody, be on the alert, block these IP addresses, do this, do that, to make sure your systems aren't being compromised.'"

All of Florida's counties are now equipped with an intrusion detection system. Florida is also one of the first states to have all of their counties signed up with one or more alert and information sharing systems through the nonprofit Center for Internet Security.

Lux says all of these efforts are keeping cybersecurity at the forefront for local election officials.

“We actually had classes [where] we sat down with people from the Department of Homeland Security,” he explained. “And they basically gave us what I could call cybersecurity 101. The good news for me is that I was actually in the intelligence and security command when I was in the military. So my learning curve has been a little less steep.”

Lux says that intelligence-sharing among federal agencies should also be improved and that a mechanism to share classified information with election officials should be instituted.

“I'm not saying I need to be on the president's security briefing every morning,” he said. “But when something is happening to the election world, when counties are being compromised in Florida, it would be nice for us to be on the receiving end of those notifications specifically so that we would know if we needed to take action what our best steps were, beyond the anonymous notifications that we're getting.”