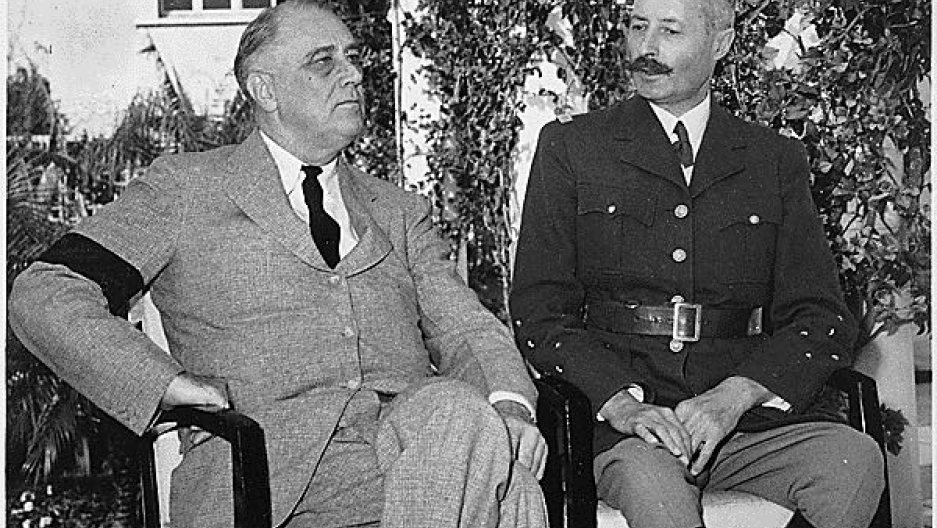 Plenty of Americans are concerned, to put it mildly, about the alleged Russian attempt to influence the presidential election here last year. But it might surprise many Americans to learn that this is not the first time a foreign power has tried to sway a US election. Apparently, the Brits and the Germans both tried to influence the campaign in 1940. The story was first flagged by Politico.

The US intelligence community has concluded, with a high degree of confidence, that Russia acted to damage Hillary Clinton and help President-elect Donald Trump. They hacked the DNC to obtain dirt; they planted stories; and they invented fake news, to help sway opinion. US intelligence agencies described it as a "classic influence campaign."

In many ways, the British campaign in 1940 has become the model for that kind of classic influence campaign.

The goal was to try to change US public opinion and to manipulate America’s political establishment toward helping Britain in its fight against the Nazis. In 1940, this was no sure thing. Incumbent Franklin D. Roosevelt wanted to help the UK but faced an uphill battle to overcome isolationist and “America First” views.

Both London and Berlin knew that only US intervention could change the course of the war in the UK's favor. So both nations set out to influence the US election. Churchill had just become prime minister in May 1940, and he hired freelance agent William Stephenson to head up the new North American operation. Stephenson was a Canadian, a war hero, a brilliant inventor and a wealthy and well-connected industrialist. He set up shop on June 21, 1940, at Rockefeller Center in New York City. Room 3603 became headquarters of an organization he christened “British Security Coordination.”

Within days, Stephenson scored a major victory at the Republican Party convention in Philadelphia.

The Brits obviously liked FDR, since he was already campaigning to increase assistance to the UK. But just to hedge their bets, the Brits tried to get a like-minded individual in as the Republican nominee.

The only GOP candidate with a pro-British agenda was one Wendell Willkie, from Indiana. He went into the convention as a decided underdog.

Then a poll came out from a polling organization called Market Analysis, Inc. It said that 60 percent of delegates favored helping the UK. The findings were published by the New York Herald, and an influential syndicated columnist, William Allen White, wrote that it was now clear the other candidates were out of touch with the party’s grassroots. Willkie won the nomination, to the astonishment of the party and the country.

Decades after the war, it was revealed that Market Analysis, Inc., was a British creation.

Dirty tricks and fake news were employed to discredit individual congressmen, like the prominent isolationist Hamilton Fish of New York. According to an official history, the goal was to "put the fear of God into every isolationist senator and congressman in the country." They funded his opponents; published pamphlets suggesting he was pro-Hitler; released a false photo of Fish with the head of the pro-Nazi German American Bund; and they planted stories saying he was getting financial aid from German agents. The British sustained the effort till he was finally beaten in 1944. Fish blamed the smear campaign on Moscow.

Stephenson’s agents also wiretapped the French embassy and used honey traps to get intelligence from French diplomats about pro-German activities, and stories were then planted in the press.

The German campaign was less successful. Stephenson’s agents found proof that the Nazis were funding America First, the leading isolationist group, with ties to white supremacists. This information was used to discredit the isolationists.

After the war, as British Security Coordination faced being disbanded, Stephenson commissioned an official history to be written, to prevent its achievements being consigned to oblivion. This was a semistandard practice for covert British operations, as a kind of "lessons learned" exercise.

Former agents wrote the history — including Roald Dahl, who went on to write children’s books.

"The Secret History of British Intelligence in the Americas, 1940-45" was declassified in 1999, and you can get a copy from your usual online bookstores. You can cross-check parts of it with other documents in the UK National Archives, and in memoirs from other participants and interviews they've given over the years. One memoir was actually titled "You Only Live Once." Another former agent, Ian Fleming, took to writing. Actor Noel Coward is also believed to have been recruited by British intelligence.

So did it work? The jury is still out. Apart from getting lucky with the Republican nomination, the Brits failed to push Congress over the edge. The interventionists did secure some narrow votes in Congress to send material aid to the UK, votes that really pushed the envelope of America’s neutrality laws.

But Congress remained strongly anti-war until the day Japan attacked Pearl Harbor. Even then, there was little support for a war in Europe until Hitler declared war on the United States on Dec. 11, 1941.