At 7 in the morning every weekday, 10-year-old Victor Hugo B. Azevedo Silva has to be inside a building surrounded by a fence and guards. He stands straight, looking forward and wearing a white shirt and blue jeans, like everyone else. Along with the other boys, Victor’s hair is cropped short. The girls have their hair pulled back.

“Formation,” Victor explained in Portuguese, “this is when everyone lines up before they go to class.”

A police officer stands in front of them, issuing orders. There’s a gun on his hip.

Another officer is in the atrium for formation while others guard the school entrances and stroll through the hallways.

“Now's better. Before we didn't even have police. In the past, it was bad. There was a lot of crime.”

“Now's better. Before we didn't even have police,” Victor said about his school, Centro Educacional 01 da Estrutural, in Brasília. “In the past, it was bad. There was a lot of crime.”

And, like a lot of Brazilian parents, Victor’s mother, Maria Paulina da Silva, is worried about her son’s safety. She’s a hairdresser. 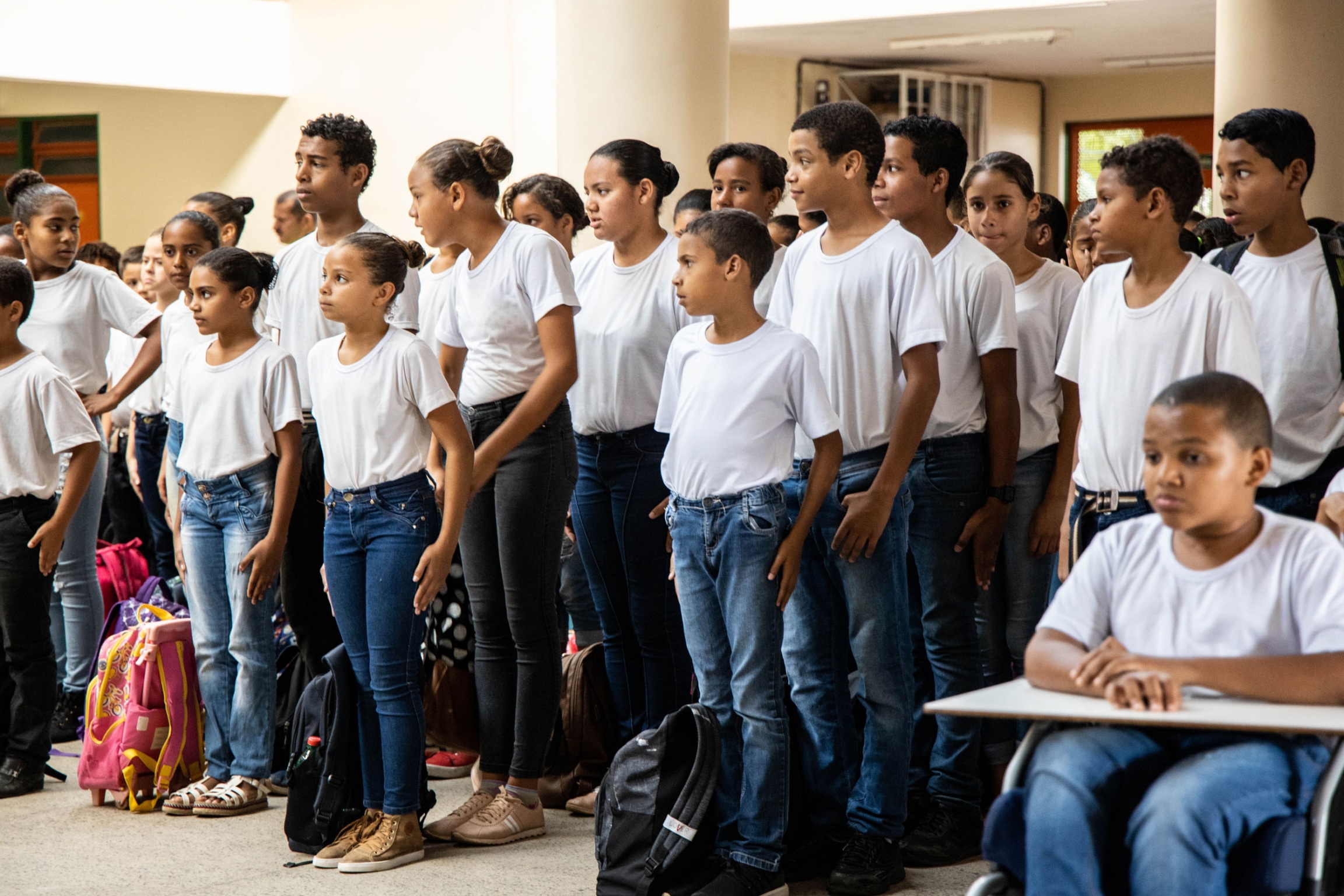 Students at Centro Educacional 01 da Estrutural, in Brasília, Brazil, line up for inspection before classes start. Their hair has to be short or pulled back, and they all wear a uniform of jeans and white T-shirts.
Credit:

“I’ve had great experiences with the military police of Brasília,” she said. “So, it does not bother me that police officers here are armed.”

Schools like this one, where officers carry guns, have come to symbolize the battle over education in Brazil. President Jair Bolsonaro has said he wants to bring more armed police officers into schools across Brazil. Most schools don’t have a police presence, and he claims that having officers on the premises is a major deterrent to crime. He’s also tried to cut federal education budget by a third, and he’s supported a conservative movement that targets liberal teachers. Critics worry Bolsonaro is trying to impose his own values on the nation’s public school students by exploiting people’s desperation for safety.

And violence is a big issue in Brazil. Four months ago, two young men inspired by the 1999 Columbine, Colorado, shooters in the US armed themselves with guns, crossbows and axes. They killed seven people at the school they used to go to in a São Paulo suburb. That incident has made many more Brazilian parents more accepting of armed officers in schools. 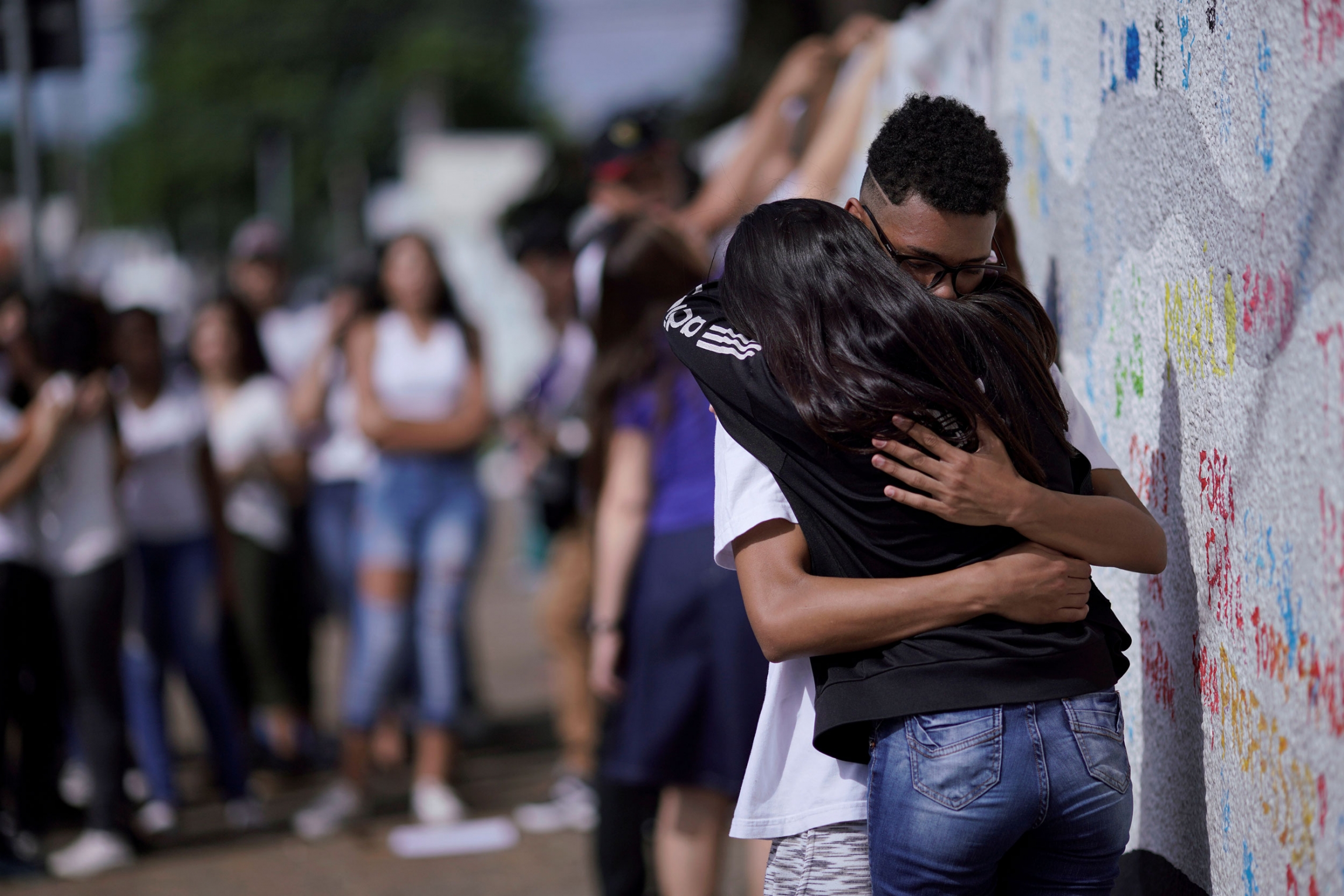 Students cry during a tribute to victims of the shooting at the Raul Brasil school in Suzano, Brazil, March 19, 2019.

Victor’s school is part of a larger program aimed at reducing crime in neighborhoods, said David Nogueira, who’s with the state of Brasília’s education department.

“These schools were chosen because they are situated in violent areas,” he said.

There used to be assaults and thefts in and around Victor’s school and even an attack on a teacher. Today, they say, the school is safe.

Nogueira said local school officials talked with police representatives for two years before officers were invited on campus this past January, the same month Bolsonaro took office. Yet, when Bolsonaro championed these schools, they became associated with him, Nogueira said. News stories often called them “military schools.”

“So, we don't call them military schools,” Nogueira said. “And there is a difference, actually.”

The difference is that students aren’t being prepared to join the military. This is a civilian school. Nogueira insists that officers deal with discipline only and have no control over the curriculum. Still, a lot of Brazilians are skeptical.

“Sometimes, people get [scared] when you say that we have a partnership with the police. I think that in order to understand that, you have to understand the history of Brazil.”

“Sometimes, people get [scared] when you say that we have a partnership with the police,” Nogueira said. “I think that in order to understand that, you have to understand the history of Brazil.” 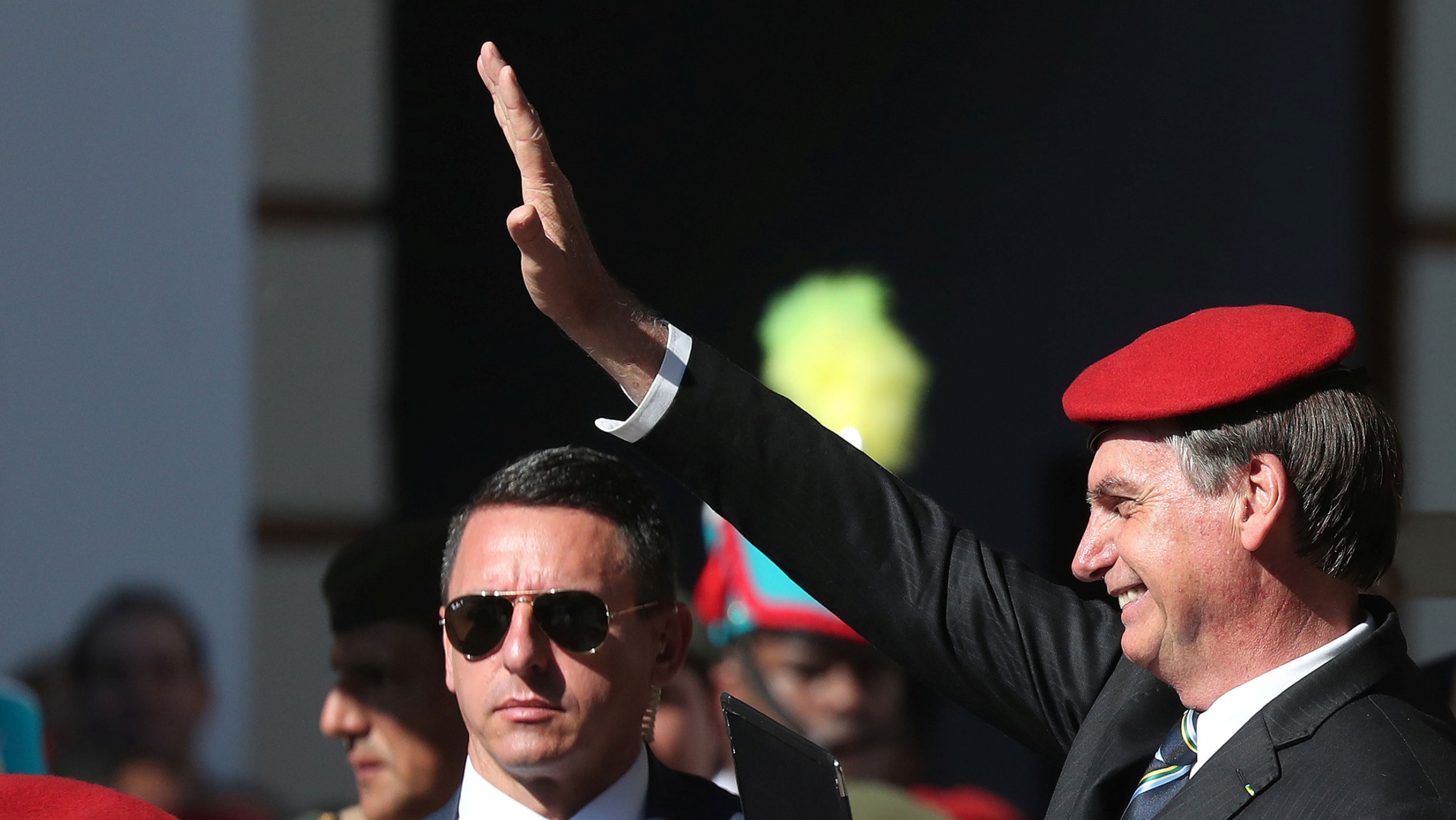 Brazilian President Jair Bolsonaro wears a red beret as he attends a ceremony to celebrate the 130th anniversary of the Military School in Rio de Janeiro, Brazil, May 6, 2019.

Just 35 years ago, Brazil was a military dictatorship, supported by the US in the name of fighting communism. During that time, thousands of dissidents were tortured and hundreds were killed.

Bolsonaro was in the armed forces during the dictatorship and ever since, has defended that regime. He’s suggested revamping school history books to portray the dictatorship in a more positive light. Not just in quasi-military schools, but in all schools.

“There was a consensus in Brazilian society — [people] understood the military dictatorship was ... a regime based on torture — and ... it should be condemned,” said Pablo Ortellado, a professor of public policy at the University of São Paulo. “And now, there is a way of revising that.”

Ortellado said Bolsonaro’s trying to fundamentally shift public attitudes in part by silencing teachers. Bolsonaro’s backing a movement of conservative parents who complain that educators are teaching revolutionary ideas like the philosophy of Karl Marx.

“This is basically a conspiracy theory. There is no systematic review of the curricula pointing to that. There is not a survey with teachers saying that they are left-wing. This is just an assumption, which is based on nothing as far as I can see.”

“This is basically a conspiracy theory,” Ortellado said. “There is no systematic review of the curricula pointing to that. There is not a survey with teachers saying that they are left-wing. This is just an assumption, which is based on nothing as far as I can see.”

The conservative parents’ movement encouraged students to record their teachers saying left-wing things. Some students did, and teachers have gotten fired as a result.

“I think you already have now a feeling of censorship in the classroom,” Ortellado said. “It's affecting the teaching of some things [the conservative movement considers] Marxism, like defending human rights, defending the rights of women and minorities. … There is already a lot of battle in the classroom around those issues and [they] are going to be harder and harder, like in the US.”

Bolsonaro’s other move, to dramatically cut the federal education budget, was met by protests by thousands of students and teachers across Brazil in May 2019.

The cuts are “especially significant in a country with so many illiterate people, so many people who do not finish high school or even have a basic education,” Cláudio Antunes, a spokesman for a teachers union in Brasília, said in Portuguese.

Teachers have long championed education as a building block of Brazil’s diverse democracy. Antunes says these schools with armed police officers don’t embrace inclusion and self-expression, and parents and students are trading those things for safety.

“Democracy today is being questioned, all the time. And we do not know what’s going to prevail — the type of democracy we built after the [1964 military] coup, or what we have now — this environment of fear and of suppression, of cultural inclusivity.”

“Democracy today is being questioned, all the time,” he said. “And we do not know what’s going to prevail — the type of democracy we built after the [1964 military] coup, or what we have now — this environment of fear and of suppression, of cultural inclusivity.” 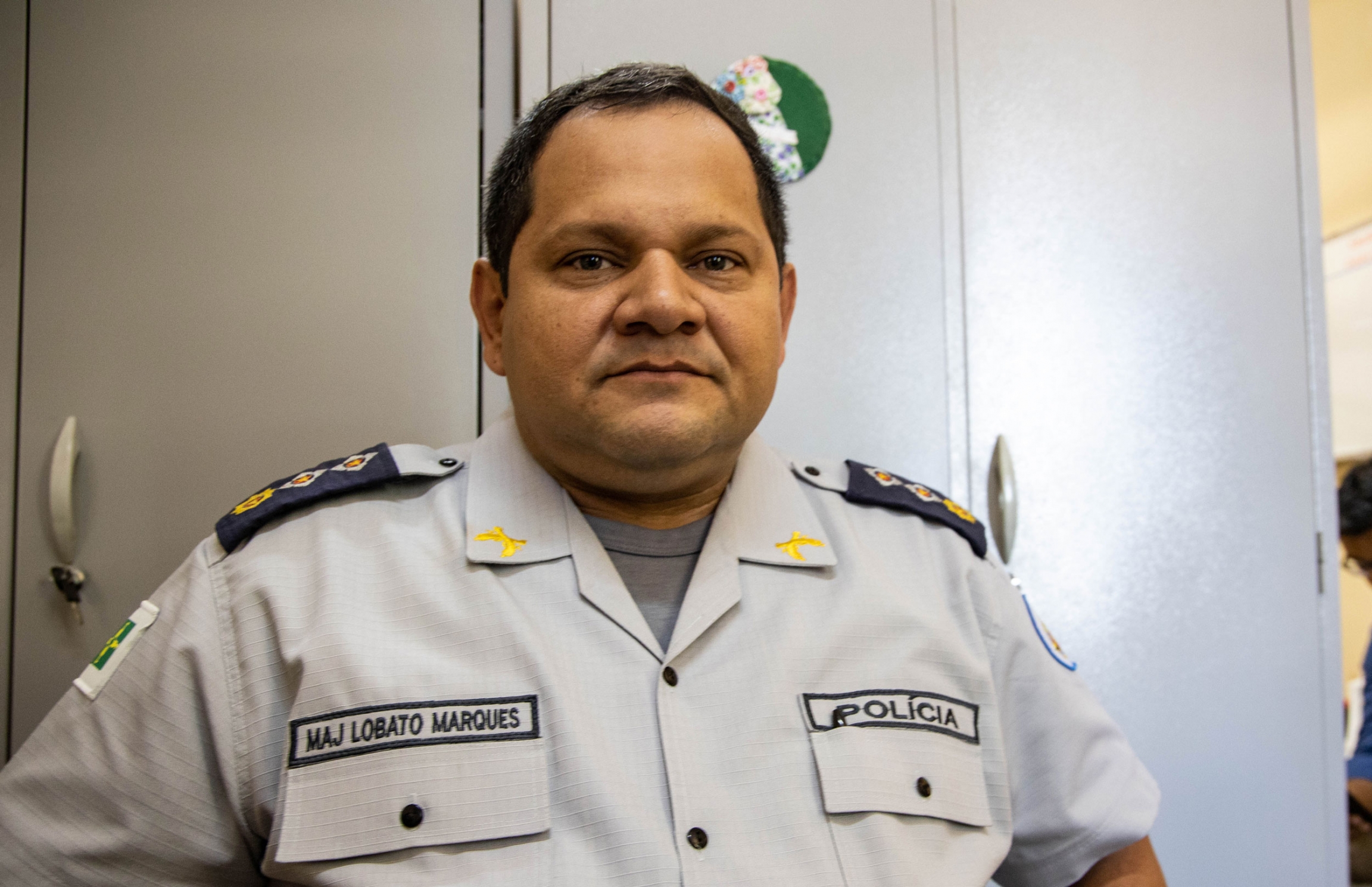 Police officer Roberto Lobato Marques says students at Centro Educacional 01 da Estrutural can only learn if they feel safe, and he helps provide that environment.

But at the school in Brasília, police officer Roberto Lobato Marques says the children in his care have immediate, desperate needs.

“Some of the kids can't even wash their school uniforms at night because they don't have enough water at home,” he said.

Marquez said he’s been an officer for 17 years, and the partnership between the school and police is the first thing he’s seen effectively cut down crime in the area.

“You can transform society,” he said. “If you have a means of reforming it from the inside of an institution, you can do it. It’s much more difficult from the outside.”

Now, Marquez says, students here have an oasis where they can live a normal life, learn what’s right and wrong, and how to be good citizens.